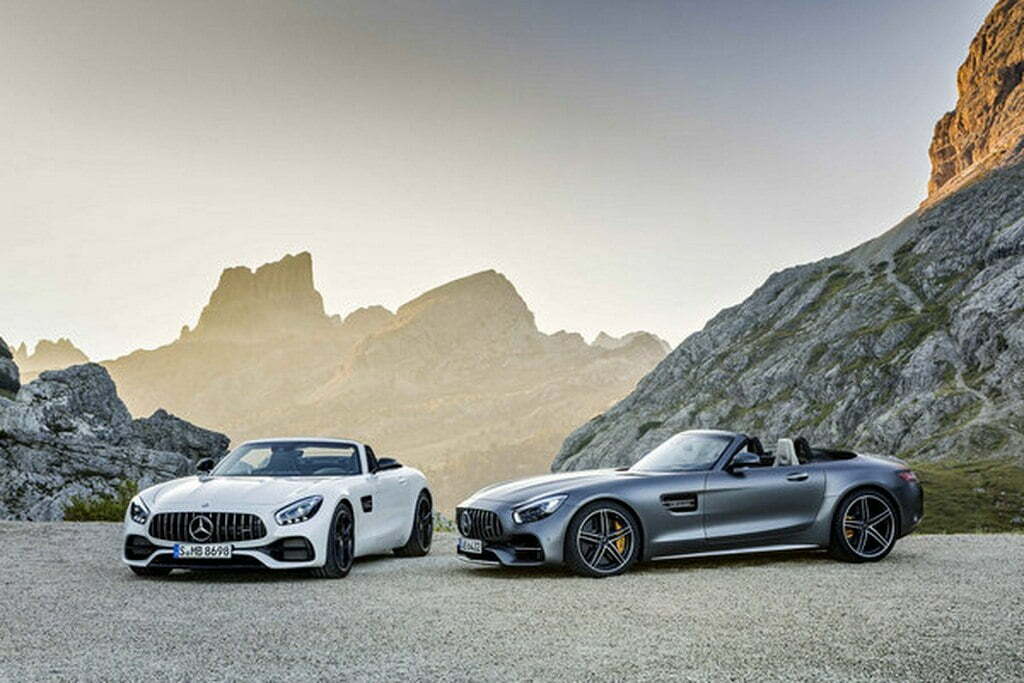 We thought that your regular Mercedes AMG GT was a thoroughly entertaining car, then be rest assured that he newly unveiled Mercedes AMG GT C Roadster and the GT Roadster have taken the core badass-ness of the car to higher levels, albeit in a more revealing topless form. The new soft-top GT sports cars are based on the current AMG GT meaning the same 4.0-litre twin-turbo V8, seven-speed dual-clutch automatic and rear-wheel-drive layout is present.

This should mean utterly bonkers level of performance everywhere in the power band for the soft tops. Mercedes-AMG were so keen to push their GT family further that the new GT C Roadster received much of the AMG GT R’s performance oriented components signaling towards a rather spectacular soft top roadster. The power numbers for the GT C Roadster are nothing short of mind-blowing with 549 bhp on tap. This much power means that the GT C roadster can do a 0-60 mph run in just 3.7 seconds and blitz to a top whack of 196 mph. The GT Roadster on the other hand is slightly saner with its 4.0 second time of 0-60 mph; however, it also happily runs away to the top speed of 196 mph.

Other technical bits include a a wider rear profile than the standard roadster while an AMG performance exhaust takes care of aural symphony as standard. The cars also get the electronic differential as standard and so does the R’s rear-wheel steering system. Should you choose to get closer to the elements, the soft top folds in 11 seconds and this feat can be achieved at speeds as high as 50 mph.

The colours in which you can order these stunning topless Mercedes-AMG roadsters soft top are black, red and beige, while there are 11 exterior and 10 interior colors in the offering a well. Prices are yet to be declared for thes two new Mercedes-AMG GT roadsters, however much more is expected to come out about the cars at the 2016 Paris Motor Show later this month. Till then droll over these gorgeous pictures of the twins.