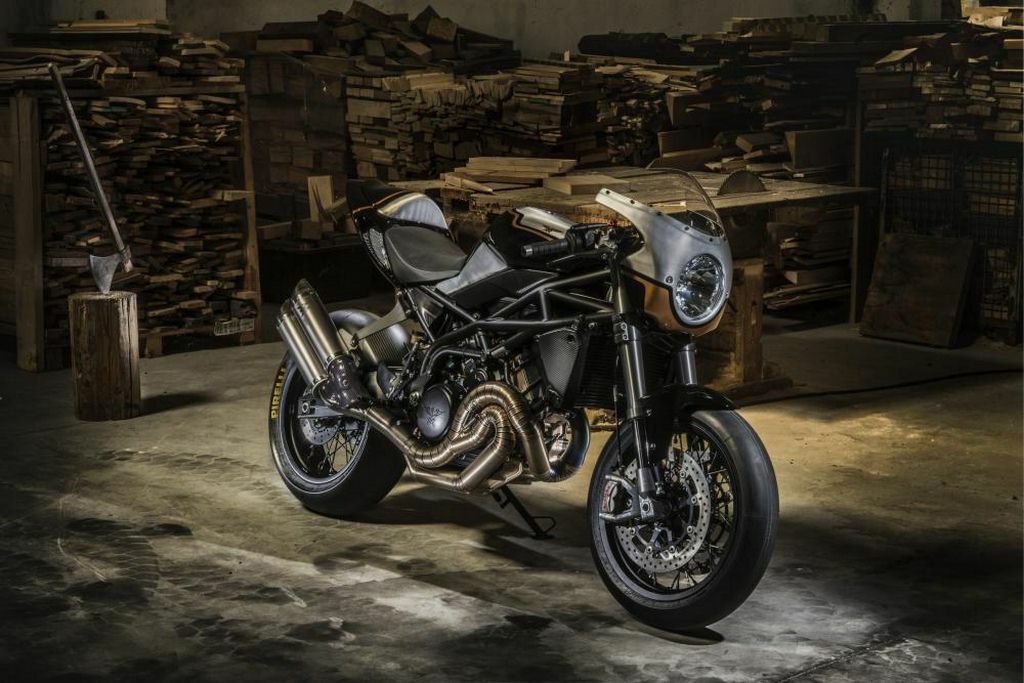 Italian two wheeler auto manufacturer Morini have just taken wraps off their two new products the Corsaro Ti22 and the Milano which are undoubtedly very good looking motorcycles. First things first, talking about the freshly revealed 2017 Morini Corsaro Ti22, the automaker has come with something very new and unique in style. Moroni has completely overhauled the bike and guess what! it just gets better.

Morini claims that the design has now been changed. With its classic looks the invincible and fearless nature of the motorcycle is still one of the major characteristic that the Italians have still restrained with the new model. Keeping its traditional values in tact, a classy round headlight replaces the dual projector headlights which were seen on the previous model the Corsaro ZZ.

The light is now fitted in a small aluminium fairing which is completely hand beaten and molded accordingly to take that particular retro shape. The Fuel tank and seat cowl are also made up from aluminium. The bike has been completely modernized with small touches of freshness just as the double M logo beneath the full color dash. The Forged wheels from the Corsera ZZ have been replaced by the wire-spoked wheels, which are fitted with uptown Pirelli Superbike tyres. The engine and Brembo brakes have remained the same. The motor still generated 139 bhp and brake and clutch levers have now been restored by carbon fibre items.

Alongside the new Corsaro Ti22, Moto Morino have also revealed the Milano retro classic motorcycle. The Milano draws it power from a 1187 cc, V twin Bialbero Corsa Corta engine. The engine has now been altered for offering a more relaxed ride and is pretty good for churning out 110 bhp. The power figure has been detuned from the 139 bhp Corsaro ZZ. Talking about the looks the bike looks well in shape and to be honest we have fallen in love with its looks. The round headlamps, single saddle and the glossy paint scheme just blends into the motorbike.

The Moto Morini Milano sits on a trellis frame, which has now been revised to deliver better handling. The swing arm is now single sided that has been linked to the forged aluminium wheel at the rear. The classy cafe racer gets a twin pot exhaust unit which not only looks good but will sound good too. The suspension on the Milano composes of adjustable forks up front that have been made from a solid block along with a fully adjustable monoshock at the rear.

Braking duties of the Miano are carried out by a twin 320 mm disc brake at the front along with a single 220 mm disc brake at the rear. These discs come linked via a Bosch 9.1 MP ABS to offer decent and flawless braking. The ABS can also be switched off. The typical looking Milano also carries a five-inch display upfront providing the rider with all the information needed while riding.