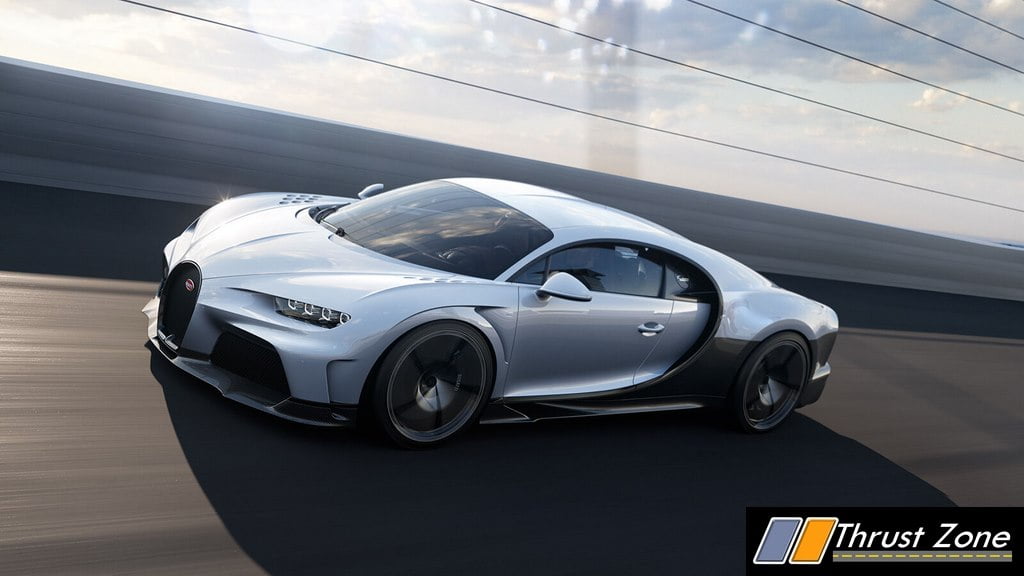 With a low-slung front, special aerodynamic shape at the sides and an extended rear for peak performance, it is clear at first sight that the new Bugatti Chiron Super Sport 1 has been designed without compromise for optimal aerodynamic performance. Bugatti engineers developed the new hyper sports car for top speed while fully embracing both luxury and comfort. The Chiron Super Sport embodies a part of Bugatti’s broad spectrum of performance – a counterpart to the Chiron Pur Sport3, which was made for cornering and lateral agility.

Bugatti developed a new vehicle design with optimized aerodynamics for the Chiron Super Sport’s streamlined bodywork. The new Chiron Super Sport is an uncompromising reincarnation of the Bugatti design mantra, ‘form follows performance’. From the front splitter to the rear diffuser, every centimeter of its skin is designed for top speed.

At speeds over 420 km/h, a vehicle must offer sufficient downforce alongside minimal drag. The Chiron Super Sport’s extended rear, which is known as a long tail, gives it new proportions and very distinctive aesthetics. An optional, new, horizontal color split visually extends the proportions of the Chiron Super Sport even further, making the hyper sports car appear even lower.

For aerodynamic performance, the rear has grown by approximately 25 centimeters to hold the laminar flow to the bodywork for as long as possible. Bugatti designers also enlarged the diffuser cross-section, pushing the diffuser’s trailing edge higher and thereby reducing the rear’s trailing surface by 44 percent. As a result, the slipstream and wind resistance generated are significantly reduced – factors which otherwise decelerate the vehicle. A welcome benefit of these technical modifications is that the rear is afforded even better proportions and is both wider and lower-slung. The long tail helps to keep the laminar air flow attached to the body for as long as possible.

Even from afar, the Chiron Super Sport is unmistakable due to its repositioned tailpipe configuration. To boost the effect of the diffuser and give it more space, Bugatti has shifted the otherwise central exhaust system to the side, with the pipes aligned vertically. The exhaust system also sounds deeper and richer. 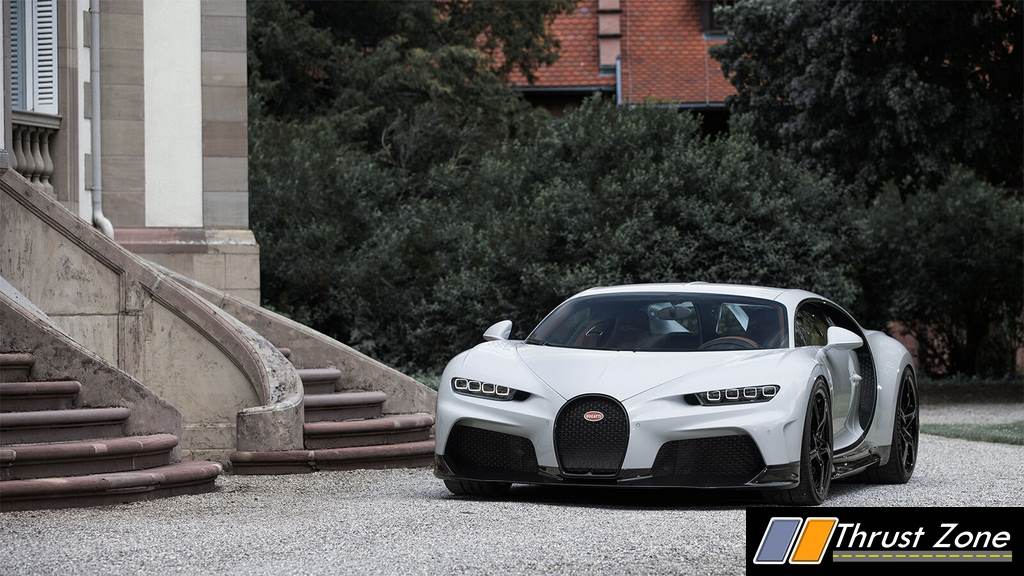 The front therefore has to be perfect, too, to achieve seamless airflow over the bodywork. On the Chiron Super Sport, features like side air curtains alongside the air intakes result in improved airflow from the front to the wheel arches, keeping it as close to the side of the vehicle. The new, focused facial expression with inclined headlamps and the modern design language fit perfectly with the aggressive character of the Chiron Super Sport.

The nine exhaust air holes on each fender are more than just a nod to the Bugatti EB 110 Super Sport – they also serve to release the air pressure from the front wheel wells, thereby generating streamlined downforce at the front axle. Additional outlets behind the front wheel arches likewise help to balance out the aerodynamic loads.

For even greater exclusivity, new aluminum wheels in a five-Y-spoke design are available only for the Chiron Super Sport. These new Super Sport wheels are also available in a diamond-cut option. The Chiron Pur Sport’s iconic magnesium wheels, which further reduce the weight of the unsprung mass, are also available as an option.

The interior is a combination of timeless elegance and comfort beyond compare. It is a blend of natural elements like leather and polished aluminum, together with high-tech carbon fiber applications. This is an interior perfectly suited to high-speed continental trips.

With a strong focus on technical maxims during development, the demands made of the new hyper sports car are exacting. Even at top speeds of up to 440 km/h, it must be effortless and safe to control. 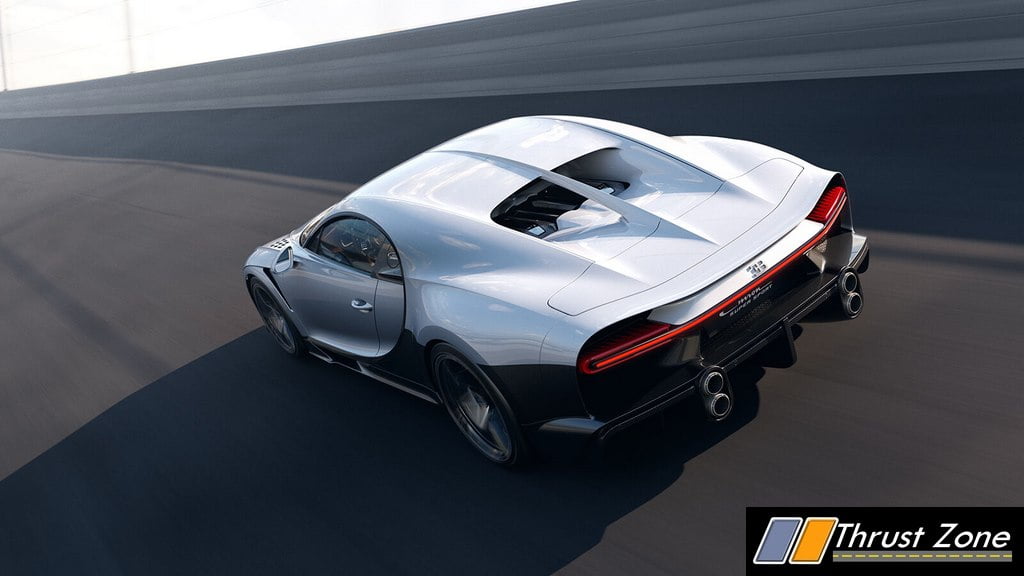 Bugatti thoroughly overhauled the 8.0-liter W16 engine for the Chiron Super Sport, boosting its performance by 100 PS to 1,176 kW/1,600 PS. At the same time, the vehicle weight was reduced by a further 23 kilograms. The engineers made modifications to the turbochargers, oil pump, and cylinder head with valve train, as well as to the transmission and clutch. The engine’s rpm was increased by 300 to up to 7,100 rpm, for noticeably increased agility. 1,600 newton meters of torque is now accessible from between 2,000 and 7,000 rpm, rather than up to 6,000 rpm.

In order to achieve seamless acceleration at full throttle, boost pressure must remain close to maximum while the hyper sports car rapidly builds momentum and reaches its optimal speed. When changing gear, the pressure dips only very briefly for a mere 0.3 seconds, to then return to full boost pressure of 2.8 bar to fill the Chiron Super Sport’s W16 engine.

Bugatti developed a new chassis specifically for the Chiron Super Sport’s high speeds and new aerodynamics. The steering systems and dampers create a firmer and more rigid connection to the vehicle from the driving feel, resulting in tighter steering for smoother steering movements. Harder springs stabilize the entire vehicle at top speed, and the engineers additionally also retuned the electronically controlled chassis. It regulates the settings in real-time in a matter of six milliseconds and adapts to the driving behavior. There is a choice of four driving modes – EB, Handling, Autobahn, and Top Speed.

Newly developed Michelin Pilot Sport Cup 2 tires which have been optimized for top speed offer greater rigidity and smoothness than grip-optimized tires fitted to the Chiron Pur Sport. What’s more, these are the only tires that can consistently drive at up to 500 km/h. This is made possible by reinforced belts that can cope with immense forces – verified on the test bench originally built for the Space Shuttle. Every tire is x-rayed following production in order to rule out even the most minuscule of irregularities. 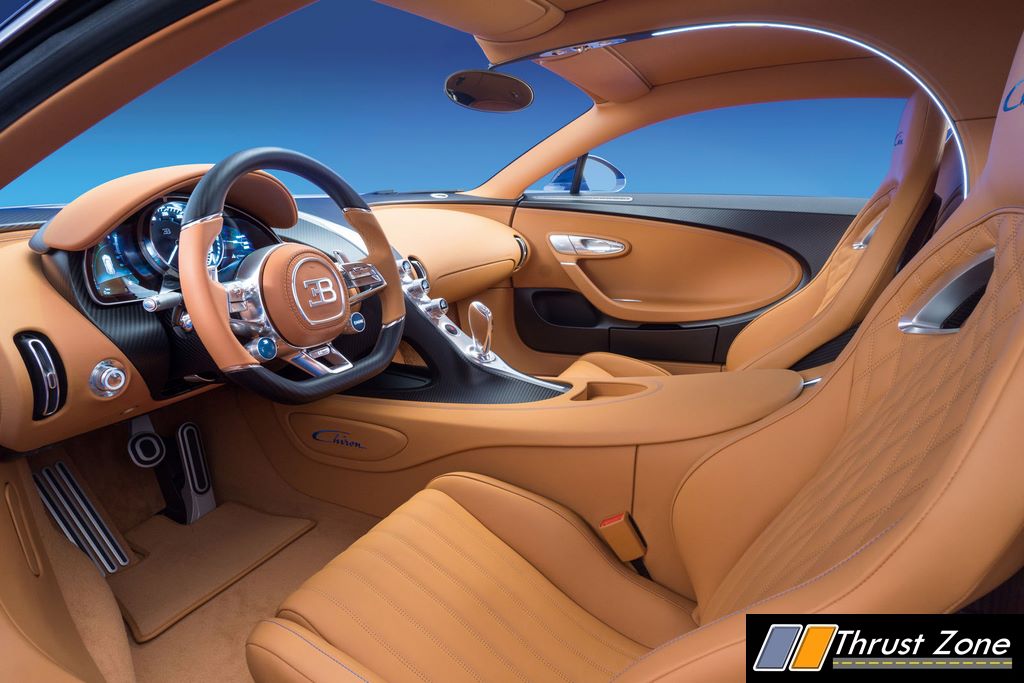 The new Chiron Super Sport joins the ranks of some famous Bugatti predecessors. Bugatti first unveiled the Type 55 Super Sport at the Paris Motor Show in 1931. The grand tourer combined thoroughbred race car technology with the comfort of a sophisticated two-seater. With the help of a compressor, the 2.3-liter eight-cylinder engine delivered up to 160 PS and accelerated the Type 55 Super Sport to over 180 km/h. A number of the bodywork versions were designed by the young and talented Jean Bugatti, and only 38 vehicles were produced up to 1935.

Bugatti didn’t construct the next version of the Super Sport until 1993 to 1995. 39 of the EB 110 Super Sport were produced. The EB 110 was once again all about lightweight construction, performance, luxury, and exclusivity, and became the best super sports car of its age. It was the first super sports car with a carbon fiber bodywork, all-wheel drive, and four turbochargers. The V12 turbocharged engine delivered more than 610 PS and set multiple records in the EB 110 Super Sport, including a record speed of 351 km/h.

Two decades later, Bugatti brought the Super Sport back to life again. The Veyron 16.4 Super Sport boasting 1,200 PS broke the speed record in 2010 with a speed of 431.2 km/h, thereby securing a spot in the Guinness Book of Records as the world’s fastest road-legal series sports car – a record which it held for many years. This is the only Veyron model to feature NACA ducts rather than the typical large air intakes and the only model on which the engine is largely covered. Bugatti developed the horizontal color split specifically for the Veyron 16.4 Super Sport.

History then repeated itself in summer 2019 when Bugatti exceeded the threshold of 300 mph with the Chiron Super Sport 300+4, with the record-breaking vehicle hitting an incredible speed of 304.773 mph (490.484 km/h). This served as the basis for a few-off model of just 30 units featuring a similar design and color elements.

Bugatti will soon begin with the manufacture of the Chiron Super Sport in Molsheim, France. Delivery of the hyper sports cars with a price tag of 3.2 million euros (net) is scheduled to start early 2022.

Nissan Subscription Plan Begins For Its Portfolio Of Cars