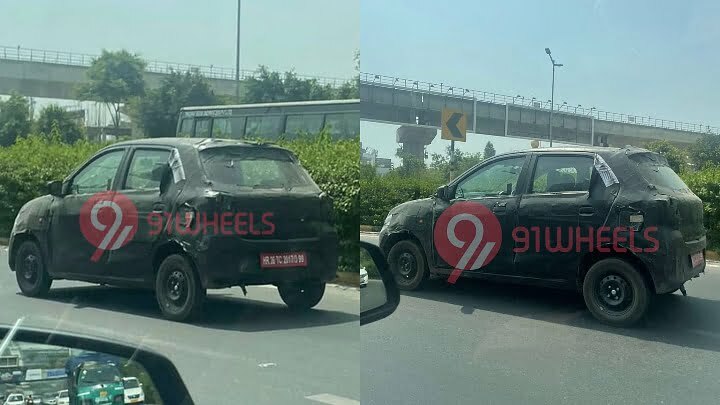 The recent images reveal the 2023 Maruti Suzuki Alto 800 in a camouflaged avatar. But the big notable change is the completely new design and silhouette. The Alto appears to be taller and curvier than before and the design is likely to see similarities with the new-gen Celerio that arrived last year. Spy images show a new set of headlamps, wider grille and a new bumper. The bigger glass area on the side also promises a more spacious cabin, which means better space at the front and rear for the occupants. The test mule was seen with steel rims and they are likely going to be standard on the car in a bit to save

The big change on the next-gen Alto 800 will be the structural build that’s expected to be a whole lot better in a bid to meet the upcoming stringent safety standards in India. Also features like four/six airbags, SmartPlay Studio infotainment system, and an improved 5-speed AMT should be a part of the package from lower variants. The new Alto 800 is also likely to see a revamped 798 cc three-cylinder engine for improved efficiency and lower emissions, while the Alto K10 is likely to follow suit with the 1.0-litre K-Series petrol engine from the Celerio.

More details on the 2023 Alto 800 are expected to unfold in the following weeks. There’s no word on the launch yet with Maruti Suzuki revamping its product line-up one product after the other. So, there will be some time before the company’s existing range gets the update before we reach up to the Alto. That said, the model is indeed on its way and the launch is likely around the festive season or possibly in early 2023. The Auto Expo then?

Kia EV6 To Arrive In India By May, Spotted Testing Sans Camouflage