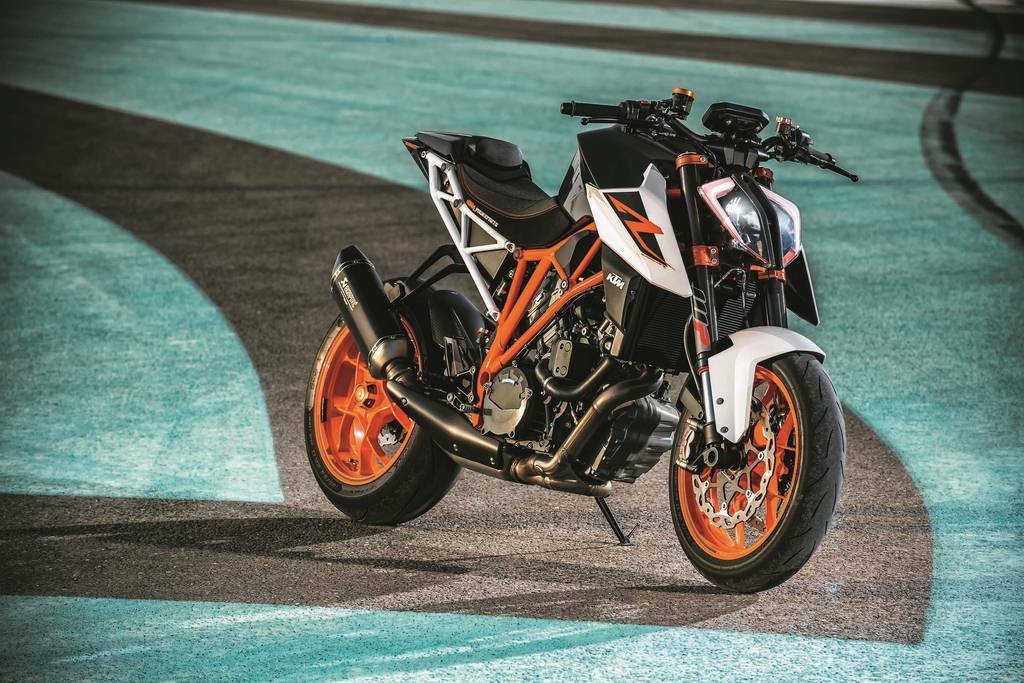 KTM was poised to take all the attention at the 2016 EICMA along with Husqvarna, its subsidiary, and it did not disappoint. We have already covered how brilliant he new 2017 KTM Duke 390 promises to be. Now it is time of the biggest maddest and the baddest duke out there which has been upgraded for next year, the 2017 KTM 1290 Super Duke R. We weren’t sure that this beast could get any better, but the new bike takes the things even further.

The most striking element of the new bike is its new headlight assembly which is LED. This is the same design that is going to be present on every Duke model. KTM has also modified the TFT dash which is a welcome addition since the old design did not suit the Super Duke’s price. The other most important part is the revised 1301cc V-twin engine which is Euro 4 compliant and makes a whopping 177bhp. This has been achieved by reworking the cylinder head and intake.

The 2017 KTM 1290 Super Duke R also gets Cornering ABS from Bosch along with an IMU for controlling the traction control system. The bike also gets New 48 mm USD split front forks by WP suspension. This has separate damping circuits with stiffer fork springs and sportier settings. Then there is new set of WP shock absorber at the rear with a stiffer spring for a more balanced chassis. While, stuff like Motor Slip Regulation (MSR), Quickshifter (up and down), and KTM MY RIDE can be had as optional fitment from KTM dealers.

Alongside the biggest Duke, KTM also showcased the smallest Duke, the 2017 KTM 125 Duke. It arrives with obvious changes to the design that remains similar to the 2017 KTM Duke 390. It includes LED headlight and 43mm WP Suspension while the breaks are By-Bre. KTM has updated the instrument cluster of the 2017 KTM 125 Duke which is now a full TFT display.

You will also get the new KTM MY RIDE entertainment system on the 2017 bike. This system offers smart phone hands-free connectivity. The new side mounted exhaust and new seats also look neat. The bike is powered by a 125cc, single-cylinder, liquid-cooled engine that makes 15bhp of power while the bike weighs 137 kgs. The engine is mated to a 6-speed gearbox and the Duke also gets dual channel ABS and Metzeler tyres.

Zoomcar and Mobileye N.V. Partner Together To Prevent Accidents With ICICI Bank

Husqvarna Vitpilen 401 and Svartpilen 401 Are Motorcycles From The Future! Are Coming to India!