RE Himalayan 450 Incoming Soon – Spied For The First Time! 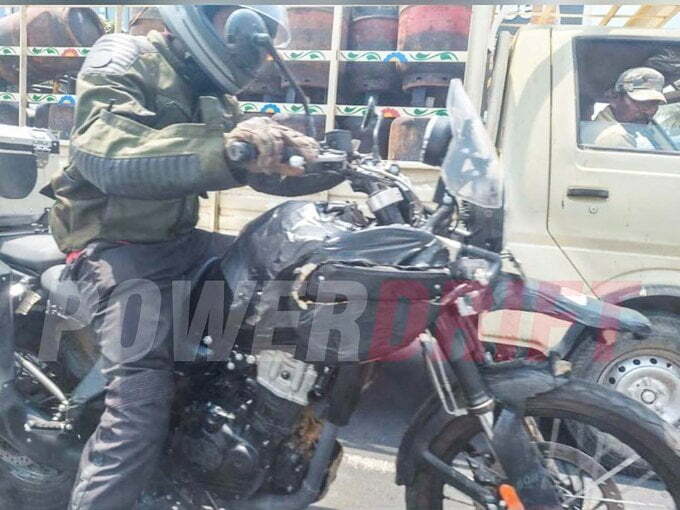 In order to effectively take on rivals such as KTM 390 Adventure, Royal Enfield has come up with a brand-new platform. Codenamed K1, this new platform will spawn a number of new offerings and first off the mark will be Himalayan 450 catering to aspirations of the adventure (ADV) segment. Now it has been spied testing for the first time!

The bike will feature a single-cylinder liquid-cooled engine capable of putting out 40 bhp. The engine is capable of generating even more than 45 bhp but in the interest of strong low- and mid-end range, RE will launch the bike with 40bhp output very likely.

Himalayan 450 gets different styling and design although cues related to Himalayan 411 are quite apparent on the bike. Specifically, the way the frame connects the headlamp to the fuel tank gives the impression of the brand heritage. In addition, the circular headlamp is unmistakably Himalayan and so are the setup of spoke wheels. The bike will use a trellis frame and we expect RE to not get it too heavy for the standards of the ADV segment.

The front suspension on Himalayan 450 gets a long travel and adding to the excitement is the inclusion of USD forks. We don’t have information on the ground clearance but by looking at the image, Himalayan 450 definitely impresses on this front. The bike seems sorted from the perspective of ergonomics and ride comfort too. Handlebars are easy to reach and center-set foot pegs add to the overall feel of riding comfort.

Now coming to the critical question of launch timing and pricing of the Himalayan 450. According to initial plans, Himalayan 450 was expected to get market launch towards the end of 2022 although the latest schedule has pushed the launch to the first quarter of 2023. As far as pricing is concerned, we guesstimate Himalayan 450 to start at around Rs 2.7 lakh (ex-showroom Delhi). However, at this price point, it’ll be very close to what Interceptor 650 demands from prospective buyers.

RE might address this issue while launching new variants of Interceptor 650 including the ones with alloy wheels that will push the prices of Interceptor 650 upwards, thereby creating a significant gap between the prices of the two motorcycles. Significantly different than the Himalayan and Scram 411, it will keep the aforementioned bikes for sale while this goes on sale at the same time.

Hero Electric Splendor Could Be A Common Sight In The Next Decade!