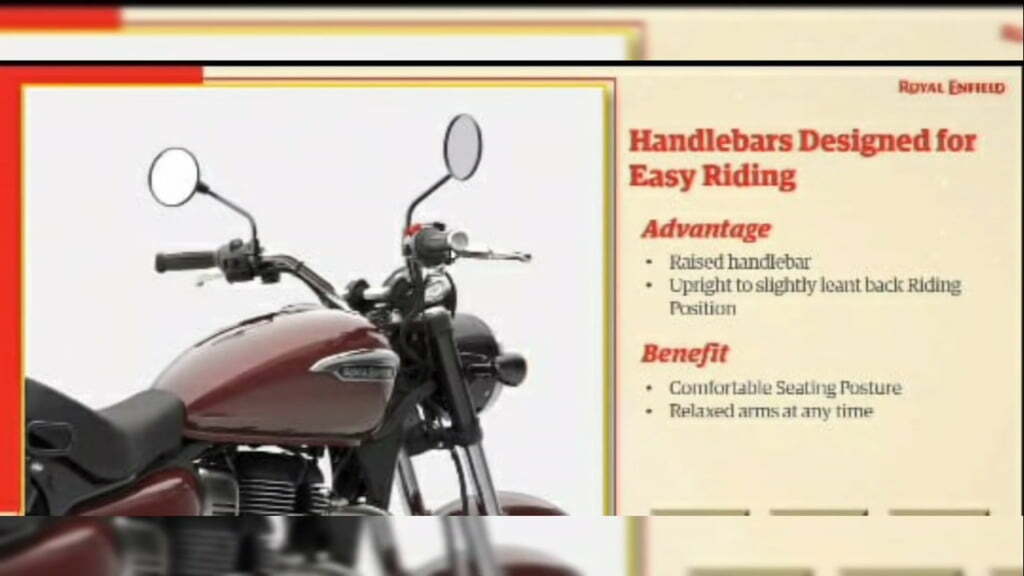 The Royal Enfield Meteor 350 is the upcoming Thunderbird replacement from the Chennai-based bike maker and the motorcycle’s launch has been long-delayed due to the COVID-19 pandemic. However, the Meteor 350 is closer to launch than ever and is slated to debut sometime later this month. We’ve been bringing spy shots, renderings and even production-ready images of the bike in the past; but now, details of the technical specifications have emerged on the internet of the upcoming motorcycle.

Royal Enfield will be employing a new chassis for the Meteor 350, which will use a double-cradle frame with the engine used as a stressed member. The leaked details further reveal that the motorcycle will employ a newly-developed 350 cc single-cylinder, long-stroke engine with fuel injection. According to the leaked images, the new mill will develop 20.4PS and 27Nm of peak torque. The motor will retain the signature thump that RE motorcycles are known for. Power figures are similar to the 346 cc single-cylinder, air-cooled motor that develops 19.3PS and 28Nm on the BS6 Royal Enfield Classic 350. While power figures will be identical, the new engine is likely to get a SOHC set-up. 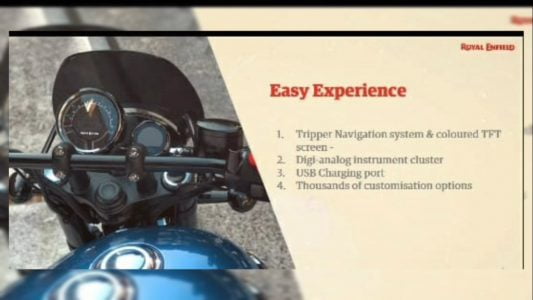 The leaked images further reveal that the motor has been tuned to offer lower emissions, instant acceleration, better refinement and an easy-riding experience on the highway and the city. The Thunderbird successor will also get a newly-developed transmission with a new clutch with reduced friction and fewer parts and linkages. The new unit promises lighter clutch operation, smoother gear shifts and better clutch life. Hoping for a slipper-clutch though would be far fetched given the cost-consciousness involved in the development of the motorcycle.

The Royal Enfield Meteor 350 will set-up a completely new direction for the brand as it plans to go more tech-friendly with its latest motorcycle. The bike will be the first RE to get a semi-digital instrument console with single, round instrument pod incorporating a digital readout that will incorporate all the tell-tale lights including the gear indicator, eco indicator, service reminder, fuel bar graph, multiple trip meters, low fuel indicator, low battery and lots more. There will also be a separate digital TFT pod on the right of the console that will act as a navigation display accessibly using a smartphone via Bluetooth connectivity. The Meteor 350 will be the first bike to get the feature in the RE family, and we expect it to be more commonly added in the new/updated motorcycles going forward.

Leaked images have also revealed that the new Royal Enfield Meteor 350 will sport a new chrome badge on the fuel tank along with a complete redesign of the offering, while the company has hinted in the past towards multiple personalisation options that will be available right from the factory. Globally too, the Meteor 350 will be an important product for the company as it will allow the brand to sell the Thunderbird successor easily. Globally, the Thunderbird nameplate is trademarked by Triumph, which made it difficult for RE to sell the bike outside in India. In markets like Australia, the now discontinued Thunderbird 350 was sold as the Rumbler 350 to avoid the name conflict.

Yamaha Tenere 300 Could Be Under Consideration – Kawasaki Versys 300 Rival