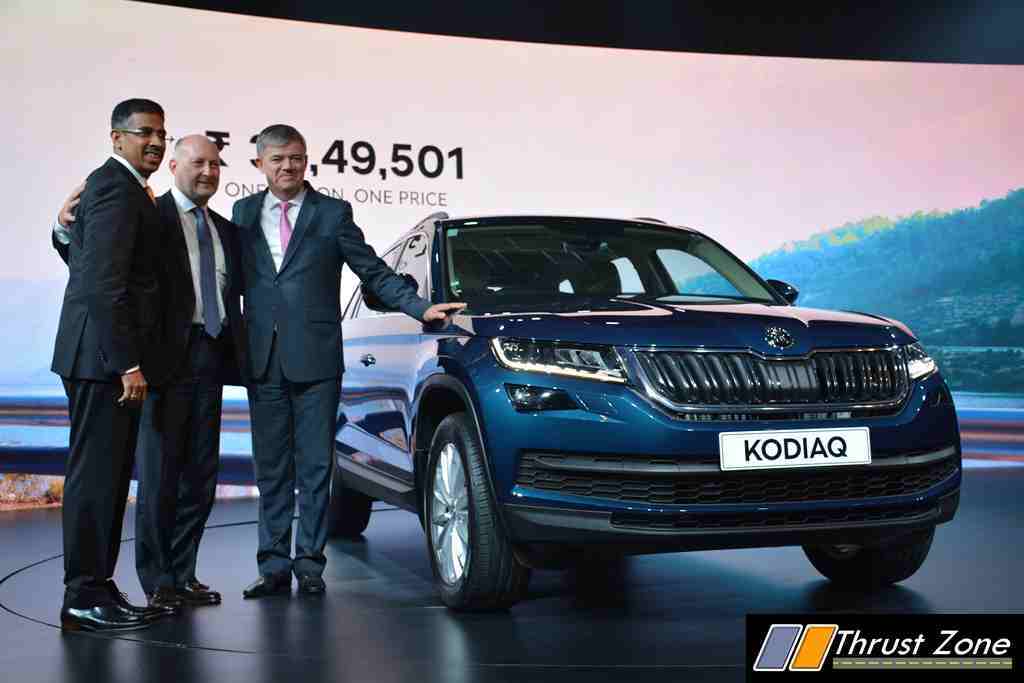 Skoda Kodiaq India Launch is done at a 34.5 Lakhs ex-showroom nationwide which is on par with its competition who offer slightly less in comparison

Let’s come to the point. Kodiaq is here and is set to shake up the 30 lakh plus market in the SUV space. We have all the details below for you. The ŠKODA KODIAQ is impressive with combination of he narrow raked headlights which flow seamlessly into the radiator grille, with full-LED technology for the first time, the brand’s first large SUV is an unmistakable presence on the road. The side and rear views are also crisp: the doors are athletically shaped and the tailgate is expressively sculpted. The split rear lights with LED technology shine in the ŠKODA-typical C-shape. In the side view, the long wheelbase and short overhangs point to the large interior. The angular wheel arches form a key element of ŠKODA’s SUV design language. With its dimensions, the ŠKODA KODIAQ is at the upper end of its segment. It is 4,697 mm long, 1,882 mm wide and 1,676 mm tall (including roof rails); its wheelbase measures 2,791 mm.

The 2.0 TDI generates 150 PS and 340 Nm. On average, the engine returns a fuel efficiency of 16.25km/L. The KODIAQ accelerates from 0-100 km/h in 10.1 s and reaches a top speed of up to 192 km/h. (The new 7-speed dual-clutch transmission (DQ-500 7A) is a variant that has been designed for powerful engines with a torque of up to 600 Nm). The DSG transmission is a very compact construction and enables quick and comfortable gear changing.

The all-wheel-drive system with electronic control delivers a big increase in traction, stability and driving safety. The all-wheel drive has an electronically controlled multi-plate clutch which allows the KODIAQ to venture off-road. The control unit constantly calculates the ideal driving torque for the rear axle; loss of traction is virtually eliminated due to a control system that is dependent on driving status. When the KODIAQ is cruising the power is transmitted to the front axle, thus increasing the fuel efficiency.

9 airbags in the KODIAQ come as standard reiterating ŠKODA’s strong emphasis on safety. The KODIAQ’s state-of-the-art handsfree parking minimizes the hassle of parking in tight spots by automatically selecting an appropriate parking place in a row of parallel or perpendicularly parked vehicles. When parallel parking, it only needs a space 60 cm longer than the car itself. In today’s crowded cities and space-starved streets, hands-free parking is a blessing indeed.

In addition, the car is equipped with other safety features such as iBuzz Fatigue Alert which detects signs of fatigue in the driver and prompts the driver to take a break. In case of an accident, the Multi-Collision Brake, which comes as standard, prevents any further uncontrolled movement of the ŠKODA KODIAQ. The KODIAQ opens up new vistas with the electrically-adjustable panoramic sunroof, which enhances the feeling of space.

The components of the MacPherson front struts consist of steel; the steel four-link rear axle absorbs the longitudinal and transverse forces separately. The power steering, using an efficient electro-mechanical drive, ensures exact contact with the road and works in close harmony with several assistance systems in the ŠKODA KODIAQ. The large SUV from ŠKODA comes equipped with Trinity 18-inch wheels. The brakes – with large ventilated brake discs at the front – are strong and stable. When cornering quickly, the electronic differential lock XDS+, which is a function of the Electronic Stability Control (ESC), makes handling even smoother and safer. ŠKODA has also introduced Driving Mode Select function in the KODIAQ. It allows the driver to adjust the operation of the engine and DSG management, power steering, air conditioning and other systems in Normal, Eco, Sport, snow and Individual modes.

The Amundsen music and infotainment system in the ŠKODA KODIAQ represents the latest technology. It works quickly, offers state-of-the-art functions and interfaces, features capacitive touch display in a glass design – it reacts to the touch of a finger and not just to pressure. The basic functions are easy to operate using physical buttons and control dials. For the first time, the SmartLink all-in-one app also integrates SmartGate in the new ŠKODA KODIAQ SUV – alongside Apple CarPlay, Android Auto and MirrorLink™ standards. The premium Canton Sound system features 10 speakers, including subwoofer, and has a power output of 575 watts. The KODIAQ also features a Digital Voice Enhancement feature which uses the infotainment system to transmit the voice from the drivers position to passengers in the seat.

Equipment& Storage
The ‘Simply Clever’ features for example include door-edge protection: thanks to preloaded springs, this deploys automatically when opening the car door and prevents the metal edge of the door from coming into contact with a garage wall or an adjacent car. When shutting the door, the trim folds itself back in. This ‘Simply Clever’ feature thereby prevents bumps and scratches to your own car, as well as neighboring vehicles. For the first time in a ŠKODA, the Power Nap Package and removable boot torch are made available.With a volume of 270 to 2,005 L (with the rear seats folded down), the ŠKODA KODIAQ offers the largest boot within its class.

In addition, the virtual pedal enables contact-free access and it’s available exclusively with the electrically-controlled 5th door and KESSY (Keyless Entry, Start and stop button). Electrically-controlled 5th door opens and closes at the mere touch of a button on the remote control and driver door. You can also adjust the upper door position to suit your needs. There is a button for closing the 5th door directly on the door, too. And lastly, just like every

The ŠKODA KODIAQ will be introduced in the market with the Style variant only and priced at Rs. 34.5 Lakhs

Nissan Diwali Discount For 2017, Makes it An Irresistible Offer For Hatchback Buyers