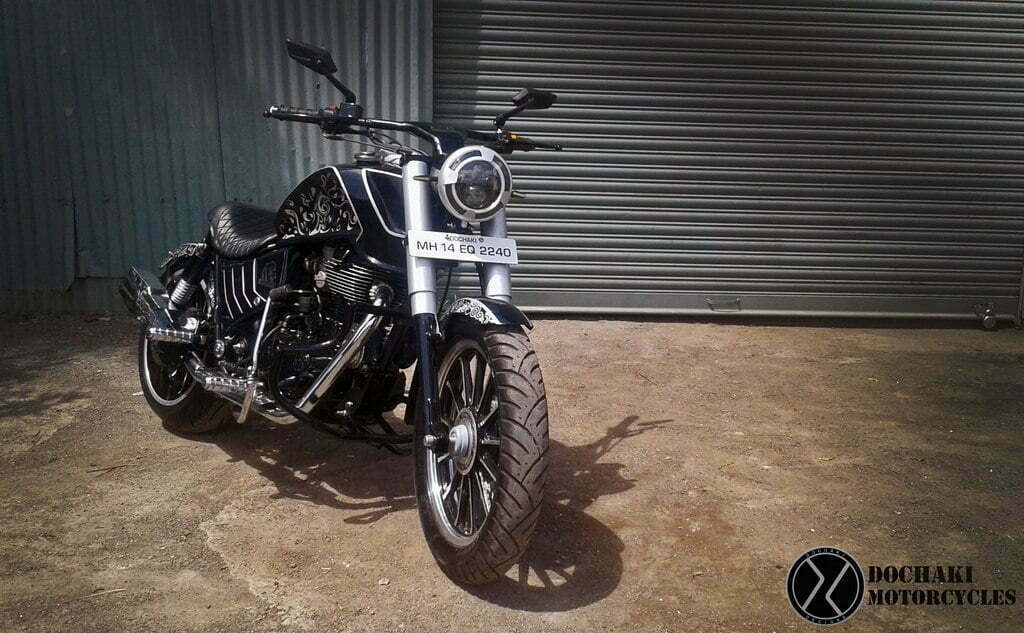 Spitfire V.82 and Bakka By Dochaki, a Pune based custom motorcycle maker continues with several of his impressive builds, something that cannot go un-noticed

Now motorcycling is viewed in many different forms across the globe. Some people love it for the sheer pride it offers, some may boast about it while others could just be addicted to the adrenaline that motorcycles offer when given a whip. Some may even love wandering, traversing the off beaten paths and simply getting lost. Motorcycling has vivid forms and they’re all unique, entertaining and exciting. Back in the day when electronics were only limited to high-tech labs and computers, motorcycles were simple and all raw. There was this urge for more speed and absolute fatuousness that gave rise to cafe racers.

The recipe was simple, strip off all the un-essentials and throw in low set clip-ons and viola! You have a cafe racer. Soon these retro looking half-baked race bikes took the world by fire. They were simple to manufacture and caught lots of attention too. All major manufacturers like Ducati, Royal Enfield, BMW, Moto Guzzi and Triumph had their own cafe racer model available for the public at that time. The trend went viral and soon people started customising their daily rides to cafe racers. Personalising was on top of their bucket list. They blended in various designs, colours and equipment to maintain the uniqueness of each bike. Some people even had a replica version of famous cafe racers which weren’t for sale. This culture was now taken up as a lifestyle. Apparels, accessories were made and sold which complimented the cafe racer theme.

Fast forward to 2018 and we have a full line up of cafe racers available in India, the RE Continental GT, the Triumph Thruxton R, BMW’s RnineT racer just to name a few. Not to forget the many customised cafe racers available for the public. One such cafe racer caught our fancy. It’s built by a custom house labelled ‘Dochaki Motorcycles’ and is called the Spitfire V.82. 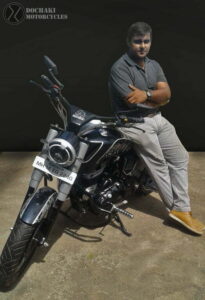 This Spitfire started life as a first generation Hero Honda CBZ. The V.82 has an air-cooled 156.8cc single cylinder motor with overhead valves and employs a 5-speed transmission. Well, those are just the technical bits. What will turn your head over heels is its styling. You just can’t stop yourself from saying ‘wow’. The Spitfire’s stance is simply awe-inspiring; you can’t help but simply fall in love with it.

The compact, neat looking wedge-shaped fuel tank is finished in silver paint and has a stripe running longitudinally adding flair to the design. The frame is all black and employs retro looking dual shock setup at the rear. Upfront the motorcycle has a round headlight with ‘X’ shaped black stripes and lots of chrome bits to add character. The front mudguard is slim and edgy looking and the telescopic forks are finished in gloss caramel brown to compliment the rear shocks and also the brown seat. Talking about the seat, it’s cross-knit and flat in profile to match the lean and purposeful design of the motorcycle. The Spitfire also employs side bags which are located under the seat. The cockpit too is kept simple and old-fashioned. It has two dials for the tachometer and has a clubman style handlebar. The throttle grips are eye candies and so are the silver levers.

The foot controls are stretched further back to make the riding position slightly more committed. On its left it has an open type air filter tucked neatly behind the oval plate with number ’82’ inscribed on it. Coming to the rear, the motorcycle’s box section swingarm holds a flat tire which is hard to miss and it is housed by a short sporty looking mudguard.

The tail lights used resemble thrust outlets, cool right! The exhaust is another thing that is unique to this bike. It is entirely finished in chrome and the header is wrapped while end-can has four outlets that open up to the right side. It uses black spoke wheels on both ends and that completes the overall package. It amazes me how much I can go on and on talking about this motorcycle. You don’t get to see or experience such motorcycles every day. They are super fun when riding and when stationary, they simply are a piece of art.