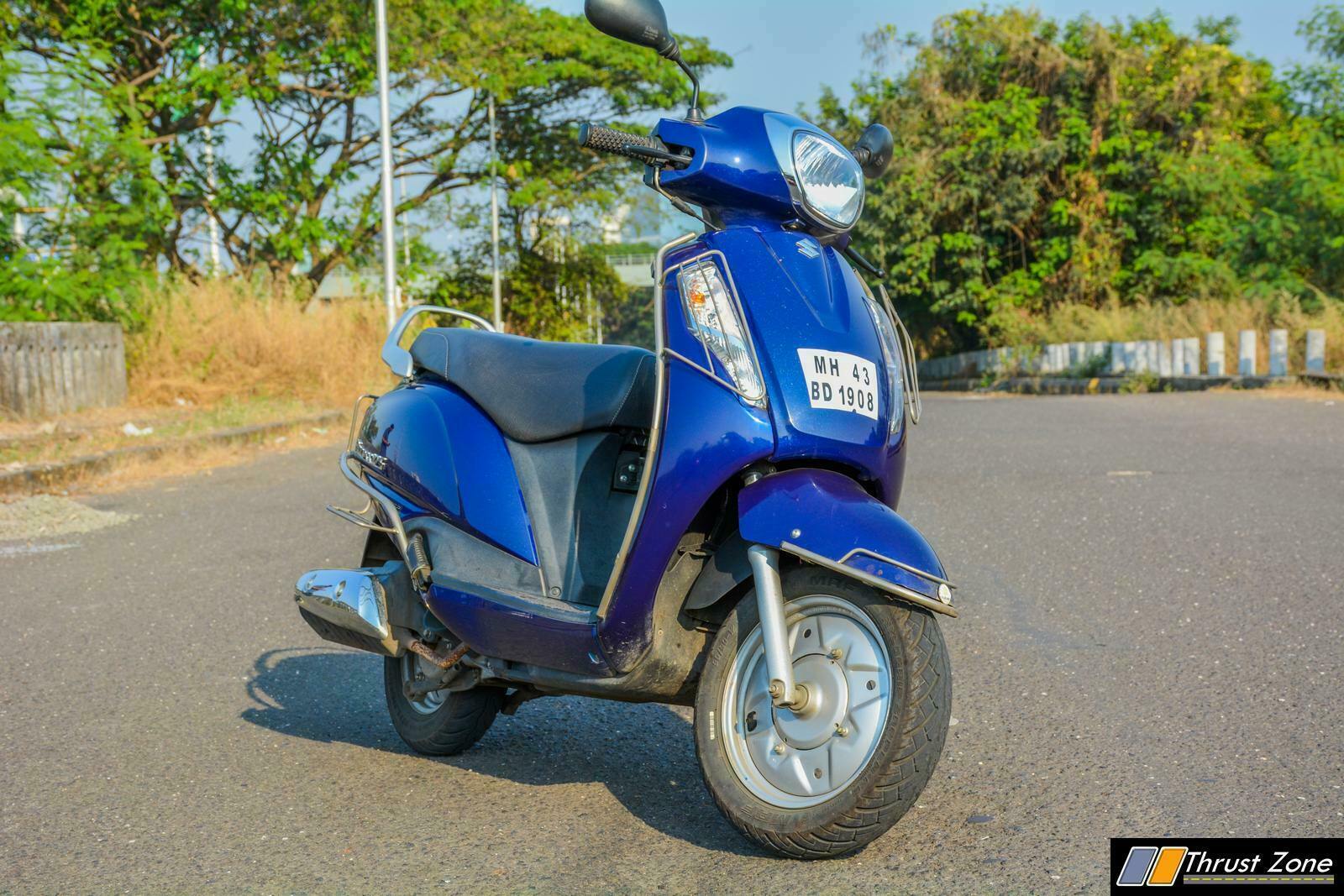 Motorcycles are all cool and how, but then scooters come in handier at times. Especially when talking about zipping around town without putting too much work in it, twist the throttle and get going. Fortunately, the scooter options available in India are in abundance, likes of the Suzuki Access 125, Honda Activa, TVS Jupiter and few others. From the array of scooters available in market, we have had the Suzuki Access 125 in our stable for quite a while and this is our take on it. 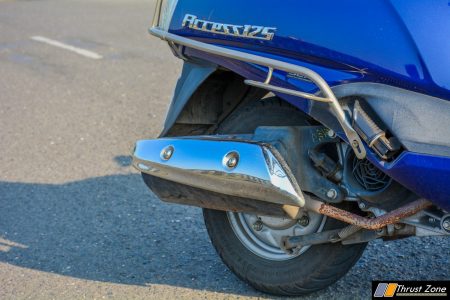 Suzuki has surely payed attention to the Access 125’s design and worked on it.A lot of it is visible just by the elements that have been revamped. Firstly, the headlight. The retro shaped headlight with chrome surrounds adds a lot to the front fascia of the scooter. It fits so well with the overall bodywork that it doesn’t feel out of place. The body lines are equally smooth and not too much of the buffed body cladding is visible out there. Safe enough to say Suzuki let its scooter look like a scooter.

To keep the cost on par with the competition, Suzuki decided to go with conventional Halogen bulbs for every possible spot on the Access 125. Now, that’s not a deal breaker but at least a LED headlight unit would be much appreciated. The Access 125 has both, an analogue speedometer and a digital trip meter. The overall dash looks neat, is easy to read and that’s all you need.

Suzuki went a notch up with the build quality for the Access 125. The switchgear quality comes off as premium and doesn’t have the flimsy, cheap plastic feel. Right from the front metal apron and metal mudguard to the side plastic body panels, every possible fitment has been looked after really well. That being said, unlike a lot of other scooters after years of usage, the Suzuki Access 125 probably won’t end up rattling around.

Apart from the build quality, the Access 125 gets the cake for its storage capacity. The footboard has enough space to carry a full-size suitcase and still leave adequate legroom. There’s a small pocket on the inside of the apron that can easily hold half-a-litre of water bottle. Call it nit-picking but the large under-seat cavity is not large enough to store a full-face helmet.

Now there’s nothing wrong in placing the filler cap under the seat but an outside one would be rather convenient. Adding up to the overall scoreboard, the Suzuki Access 125 has a pillion grab-rail as well, and it surely does help having a comfortable ride. 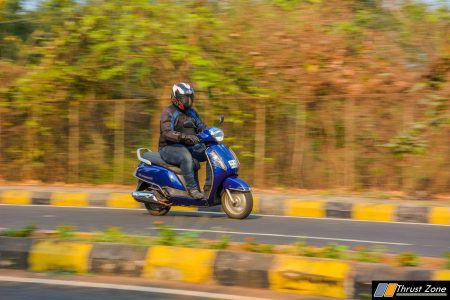 Not being a fanatic here, but there’s nothing wrong if we said that Suzuki’s done a great job with the seat design. The rider and pillion, both have more than enough room to move around the seat and still have some more space left. The handlebar stands a bit taller compared to the regular ones and that really adds up to the rider’s comfort and overall stance of the scooter. With that being said, the front end doesn’t feel like it went on a keto diet and cut down extra weight, it weighs adequate for the overall balance. 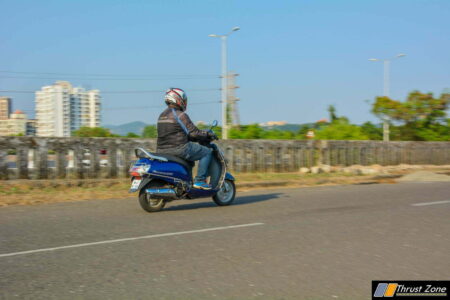 Although the 124cc motor makes only 8.70ps of power and 10.20 nm of torque on paper, it runs very refined and feels solid to catch some speed. The power comes off in a very linear manner and doesn’t fade away as we hit higher speeds. The only complaint here is the scooter stalls often when idle, although, we are not sure if that’s the case with every other Suzuki Access 125 out there.

A firm and planted ride is often the result of a fine-tuned suspension. On the Suzuki Access 125, the suspension feels a bit stiff considering it’s a scooter that will do duties on the city roads where the potholes and uneven speed-breakers put everything to test. With a fuel tank capacity of 5.60 litres, and averaging 55km/l, the Access 125 does balance the needle between performance and efficiency. 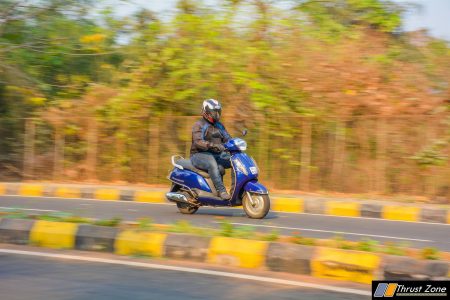 The Suzuki Access 125 does it’s 0 to 60 kmph run in7 seconds, give or take; and that’s considerable, not that you’ve to run it down the quarter mile. Even up to speeds of 90kmph, the engine doesn’t feel like it ran out of juice and one could only feel the bare minimum vibrations.

Braking on any vehicle has to be equally good if not better when held against the power and weight. Our specific vehicle was equipped with drum brakes on both front and rear. The braking on front is just fine, but the rear tends to lock up under hard braking, not very scary though. 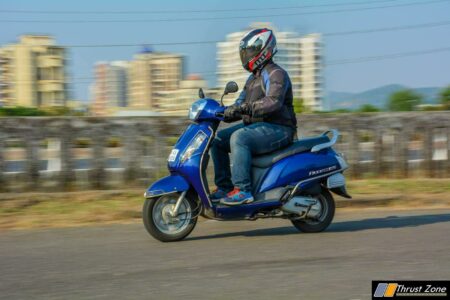 Contributing to all these attributes is the one point that cannot be missed out- weight reduction. Yes, as simple as that, the Suzuki Access 125 has shredded a few kilos and that in turn has contributed to the acceleration and braking. Earlier, the scooter had a kerb weight of 112kgs and now it weighs 102kgs, that’s a depletion of 10kgs! Not only the acceleration and braking benefits from weight reduction but the handling also gets better. The Access 125 is easy to zip in traffic and to make maneuvers. 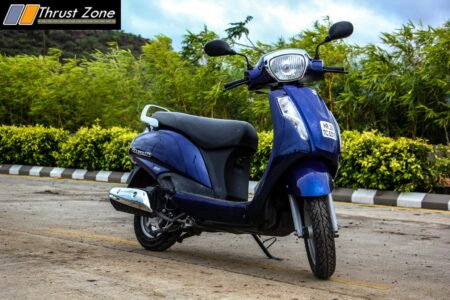 For a price tag of Rs. 55,977, the Suzuki Access 125 is one of the most potential scooters available in the market and with the Japanese build quality, it’s equally reliable as well. With Suzuki’s largely expanded network, the sales and services hasn’t been a problem either. Now the only thing remaining is you taking a test ride for yourself. 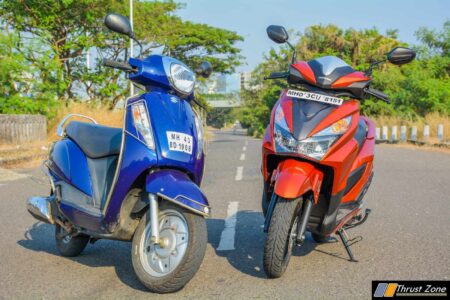 Editor’s Note: While we realized Pratik also owns one Suzuki Access and so do i here. We decided to give him the opportunity to write as he is all praises. Doesn’t mean we are not. Our Suzuki Access in our city only run delivers 48 km/l and the crisp acceleration along fantastic yet stiff suspension makes it fun to ride whenever i can steal the keys from my brother. Largest seat and underseat storage has made it the choice that has been well worth it. While my brother (older) preys his eyes on the younger looking Burgman, i could snatch the keys to the Access and have a ball of a time, even more now.

The Swish also continues to be our regular steed since 7 years now and three Suzuki’s in our garage right now, which includes the Pratik’s, we think adding a fourth one isn’t going to be a problem. Suzuki makes the best engines and since its the heart of the matter, pun intended, it wins our heart every time we go and buy a Suzuki two wheeler over all its rivals without a second thought.