Tata Altroz CNG Spotted Testing, Will Be First Premium Hatchback To Get A CNG 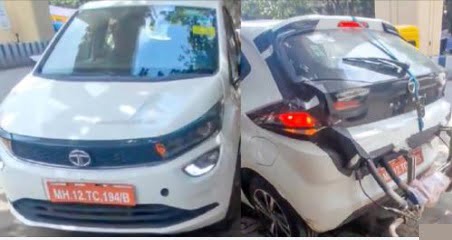 Tata Motors will soon join Maruti Suzuki and Hyundai Motor India in offering an expansive line of CNG models in its range. With rising fuel prices, the demand for CNG vehicles has grown and all automakers are exploring more options with the alternate fuel option. Following the same line, the Tata Altroz premium hatchback was recently spotted testing with the CNG kit. The test mule can be seen with the emission testing kit attached to the vehicle.

The premium hatchback space is yet to get a CNG option and the Tata Altroz could be the first in the segment to get the same. Although details are scarce, it’s likely that the Altroz CNG will come equipped with the 1.2-litre naturally aspirated petrol engine. The motor currently develops around 85PS and 113Nm of peak torque. It’s paired with a 5-speed manual and a DCT automatic unit. The CNG version will see the engine being detuned by about 10 horses and is likely to be offered with the manual gearbox.

Given Tata’s strategy with the Tiago and Tigor CNG variants, expect to see the Altroz CNG available in a number of variants that will include some top-spec options too. The automaker has been equipped its CNG versions with all the bells and whistles, and it should be no different with the Altroz either. Interestingly, the Nexon was also spied testing with a CNG kit which would make it the first subcompact SUV to get the CNG option. It will also be the first SUV in the segment to sport petrol, diesel, electric and CNG powertrain options.

In terms of pricing, expect the Tata Altroz CNG to command a premium of about Rs. 50,000-60,000 over the current asking price of the model. However, the operating costs should substantially reduce on the hatchback, making it an ideal buy for those looking to cover higher mileage over the ownership period. A timeline for launch is not known yet but the model could arrive towards the end of the year, possibly around the festive season. The Altroz competes against the Maruti Suzuki Baleno, Toyota Glanza, and Hyundai i20 in the segment.