Tata Nexon was spotted in West Bengal but this is not the usual spy shots that we are used to. The car that has been spotted in Siliguri but unfortunately it has met with a crash. The local media reports that the car was brought from the Mumbai head office of Tata Motors for advertising reasons to West Bengal. Prototype cars are rarely met with an accident and the last time this happened when the Mahindra KUV 100 was crashed in Nilgiri hills as it lost control and headed into a ditch. The Tiago also suffered the same fate when it was called the Kite almost a year before its launch.

Here, the case is different as what the reports suggests that a tractor loaded with a sand, which was most likely overloaded as well has crashed head on with the Nexon after it lost control on the road. The front seems to be damaged and the rear wheel has been detached as well. There has been no loss of life expect for a biker stand near by has received minor injuries. 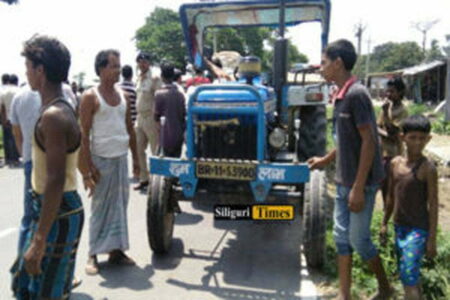 Post the incident, the injured people was taken to the local Thakurganj Hospital. It is unknown who are all hurt in the scenario, but whatever it is, it is on the lower side. Police took the matters in their hands post the incident and once the injured people were taken to the hospital. Nexon is set for launch which is slated to happen in Diwali and is the most promising car from Tata till date as it is a proper compact SUV to go against some serious rivals. Stay tuned we will bring you more updates on the same as the story develops.