‘That Grille’ Has A New Sibling! 2020 BMW 7-Series Get Massive X7 Inspired Grille 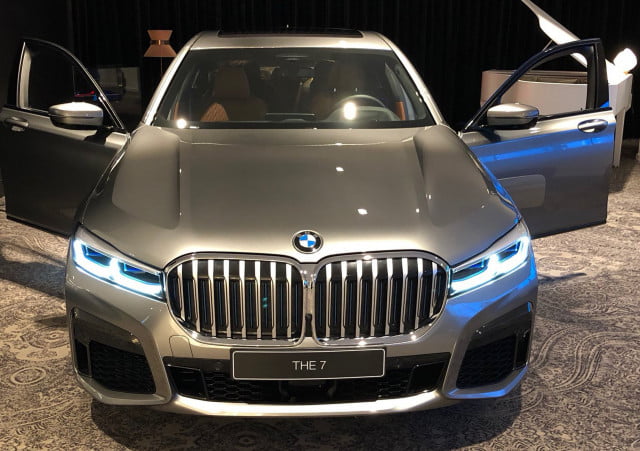 2020 BMW 7-Series highlight is that massive grille at the front. Expect hybrid petrol engines and the usual diesel and V12 motor on offer

The facelift version of BMW 7-series had earlier been spotted testing with heavily camouflaged nose and boot. However, in the latest images leaked online, 7-series can be seen without any camouflaged frontage, revealing the new design for headlight cluster and grille. The revelation points toward the 7-series adoption of BMW’s latest design cues characterized by sleeker headlamp assembly, angular LED inserts, revised front bumper, and a more prominent air dam. The Spy shots available earlier revealed the revised tail lamps and along the lines of the front bumper, changes are also expected on the rear bumper.

BMW has also updated the interior all new 7-series, albeit the changes are minor in nature. The most prominent upgrade is the incorporation of a revised digital instrument cluster that we have already witnessed on the 3-series and new X5. The quality of interiors is expected to be top notch and equipment level will be among the best in the category.

No change is expected under the hood where the new 7-series will feature the current crop of power trains and transmission. In the Indian market, the current version of 7- series features a set of 3.0-litre, 6-cylinder petrol and diesel engine with an output of 326PS/450Nm and 265PS/620Nm respectively. A more powerful petrol version displacing 6.6-liter V12 with an output of 610PS/800Nm is also available for the driving enthusiast. All these variants get an 8-speed automatic transmission.

There is also a possibility of BMW introducing the plug-in hybrid variant of 7-series, the 740Le in India to rival the likes of Lexus LS 500h. As of now, the hybrid variant of 7-series is available for sale in the international market only. Once launched, the new 7-series will take on the likes of upcoming Audi A8, Mercedes Benz S-Class, and Lexus LS 500h among others.

Friendly Neighborhood TVS Ntorq Is A Transformer Within – Check it out!