Audi held the eighth edition of the Audi Twin Cup with participation from 33 Audi dealerships across India. A total of 114 teams comprising of 301 Audi dealer technicians and service advisors competed for the coveted championship titles. Six technical and six service teams made it to the finals where the team from Audi Bhubaneshwar bagged the top spot in the TWIN category which was introduced for the first time in India.

The Audi Twin Cup tests the customer orientation and technical knowledge of the participants. The technicians and service advisors compete in the areas of diagnostics and repair, as well as in personal customer support. In addition to specialist competence, close and efficient cooperation between service advisors and service technicians is the primary determining factor in achieving top performance in the realistic work situations. 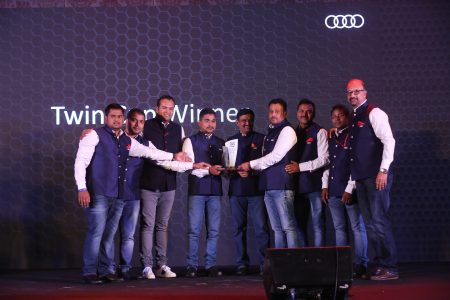 In the keenly contested India finals of the eighth edition of the Audi Twin Cup, the team from Audi Bhubaneshwar exhibited exemplary technical & service skills to emerge as a winner in the category of Technology and Twin, while Audi Kolkata demonstrated their expert service skills to bag the title in the Service category. The team from India will compete with around 70 teams from 38 countries at the World Finals in 2019 that will be held in Europe.

Outstanding technical know-how and consistent customer focus led to victory for the Audi India team of service technicians and advisors in the recently held finals of the International Audi Twin Cup 2018. In the Technology Category, the Audi team from India comprising of members from Audi Ludhiana, Audi Karnal and Audi Bangalore secured 2nd rank. While Service team consisting of members from Audi Bangalore, Audi Delhi South and Audi Mumbai South secured 5th rank. The twin team secured 5th rank at the global platform which consisted of 67 teams from 34 countries. The Audi Twin Cup is held every year worldwide since 1996 and sees participation from all members of the Audi dealer network.