Bajaj Auto is gearing towards the launch of its Urbanite scooter in India which has been spotted testing again on Indian roads recently. Electric Scooter From Bajaj were snapped from behind and confirm some interesting details that were initially leaked online in February earlier this year.

According to the spy shots, Electric Scooter From Bajaj will come with slanting tail lamps which look quite attractive from a design perspective. The pattern is similar to what surfaced online and confirms those initial revelations of exterior design. Along with tail lamps, a grab handle is also visible on test mule which is going to provide back support to the pillion passenger. In addition, Urbanite will come equipped with a foldable footrest at the back. 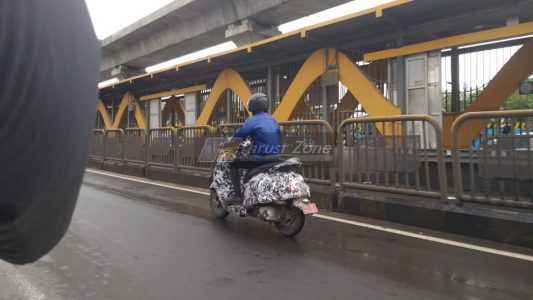 Alloy wheels are expected to be a feature on Bajaj urbanite and the scooter will get a single front suspension system. Details, at the moment, are scarce about engine and transmission but we expect the gearbox to be continuously variable transmission (CVT) unit or an entirely electric scooter, there was a possibility that the scooter doesn’t have a exhaust, pictures are now clear, it does not.

There is no official announcement about the exact launch date of Urbanite brand in India but we guesstimate that Bajaj will launch this all-electric scooter in the Indian market in the upcoming festive season by 2020. Taking a cue from the Maruti-Suzuki, Bajaj will retail Urbanite brand through a new chain of dealerships rather than trading it from its existing network of partners.

Electric Scooter From Bajaj will help the brand to carve a niche in the market while projecting its premium image among the prospective buyers. The company will be targeting intra-city travelers with Urbanite and hope to grab a decent share in the fledgling segment of electric mobility solutions in the automobile market. It is also expected the Urbanite brand will go beyond two-wheeler space and likely to have commercial offering (three-wheeler and four-wheeler) in the future.