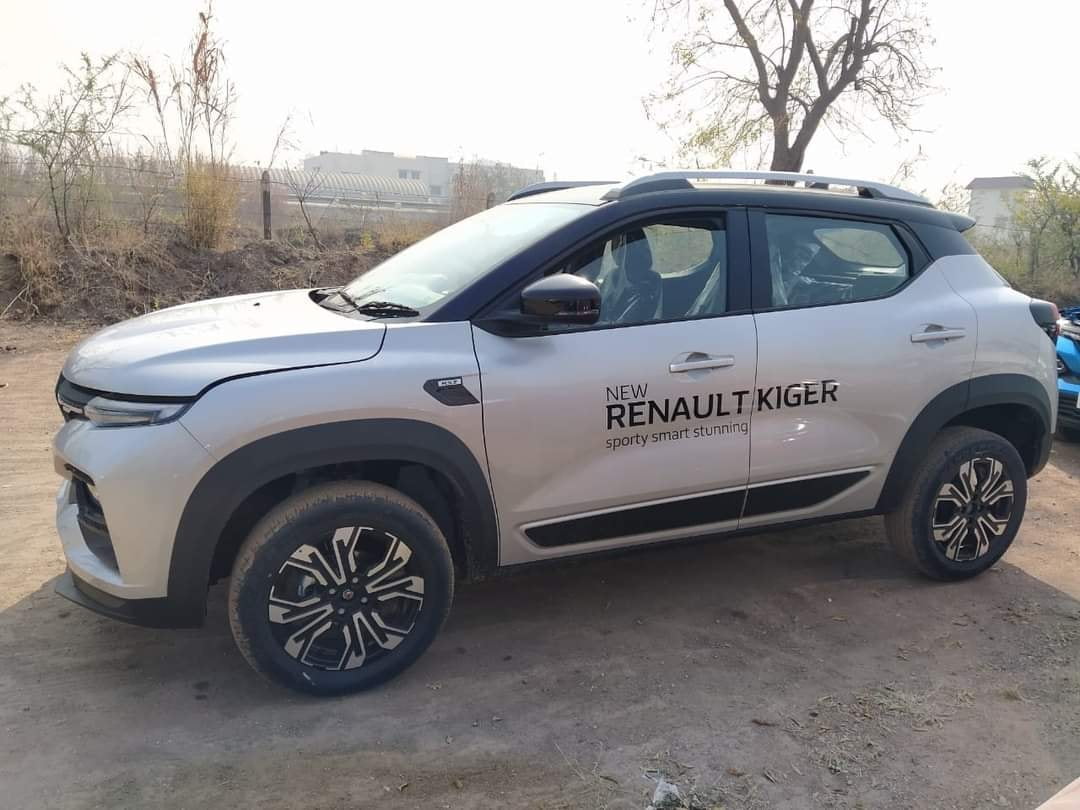 The Renault Kiger will be the newest subcompact SUV to join the segment and the second sub 4-metre SUV to come from the Renault-Nissan alliance. The first, of course, is the Nissan Magnite that has impressed us to quite an extent and hopes are now high from the Renault Kiger too. The new SUV is all set to hit the roads in the next couple of weeks, and ahead of its launch, the model was spotted at a dealership wearing three new exterior colours. The fact that dealers are now stocking the test cars and demo vehicles hints at a launch closer than ever, while the pictures provide a closer look at the new Kiger out in the real world.

The Renault Kiger made its global debut recently and the company did tell us about six paint options on offer – Ice Cool White, Planet Grey, Moonlight Grey, Mahogany Brown, Caspian Blue, and Radiant Red. The new colours do look premium, especially the brown shade, while there will be the dual-tone option with a Mystery Black roof. The red colour will only get the black roof as standard .

Other likeable elements include the split headlamps with the chrome finish, wide grille again finished in chrome and the LED DRLs that add a premium touch. The profile wears 16-inch alloy wheels that are nice and the rear gets C-shaped LED taillights with pronounced wheel arches. The Kiger measures 3991mm in length, 1750mm in width and 1600mm in height, with a wheelbase of 2500mm. The ground clearance stands at 205mm. The Kiger will also get the largest boot in the segment upon launch with a capacity of 405 litres.

Powering the Renault Kiger will be the 1.0-litre three-cylinder naturally aspirated petrol with 72PS and 96Nm of peak torque. The more enjoyable one is the 1.0-litre turbocharged mill with 100PS and 160Nm. Both engines will be paired to a 5-speed manual, while the NA motor will also get an AMT. The turbo engine will come mated to a CVT unit. The Renault Kiger is likely to be priced from Rs. 5.5 lakh (ex-showroom) onwards.