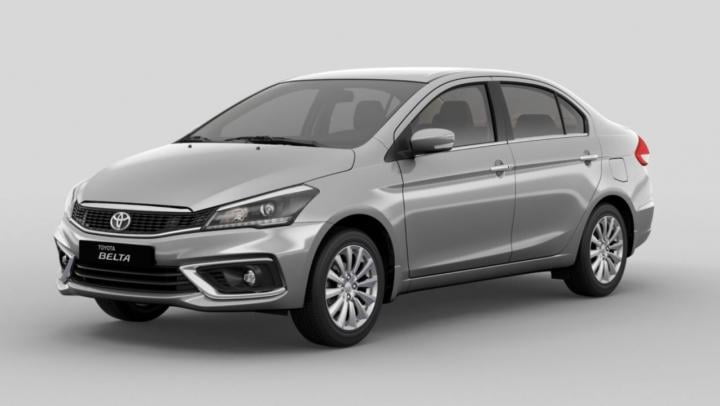 Toyota Kirloskar Motor will soon bring its iteration of the Maruti Suzuki Ciaz that is likely to be called the Belta. The new offering will be the badge-engineered version under the Suzuki-Toyota alliance and the third product to come from that tie-up after the Glanza and the Urban Cruiser. Ever since Toyota discontinued the Yaris in India, speculations of the Belta hitting the showrooms soon have been rife and it seems we are getting closer to the D-day.

New images of the Toyota Belta have emerged online stating its launch in the middle eastern part of the world.

The new Belta is identical to the Ciaz in looks, features, and prices. The front grille is different on the model but do not expect any changes to be beyond the skin. The compact sedan will draw power from the familiar 1.5-litre, four-cylinder mild-hybrid petrol engine that develops 105PS and 138Nm of peak torque. Transmission choices include the 5-speed manual and a 4-speed automatic transmission. Expect prices to be in the vicinity of Rs. 8-12 lakh when the model goes on sale.

The feature list will include projector lens headlamps with LEDs, LED taillights, auto climate control, touchscreen infotainment system with SmartPlay Studio, MID unit, mult-function steering wheel and more. The Ciaz has always been known for its spacious cabin and that will impress those looking for spacious sedan in Toyota’s line-up. Customers will also benefit from Toyota’s famed reliability.

The compact sedan segment is still quite relevant in India, which is why we have the Skoda Slavia and the Volkswagen Virtus also on their way. The Honda City, Hyundai Verna also remain strong contenders in this space. Toyota is yet to officially announce the launch timeline for the new Belta but we do expect the carmaker to bring the model possibly as early as December or maybe in early 2022. The car is manufactured by Maruti Suzuki and then sold to Toyota as part of the agreement.