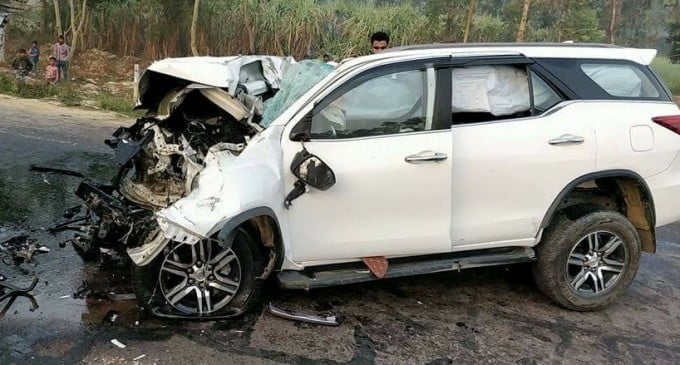 Toyota Fortuner Crashes and four lives are lost despite what it looks like all 7 airbags deployed. The BJP minister was pronounced dead at the spot

A BJP MLA passed away on Wednesday in a road accident in Uttar Pradesh’s Sitapur district while he on his way to the ‘Investors Meet’ in Lucknow. The car he was in was a new Fortuner and was said to be doing very high speeds. The SUV has crashed with a front-end collision and all 4 occupants have died inside. This includes the politicians two security guards and the driver.

Lokendra Singh, the Noorpur (BJP) legislator from Bijnore was identified and was on its way to the much-publicized inauguration by Prime Minister Narendra Modi later in the day. Fortuner rammed head on with a truck coming from the opposite direction at Kakaiyyapara area.

Reports from police suggest that while the driver and Singh, 45, were killed on the spot, the two police gunners died during treatment at a nearby hospital. District Magistrate Sarika Mohan and Superintendent of Police Anand Kulkarni did rush to the scene of the accident to take charge and assess. The security guards who lost their lives have been identified as Brijesh Mishra, 28, and Deepak Kumar, 30. High-speed crash and that too, head-on leaves very less chance for the occupants to survive, we assume the lack of wearing seat belts here could be a major cause for all four occupants on board dead. We will keep you updated on the story as it develops. `