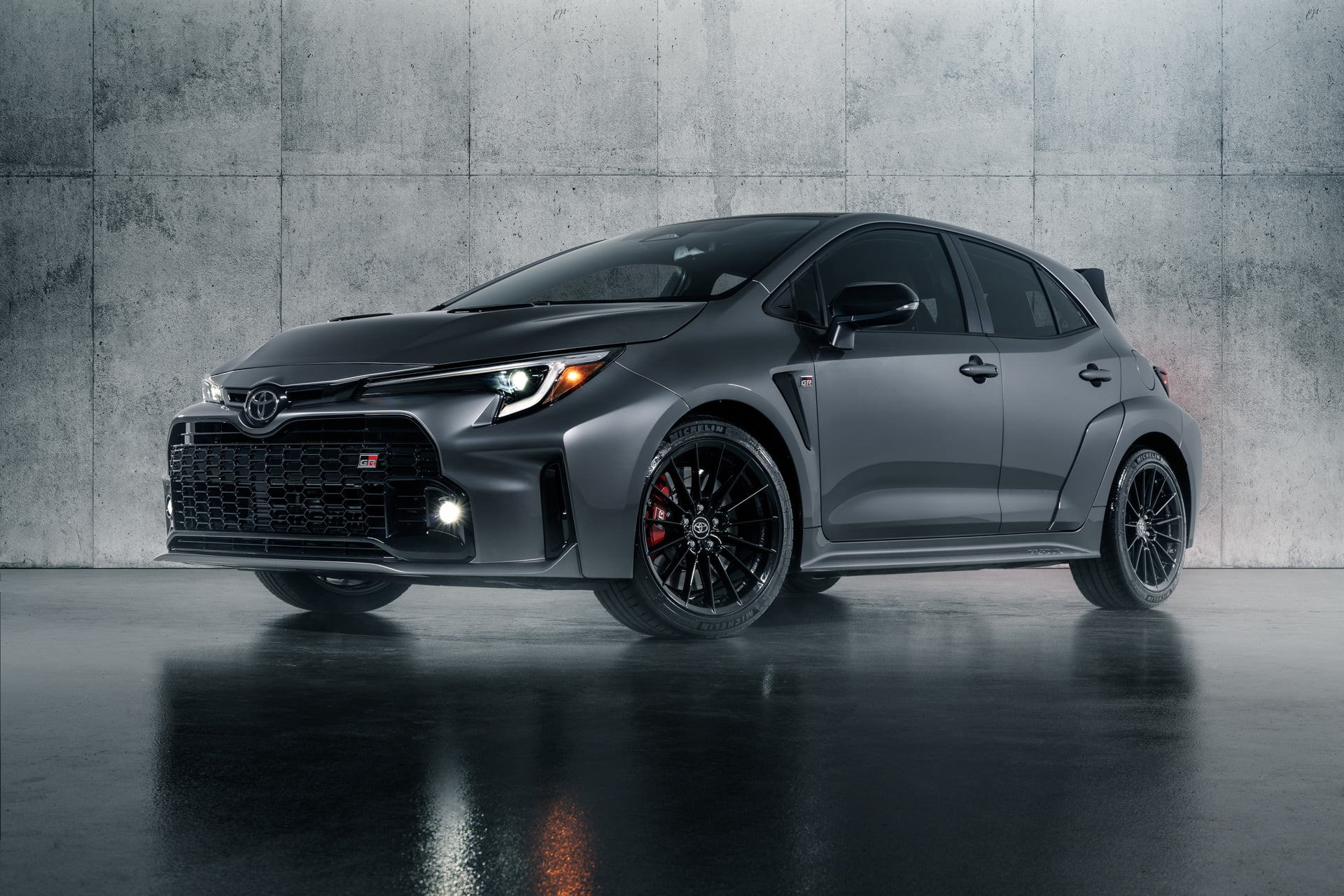 TOYOTA GAZOO Racing (TGR) held the world premiere of the all-new GR Corolla on the eve of the opening round of the Formula Drift*1 season. The GR Corolla is scheduled for launch in Japan in the second half of 2022.

Through such achievements as the TE25 Corolla earning Toyota Motor Corporation’s (Toyota’s) first WRC victory*2 in 1973, followed by the Corolla Levin’s win in the 1,000 Lakes Rally*3 in 1975, the Corolla laid the foundation for TGR’s concept of “making ever-better motorsports-bred cars” and is a model loved by many for its driving performance. The GR Corolla sprang to life based on the strong desire of Toyota President Akio Toyoda, a.k.a. Morizo, to “bring back a Corolla that captivates our customers”.

In response to that desire, the development of the GR Corolla carried forth the torch of making ever-better motorsports-bred cars, which focuses on honing cars to win races and making them commercially available. In concrete terms, the vehicle was comprehensively reforged in the extreme environment of racing by participating in the Super Taikyu Series using a hydrogen engine-equipped Corolla*4 to also refine a hydrogen engine, which comprises new technologies, with Toyota Master Driver Morizo, himself, taking stints behind the wheel. Furthermore, to ensure that the vehicle could be driven with confidence and enjoyment in a variety of situations, prototypes were put through their paces not only on racing circuits but also on highly demanding dirt roads and snow-covered roads. Driving was done beyond the breaking point for comprehensive honing by drivers who each have unique perspectives, including Morizo, racing driver Hiroaki Ishiura, All Japan Rally Championship winner Norihiko Katsuta, and in-house evaluators. 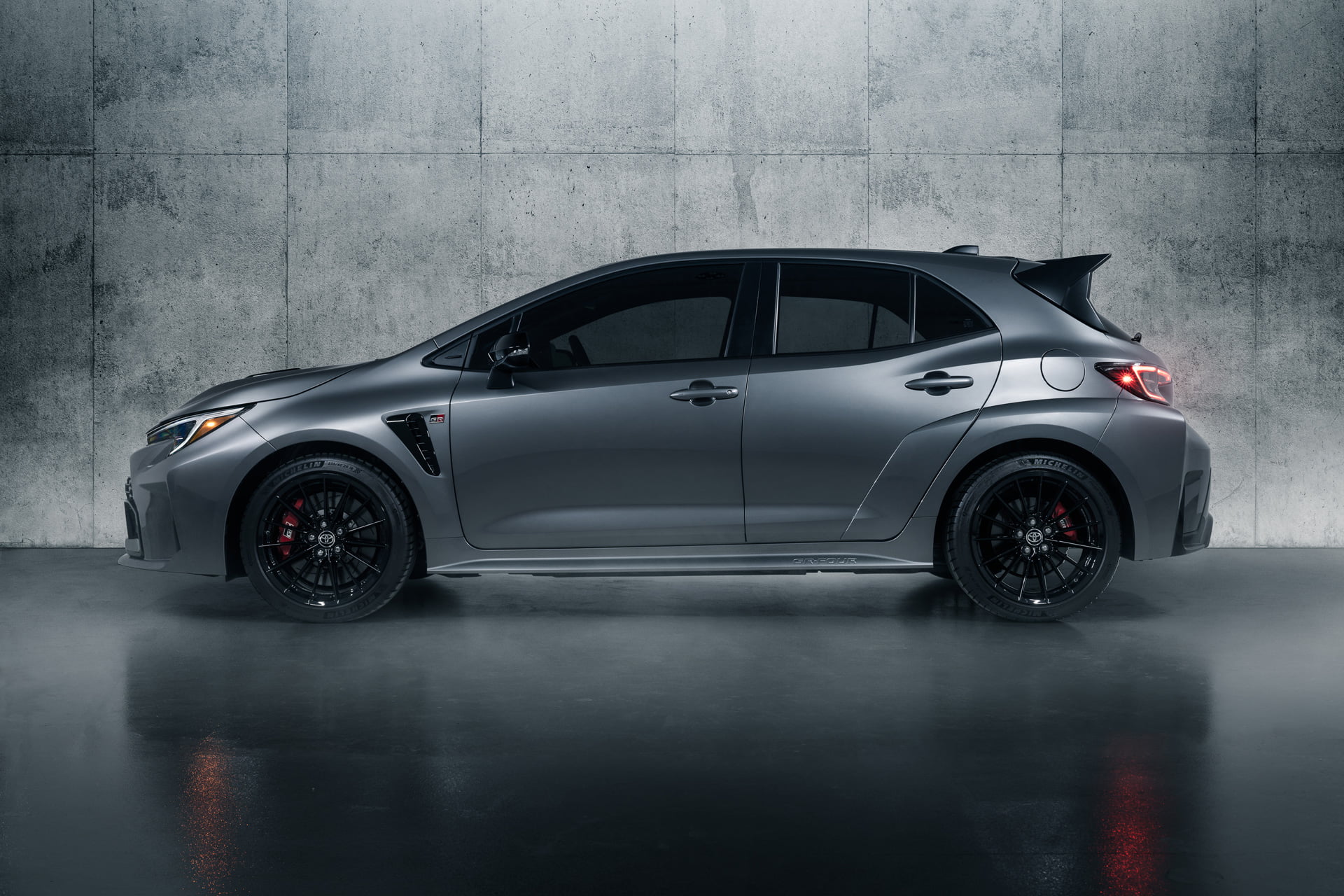 The GR Corolla boasts a strengthened version of the 1.6-liter in-line three-cylinder intercooler turbo engine found in the GR Yaris, resulting in a maximum output of 224 kW (304 PS). Optimizing the GR-FOUR 4WD system, which is also featured on the GR Yaris, to match the specifications of the GR Corolla was among various initiatives undertaken to create a car that can be safely and securely controlled even when pushing it to its limits.

While adopting the basic body framework of the Toyota Corolla Sport to enable it to inherit the high-speed stability of a long wheelbase, the GR Corolla employs a 60 mm wider track up front and an 85 mm wider track in the rear to command a high level of cornering performance. The result: sporty driving at will with peace of mind. And to complete the package, the GR Corolla retains a five-door, five-passenger layout for both exceptional usability in daily life and driving pleasure. 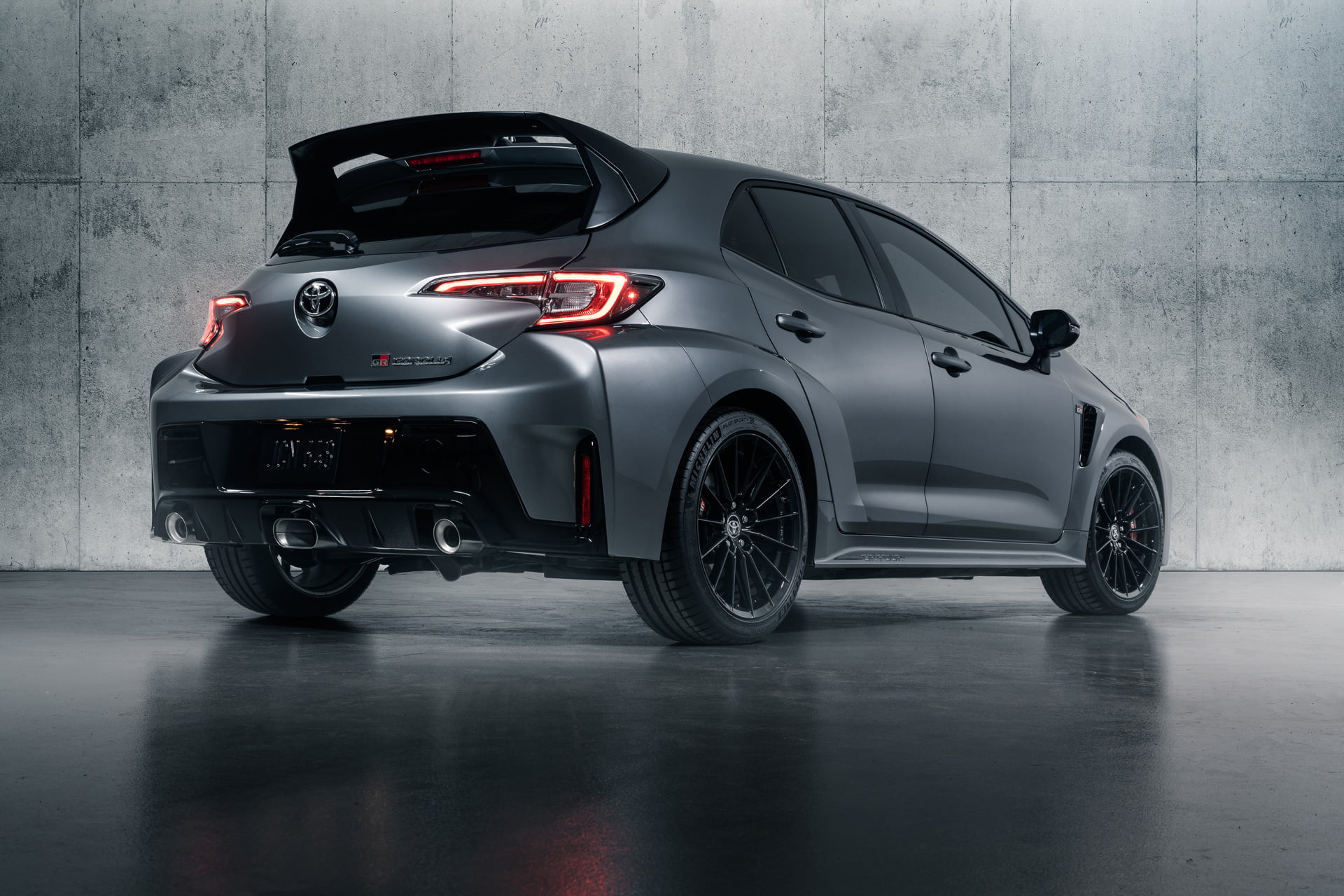 Since its birth in 1966, the Corolla has evolved throughout its generations into a variety of sedans, wagons, hatchbacks, and SUVs to meet the changing lifestyles of Toyota customers over time. With the GR Corolla joining the lineup as a sports car packed tight with driving performance and functionality ready to be embraced by many customers, the Corolla series will keep on continuing to evolve.

While the basic body framework of the Corolla Sport has been adopted, 20 mm wider front fenders and 30 mm wider rear fenders produce a broader stance that foreshadows a spirited driving experience.

The triple exhausts of a muffler created to further increase the output of the 1.6-liter in-line three-cylinder intercooler turbo engine emphasize the unique, powerful, and sporty rear.

Honing the vehicle’s cooling and aerodynamic performance on all kinds of roads, including racing circuits, dirt roads, and snow-covered roads, resulted in the inclusion of a front-bumper air intake and front-fender and hood-bulge air outlets. 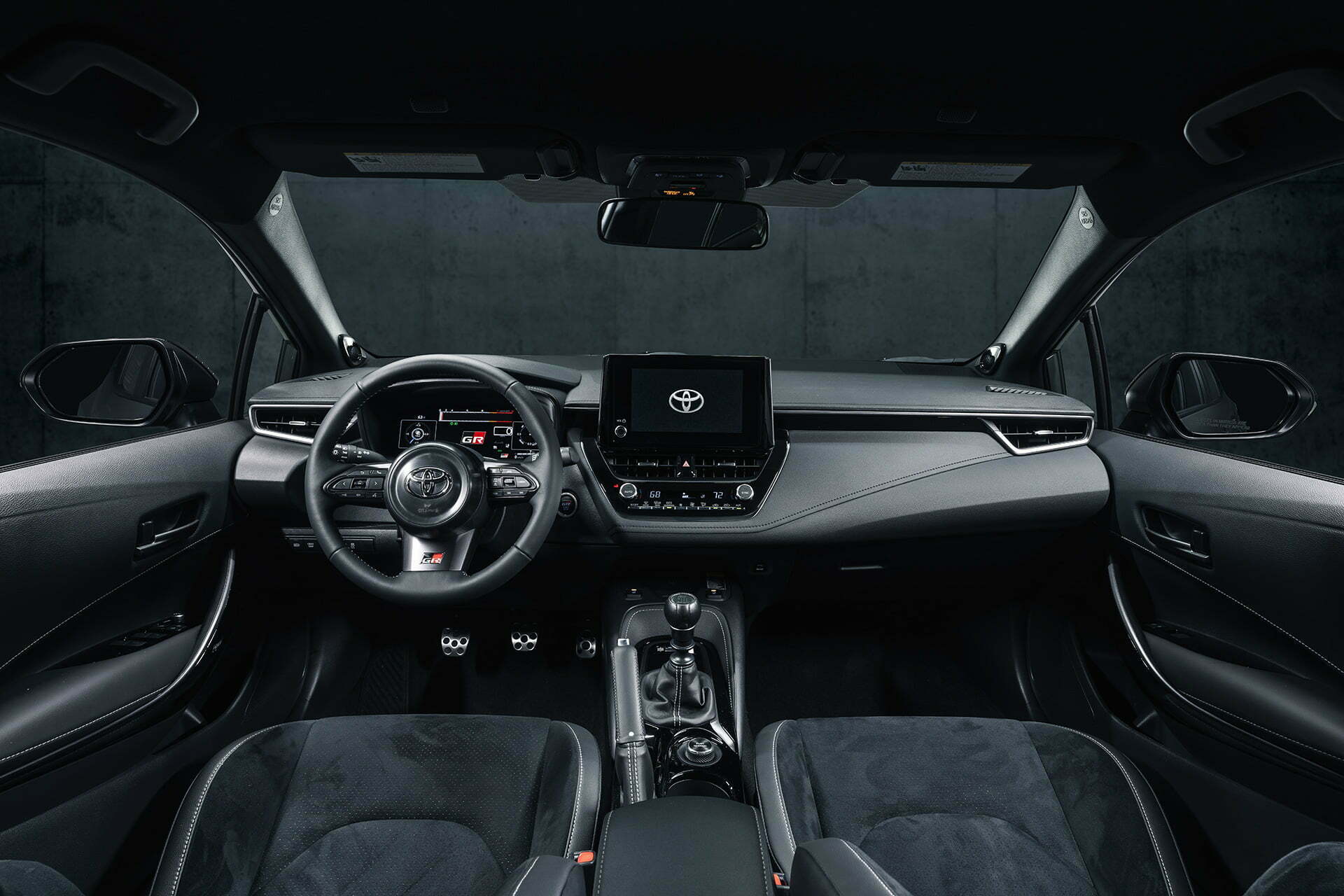 A short-stroke shift lever positioned for natural operation by simply lowering the arm from the steering wheel enables quick gear changes. A hand-operated parking brake has been used to allow better vehicle control even when pushing the car to its limits, such as when drifting.

The Full TFT Meter, which was developed exclusively for GR models, has been newly adopted. Inspired by race cars and reflecting insight from professional drivers, the new display improves visibility during sporty driving.

An evolved version of the GR Yaris 1.6-liter in-line three-cylinder intercooler turbo engine
Engine exhaust efficiency was improved to achieve even higher output from the same compact, lightweight, high-power unit that propels the GR Yaris. A valve-equipped triple-exhaust muffler reduces both exhaust pressure and noise. In sum, the engine provides overwhelming acceleration and a more-pleasant extension of RPMs.

A wide track and long wheelbase for excellent driving stability and control
The basic body framework of the Toyota Corolla Sport has been adopted, and, while retaining the excellent driving stability provided by a long wheelbase, high-speed cornering performance has been improved by widening the track by 60 mm up front and by 85 mm in the rear. Stability and control during sporty driving have been greatly enhanced, allowing confidence and enjoyment while driving as one pleases, even when pushing the car to its limits. 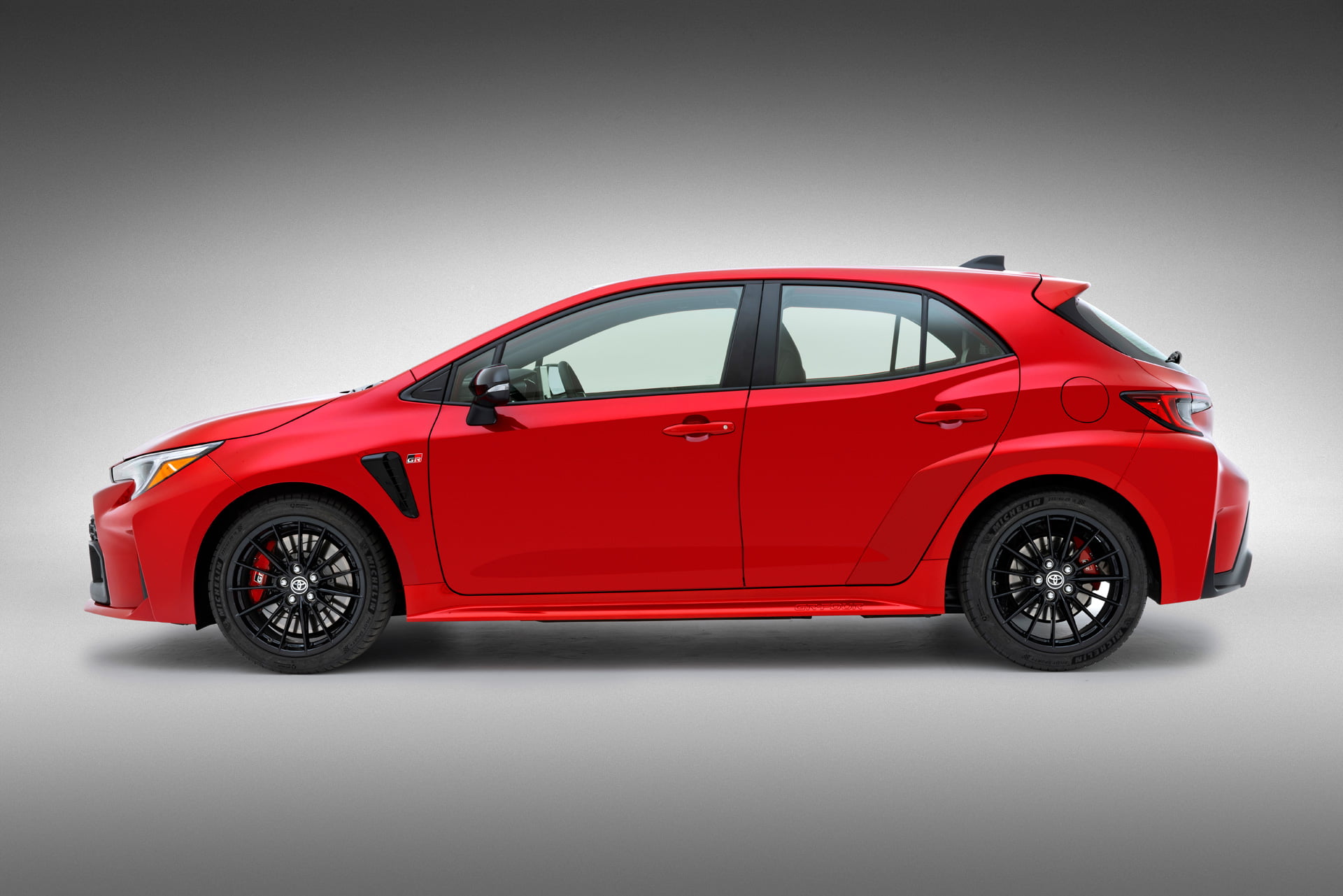 The featured GR-FOUR 4WD system uses an electronic multi-plate clutch to provide variable front and rear driving force, like in the GR Yaris. This time, however, the system’s “4WD” mode, which controls driving force distribution, and its “Drive” mode, which controls accelerator response, steering, and others, have been separated to enable selection according to driver preference and the driving environment. Furthermore, the use of pillow-ball bushings and the optimization of the springs, shock absorbers, and wheel alignment combine to fully transmit the GR-FOUR’s optimal distribution of driving force to the road surface. This has resulted in overwhelming cornering performance.

Body rigidity has been strengthened to achieve driving performance that agilely responds to driver operation. In addition to the high-rigidity basic framework made possible through production at the GR Factory at Toyota’s Motomachi Plant, braces have been added between the rear wheel wells, to the under-floor tunnel, and under the floor in front of the fuel tank to improve handling stability. Also, like in the case of the GR Yaris, the roof panel is made of CFRP*5 molded by the SMC*6 process, which offers a high degree of freedom of shape and contributes not only to increased rigidity but also to weight reduction.