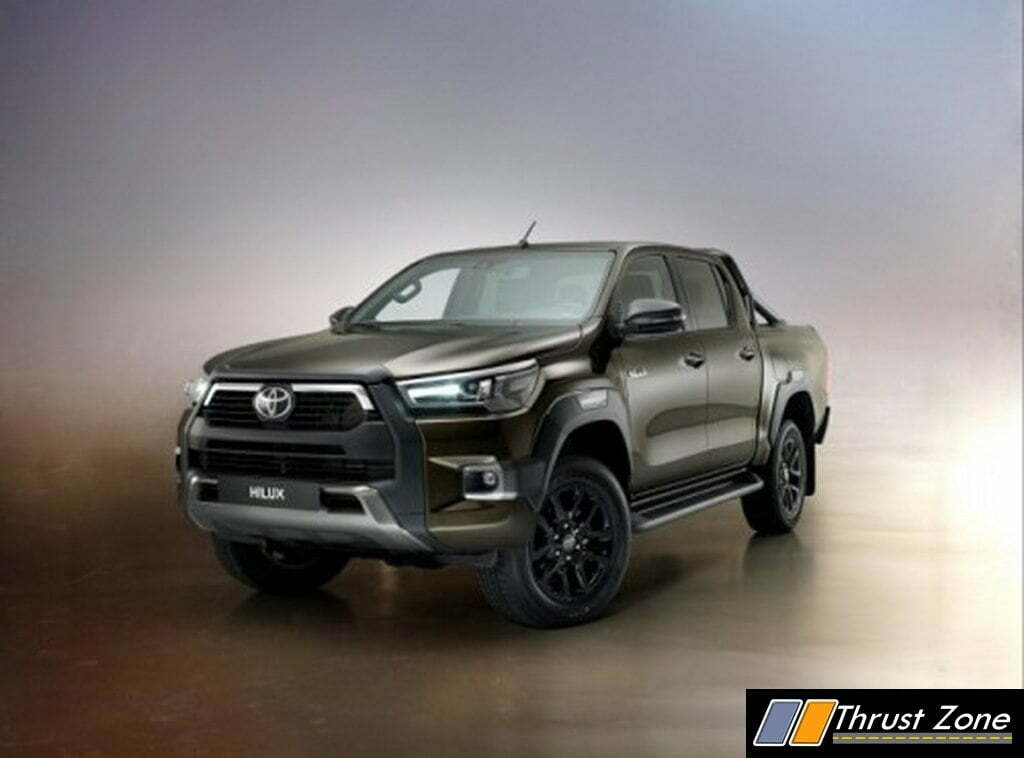 The new Hilux combines a striking new design, the addition of a powerful 2.8 litre powertrain and improvements to both its on- and off-road performance with greater comfort, upgraded equipment and an expanded model range targeting Europe’s growing dual-usage, leisure markets. Earlier, it has been confirmed for India launch in early 2022 say multiple reports. Today, it has been spied in red color shooting for a TVC in Delhi. 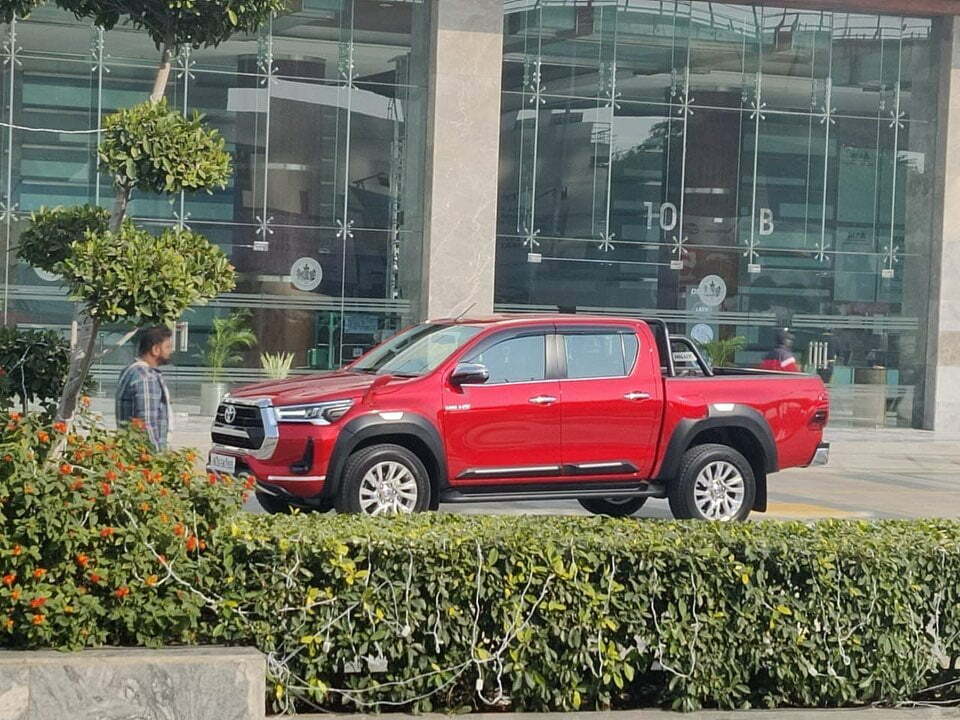 Highlights of the Hilux

Since its launch in 1968, the unstoppable Hilux has proved its invincibility time and again, having conquered the North Pole, Icelandic volcanoes, the Antarctic and a win in the Dakar Rally in 2019. Hilux’s 1 tonne payload and 3.5 tonne towing capability has now been expanded to all 4-wheel drive body types (Single Cab, Extra Cab and Double Cab).

The face of the new Hilux has been completely redesigned with a new bold & powerful three-dimensional grille and front bumper treatment, which significantly increases the pick-up’s road presence and strong stature, whilst reinforcing its tough, robust, go-anywhere credentials.

The upgraded interior features a new driver’s combimeter design, and a new, 8″ centre console-mounted infotainment screen which adopts mechanical buttons and dials for enhanced operability under all driving conditions. The enhanced multimedia system features faster software and screen response, and incorporates both Apple CarPlay® and Android Auto™ for smartphone integration.

Reinforcing the exclusivity of the new Hilux range, a wide range of accessories will enable customers to further tailor their vehicles to their own work or leisure requirements. These include a resin sports bar, an electric aluminium roll cover, tailgate locking, a hardtop and a 12v deck-mounted power supply.

The new Hilux powertrain range has been bolstered by the addition of a new, more powerful 2.8 litre, 204 DIN hp* diesel engine, equipping the Toyota pick-up with highly competitive performance in its segment. 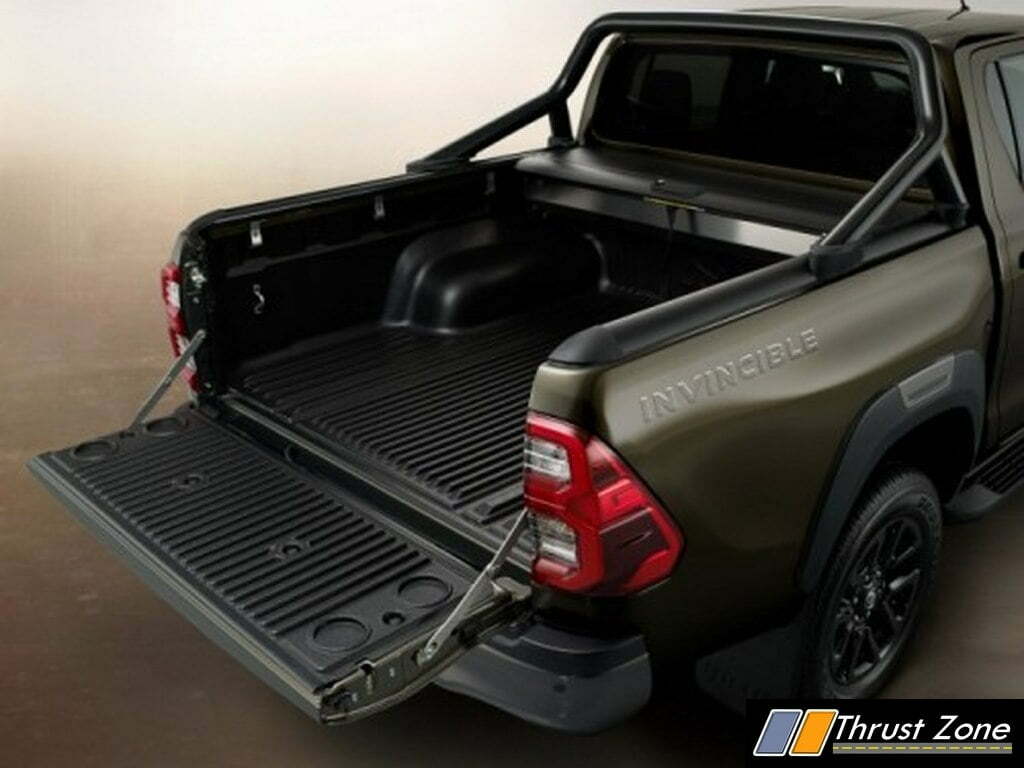 Targeting the most demanding double-usage and leisure Hilux customers, the new 2.8 litre powertrain will be available in Extra Cab and Double Cab body styles, with a choice of 6-speed manual or 6-speed automatic transmissions mated to 4-wheel drive.

For the new Hilux, the engineers target was to keep legendary off-road capabilities while improving on-road comfort. To ensure extreme off-road conditions, Hilux in one of the few still true to its body-on-frame architecture which can withstand twisting forces better and more durably.

The comfort and driveability of the new Hilux has been enhanced through improvements to the suspension and power steering systems. The suspension benefits from front and rear shock absorber tuning, improved leaf spring design and new bushing to combine a smoother ride with reduced impact on steps and holes.

The Hilux’s already peerless off-road credentials have been further enhanced by a new electronic function replicating the effect of a mechanical LSD (on 2WD models); the lowering of engine speed at idle from 850 to 680 rpm and a tuned accelerator response for greater driver control; an updated VSC system; and a new tyre angle monitor.

Top of new Hilux range, and available in Extra Cab and Double Cab variants, the Invincible grade is tailored for dual-usage and leisure users who want all convenience and diverse capabilities of a pick-up combined with more adventurous and sophisticated styling and the highest levels of equipment specification.

Invincible-exclusive exterior styling details include bespoke front grille and bumper, skid plate, over fender, door handle, wheel and tailgate designs. On board, Invincible builds on the High grade specification with an exclusive driver’s combimeter, black metallic and black chrome trim accents, and even a grade-exclusive smart entry key. On Double Cab, ‘clear blue’ front and rear door trim illumination and dual tone perforated leather seats are added to enhance the cabin appeal. Sales of the new Hilux could start from early 2022 For Toyota in India. The pickup has competition awaiting it from Isuzu.

Tork T6X Electric Motorcycle Spotted Testing Ahead Of Launch In 2022