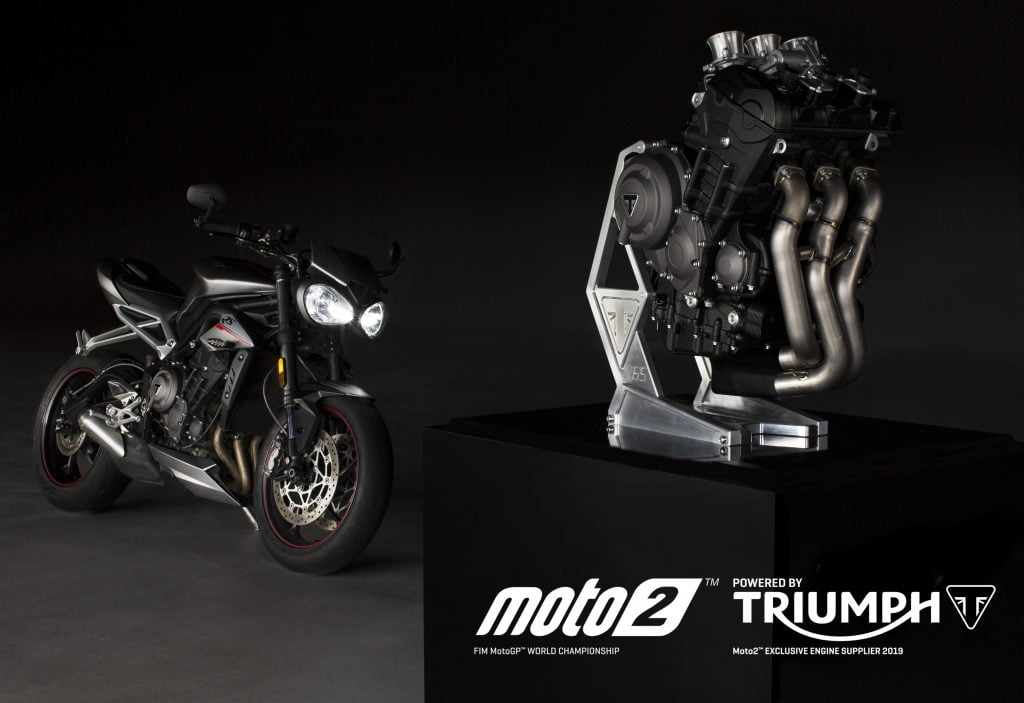 Triumph FIM Moto2TM Deal was in the news for quite some time, today the official announcements makes it loud and clear

Triumph Motorcycles has been announced as the exclusive engine supplier to the FIM Moto2TM World Championship from the 2019 season onwards.

Triumph has signed a three-year contract with Dorna who are the commercial rights holder of MotoGPTM as the British manufacturer is set to supply a dedicated race tuned 765cc Triumph triple engine, based on the powerplant from the all-new 2017 Triumph Street Triple. The new engine is a significant development of the race-winning Daytona 675R powerplant that has powered supersports championships. This engine has helped win races at the Isle of Man TT, Daytona 200 and British Supersports Championships in 2014 and 2015.

Based on the highest specification 765cc powerplant from the Street Triple RS it has been developed for Moto2TM with the following modifications over the standard model, which is already a the best spec from Triumph till today. List is below of the changes for the race bike even further. In road set-up already, for all the consumers worldwide, the new 765cc engine delivers the highest ever level of performance for a Street Triple; delivering power of 123PS @ 11,700 RPM and 77Nm Torque @ 10000 RPM. It has more than 80 new parts compared to the previous generation engine, including an increase to the bore and stroke. All-new engine components include new crank, new pistons, new con-rods and balancer shaft, Nikasil plated aluminium barrels and a revised gearbox.

The race specification Triumph 765cc Moto2 engine has been developed further to allow the engine to breathe more freely and rev harder than the production bike, something that helps in increasing overall performance. Other changes have been made specifically to adapt the engine for race use.