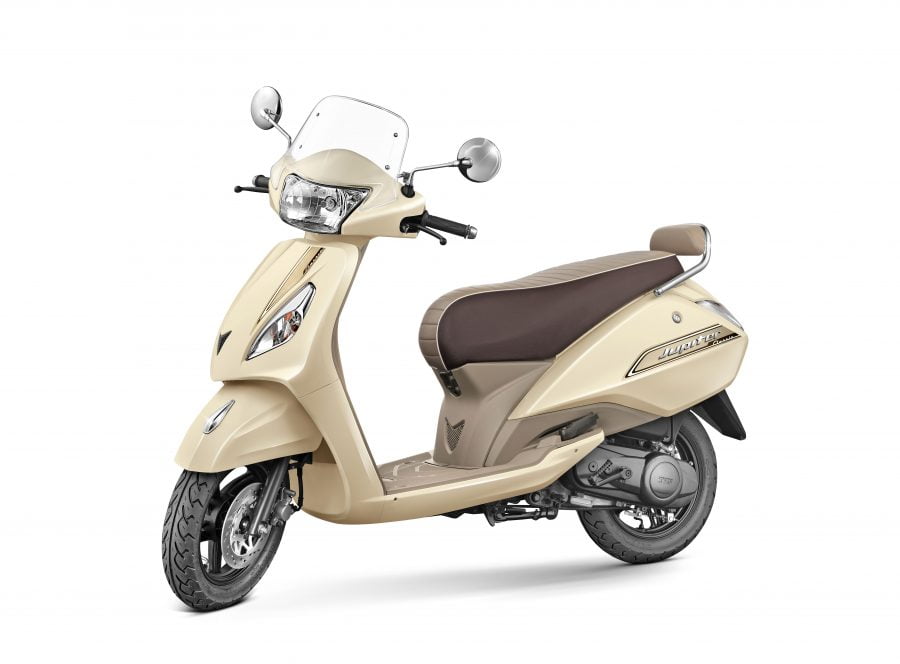 TVS Jupiter Classic tries to look a bit like the Vespa and almost succeeds at it as well. Jupiter is a runaway success and TVS wants to hold the momentum

TVS has been a well-known name in the two wheeler world, especially in the desi market. Needless to say, all its two-wheelers have ruled the desi market efficiently. Also, the company’s vehicles have been high performers in addition to their economical rates. However, in the past few years, the company’s most uprising two-wheeler, Jupiter has proved itself to be a successful model devised by the firm. Jupiter’s functioning and its characteristics has been applauded by most of its customers throughout the country.
Much recently, the TVS Motor Company has declared the launch of the all new Jupiter Classic edition.

TVS Jupiter Classic edition is capable of producing a power developed by an astonishingly similar 110cc engine that lets out 7.8 horsepower at 7500 rpm and 8Nm of torque at 5500 rpm. The scooter in addition to the above stated features, also possesses the company’s patented economical meter that guides the riders in both eco mode and power mode. The TVS Jupiter Classic Edition boasts a stunning price rate of 55,266 and will soon be available in all TVS dealerships across the country.

Mr. AniruddhaHaldar, Vice President of the marketing department, of the company commented that the classic edition of the Jupiter will very much serve the needs of its customers in all possible aspects. He also claimed that the vehicle possesses unique features covering the exterior style, practicality and value, which will very much prove to be the vehicle’s promising features. He had also stated that millions of folks have continually reposed their trust in TVS Jupiter and that serves as their great dose of motivation and confidence for the company.