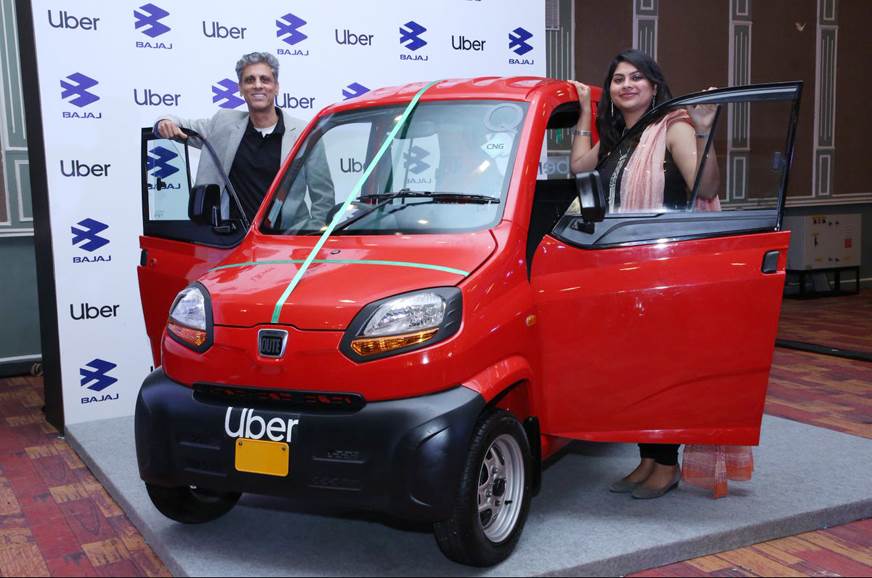 We all use Uber at times, we even have choices for our ride. Prime, Sedan, XUV and now even more, Bajaj just launched it’s Qute taxi on the Uber app under XS option.
After all the delay, stay orders, postponed launch events here we have Bajaj’s Qute. Better late than never as the idea was conveyed sometime during 2013. The Bajaj Qute was supposedly presented as a substitute forthe rickshaw but a step ahead in terms of safety.

All this delay essentially let the hype for Bajaj Qute to fade but now that Bajaj has joined hands with Uber, the Qute has an all new platform for itself and that’s the XS category. The category label says enough about Qute’s form and function.

Now walking up ahead in the categories for Uber rides, Bajaj Qute settles itself between Uber Auto and Uber Go. Now Uber Go usually complies of hatchbacks, likes of Etios, WagonR and has a fare compensating to the type of ride.With Bajaj Qute falling under XS category, it is likely to be more easy on the customer’s pocket.

Presenting a product that’s fresh out of the oven but has a difficult past in presenting itself is tough to sell in the market, no matter how well it fits the bill and Bajaj Qute had to follow if not more then a similar rough patch.

It wasn’t an all expenses paid joyride for Bajaj to launch the Qute under the passenger vehicle segment but with Uber it has been done already and is available in the fleet, but we are not yet sure with the number of vehicles held for the XS fleet. Bajaj Qute is available in Petrol and CNG. The latter one is being used for the Qute (s) set out in XS fleet with an expected mileage of 40kms/kilogrammes of CNG.