UNESCO And Royal Enfield Flag Off For Promotion Of ICHI 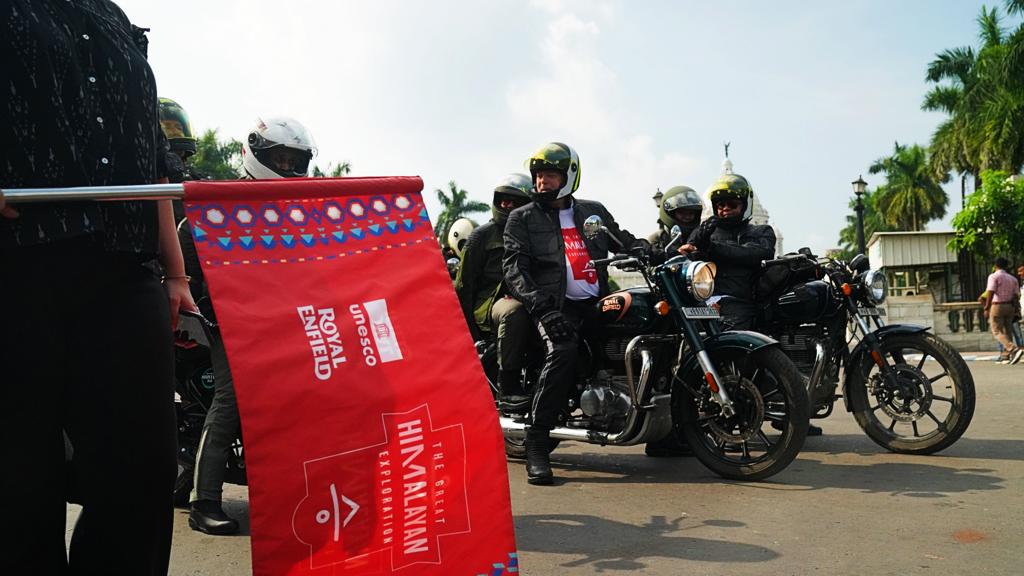 UNESCO (United Nations Educational, Scientific and Cultural Organisation) and Royal Enfield flagged-off ‘The Great Himalayan Exploration’ ride at the iconic Victoria Memorial in Kolkata, today. This unique partnership aims to contribute to the documentation, preservation and promotion of the Intangible Cultural Heritage of India.

“India possesses a multitude of undiscovered cultural heritage practices that are passed down from generation to generation. With our partnership with Royal Enfield we want to contribute to the collective knowledge and to the efforts of the Government of India to inventory all these Intangible Cultural Heritage practices,” said Eric Falt, at the flag-off ceremony.

“As part of our social mission, Royal Enfield aims to partner with 100 Himalayan communities to build resilience and drive long lasting change. We also intend to catalyse a global movement of 1 million riders who can actively partner with us in our endeavour. Through this unique partnership with UNESCO, we are connecting our rider community with the Himalayan communities in a bid to actively identify and preserve their living heritage.” said Bidisha Dey.

As part of the capacity building, the riders, including a team of more than 20 rider-researchers, began a first journey to Pattachitra Gram (Village of the Scroll Painters) in Pingla Block – a UNESCO ICH showcase, over 100 kms away in the West Medinipur District. At Pattachitra Gram, the riders were welcomed by the chitrakar community with a richly decorated atmosphere, laden with Pattachitra art and garlanded in the traditional welcome of the Chitrakar community.

As part of the experience, the team were given a tour of the village and the resource centre where the artists showcased the techniques they use to create the dyes and paint, as well as the end purpose of Pattachitra, which is its use as a prop and a backdrop in folk songs. Recognised as one of the oldest art forms in the world, the art of Pattachitra is documented by UNESCO and is handed down through generations.

After the flag-off and the ride to Pattachitra Gram, the rider-researchers will split into four groups and head towards Meghalaya, Assam and Ziro in Arunachal Pradesh. Drawn from all over the Indian motorcycle-riding community, these riders will spend two weeks documenting specific Intangible Cultural Heritage practices that have been identified by a research team in collaboration with UNESCO. This will be followed by a series of research-based rides across the Himalayan region in the next few months to document these practices.

This undertaking, as part of the unique partnership between UNESCO and Royal Enfield, which was announced recently, is an attempt to document the Intangible Cultural Heritage practices of India, beginning with the Himalayas. The goal is to create a digital repository of the wealth of information that the rider-researchers will collect. Additionally, we will also use this activity as a stepping stone to Royal Enfield’s larger goal of partnering with 100 communities across the Himalayas to drive one toward a sustainable future.

UNESCO recently inscribed ‘Durga Puja in Kolkata’ on its prestigious Representative List of the Intangible Cultural Heritage of Humanity. Known for its celebration of feminine divinity, Durga Puja is also an embodiment of inclusive festivity. A consummate expression of dance, music, crafts, rituals, culinary and cultural aspects, the festival transcends social boundaries and brings people together in celebration.