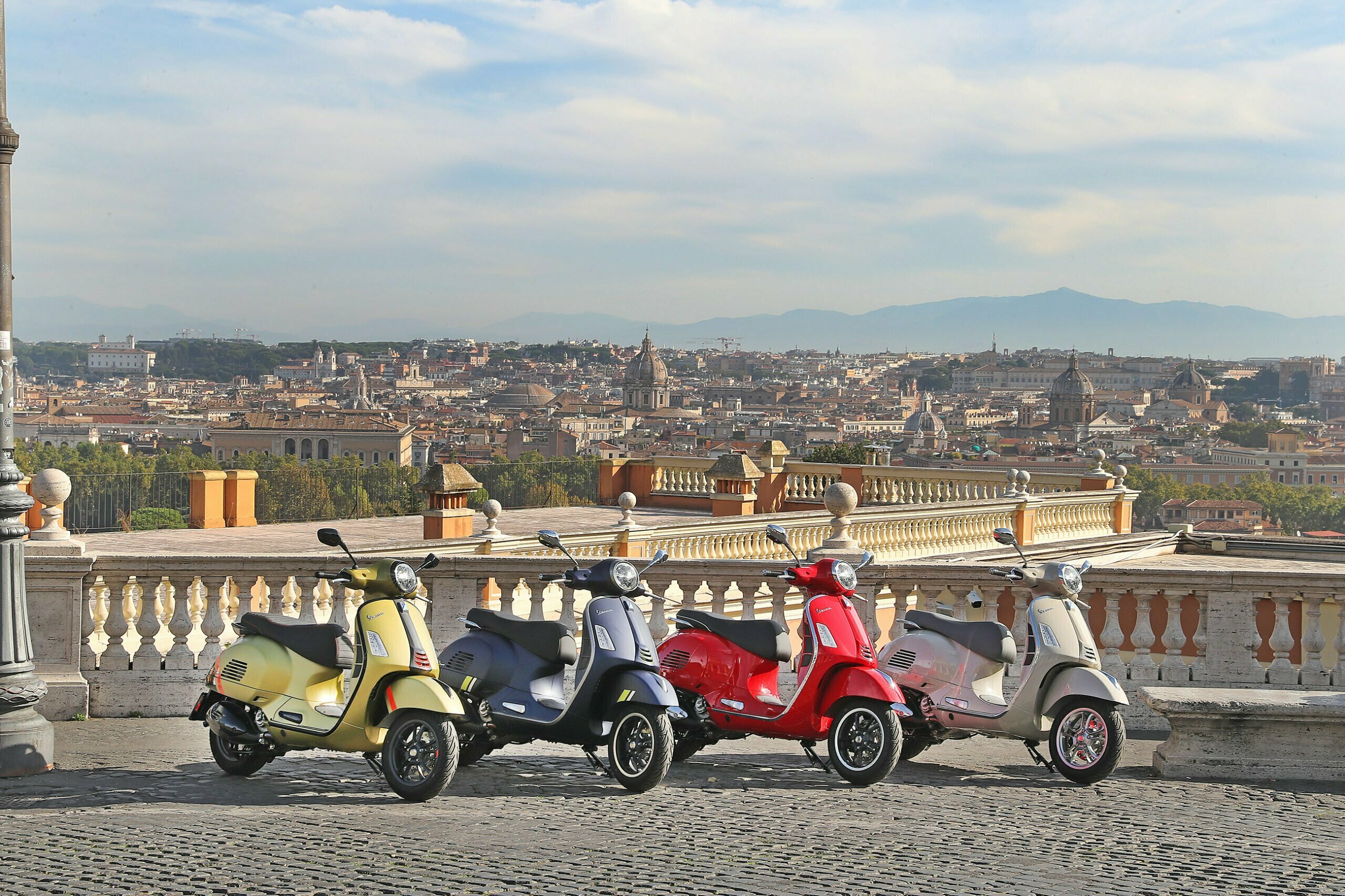 Vespa Gts will go down as one of the world’s best-loved two-wheelers as it follows on from the legendary “Vespone”, the name given to those Vespas with a larger, strictly steel body. Vespas with which to move elegantly around town but that are also ready to travel, or even adventure thanks to their increasingly generous engines. It has clearly evolved stylistically, maintaining that magical balance between tradition and modernity that comes out in the lines of the Gts, painstakingly refined down to the smallest detail, thereby elevating the perceived quality to unprecedented levels. The “neck tie” on the front shield is new, as well as the metallic profiles of the body, now available in different finishes, whereas the entire lighting system is fully LED. The rear part has also been revisited, introducing new side panels, a new license plate bracket, and new shapes for the lighting system. Also brand new are the mirrors, the handlebar, now wider and ergonomic, and the electrical controls, whereas new instrumentation has been introduced that contains even more information, and the keyless system. The saddle is also new, more comfortable and more refined, which allows the riders feet to rest better on the ground. In terms of comfort, the new Vespa Gts takes a bold step forward, also thanks to the new front suspension with more controlled operation and better capability to absorb any type of bump. The more efficient and powerful braking system is also new. ABS and the rear wheel traction control system come standard. There are four versions in the range differed by their equipment packages and colour variants (for a total of 14 available colours), whereas 2 engines are available for the new Vespa Gts: the 300 hpe, capable of almost 24 HP, the most powerful engine ever mounted in a factory Vespa, and the 125 of the i-get series, featuring Start & Stop, brilliant performance, and truly low fuel consumption.

Vespa Gtv
Built on the Vespa Gts base, the Vespa Gtv is born with a completely revolutionised look, maintaining the inevitable traits of the legend’s origins, but combining them with an ultra modern technological equipment package and brand new sporty finishes. The result is an extraordinary marriage of tradition and modernity, classicism and aggressiveness, which manifests itself in the most authentically sporty Vespa ever.

The characteristic low headlamp has LED technology, whereas the new instrumentation maintains the elegant circular shape but it is entirely digital, a solution that makes it possible to take full advantage of the features offered by the Vespa MIA connectivity system, available as a separate accessory. The instrumentation is connected to the handlebar using an original cantilevered bracket and enveloped by a small yet aggressive top fairing with clear sport inspiration. At the centre of the front shield, the unmistakeable “neck-tie” has sporty lateral slits and is enhanced by decorations with orange edging. The five-spoke design of the wheel rims is also new, painted matt black with an orange graphic on the channel. Another distinctive element of Vespa Gtv is the single-seat two-tone saddle with a racing look and the rear part which is installation read for a hard cover colour coded to match the body, reminiscent of the typical racing Vespa fairings. The cover is available as a separate accessory and can be removed.

The new Vespa Primavera Color Vibe, is a tribute to the colourful and carefree Vespa universe. Vespa Primavera Color Vibe is characterised by a special two-tone livery: the body, available in the Arancio Impulsivo and Bianco Innocente shades, is matched with a footboard in Ottanio, a bold and decisive shade of turquoise.
An original contrasting colour “stain” which, outlined in black, runs diagonally across the entire body through the dedicated graphics on the sides of the front shield and side panels. The decorations of the typical steering cover on the front shield are also in Ottanio, as well as the exclusive wheel rims, made only for this version in a special glossy metallic finish. Yet more proof of Vespa’s eclectic nature, the outfitting is completed by sporty black trim: the headlamp and taillight frames, the profile that runs along the front shield, the crest on the front mudguard, the front suspension spring and guard, the passenger grab handle, and the silencer cover. The saddle is black with anthracite stitching.

Ten years on, Vespa 946 makes its debut in the special 10° Anniversario outfit, with an exclusive dedicated colour that’s a modern take on a classic Vespa shade, green. In keeping with its role as trendsetter, Vespa 946 10° Anniversario sports a shade which is soft and velvety, but has a hint of acidity that makes it highly original. It’s no coincidence that this shade emerged as a trend in the Spring Summer 2023 fashion collections at the New York, London and Milan Fashion Weeks. The pearlescent colour appears pastel at first glance, but then gains depth with illumination.