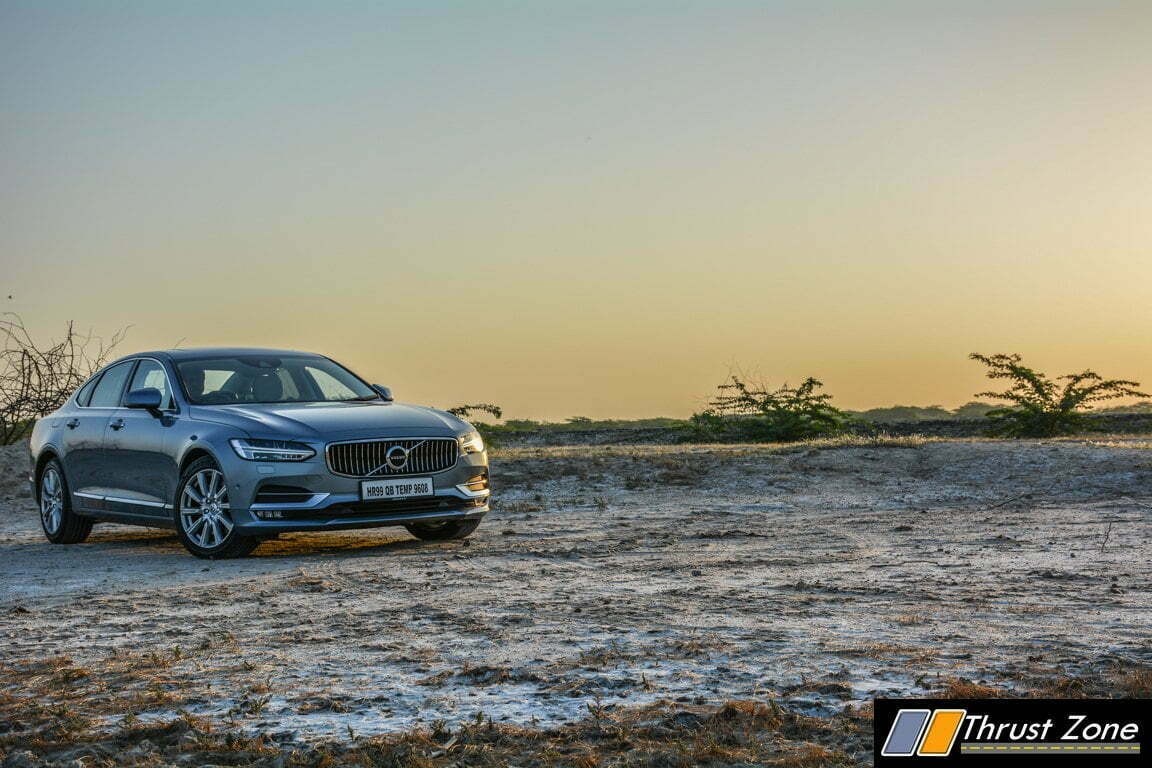 All New Volvo S90 seems at the top when you consider comfort, luxury and is almost fun to drive too, but design takes all the credit

Volvo as a brand in the Indian market is known for giving the mass market luxury experience through its commercial bus fleet. Blame the fleet company for bringing the word ‘Volvo’ to make sure they attract customers. Volvo on the other hand has been synonymous with the same worldwide, trucks and one of a kind safety innovations for all its vehicles. Right from trucks to cars. Volvo cars on the other hand has made solid cars inside out for decades now.

Owned by Ford in the past, the American company was providing chassis brains and engines to the company. Solid build, fun to drive along with guaranteed luxury and safety was a combination that helped Volvo stay in the market. While the brand never took of as the Germans And British did, it realized that soon enough and started making bold claims of making new revolutionary engines along with coming with a new platform to spawn vehicles in every single category where its rivals exist. 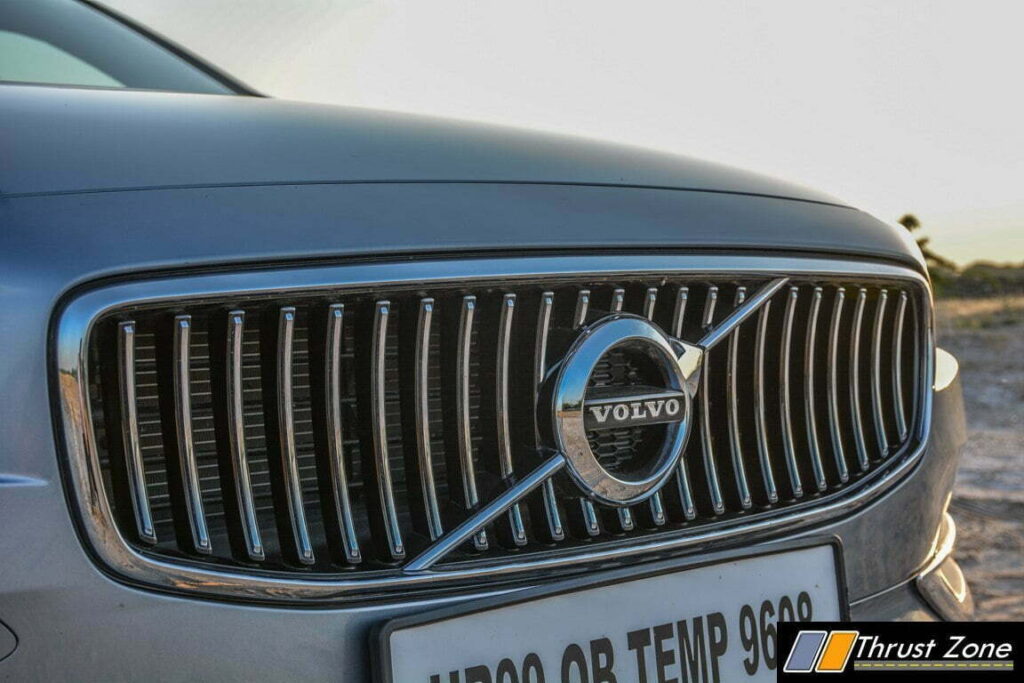 All of this started with the XC90 and it blew the minds of critics and customers as what could Volvo actually offer in today’s date. Based on the same SPA platform, the Swedish manufacturer is now offering a saloon. The S90 is primarily targeted at the BMW 5-Series and Mercedes-Benz E-Class which are brand new in the market today as we speak. We are in cultural rich part of the country, Rajasthan, to sample the S90 to find out is it majestic enough to woo its customer base. Here’s our first take on the S90! 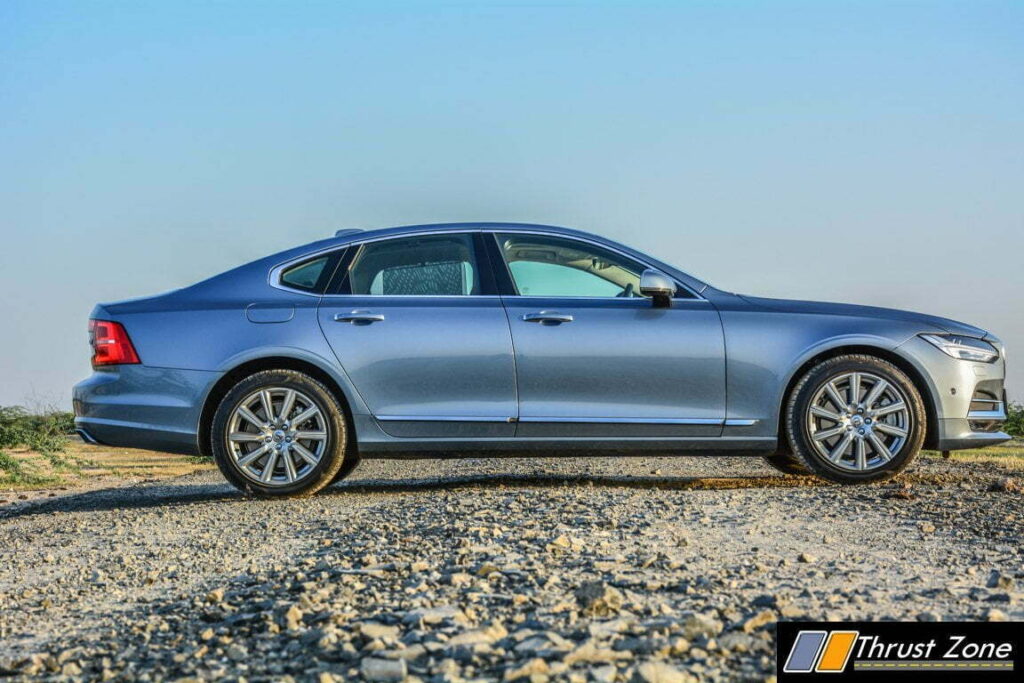 Design When it comes to design, there is a lot of similarities with the XC 90 spotted here. Identical head lamps which have the Thor’s Hammer, Mjolnir inspired LED lights which just woo you like nothing else in the segment from the front. Talk about beating the guys who started LED lights game at the front at their own game majestically! The grill at the front is also a prime example of how the front-end styling is important.

The massive grille with iconic and old badge of the Volvo makes it stand out. The sleek and detailed bumpers and overall front stance are very imposing indeed. Door mounted mirrors always makes it to a great design, they come here too. Come at the side profile and it looks as if the coupé profile has been extended, and its done really well too. 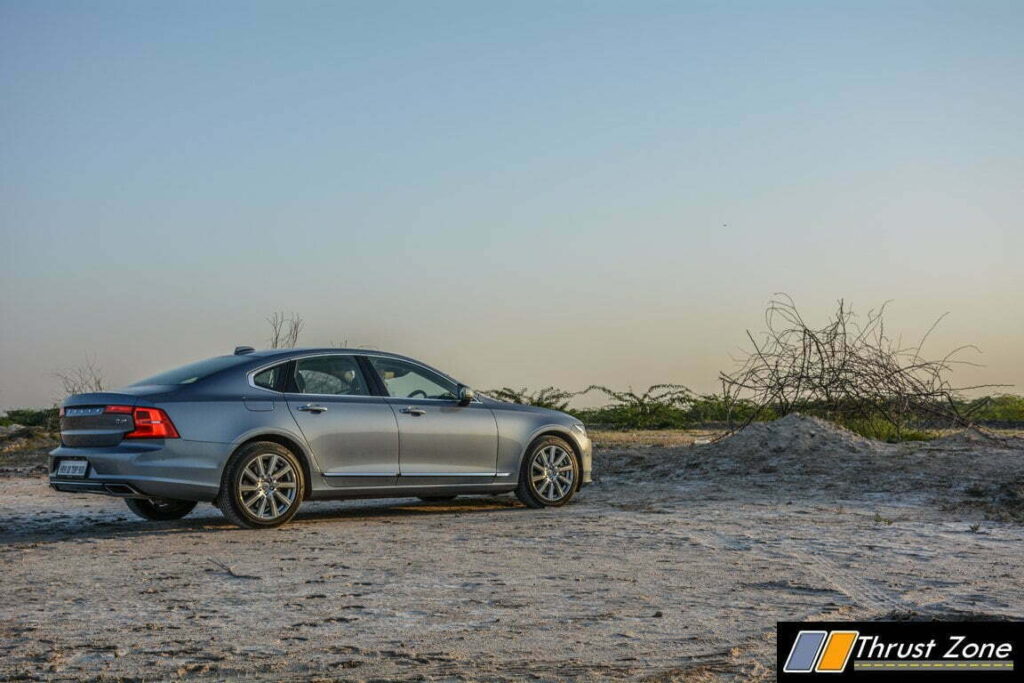 The swooping roof-line with the generous glass area and space in the car proves the point. The 18-inch profile dominates the side profile as well. Elegant, slightly dated looking alloy wheels do the job really well. Come to the rear and things turn odd a bit. The elegant front and oddly done rear gets mixed recations 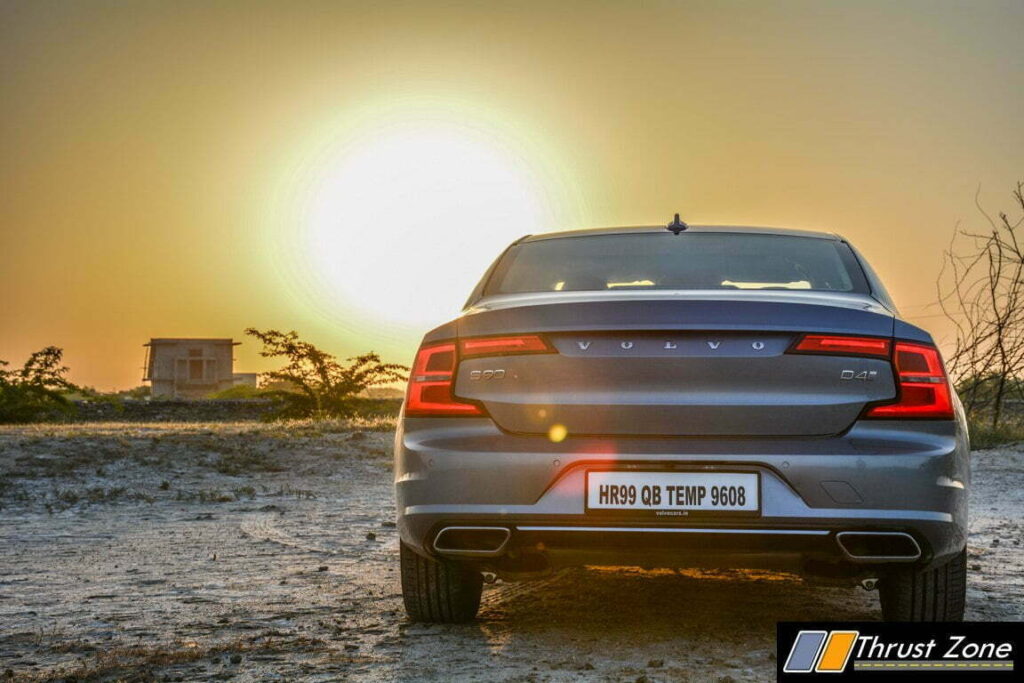 The rear is something completely different. The lines and the lights are very ‘American’ and hence it gathers attention and distinguishes itself from the competition. We think this is the reason the rear looks this way. Summing up the design then, Volvo has struck the cord right and masses should appreciate the work behind the styling. This is the right way to enter a segment where it never caught up much ground. 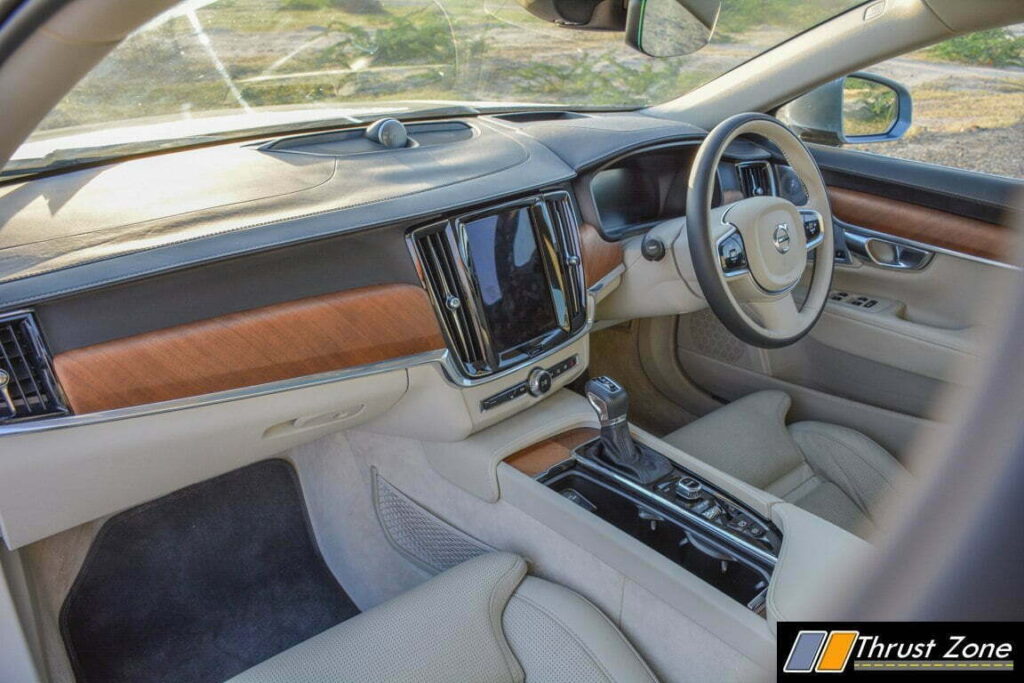 Interior is another place where the S90 simply makes you feel that this cabin is from a segment above. The dashboard is all leather , the seats are Nappa Leather and extremely well finished. The car overall quality along with fit-finish is top-notch indeed. The Volvo design of the interior is based on a single piece used everywhere as it gives the cabin a look of completion and not making it look busy. For example, there are only 8 buttons in the cabin to control infotainment and climate. The chrome strip runs from one end to the other. The large chunk of wood is walnut and can be seen in all four corners of the car. Piano finish around the large touch screen makes it look familiar to its target audience. 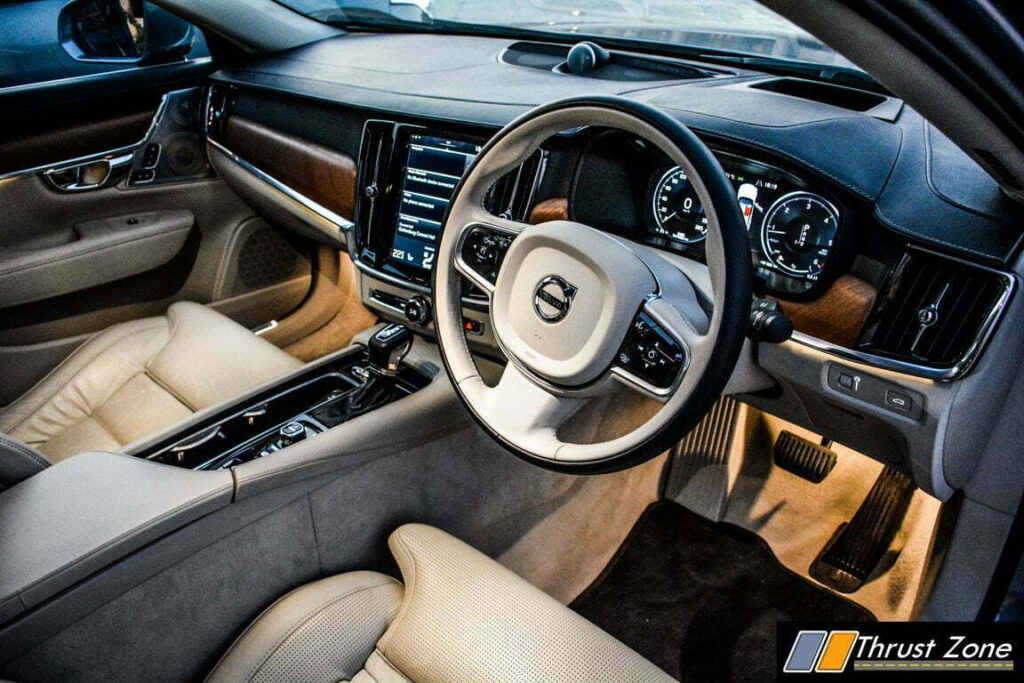 The infotainment system is quite easy if you get used to it. Before that, it can take time for users to get familiar with as it can be a little tricky, Everything is touch and there are three screens on offer. First screen offers all the options for connectivity along with the navigation system. Middle screen shows that what are you using, which will be mostly navigation, entertainment, climate control options that you will see minimized. Second screen also allows you to make changes to the seat which includes positioning along with heating and cooling seat feature has been as been standard. 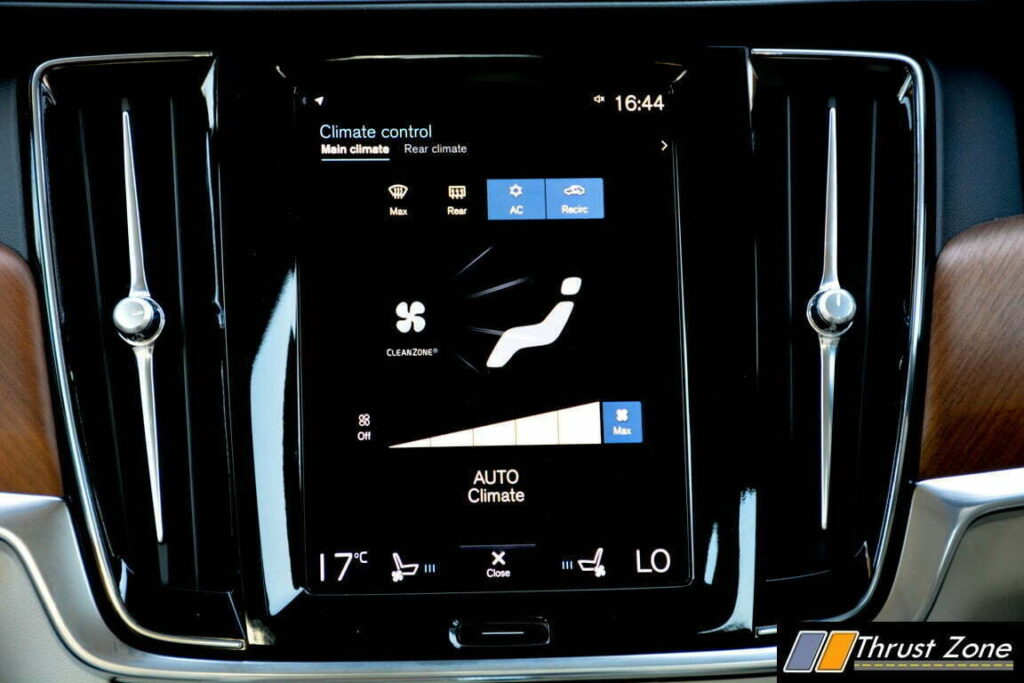 Third screen showcases all the features such HUD, Speed warning, ESC button, Park assist, Lane keeping assist and other options that can be switched on and off. Overall, once you get the hang of it, it is one of the best systems after the BMW iDrive system. Another round goes to the S90 and that is the sound system. 19 speakers Bowers and Wilkons system is off the charts with its quality. The concert hall function, which has been specially tuned, keeping a Gothenburg Auditorium in Sweden and Volvo says it matches to that. We will have to take the car to the place and test its credibility though. Jokes apart, we almost believe them. 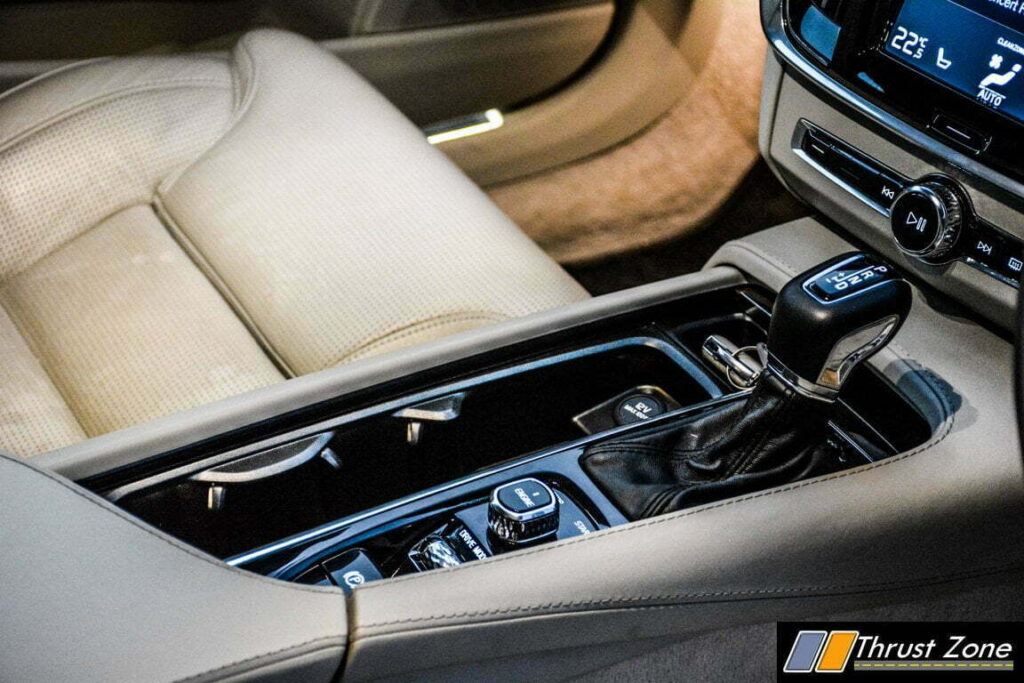 Since its a single variant with a single engine and gearbox, everything in the car is standard. Right from reversing camera to sunroof. Headlight controls have oddly moved to the stalks and the EURO switch for them has been taken away. You can see illumination scroller on the same place. What we did not like at times with the screen is it can be slow to react which includes the gear knob, which can show, reversing camera on the screen for 10 seconds or more after being in P mode. 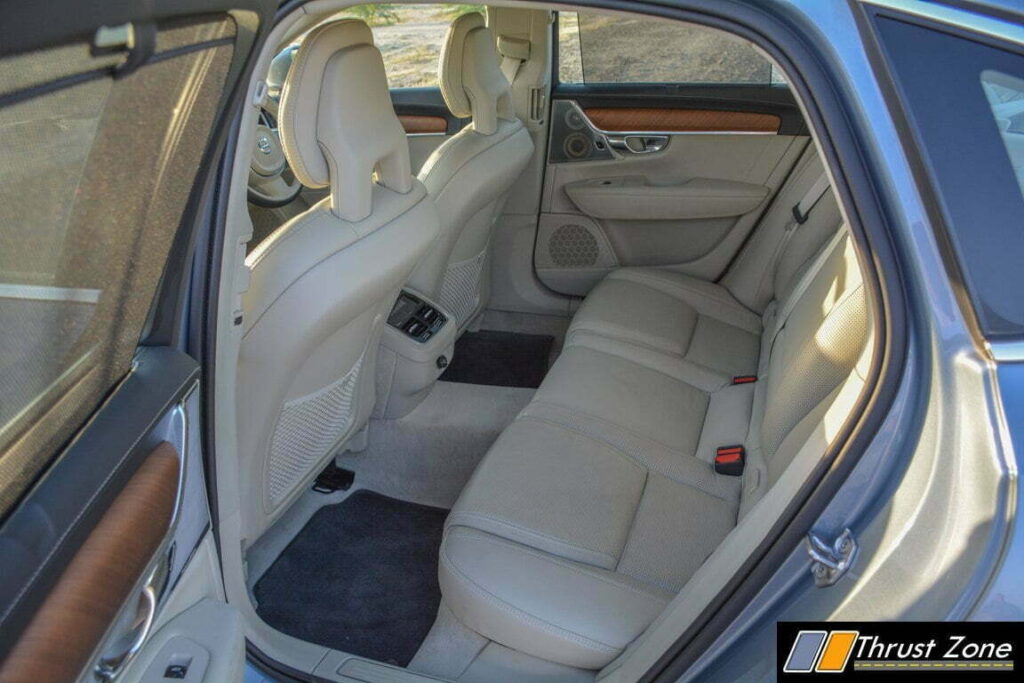 The seating position is good, but it isn’t as low as we would like it. Seat are made with the help of orthopedic surgeons to make sure you are comfortable like no other place ever before, even your home! Needless to say endless support in every way from these seats can be witnessed. Visibility all around is very and parking it in tight areas or maneuvering through tricky junctions, which our route had, was an easy task. Space in the front and rear is good too. A 6-foot driver in front of us, there was enough leg room to stretch out. Headroom is alright and shoulder room is good, but the car is best as a four seater not 5 as it has a large transmission tunnel. 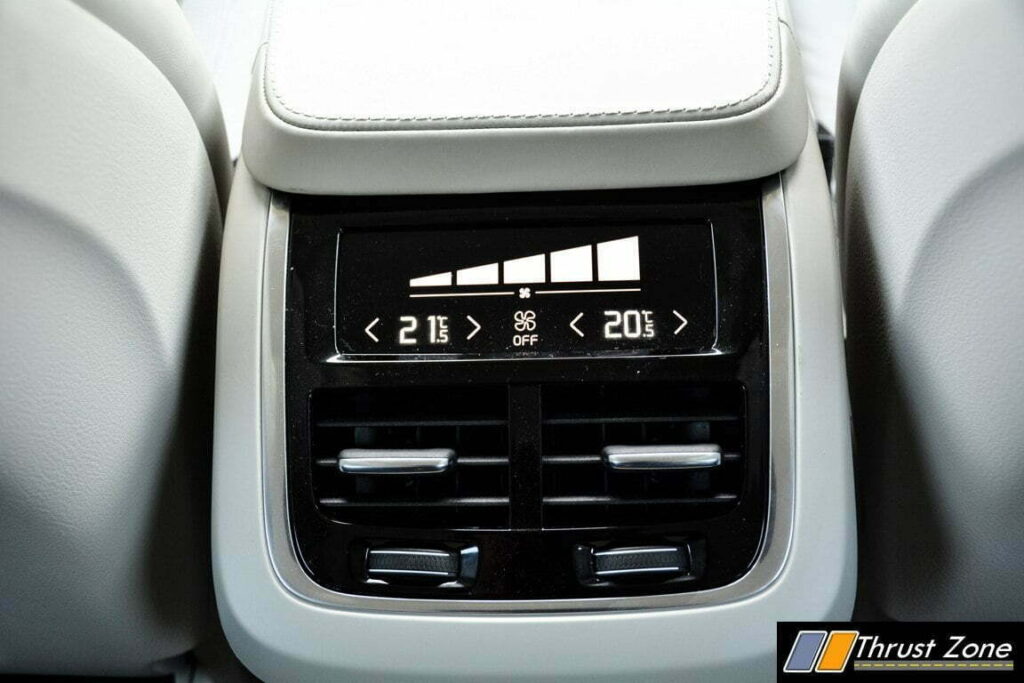 A/C control are touch units at the rear, which add to the ‘cool’ quotient. You can adjust the climate control along with the blower. Boot space, loading lip and practical opening means it can be used thoroughly and take the family luggage or can pick up people from the airport who don’t travel light. Neat touches such as Swedish flag on the seats, frame-less internal rear view mirror add to the ‘cool quotient’ 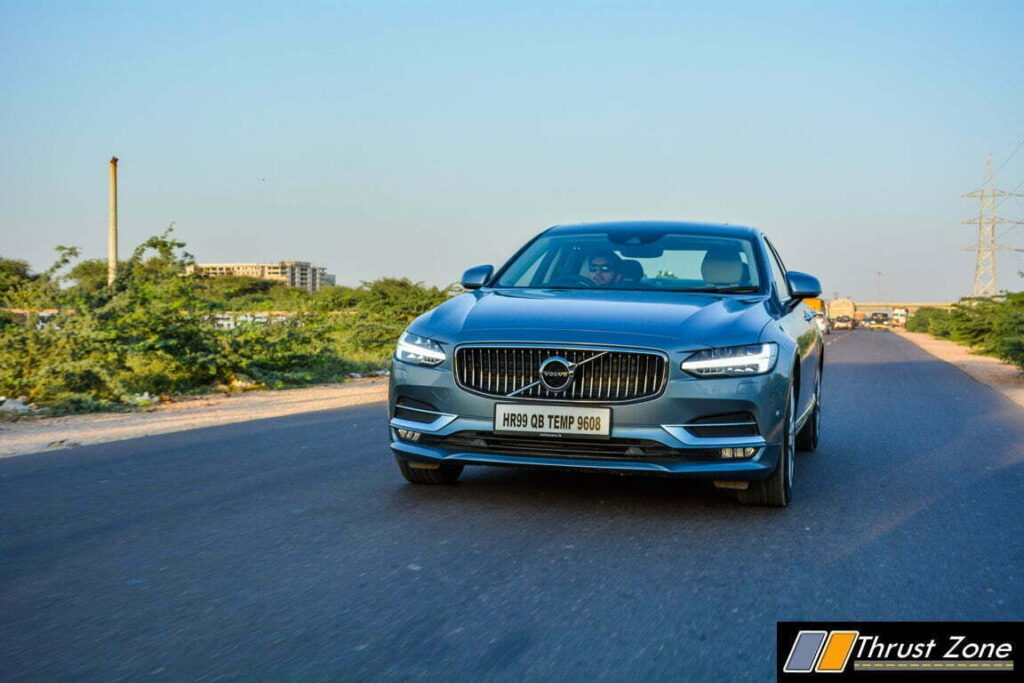 When it comes to engine and transmission, there aren’t fancy options here with the S90. Volvo says every customer wants the same, then waste time putting multiple variants. You get a sub two litre diesel engine mated to a 8-speed gearbox. The motor makes 190 PS and 400 Nm of torque. The engine is super smooth, refined and barely audible, only while accelerating though. Cruise with it and you won’t hear a murmur from it. Acceleration sound is very petrol like, as it is with new age diesel European engines. You have good low-end torque thanks to shorter gearing in first three gears, the post that it picks up pace and gathers higher triple digit speeds. 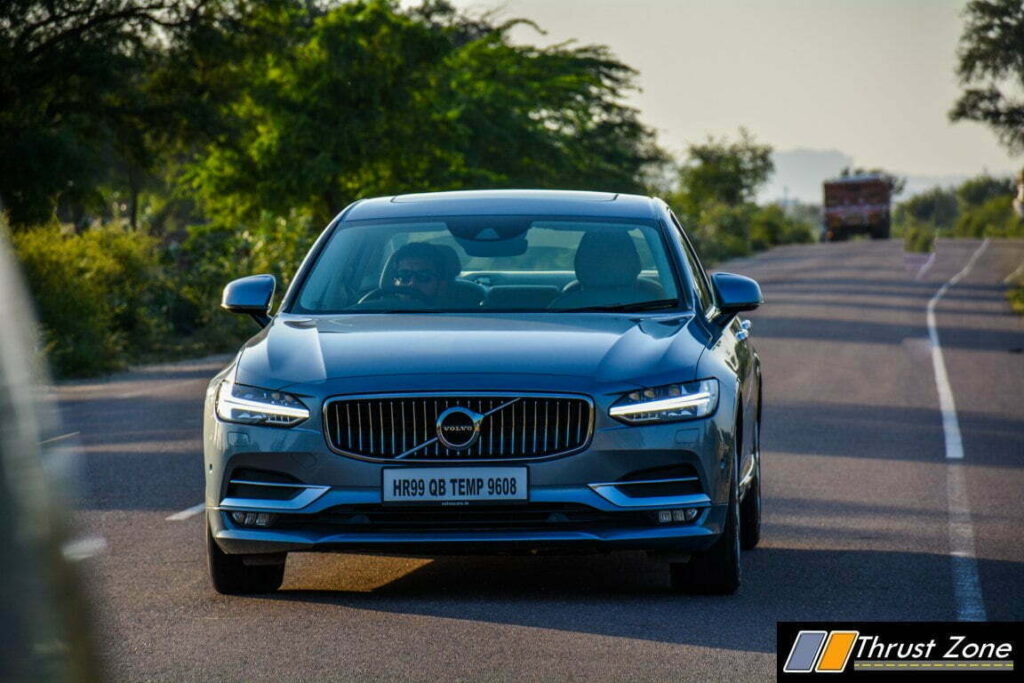 At any speed the engine is relaxed doesn’t feel stressed. While the engine is fine, the gearbox is struggling a bit. The gearbox can be late to respond when you mash your foot into the carpet. Surprisingly, this happens in sport mode too. However, once in sports mode, it does hold gear for longer as the redline shifts from 4000 RPM to 5000 RPM. BUT and it is a big one. Drive as if you’re not in a hurry and the gearbox doesn’t shift and continues with the same gear and accelerates even better than expected. 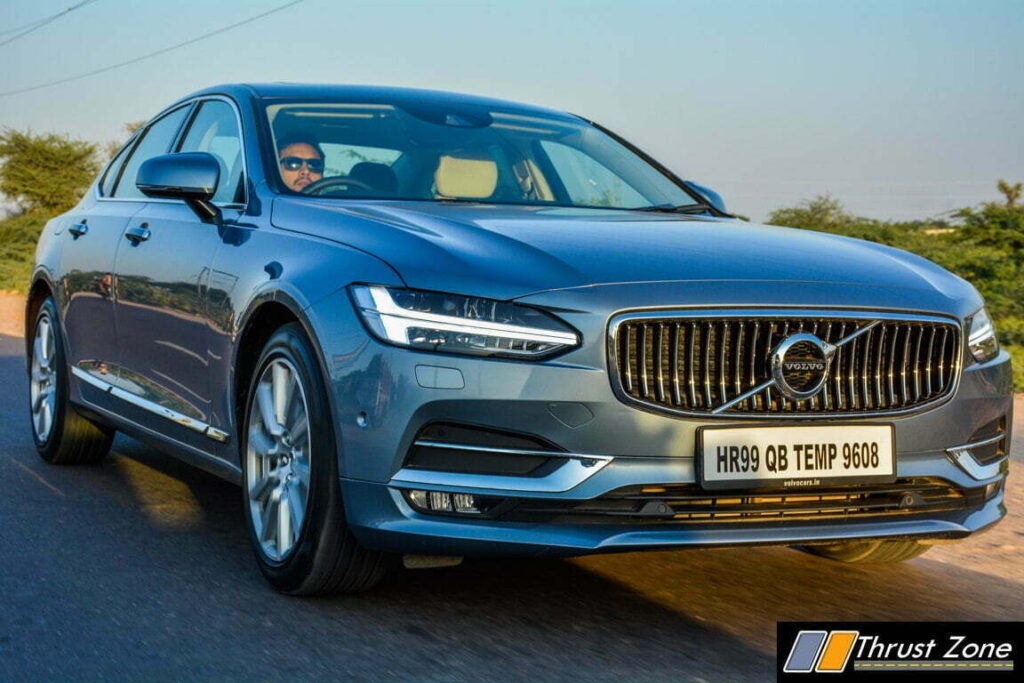 The overall idea with the transmission and engine is about creating a relaxed driving manner and you can benefit from it as an enthusiast, a chauffeur or even a normal driver. Performance hence, is satisfactory, as it does 0-100 km/hr under 8 seconds and mid range along with top-end power is on par segment standards when compared to other four-cylinder engines. 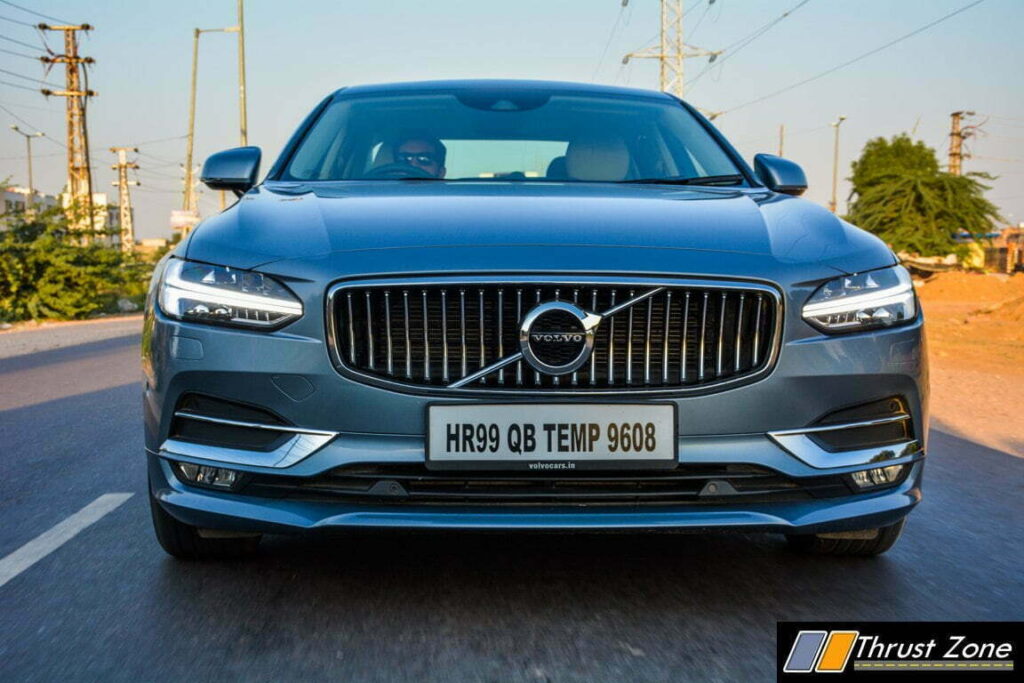 When it comes to the chassis, The S90 gave some serious surprises. First things first, the ride quality, it is downright brilliant. Rear passengers don’t feel a thing and far away from the broken roads that our country offers. Front suspension is traditional and despite that we did not feel any big pothole also transferring any thuds into the cabin. Something that is a rarity in this segment. Air suspension at the rear and conventional wishbone suspension do their job really well. We also think that tyres specially made for Volvo S90 by Pirelli help in this matter. 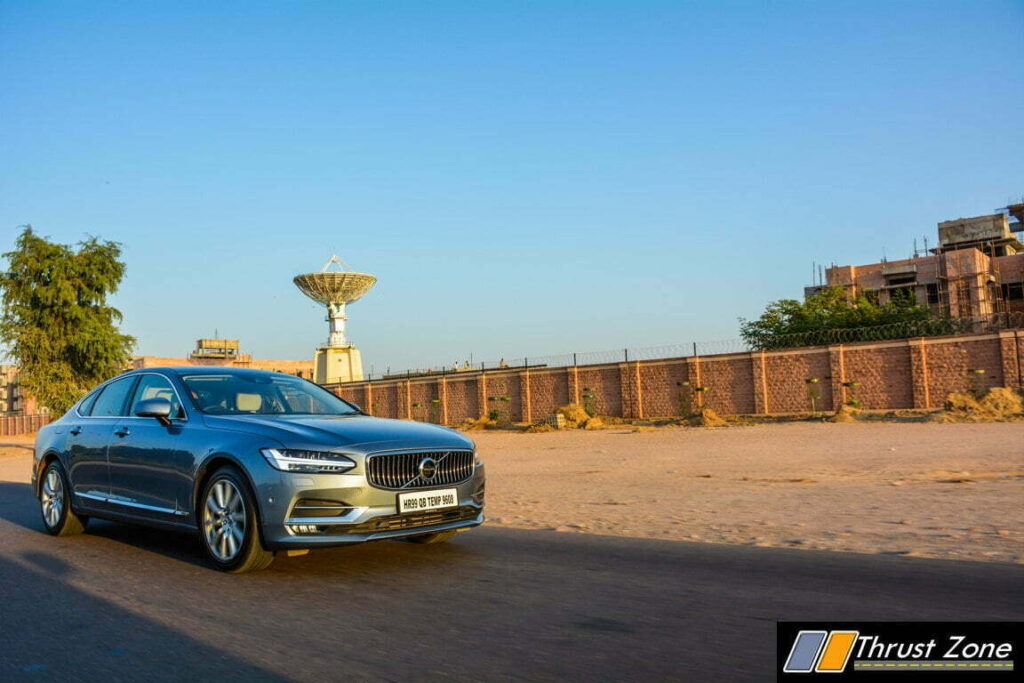 Bigger in width and despite a lower sidewall, tyres are worth the effort and mention. Handling on the other hand isn’t that razor edge like BMW for say. Front wheel drive layout along with a suspension/wheel package is tuned for comfort and pliant ride on any speed. Steering is artificial, feedback from the dead center is good, but it fails to load up properly and in a conventional manner even in sports mode. However, it continues to be precise and does whatever is asked for immediately.

All of this makes it easy to drive in cities and u-turn radius is short enough for this kind of vehicle. Grip is fantastic around sweeping bends thanks to the special made PZero Pirelli tyres. S90 also comes with very good brakes with progressive bite all the way from the top till the end. 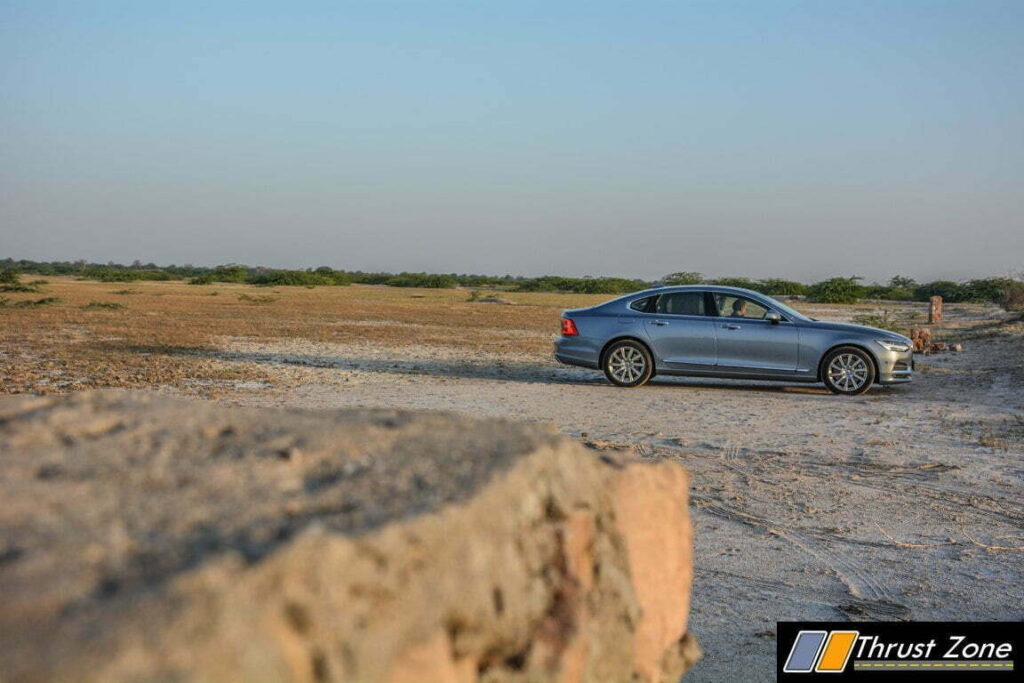 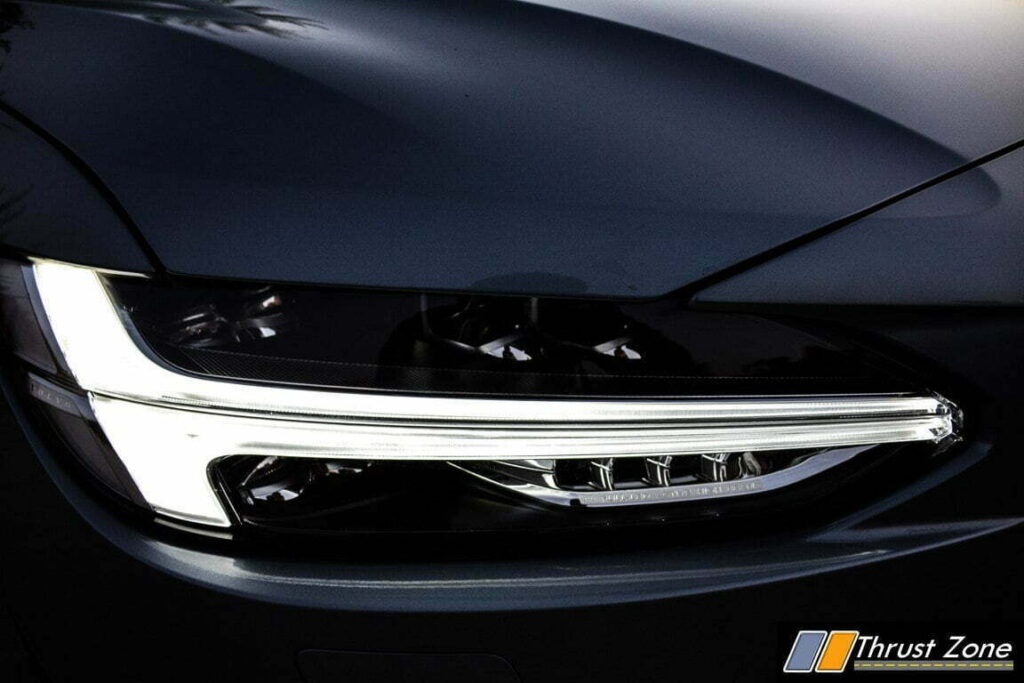 First! Don’t get a wrong impression of the car, it may not be the most sportiest of the lot, but it certainly has some key elements that woo customers and is segment first too in some areas. Right from the best in class interior, when it comes design. Plushness seems unmatched for now. The outer design is something to look forward too as it will grow even more on you. 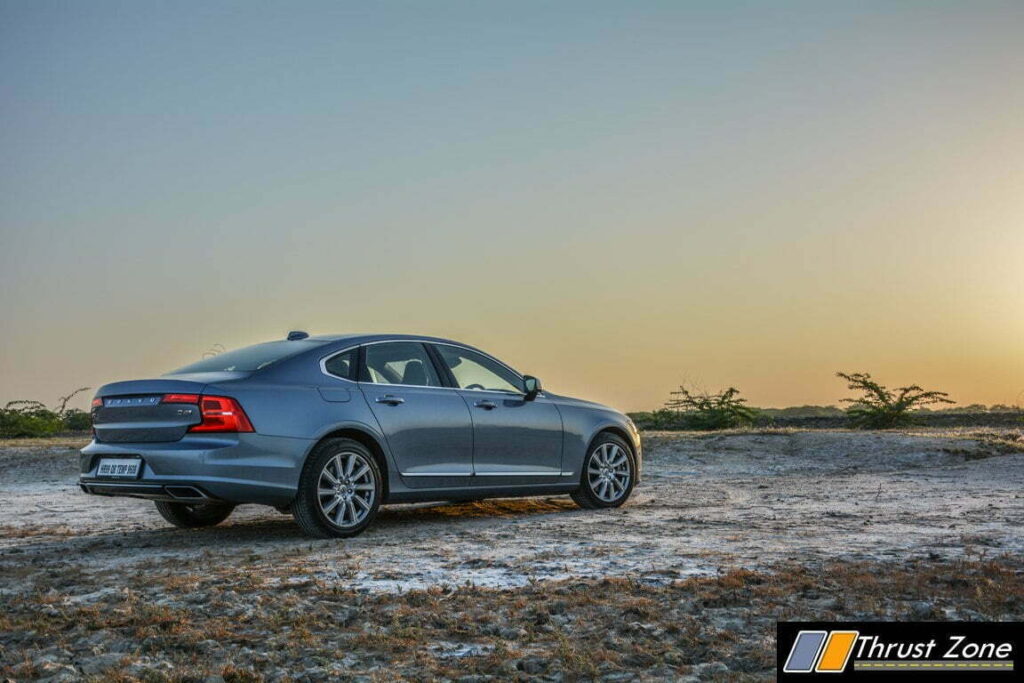 As always with Volvo, the exclusivity is unmatched and this time an all new modern approach towards the car is most likely to leave an impression. The same way it has made an impression on us. Pricing is set to take the S90 to new heights as Volvo promises it to be between Rs. 55-60 lakhs and that could be a steal considering it is undercutting the rivals and offers so much more in every single regard. Volvo may have another segment best car and winners on its hand. 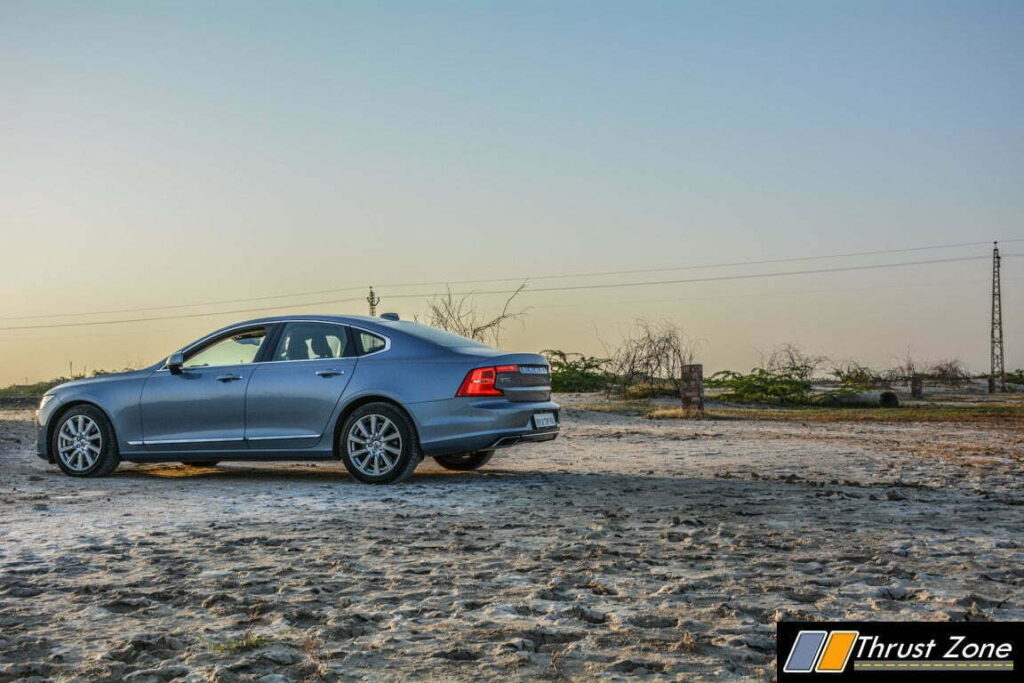