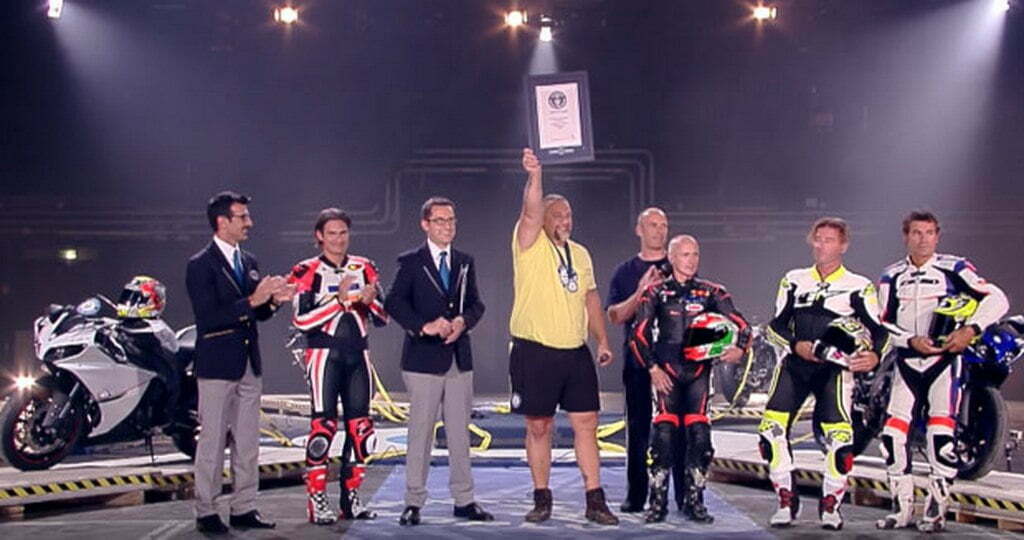 We are not a website which reports who is the strongest man in the world, but whenever anyone does anything with the automotive world, it becomes our job to let you know about. The man which is set to claim the strongest man in the world very soon is on a roll to show what he can do. This time he chose a almost death defying task with set of superbikes to show of his strength, or does he. Nick named as the Austrian Rock, the man challenged that he could do withstand the pull of four motorcycles pulling his arms and legs in all four direction and he would endure and won’t let the superbikes go ahead for around 10 seconds.

Top level riders were called and the Superbikes used for the job are last generation Yamaha YZF R1 for the job. As we know the motorcycle is the most famous and powerful Japanese motorcycle of the last decade. The cross-plane crankshaft equipped motorcycle was used to do so. The riders include Italian road racer Fabrizio Pirovano, European Superstock champion Lorenzo Alfonsi, along with former Grand Prix motorcycle road racers Alessandro Gramigni and Paolo Casoli.

Franz Muellner from Austria said he could endure this for more than 10 seconds. Turns out, when the motorcycle started their job he crossed that boundary of 10 seconds easily and he ended up enduring all the thrust and a arm and leg pulling feat (literally) for 24 BIG seconds.

This is not the first time he has done anything that has a motor which has lot of thrust in it. Previously Guinness World Records title for the Heaviest weight supported on the shoulders is with him as He supported an average of 560 kg on his shoulders for 30 seconds while a helicopter landed on a frame which he was partly lifting.

The motorcycles of today in the litre class world make more power and crucially more torque today (European atleast) that is required for the task. Something which could help him a chance to break the record once again if he wishes to. Have a look at the video to be amazed!