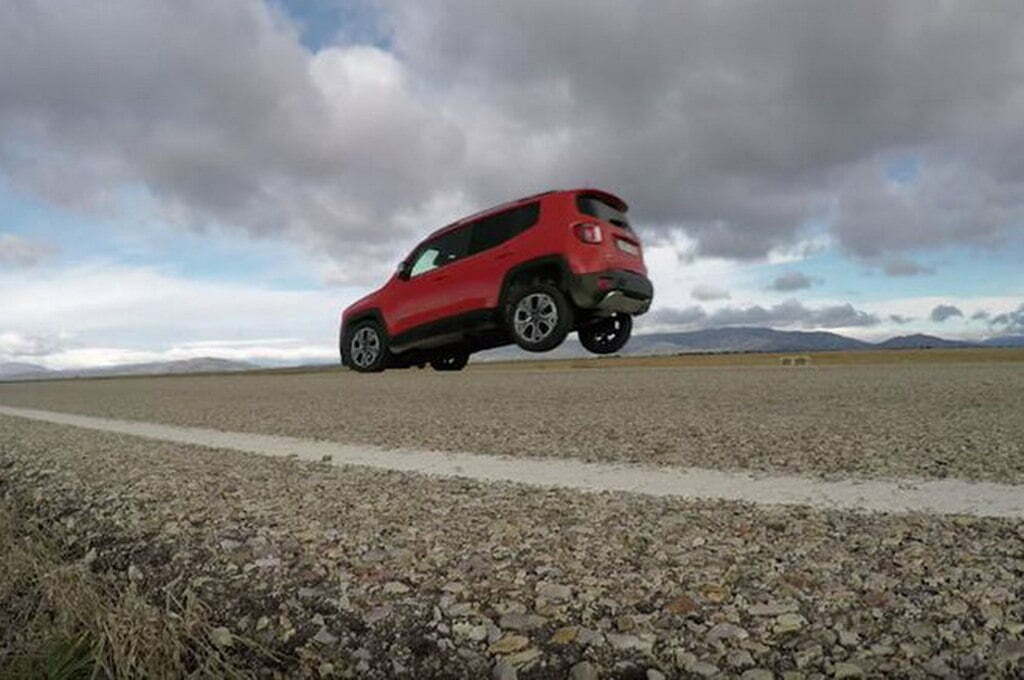 It is tough to explain what we feel about this video to be true. On one hand it has made us crack some fun car guys Vs bike guys joke and although it has left us a bit baffled. If you are wondering what we are saying then let us tell you that the Spanish automotive outlet that goes by the name KM77.com tested the Jeep Renegade. Among the other usual tests conducted for the review, the journalist responsible for the review, Pablo David Gonzalez was surprised to see that the 1.6 ton car did a stoppie when he applied brakes at 135kmph. And it all got caught on a camera too.

Now, had it been a motorcycle, we would have grinned stupidly on it, but when a car does that, it is time to sit up, take notice and ask a very significant question, WHY and HOW did that happen? The car in question was the front wheel drive version of the cute little Jeep Renegade with a 1.6litre engine. Obviously, the degree of shock for Pablo was a way more than us, it cannot be a good feeling if the car that you are reviewing does a stoppie, it is absolutely scary and very very dangerous.

Saying that, we can shocked how an established company such as Jeep can let such a glaring malfunction go into a car that is on sale as we speak. Moreover, when Pablo contacted Fiat’s Spain communications director with the tape, he was told that the car Pablo reviewed was a pre-production model (which it wasn’t) and the same vehicle had also suffered an accident that has caused the car’s ABS system to malfunction. That said, even if the company’s claim was true, then how did they let an automotive journalist drive a car that has suffered and accident without thoroughly rectifying the issues that might have been in the car. We understand that automakers have a general love-hate relationship with us automotive journalists, but still, last time we checked, we too have rights to live!

Had the car been in a serious accident due to this failure of which there were incredible chances, Pablo and his crews lives could have been in danger. Imagine if he were driving the car out in the city roads and not like an empty controlled space in the video. It could have been a disaster. If that wasn’t an ordeal big enough, Mr. Gonzales took another Jeep Renegade for testing after wards, this time an AWD 2.0 MultiJet powered variant. And lo-and-behold it also did stoppie just like the earlier car, however, this time around it wasn’t that big but still as un-safe as the previous one.

Still the nice guy Pablo did not publish his review since he was informed that the car in question was a pre-production model, however, the failing, on the company’s part came into light when Pablo found out that the same car was eventually sold in 2016 as a car in perfect condition “with no faults whatsoever”. However, Mr. Gonzales, managed to contact the particular owner of the concerned car and explained about the car’s history.

This makes us think how a whole team at Jeep can be so unprofessional and insensitive to let something of such stature let go this easily. Especially in this day and age of social media, it is rather shocking how incompetent Jeep was in handling such a clearly life-threatening issue with the car. With Jeep only beginning its innings in India, such an incident has made us rather sad about the way the company takes safety as granted. Watch the video below and do not forget to comment your views.

This was the first time Jeep failed at something similar. Today, a new Jeep posses ‘similar’ problems.