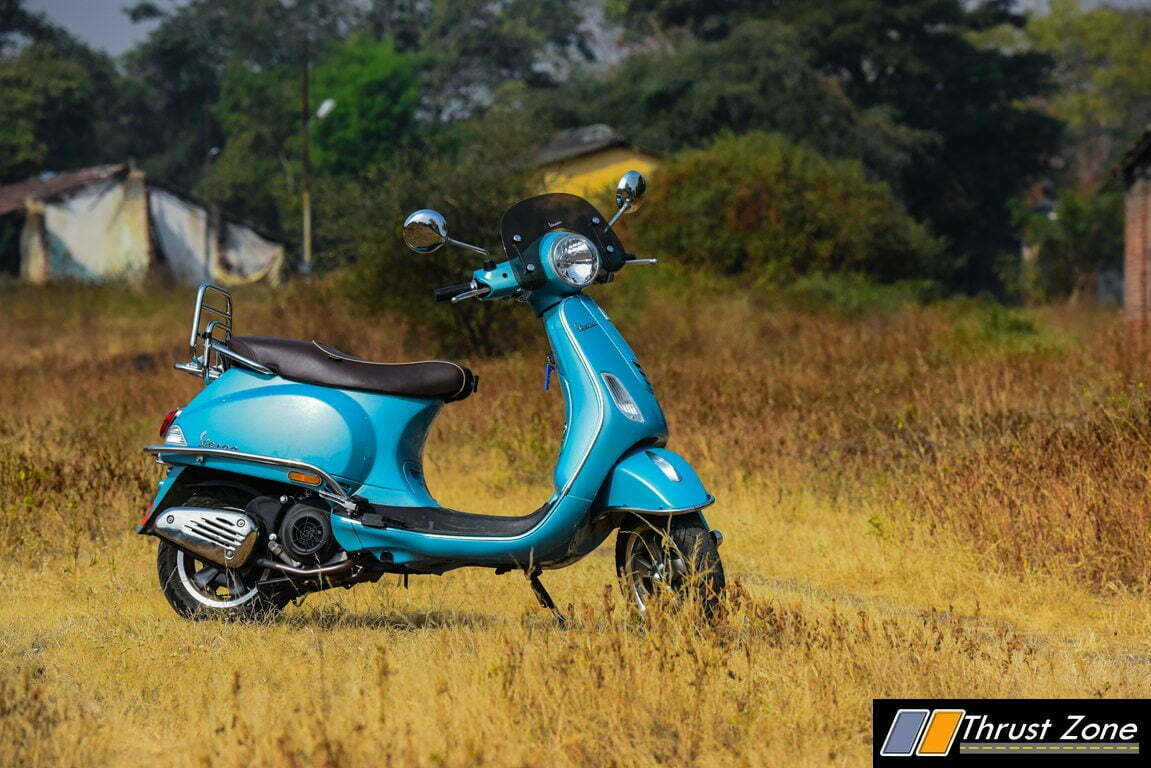 Piaggio is gaining traction in the Indian market like never before. The sub brands are evolving continuously as the parent company continues to introduce vehicles one after the other. Right from bringing in the race bred Aprilia superbikes and street-fighter to Italian cruisers that elude styling and feel like no other. What Piaggio has been doing for quite some time and seems to be getting on target despite a more unique approach to its plans for India is getting the Vespa scooter into the market in one way or the other. 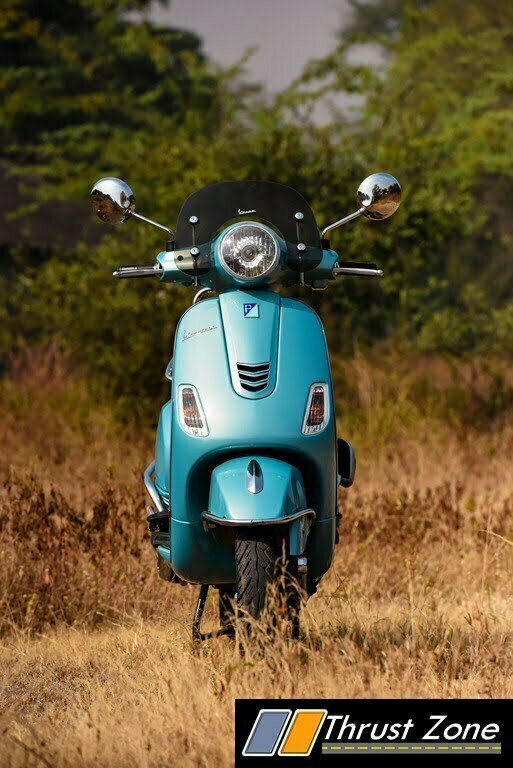 It started with a 125cc engine and then came many variants, such as disc brakes variants, more well equipped, differently styled and many other attempts. After doing all of this, Vespa has finished 70 years in May 2016 and it is celebrating it in India by offering this even more exclusive, high quality, well specked and offers a lot for your money. We have reviewed the scooter that it is based on so we will keep it short and crisp and you can read our detailed review here.

Piaggio has been calling this scooter worldwide as ‘Vespa Settantesimo’. This in Italian means Vespa Seventieth. The design continues to be the same but what we get is 70’th Anniversary badges on the side panel and on the glove compartment. The also scooter also gets a large front visor, a fully chrome rear carrier, chrome guard all around along with a Anniversary edition helmet that fits in the storage area, which is an half face unit. 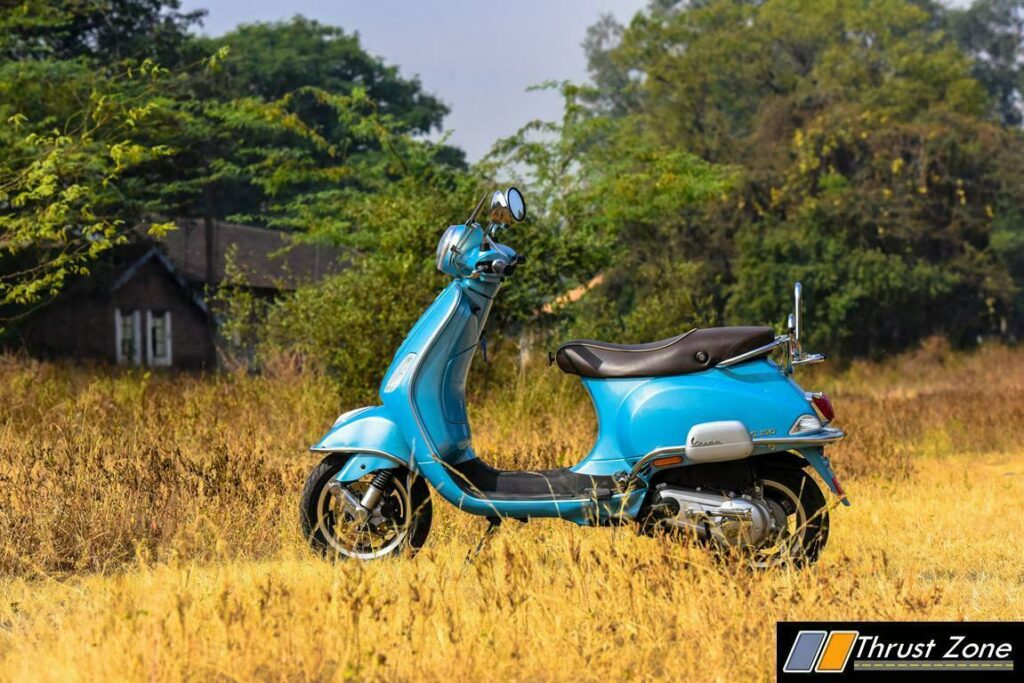 The seat is now in brown color and more chrome can be seen on the mirrors. The Azzuro 70 color which is the light silver blue used which is also done internationally is seen here and looks really good. What we get also are glossy dust-grey wheels, which add more panache to the cool quotient that the scooter already has. The scooter continues to get the digital speedometer which has all the features and tell-tale light that it already had with the normal version. 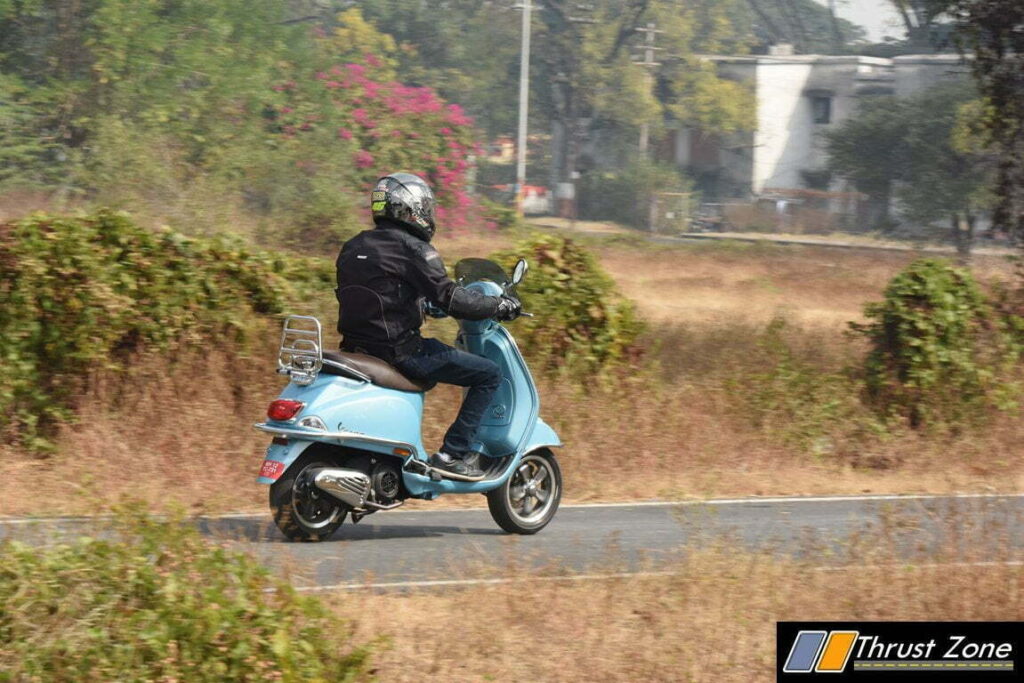 However, what we don’t get that the international models do get, is the a leather bag (that the Vespa 946 has) and the Grigio 70 color as an option. Both these surely raise the prices of the scooter by a bigger margin than the currently priced Anniversary Edition and it is most likely the reason they were not offered. As the current scooter does not misses out on the main ingredients that the international model has, we think this is just right for our market. 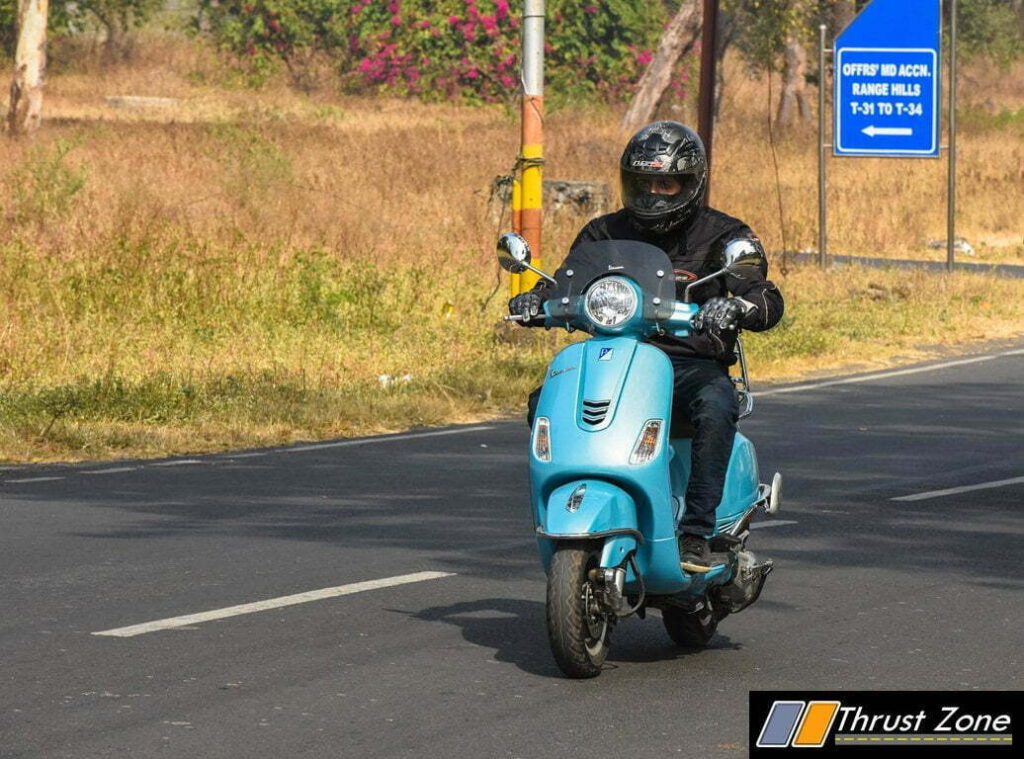 Mechanically, as we know the scooter gets the 150cc 3-valve motor, which is air-cooled and makes 11.6 PS of power and 11.3 Nm of torque. The engine is pretty smooth and refined, but the CVT tuning could have been better and more focused towards providing a better power band. There is good amount of top-end power which takes the scooter to a top speed of speedo indicated 120 km/hr. City driveability is good enough as there is enough thrust to propel this scooter which also weighs quite less thanks to the monocoque chassis. 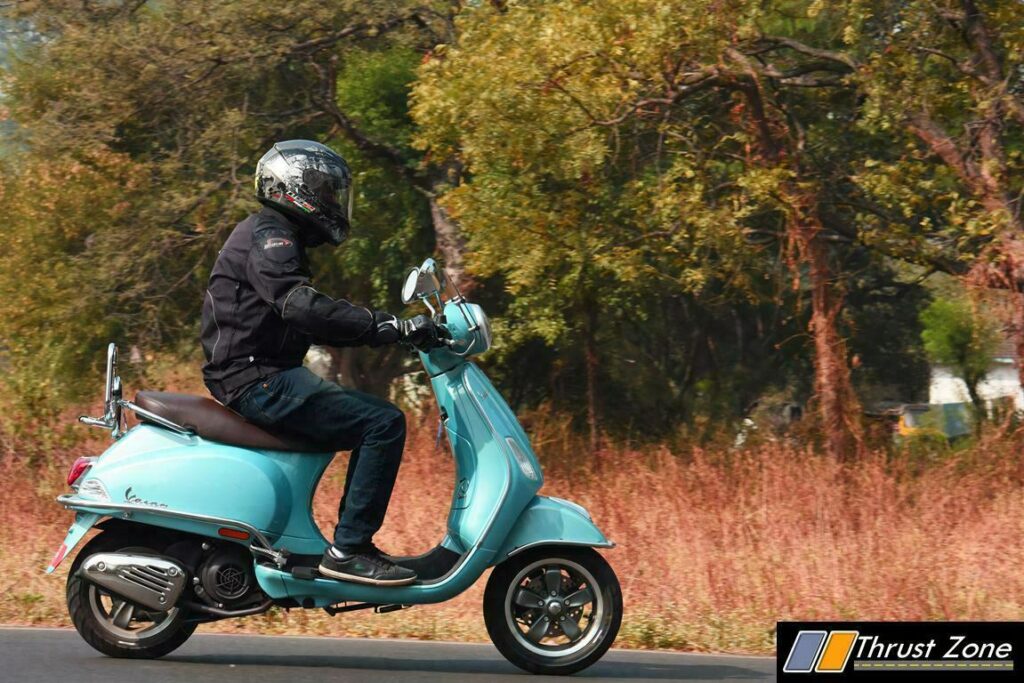 Brakes are disc at the front and rear are drum which do a great job of stopping. Handling is good enough, highway speed stability, that is post 100 km/hr makes the scooter’s front-end jumpy and wallows around, which depends from on rider weight and pillion on-board. In the case there isn’t much to complain then. All of this also means it is nimble in the city and ride quality is fantastic makes it an ideal scooter for city streets as it is comfortable and gets you all the attraction you need. Something that the scooter already had, but the Anniversary edition takes it ’70’ notches up. 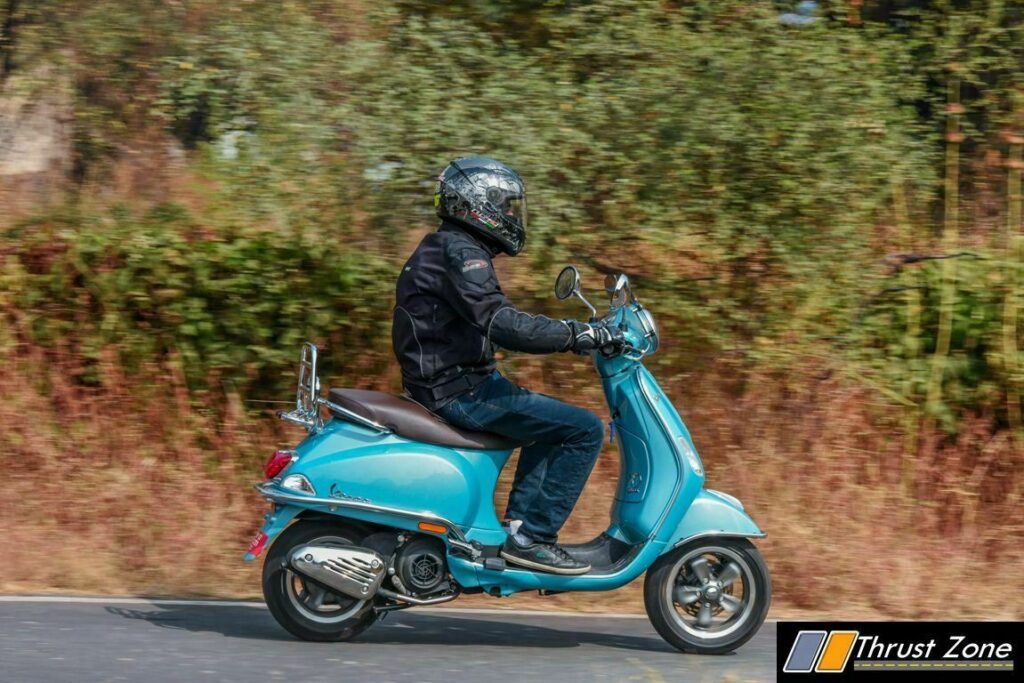 Summing it up then, the scooter continues to offer stellar performance on the road and is ideal for our city streets at the same time. There is no more asking Vespa for a more performance oriented scooter as we got the Aprilia SR 150. The Vespa then make its self more clear that if you want a more comfortable, overly stylish scooter and you have no problem paying for it, it is better to get the Vespa 150 and now, with the Anniversary edition, it makes the case even more special then before. 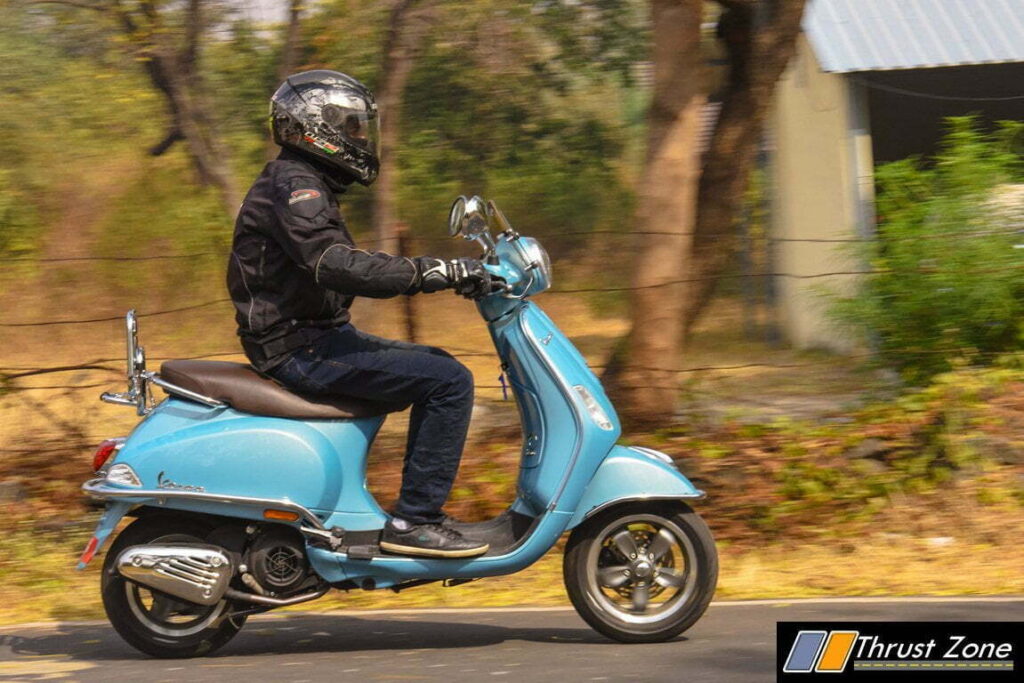