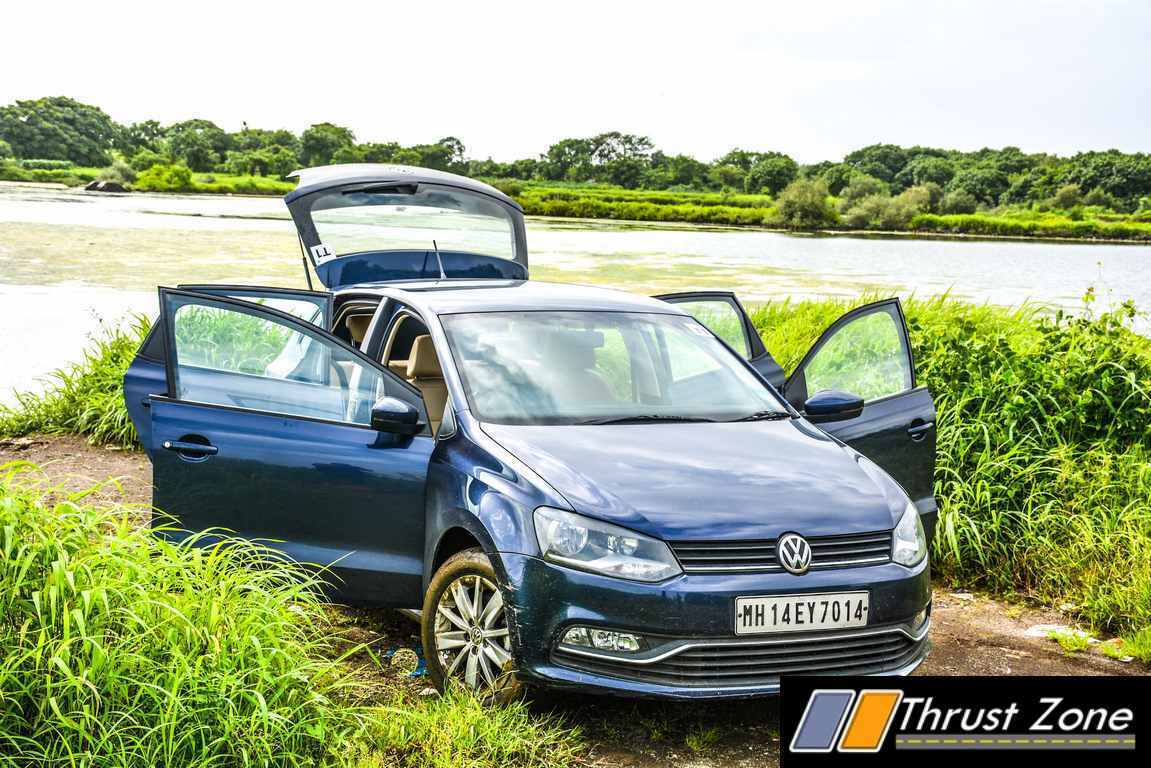 The Polo is a car which basically doesn’t need any introduction. However, allow us to give you one because it has gone under major and minor changes over the past half a decade. Volkswagen launched the Polo in the year 2009. Post 2012 it realized despite hardcore advertisement which still happens, the Polo did not pick up pace as expected. Lack of brand awareness along with high cost of maintenance wooed away customers in the market as they look for exactly the opposite. However, the pricing was right and the brand did pick up some pace and still has the same speed, but it is still low. A manufacturer which rules Europe does not more 5000 units a month in India is something not easy to gulp down.

Polo got major and minor facelifts every year since 2013. This is when the GT Tdi with the 1.6 diesel came and blew the socks of other cars and gained fame among critics. Headlight and tail lamp changes, minor interior changes and most importantly, addition and subtraction of engines. What we have today with us is the 1.5 diesel unit. Downsized unit from the Vento and now makes more power than the regular Polo diesel. We take a quick spin in the car to tell you is it a sport or not. 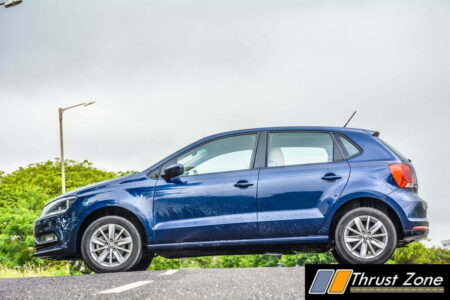 Styling Design is where the Polo impress aam junta. ‘Classy, sophisticated, mature’ and much more words are used to describe the car. One of the few low slung cars in the segment, which still grabs attention. All of this has happened due to VW adding glamour to the package ever year since launch. Front now has more chrome in the grille and the bumper as it gains slats like its elder sibling. Design of the headlamps and tail lamps stay the same, but the way they illuminate and show their design from the inside has changed.

Side profile is of a big car and it just feels the length has been chopped off beautifully. Glass area and metal area are well in sync and is one of the key reason it makes fans very quickly. The VW Logo at the rear is a boot opener button, yet again was a first with VW back in the time. Overall, a great car with good colors and shiny paint job woo customers. However, we think it is time for a change and we can expect that soon as well. For now, thumbs up indeed! 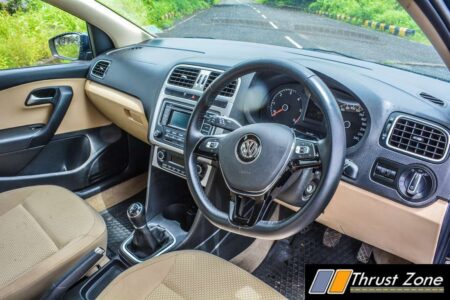 Interiors If the exteriors aren’t enough to impress you, it is the interior where VW scores even more marks than before. The interior is high on quality, plastics are best in segment, fit-finish is top-notch and build quality inside out is downright brilliant. The flat-bottom steering from Audi is clearly a wow factor here. The cabin now has more of brushed aluminum, which we think doesn’t quite match to the black and beige interior but the overall cabin still is dressed to impress.

Center console isn’t touch screen yet, but the buttons do a good job of navigation of what you need through the knob on the right side. Connectivity options such as Bluetooth, AUX and USB work well and Bluetooth connects quickly too. You have rear parking sensors as standard on the top-end variant. Steering mounted controls help you navigate through the menu in the instrument cluster and give you audio and telephonic controls at your disposal. You have all the tell-tale lights, such as trip meter, service reminder and the usual warning lights. 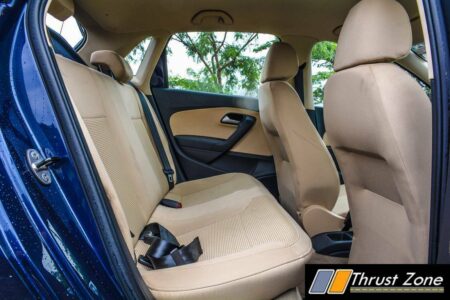 The Polo also has electric ORVM’s and a central locking button. The euro headlamp switch, the grab handle on the doors for passengers and the cool looking door handles on the inside is clearly segment best. The steering is adjustable for reach and rake, kudos to VW for providing it. A feature rarely seen comes here thanks to VW’s Racing legacy. The A/C is a chiller and there is automatic climate control too. Space is where the Polo doesn’t score high. Legroom is just about adequate at the front and rear.

However, the seats are good and supportive at both places. The visibility for driver and passenger is top-notch all around. The lack of legroom has resulted in something and that is the boot space. At 280 litres, Polo has one of the biggest boot and is fairly accommodating and opening is wide and large. Overall, Polo has its pros and cons, but the pro’s are still enough to woo customers. 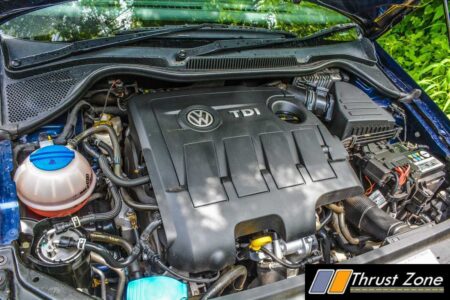 Engine and Gearbox Powering the new Polo is the new 1.5 diesel engine. Previously the Polo has been seen with 1.2 3-cylinder diesel engine that made 75 PS and 190 Nm of torque. We also saw the 1.6 GT TDi as well. This time the new 1.5 diesel engine makes 90 PS of power and 230 Nm of torque. The GT tune makes 105 PS and 250 Nm The engine NVH levels are better than before, the engine surprisingly isn’t free revving, but it feels more punchy when compared to the 1.6 diesel motor from the Vento. There are minor vibrations that can be felt at the clutch pedal.

There is turbo lag under 2000 RPM, around 1800 boost commences and post that onward a healthy surge of thrust can be witnessed. Below 2000 RPM there is still grunt to amble around in traffic thanks to flexible fueling and well spaced gear ratios. Power is adequate, low-end torque is just about adequate, mid-range is very punchy and thanks to the turbo lag. There is a lot of top-end power and you can easily see 170 km/hr on long straights. 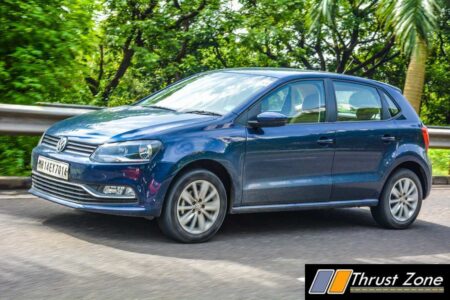 We got an stunning efficiency of 14.6 km/l in the city and slightly low at highway which stands at 18.9 km/l. Both numbers are 1 or 2 km/l more and less than its competition respectively. Clutch is light and gearbox is smooth with short throws. However, we think the gear knob always feels heavy to use, a typical VW trait. Overall, the 1.5 diesel engine is a welcome addition and is surely helping Volkswagen clock some numbers as it pretty good engine when it comes practicality and proven too by a large extent now.

Ride and Handling Dynamically, the Polo shines. The car is the most darty in its segment with good feedback from the steering at dead center. Overall weight of the steering continues to remain light though. The chassis balance is good, the grip levels are phenomenal. Despite you can reach the limits easily, there is always a lot of grip. This is when we realized that the Polo has wheels mounted quite outward than other cars in the segment which gives it a planted feel. 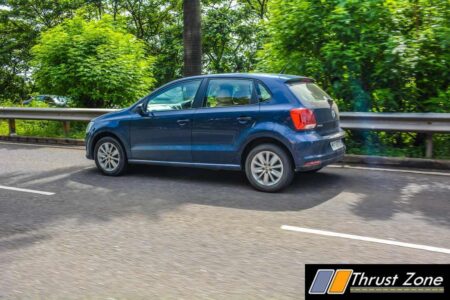 The car does feel agile and light when you attack the twisties and poised at the same time. Hence, highway stability, as expected is really good. A big car feel at the back of steering is the reason Polo impress with ride and handling characteristics. Ride quality is planted at all speeds and its the big bumps, which send a thud into the cabin.

Brakes are superb and yet again segment best with superior feel from the pedal. Extra ordinary stopping power from its brake, something its Japanese rivals could certainly learn from. Overall, one of three strong points Polo continues to impress its potential and existing customers till date. 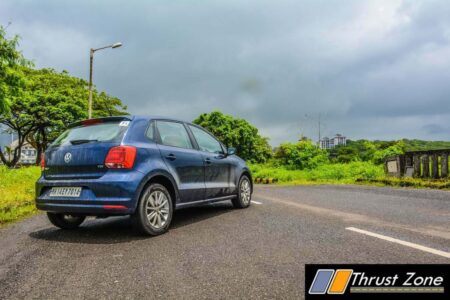 We said it in the beginning that the Polo continues to shine in area where it is strong and majority of downsides have managed to disappear over time which is the sales and service network. Volkswagen has increased dealership count, the brand is now also offering one a kind warranty for its customers, road side assistance and many more packages which include better service, parts availability and much more. 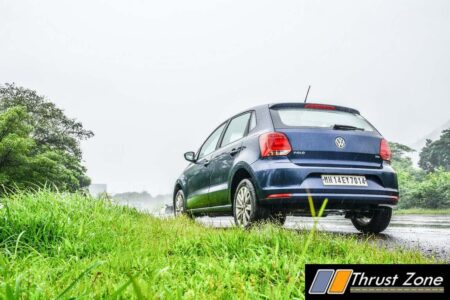 Polo continues to be weak in area, which hatchback buyers look out for, back seat space. This is something, which it lacks despite it makes up for it with boot space. New age competition matches on both and this where the new Polo expected from 2017 should full fill. For now, Polo 1.5 diesel offers great NVH than the engines in the past, superior performance, good fuel efficiency and great quality inside out. All of these qualities don’t add up in a single place together and this is the reason the Polo has a niche in a volume segment. The numbers show the same and hence the Polo remains one of the top picks in the segment and modern-day enthusiast’s default choice. 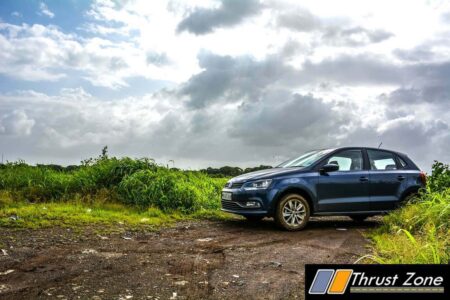