The prestigious ICOTY or the Indian Car of The Year award has been declared and the Hyundai’s dominance in last three on the award has been finally broken. The winner of the award for 2017 is the Maruti Vitara Brezza and it has won the title by beating a number of very significant cars that arrived in the country this year.

Winning this year would have been a special experience for Maruti for two major reasons, first it has finally managed to trump Hyundai, it closest competitor after a long while. Secondly, the Vitara Brezza is the first car developed by the Indian R&D team and thus, ICOTY 2017 stamps a big appreciation to their effort.

The declaration of the final results happed last night on December 20th, 2016 at a rather fascinating and grand ceremony in Mumbai. The trophy was presented by Dr. Raghupati Singhania, Chairman & Managing Director, JK Tyre & Industries Limited on behalf of the ICOTY to the team of Maruti Suzuki. Bob Rupani, the Chairman of the ICOTY Jury, presented a certificate signed by all ‘Jury Members’ to the winners of ICOTY 2017. 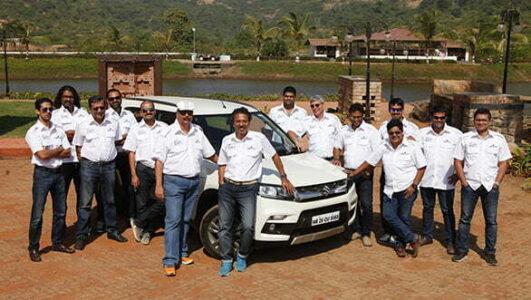 The contest was between 13 of the shortlisted car among the 19 launches this year. The final top six contenders were the Ford Endeavour; Hyundai Tuscon; Hyundai Elantra; Maruti Suzuki Vitara Brezza; Toyota Innova Crysta and Skoda Superb. The sheer number of SUV’s in the list clearly showcases the love for these machines in the Indian market. The competition was tough and tense where the Vitara Brezza finally won over the runner up Hyundai Tuscon and the third place finisher, Toyota Innova Crysta.

ICOTY has been in existence since 2006 and judges the nominated cars on a number of parameters like price, fuel efficiency, styling, comfort, safety, features, performance, practicality, technical innovation, value for money and above all suitability for Indian consumers and driving conditions.