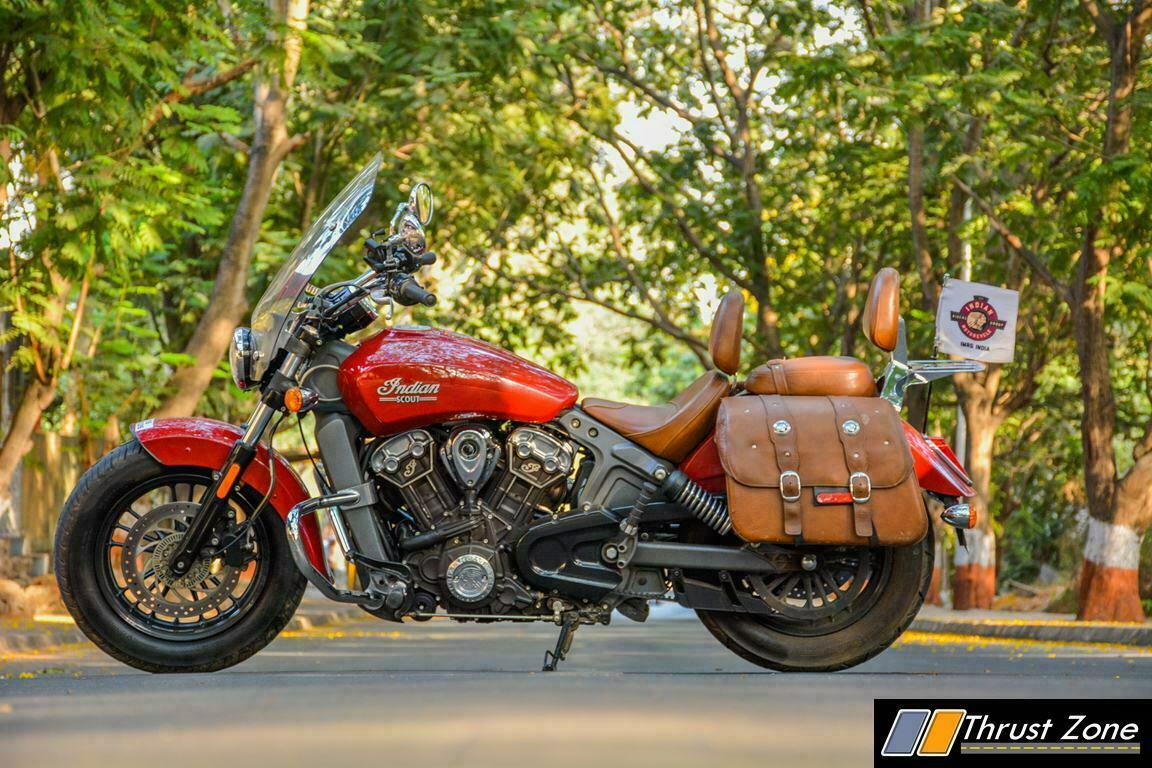 2017 Indian Scout is far more superior than its rival when it come to quality, engine and is the ideal bike which earns the word ‘sweet cruiser’

SUV and cruisers have become the new lifestyle products in the market today. You can see both types of vehicles roaring out in the wild nowadays, in all their dominant glory. While four wheels isn’t a topic for right now, cruisers surly are. Interestingly, for most people in the country, generally only a one brand comes to mind when you think of premium cruisers, however, threat is far from truth. 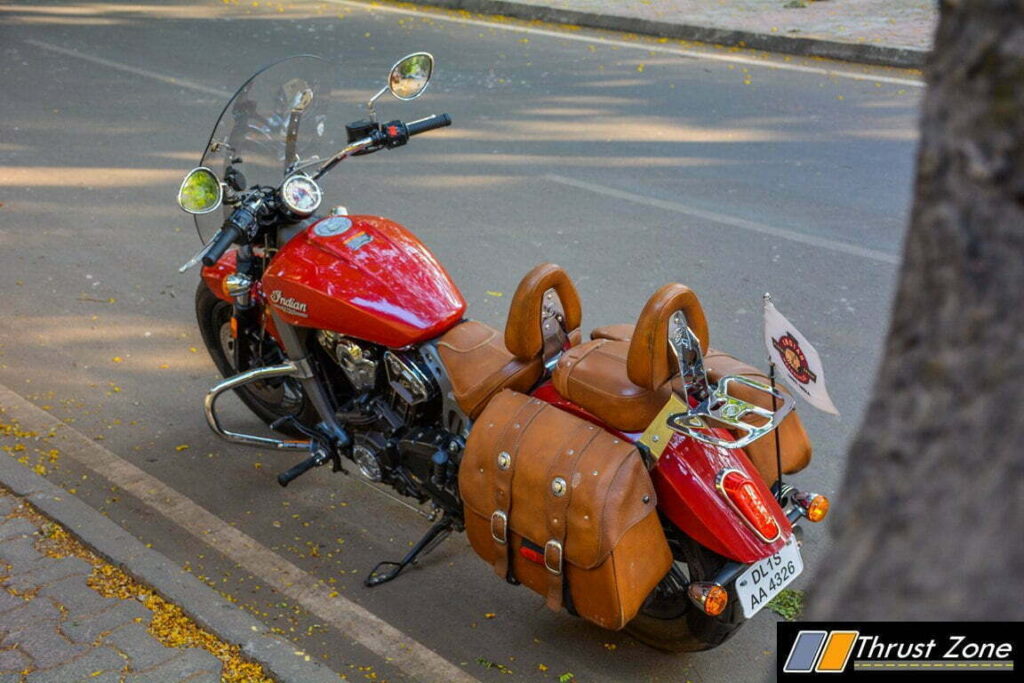 Indian Motorcycles, made it to India and you can blame to confusion to Columbus who found America instead of India. However, today we have a particularly gorgeous Indian Motorcycle product finally with us for testing and its called Scout. We spend a limited amount of time, so this is our first ride review of the motorcycle. Let’s find out, want impression the Scout Sixty left us with in the short time. 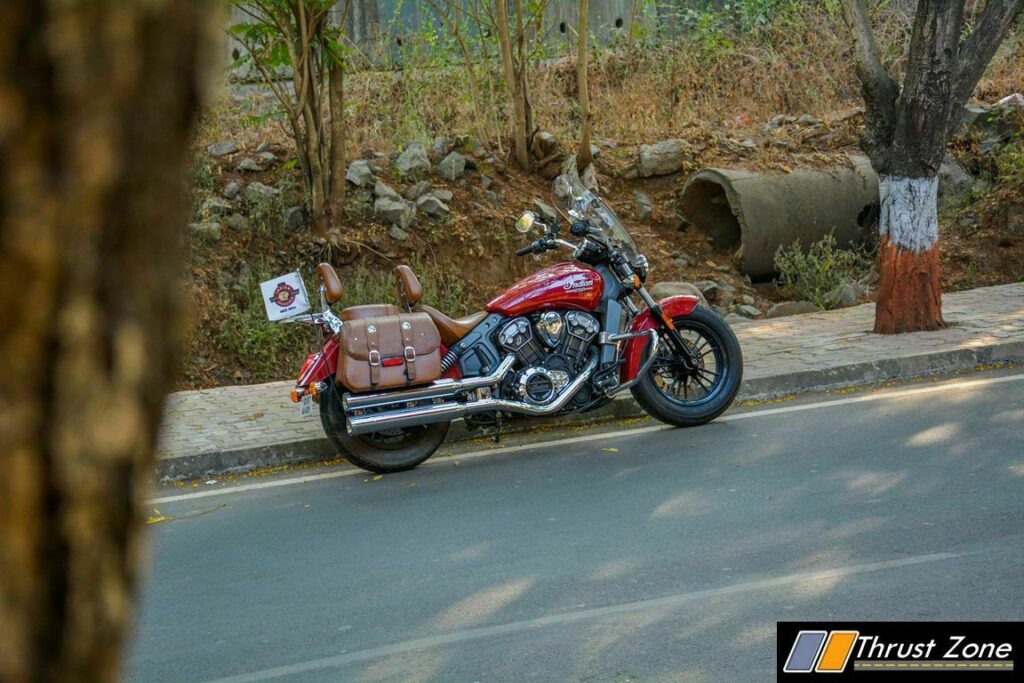 Styling
When it comes to design, the entire motorcycle comes together in a fairly organic flow as each panels naturally progresses into another. The classic layout means the fuel tank does the talking along with the engine craftsmanship with a large chrome tail pipes.  The fat suspension and tyres with large fenders give it a traditional look. In this Indian’s case, everything stands out and gains a lot attention as the size and every dimension marks its road presence. The rear is very old-school with large tail-lamps but had LED units to give it a modern “cool” look. The round headlight at the front and large windscreen add to the cruiser look. The leather bags our test bike added further retro appeal which mde it look good along with same beige color seats on offer. Overall, the red color and beige color used for other things truly helps it stand out. 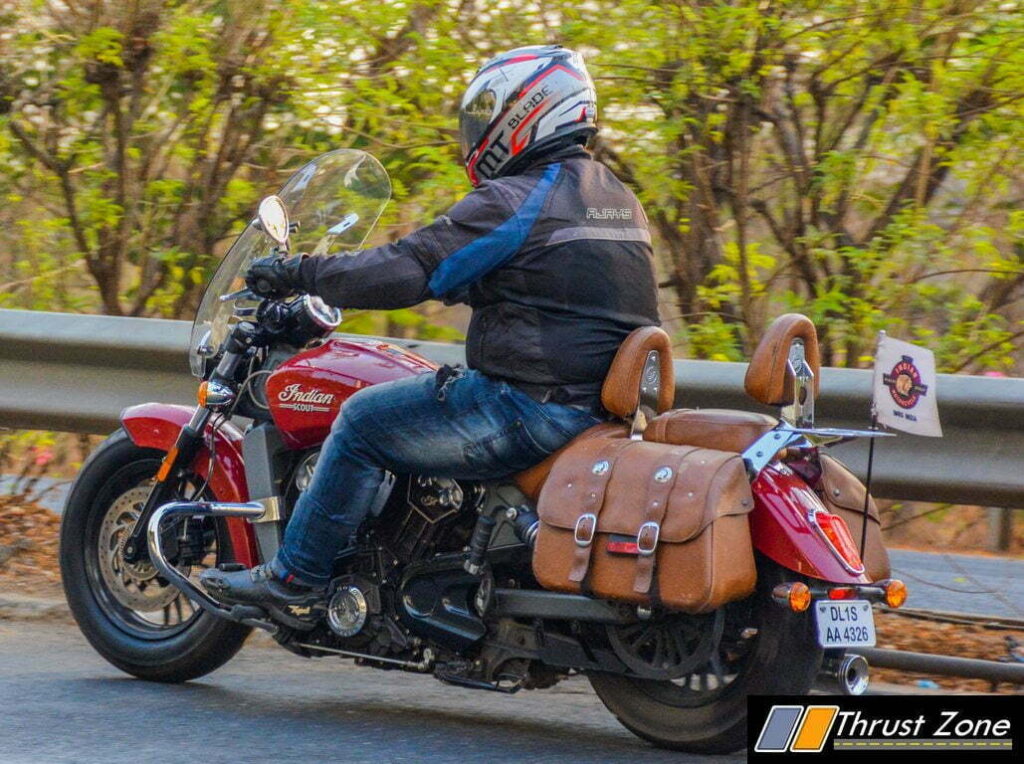 Ergonomics
Ergonomics is also a standard affair with front set footpegs that are set a way too much in the front. The handlebars falls to your hands perfectly, gives it commanding riding position. The mirrors do the job well of showing what is behind. The seats though are quite small for rider and pillion which limits the riders with large builds. Overall, seats could be better, but the riding position is spot on and gives you flexibility to move around 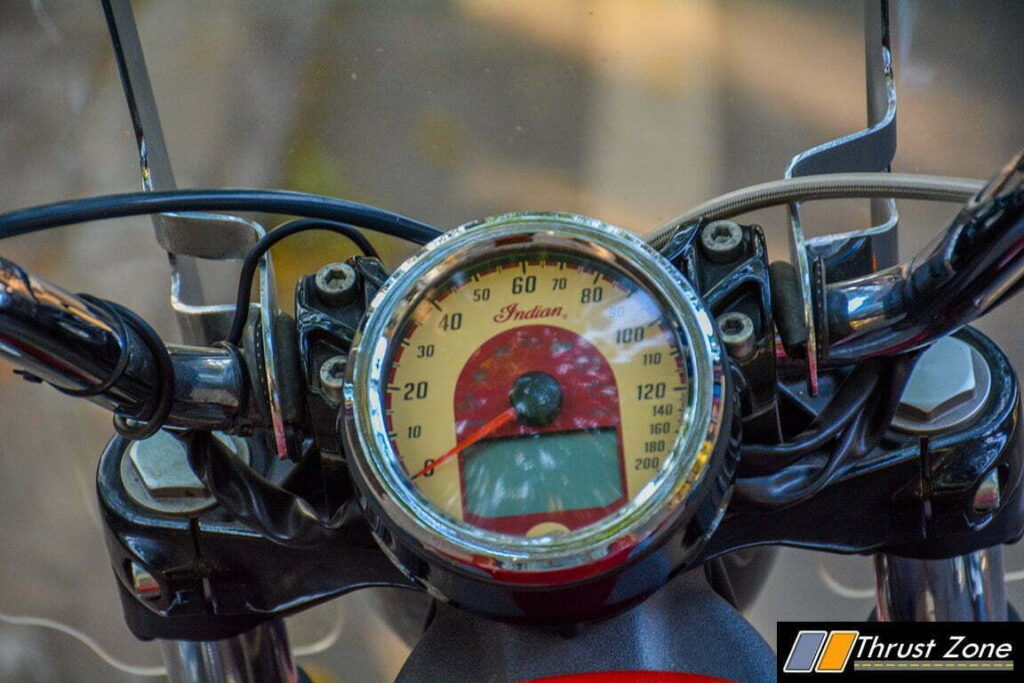 Speedo and Switches
Cluster is quite basic with a single dial which doesn’t have a button to toggle around but it shows odometer, tachometer, speedometer and the rest of the tell-tale lights, including fuel light is part of the same list. The Scout is quite scarce in this aspect, but the dial does look rather modern and retro cool which does the job rather well adding the “cruiser feel” to the package. 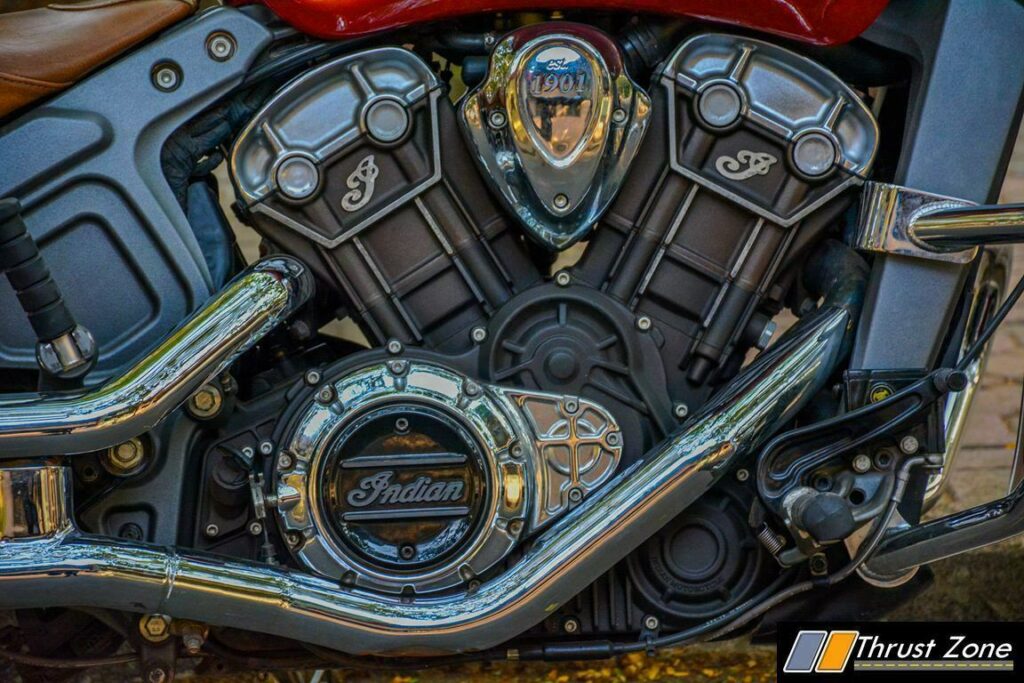 Engine and Gearbox
When it comes to performance, the engine is the huge highlight over its competition. The motor is an absolute cream when compared to the competition. The smoothness, refinement, the precise gearbox is a joy to use. The Scout makes around 100 PS of power and 97.7 Nm of torque and it does 100 km/hr in first gear itself! If you take it to the redline, where the engine is rather friendly than most of its rivals. There is power everywhere in the power band, the gearing is a bit taller, but doesn’t necessitate a downshift so often as normal bikes. The motor is mated to an 6-speed which further helps in providing more power throughout the rev band and mask the bulk of the motorcycle easily. 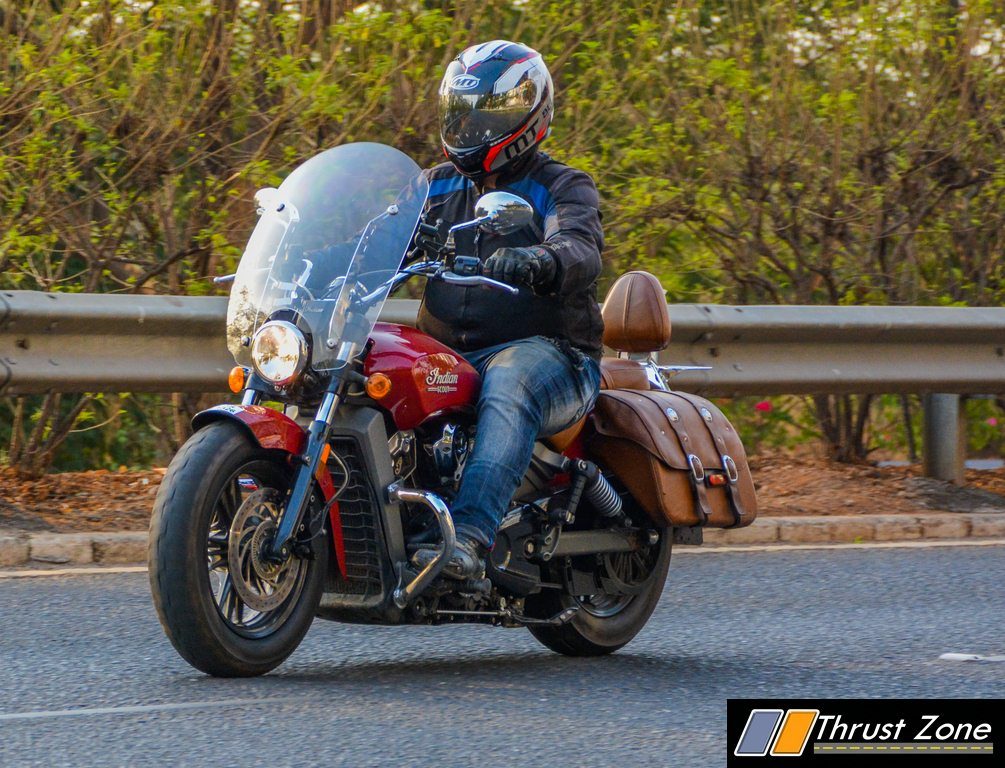 The pushrod engine is one of the best in the business but it does heat up and in Bombay summer along with a chaotic traffic route of testing saw us witness a lot of heat coming from the engine. Throttle response is light and precise which makes easier to modulate. The cruisers are clearly meant for the open highway and empty Sunday morning streets and not daily commuting. Clutch is hard and heavy, but one does get use to it in time. Exhaust note is loud and subtle at the same time. It may sound like the competition from the outside but only the rider can understand the distinct tone to it. Overall, a slick job by Indian, one of the many reasons to buy the bike is the far more superior engine tech despite maintaining the heritage of the brand alive in the characteristic the way the power is delivered. 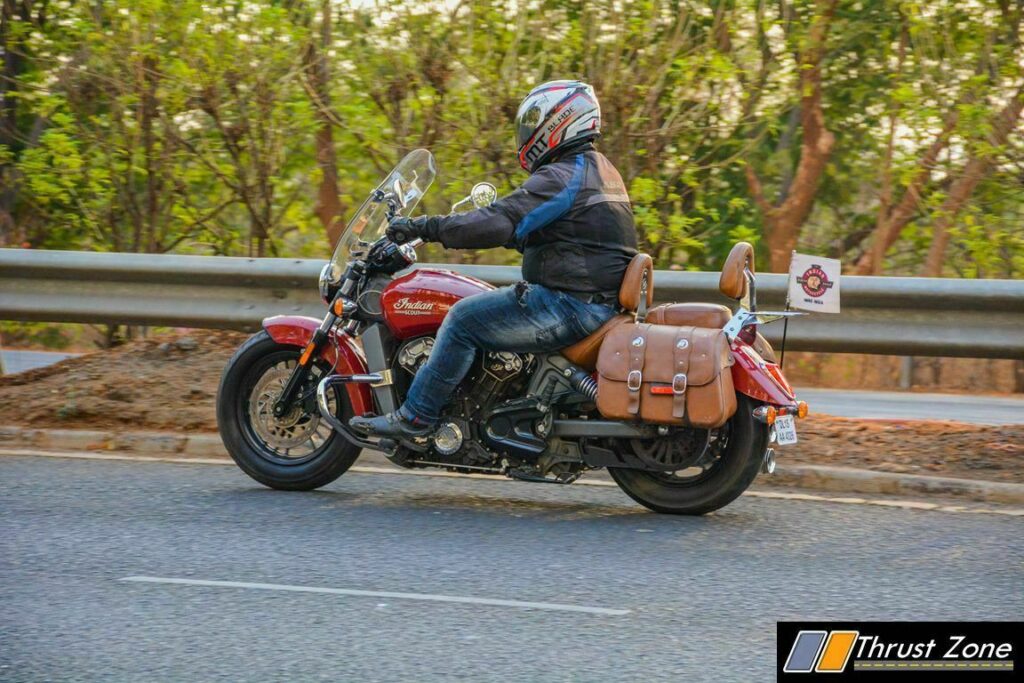 Ride and Handling
Dynamically it is a standard affair, ride quality is good and so is highway stability. Front is a little too light which helps in city duties but when hard on the brakes, the rear does get fishy, but the bike manages it on its own, which is great thanks to very good damping and a lot of kerb weight. If tyres would have been better, we think the overall dynamics would be better as well. However, as a standard cruiser there is no doubt, that here also the ease of use, the comfort on offer along with good brakes in feel and power help the rider enjoy the ride. There is a hint of sportiness which will be well appreciated by enthusiasts and is the highlight of the India Scout overall riding experience. 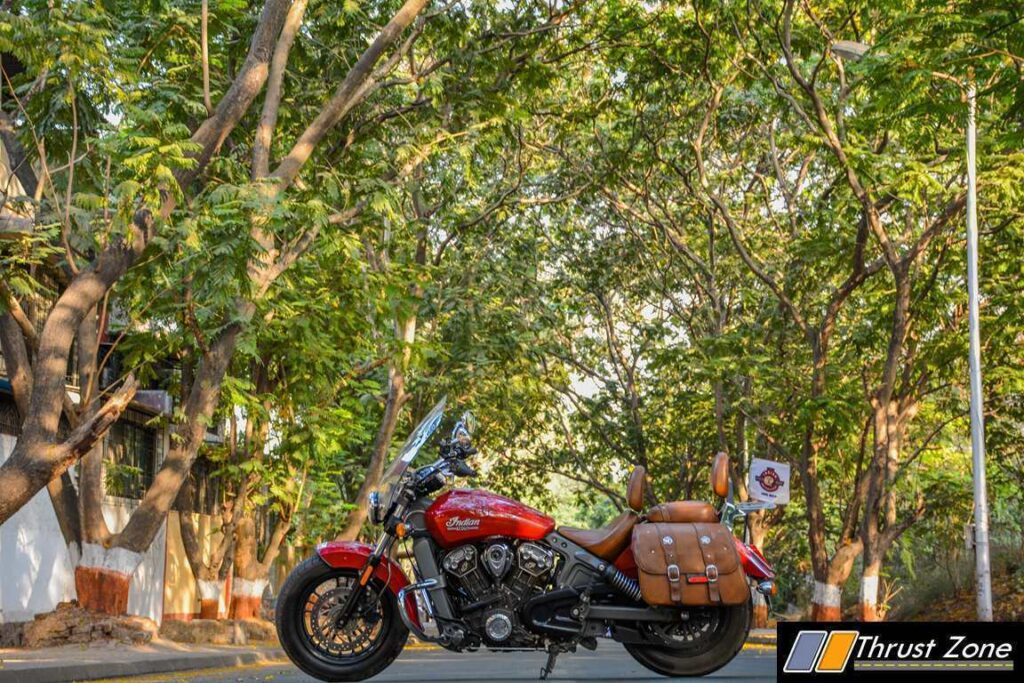 The Indian Scout bike segment, is the entry to the brand does deserve all the attention. The Scout comes with a great engine, more exclusivity, offers much more refinement which aids in riding experience to be much higher than the competition. The pricing is spot on too and there isn’t anything to complain about the bike and things don’t get better than this.

BMW Motorrad HP4 Race Weighs Less Then Dominar 400! And Is Powerful As A WSBK Bike!