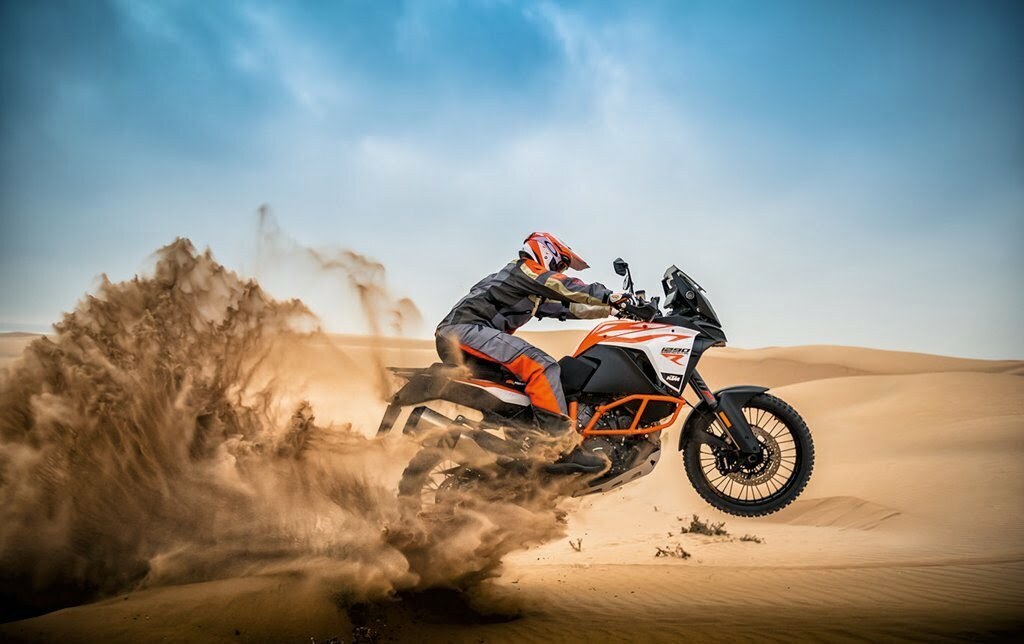 The 2017 KTM 1290 Super Adventure R can be considered as the Austrian company’s ultimate travel-enduro machine. Powered by a 1301cc V-Twin the bike makes 160bhp. The suspension setup comes from KTM’s subsidiary, WP Suspension and has been tuned for more aggressive off-road duty. This has been achieved by revised fork settings and spring rates; the rear gets WP PDS shock for maximum capability. The 2017 KTM 1290 Super Adventure R has also undergone restyling and now features an LED headlight with integrated cornering lights. The whole front fairing is now much more aggressive than the old bike.

KTM has also provided the 1290 Adventure R with a new 6.5-inch TFT display along with a cruise control for assisting touring capability. You can also add an optional Travel Pack that brings Hill Hold Control and Motor Slip Regulation. The options also add a KTM-first Quick-shifter that enables both, up and downshifts. You will also get display and Bluetooth control of incoming calls and audio on the new TFT dash with the Travel Pack. Other interesting bits on the 2017 KTM 1290 Super Adventure R include Keihin engine management, electronic-fuel injection, Ride-by-Wire and slipper-clutch. There is also an Off-road ABS mode allows for dirt-specific ABS application and Four-mode traction control.

The 2017 KTM 1290 Super Adventure T can be considered as the more touring friendly cousin of the Adventure R. The bike is powered by the same 1301cc LC8 V-Twin producing 160bhp from the 1290 Adventure R. It also gets almost every electronic aid which is available on the ‘R’ as well. However, the “T’ also gets more premium comfort equipment for comfort. It has heated seats and grips, cruise control and WP semi-active suspension that continuously adapts to the road conditions.
2017 1090 Adventure R:

The 2017 1090 Adventure R can be taken as the younger and less powerful sibling of the 1290 Adventure Twins. However, KTM is calling the bike as “the purest off-road travel-enduro.” The bike features upgraded WP suspension, off-road wheels, traction control and a lean-angle sensitive ABS. KTM says that this 1050cc DOHC V-Twin is fuel-efficient and makes 125 BHP. The bike gets the same WP PDS rear shock from the 1290 Adventure Twins. It comes with Tubeless 21- and 18-inch wheels fitted with Continental TKC 80 tires. The electronic aids feature KTM’s Motorcycle Stability Control (MSC) package with multi-mode Combined ABS, ride mode technology and multi-mode traction control (MTC). The 2017 1090 Adventure R also gets Four-mode traction control (MTC) including Sport, Street, Offroad and Rain settings.