2017 KTM RC390 continues to offer the same bang for buck and gets emission friendly and offers a new tech to India riders, ride by wire

Bajaj in India is carpet bombing the performance market. The company is making sure it offers everything in the new year to make sure the riders have all the options necessary to make the purchase. Right from Pulsar’s to KTM’s everything is set to come. The surprise for January is that the motorcycle from KTM which are most popular have been launched. THE KTM RC390 and KTM 200 have been launched. Here, we have the details of the KTM RC 390.

Apart from cosmetic changes, there ins’t hardcore panel changes on the KTM RC 390. The white and orange scheme looks good and the orange wheels and tyres will make sure it stands out.

KTM Claims it gets racing chassis and the same suspension seen at the front and the rear. The Metzeler tyres are being offered. The 320mm front disc brake is seen here to make things better. There are adjustable levers on offer this time. The engine is the same 373cc engine that makes 45 PS of power and 35 Nm of torque. The internals haven’t been changed on the motorcycle. However, it gets a slipper clutch, side slung exhaust, EVAP and CAN BUS system to stop evaporation of fuel to make it efficient and emission friendly. The liquid-cooled 4-valve, DOHC unit will continue to offers stunning performance and ride by wire will make things a lot more smoother.

ABS is standard on the motorcycle 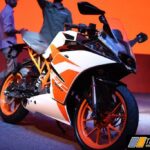 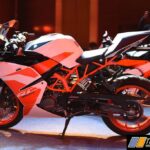 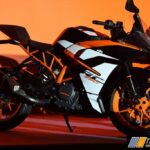 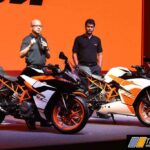 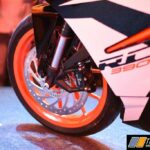 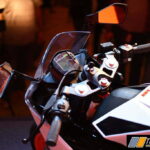 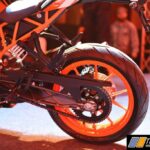