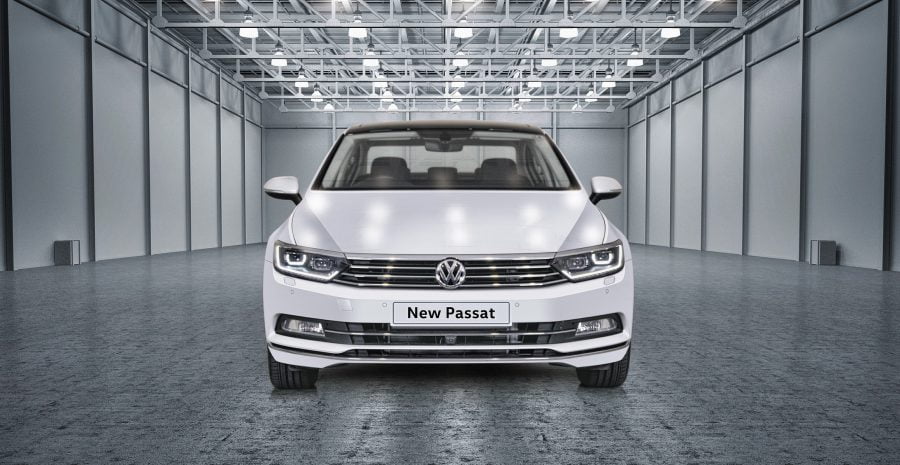 2017 New Volkswagen Passat TDi production has begun in India. We bought you the first spyshots of the luxury sedan in December 2017!

Over the years, the market segment where cars like the VW Passat play has dwindled owing to the rise of the SUV’s. However, there still a customer base that has a significant interest in this segment. The Toyota Camry especially with its Hydrid variant has been bringing rather brilliant sales number each month as well. That is not all; the Skoda Superb has always been a go to car for the people who like luxury of a proper executive sedan perfect for being chauffeured in.

Then add the fact that Honda has just re-launched the Accord in the country after a hiatus, albeit in a hybrid version this time around. With this aid, VW has also started testing its eight generation Passat in India earlier this year and today, production has begun and launch is set to happen soon.

The new model is evidently much sleeker than the outgoing model and with the headlights being more curvaceous and exotic looking than the old cars typical VW rectangular deign. This makes the car look far more premium than the one it will replace. Further, it is a known fact that the 201 VW Passat is slightly shorter than the old car. However, VW claims that the space for occupants has increased overall. Also, from the way this car looks it is almost as if it was first designed for the ‘CC’ coupe version first and then the sedan came into being. Simply stunning!

On the inside the car is slated to get an elaborate list of new features. The car will have a new 12.3 inch digital instrument cluster. This component has been sourced from the latest Audi TT and needless to say ups the premium quotient of the car. The car also gets a nifty head up display tech along with an improved infotainment system which probably will have the Apple CarPlay and Android Auto compatibility. The luggage space is also said to have further increased to 586 liters, an increases of 26 liters above the old car.

The Passat could be available in two variants, the Standard petrol powered variant that will be assembled here and is expected to be priced around Rs. 25-30 Lakhs. The other, will be the GTE variant which is a Plug-in-Hybrid and it will be a CBU units and would cost above Rs. 40 Lakhs price tag. The Car is expected to launch in November 2017. The 2.0-liter TDi unit will be priced around Rs. 30 Lakhs.

The 2.0-liter TDi engine on the new Passat makes 170bhp and 350Nm while the standard petrol unit might be a 1.8-liter TFSI unit capable of 180bhp and 320Nm. The Plug-in-Hybrid version gets a 1.4-liter TFSI unit matched with a 9.9kWh electric motor with Lithium-ion battery pack. These too combined make 218bhp and a staggering 400Nm of torque. The transmission duties on through the range will be taken care wither by a 6-speed manual or a 7-Speed DSG automatic.

The car is slated to get most of the high end safety technology such as ABS with EBD, 6-8 airbags, among others.

The main rivals for the 2017 VW Passat are the 2017 Honda Accord Hybrid, Toyota Camry + Hybrid, and the Skoda Superb.