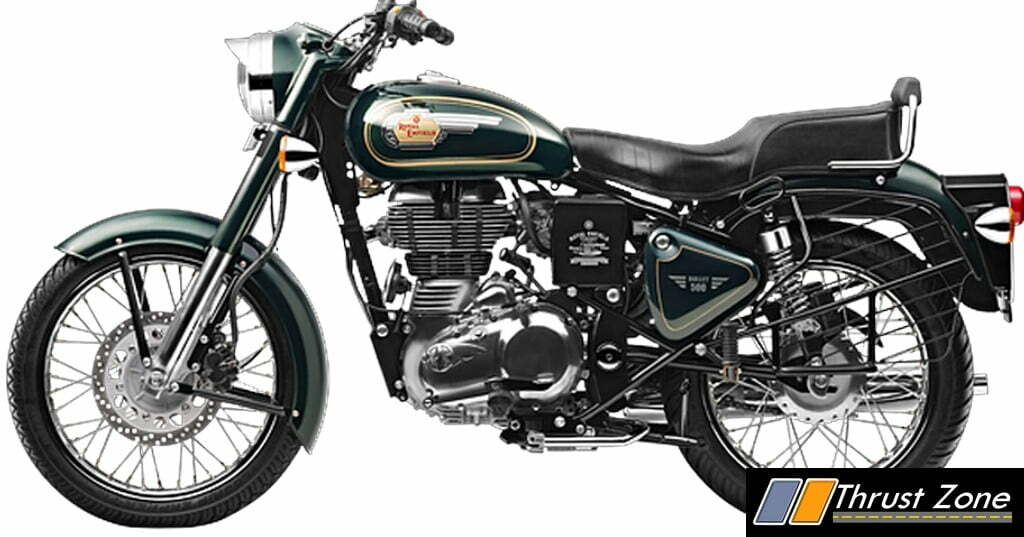 2017 Royal Enfield Bullet 500 is officially updated on Company’s official website, now comes with Fuel-injection and new colours. The bike is now BS-IV complained and matches the strict emission norms. The motorcycle is also likely to receive the Automatic Headlamp ON (AHO) facility as standard when it gets launched.

The 2017 Royal Enfield Bullet carries the same 499cc single cylinder engine which cranks out a maximum power output of 27.2 bhp along with a peak torque of 41.3 Nm. The Fuel-injection not only saves fuel, but also produces less harmful and toxic gasses into the environment and has low CO2 emissions. The fuel-injection system is more advanced than the carburetor but is more expensive too as it uses sensors and electronics. A fuel injector has an electrically controlled fuel delivery system. With the help of sensors, the ECU allows the required fuel to the engine and automatically helps in saving fuel and causes low emissions.

Alongside the Bullet 500 the company has also updated the Himalayan from carburetor to Fuel-injection as now according to latest law ruled by the Supreme Court. Seems like two-wheelers with carburetor cannot meet BS-IV emission norms in the RE range. The braking on the new Bullet 500 is done with the help of 280mm disc brake up front along with a 153mm drum brake at the rear, and carries a 13.5 litre fuel tank. Suspension system comprises of telescopic forks upfront along with twin shock absorbers at rear.

The latest Royal Enfield Bullet 500 Fi will be available at the company’s dealership across the country In India in three colours Marsh Grey, Forest Green and black. The prices of the new Royal Enfield are said to increase by a bit as now they come with a all new Fuel-injection technology which costs a bit more than the carburetor motorcycles. This though, is yet to be announced though.