Japanese two wheeler manufacturer Yamaha introduced the Fazer 250 on August 21, 2017. The recently revealed Fazer 250 is based on the naked street Yamaha FZ25 and is a full faired sibling of Yamaha’s quarter-litre motorcycle which also acts pretty much like it. The Fazer 250 also shares quite a few components with the FZ25 as well including the instrument panel, exhaust, taillight, and LED headlamp, cycle parts, including the wheels, suspension, chassis and brakes are also shared with the FZ25. Well, we have got our hands on the new Fazer 250 to let you guys know if this is the kind of bike you are looking for and what all is added and is different from its predecessor. 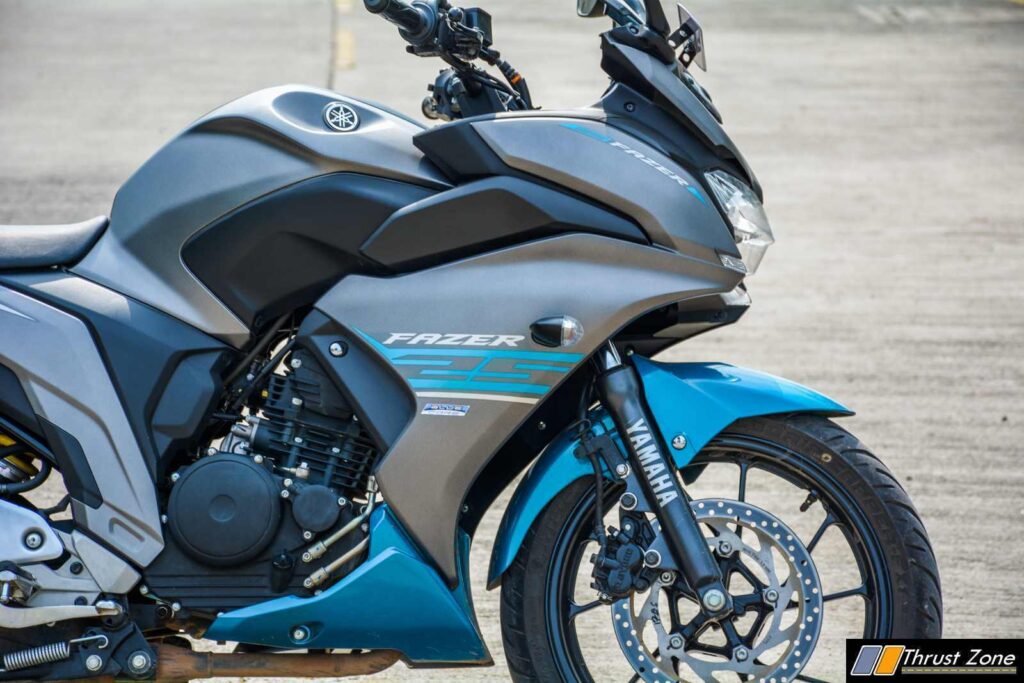 First up comes the design which is not personally our favourite and does not seem like a Yamaha product in terms of styling and design at the front. The fairing looks quite odd on the bike and will be the reason of dislike among the people, but keeping the looks aside the fairing overall is well integrated and well finished. The fairing is now fitted with a well shaped wiser above it which adds substantial mass to the front with brawny shoulders that feature air intakes on either side of the headlight which are sealed and has no functional purpose on the bike.

The full LED headlamp is a design similar to its naked sibling but gets a very attractive and stylish looking new LED DRL shaped properly below the headlight which enhances the look of this bike. The mirrors are placed accurately and offer good amount of visibility, which is a must. The ergonomics are quite same as that on the FZ25. The rear looks good as compared to the front end with a wide tyre and stylish LED taillight same as that on the FZ25. 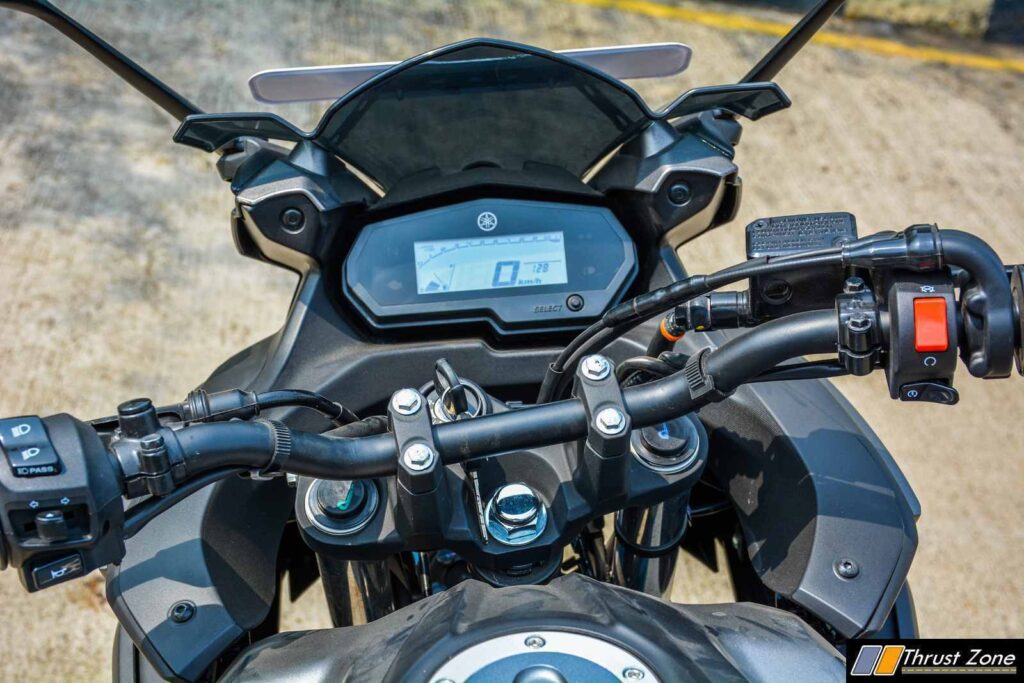 The switches on the Fazer 25 are neatly laid out with a high beam flasher and an engine kill switch, the all-digital instrument cluster is the same as that found on the FZ25 with its readout including speedometer, odometer, trip meter, taco meter, fuel gauge, clock, real-time fuel consumption, and average fuel consumption. The display looks sophisticated with a single long screen displaying all the information neatly and clearly with an orange light in the display unit. 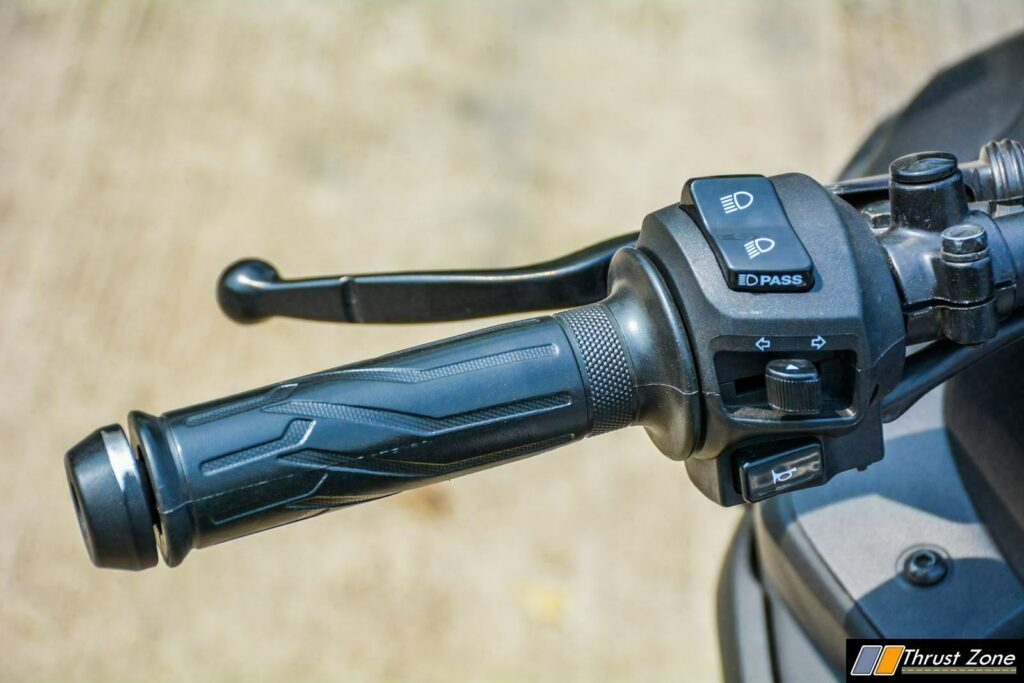 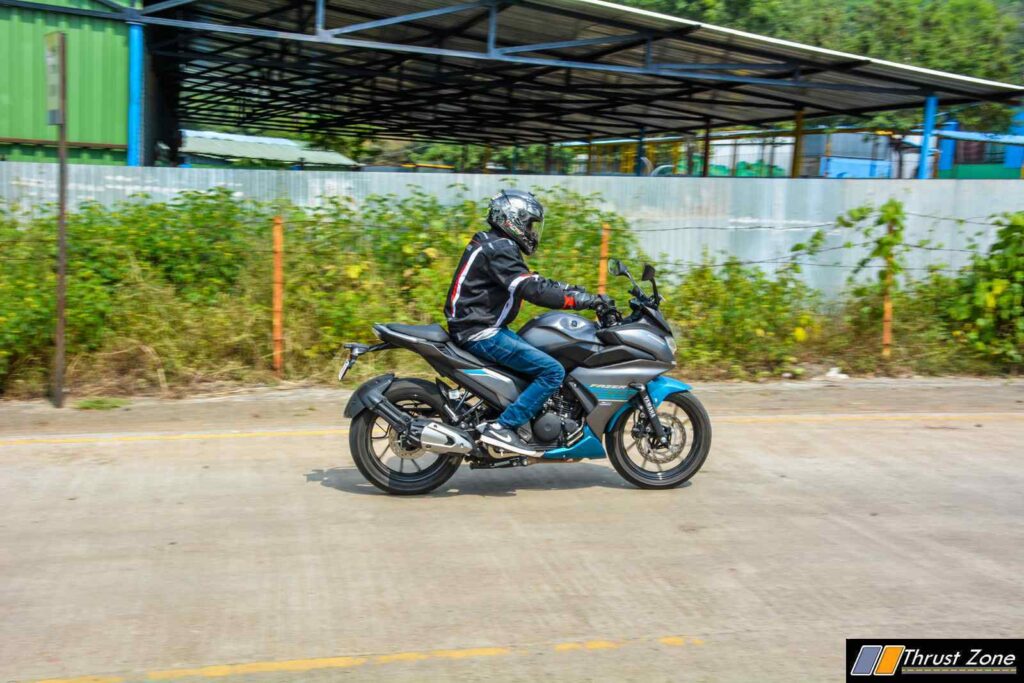 The Fazer 250 is powered by the same 249 cc air-oil cooled single cylinder engine which makes 20.9 bhp of at 8,000 rpm and 20 Nm of peak torque at 6,000 rpm. The engine, of course, meets the BSIV norms. The all-new Fazer 250 is not blistering fast but, makes up with a smooth refined engine with a tolerable grunt in the city which is quite good for commuting on daily basis. The engine is mated to a five-speed gearbox that is smooth along with a light clutch. We got 37 km/l while testing the bike. 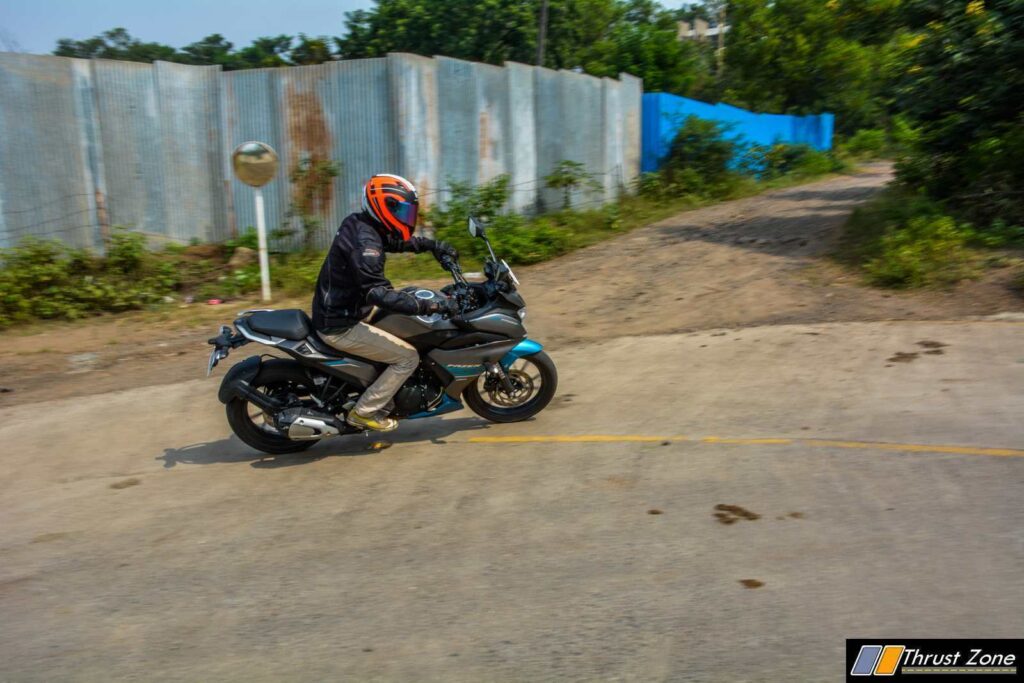 Performance is a bit lower compared to its naked sibling due to the additional weight of the fairing. After taking the bike for a spin we got to know how well the bike behaves as the power delivery on the bike is nice and smooth and the engine feels quite refined, linear and responsive thanks to the Blue core technology which helps in increasing combustion efficiency and reducing power loss. Low and mid-range torque is plentiful, but top-end power is just adequate thanks to no so tall gearing.

Suspension duties are handled by telescopic forks at the front and a monoshock at the rear which helps in absorbing the bumps quite neatly making the ride relaxing. The ride can be termed as stiff, not harsh. The motorcycle feels more commuter-ish than outright sporty against its competition. 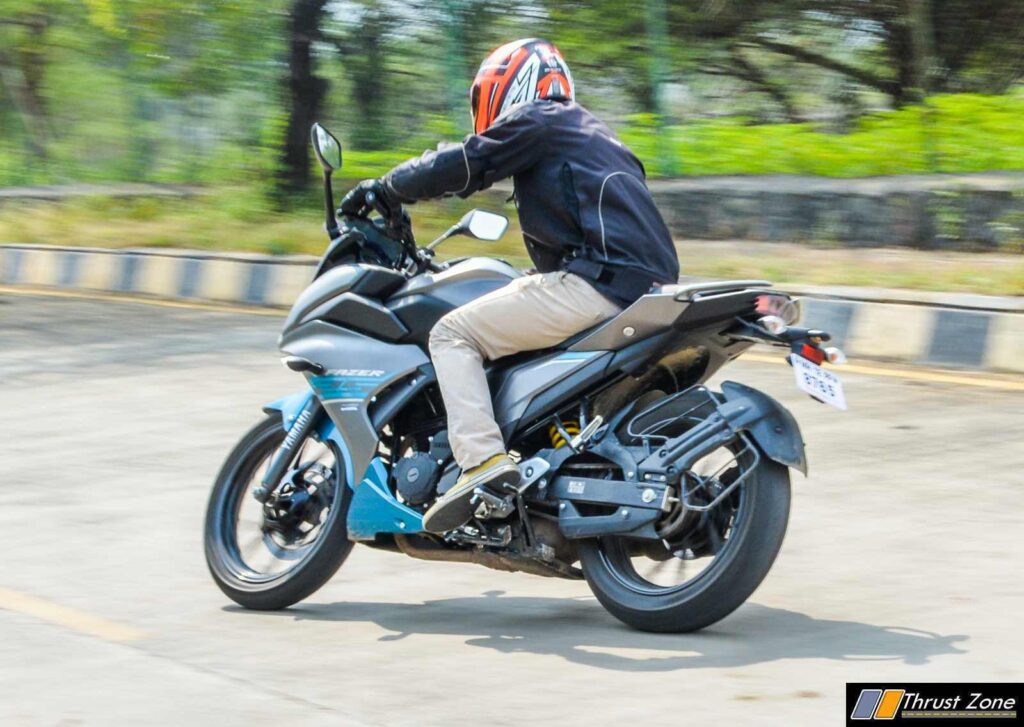 The bike feels good and one can ride it for a long time at higher speeds without any vibrations felt on the handlebar or the footpegs. The seating ergonomics are well sorted with a seat which is not that hard or soft but offers a great level of comfort for the rider as well as pillion. The windshield does quite a good job in fending off the wind when riding at high speeds on highways. 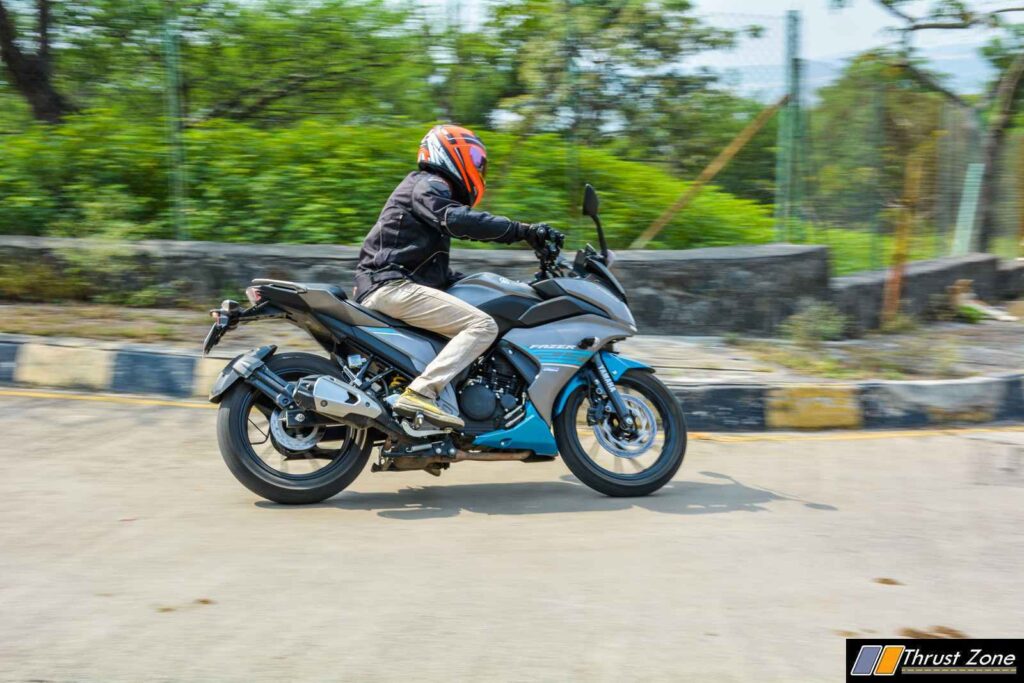 The wider tyre at the rear provide a superb amount of grip which helps in increasing the confidence of the rider and the bike feels in total control. Looking at the brakes we get a 282 mm disc with a 2-pot calliper up front and a 220 mm disc with a single-pot calliper at the rear which are very effective and does a decent job in stopping the bike from higher speeds as well as the bite at front and rear is just right too. What baffles us is the Fazer 250 does not have ABS on it. Even as an option to the buyers. 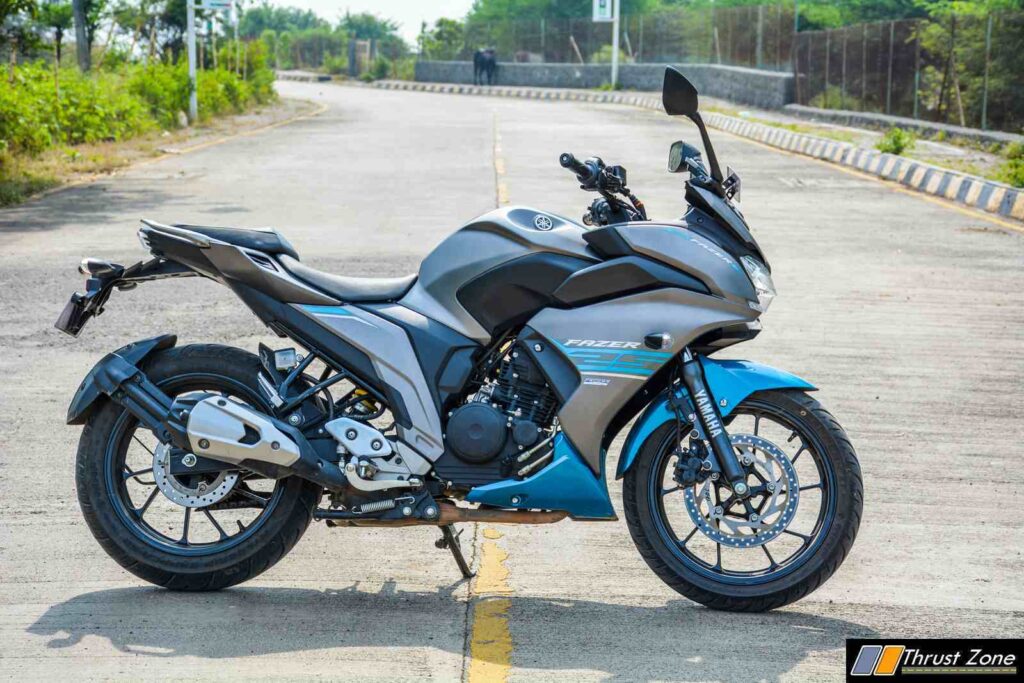 Well, to sum it up we did like riding this bike as the bike does not disappoint you when it comes to practicality and performance, that’s what we expect from Yamaha. But there are a few things on this bike we dislike thanks to its looks which just doesn’t appeal us that much. The front end of the bike looks odd and could have been better. The mirrors are way too wide and could be a problem when riding in traffic jams. 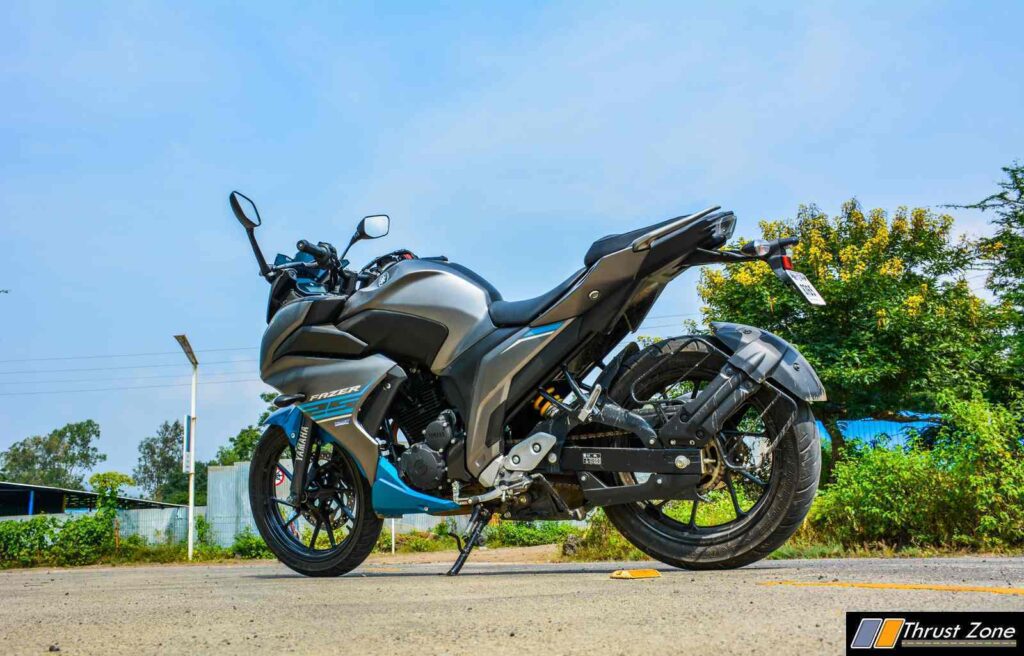 The good part is the relaxed 250 cc engine on it which is a good option for someone looking for an easy to ride and reliable touring motorcycle on a budget. Talking about the price, the new Fazer 250 is priced at a premium price of Rs.10,000 over its naked streetfighter sibling the FZ25 and retails for Rs. 1.30 lakh (ex-showroom, Delhi). Overall Yamaha has done a great job in building the Fazer and giving the bike a tourer look and feel at the same time.