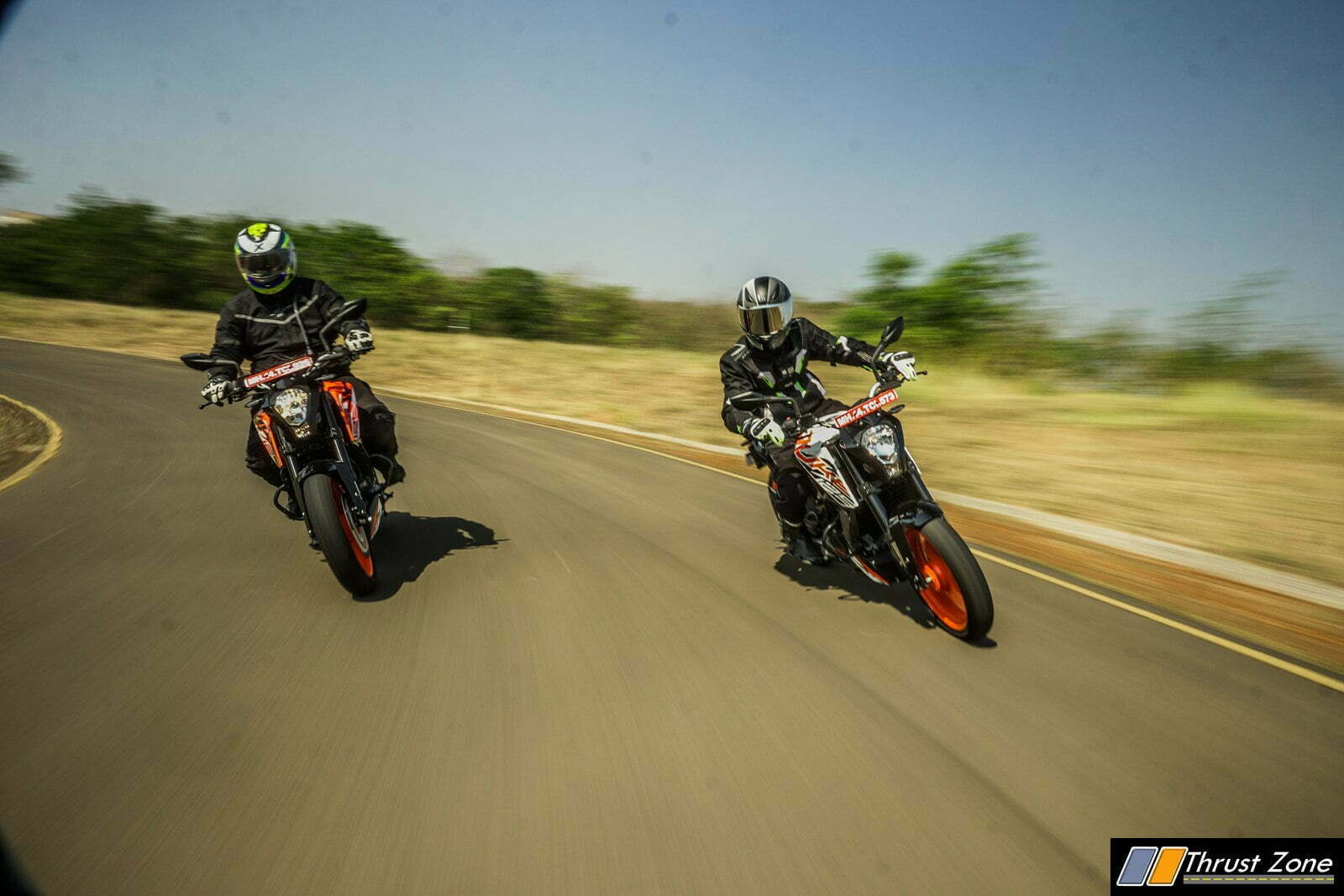 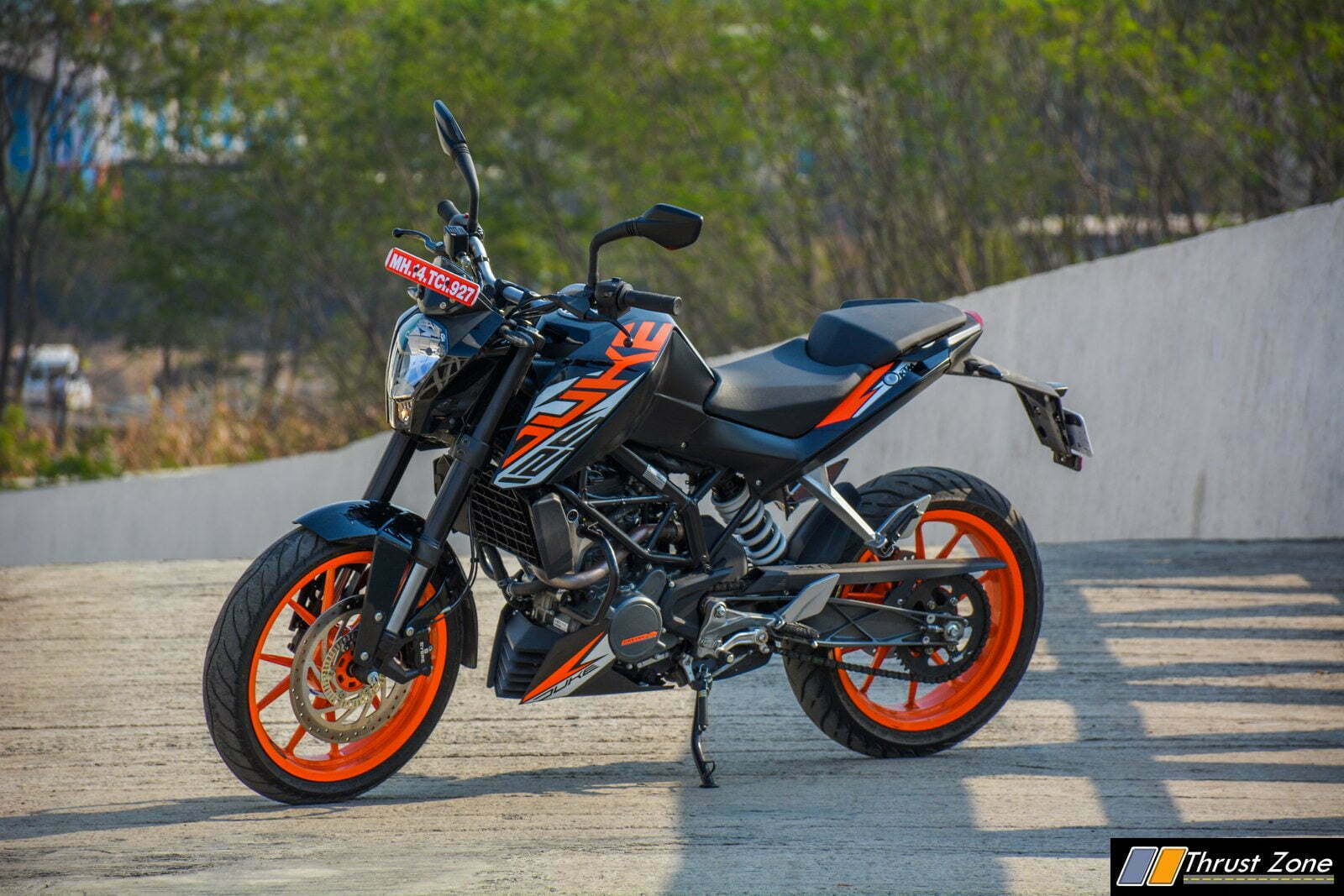 You thought it was not coming, but its here. The Duke 125 has made it to the Indian market, where it was being made, which is the case even today. However, there is a significant twist. What we all expected has come true. We have the previous generation Duke styling on the Duke 125 but the motor is the same that is sent to the export market. KTM says they launched it, theoretically, because the customer asked for it. 19 year old begged for a KTM, parents didn’t approve the 200cc machine. One of them, very likely wrote to Santa Claus, his wished got approved, he can buy a KTM and go to college, but on a 125, which sounds and looks like his favorite Duke 200. Second thing we all expected is the pricing, which also turned out to be higher. KTM says the risk seems worth it as the brand is strong enough to pull this off to a certain extent. It does have everything on paper. Let’s look at it and also allow us to tell you how it rides because KTM invited us to the Bajaj test track to give a first impression of this mini-me which aims to conquer the world just like its larger counterpart. How is it? let’s find out! KTM say they have poured in refreshing graphics on the old design which seems to still fancy a lot of people. The graphics are striking indeed and there is no way we can define them in detail. They are best absorbed with eyes. However, the black forks, chassis and most of the tank makes the bike look good in conjunction with the orange wheels and whichever body color you choose, the bike still does look good to our eyes as well. Clearly, we are not yet over our 2014 Duke 390 parked in the garage. The tall and stubby stance with minimalist design wasn’t to everybody’s liking in 2012, but its the same design that worked so well as time went by, the Duke 125 is here. Nice work team Kiska! 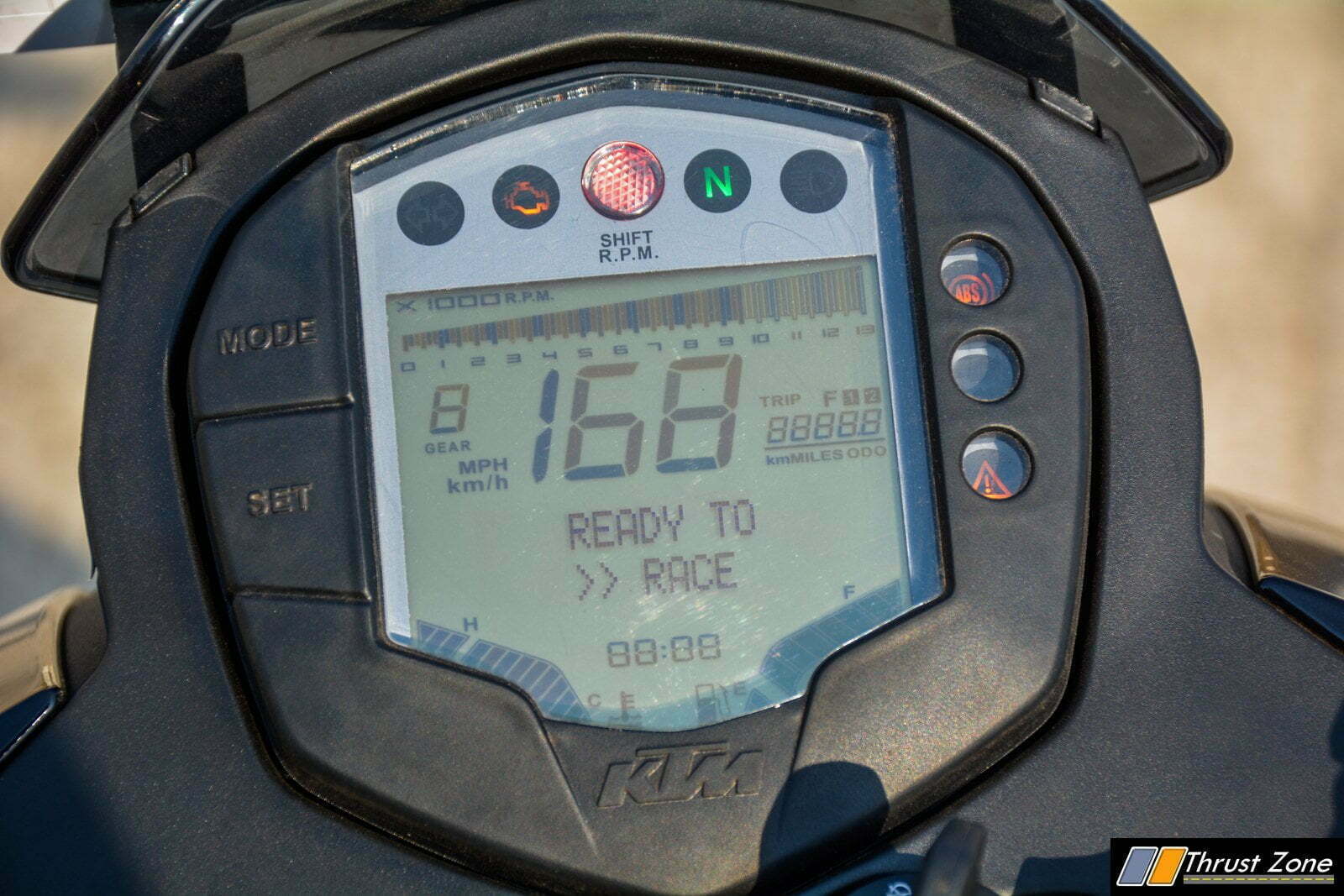 The meter is the highlight of the package despite its the old one because it has so many features for a 125! Fuel efficiency parameter, average speed, service reminder, clock, two trip meters, odometer and a digital speedometer and a not so visible digital tachometer is on offer. Switch gear is good quality, last long, is back lit and comes with AHO and engine kill switch. 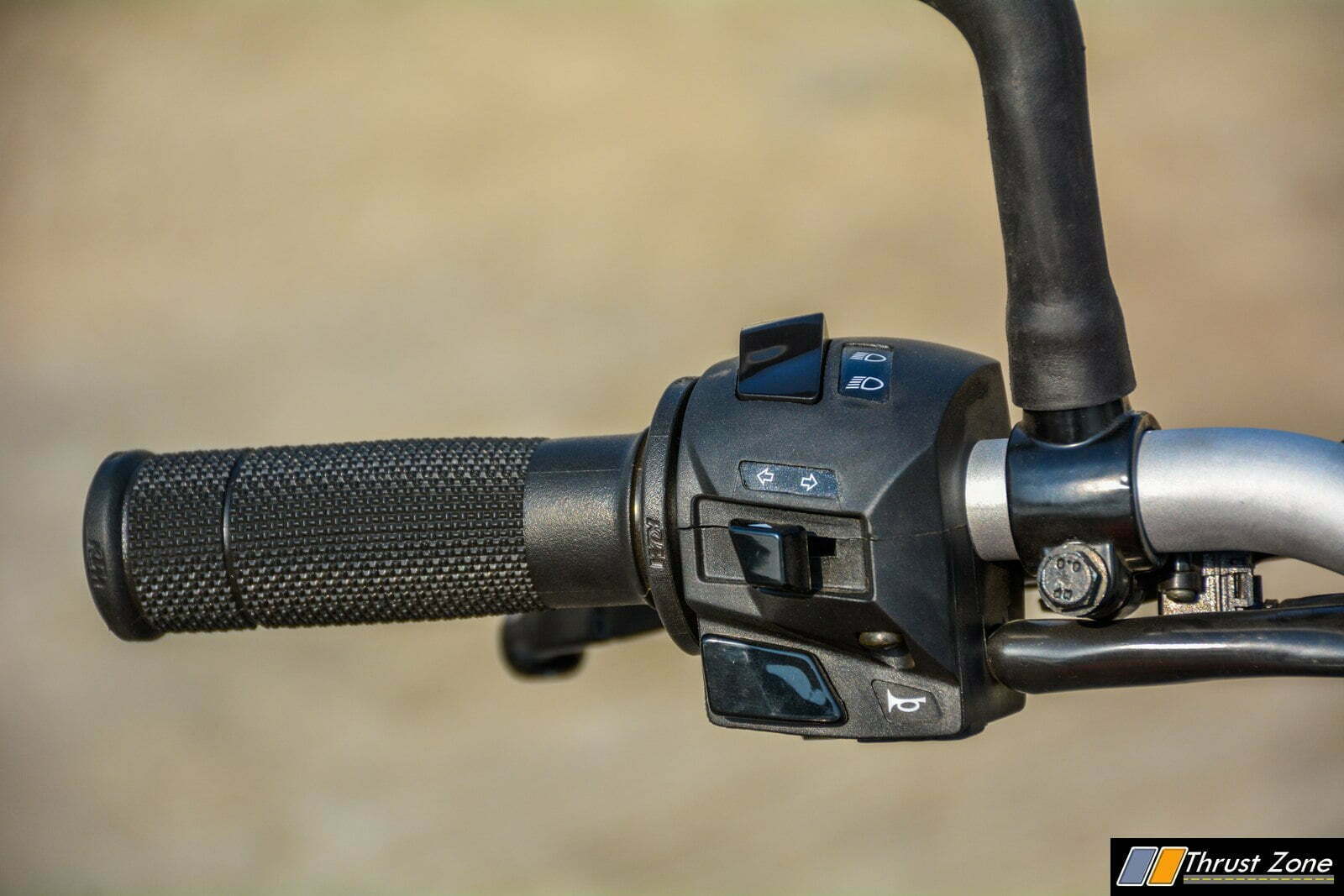 Ergonomics is of a bike which sits quite high, but the seat height is low at 818 mm. People with short legs and inseam will find doing a bit tip-toeing. Mirrors are mounted well and the view behind is good. Pillion seat continues to small and hard just like the rider seat, which is great for long distance and not so good for intercity rides. 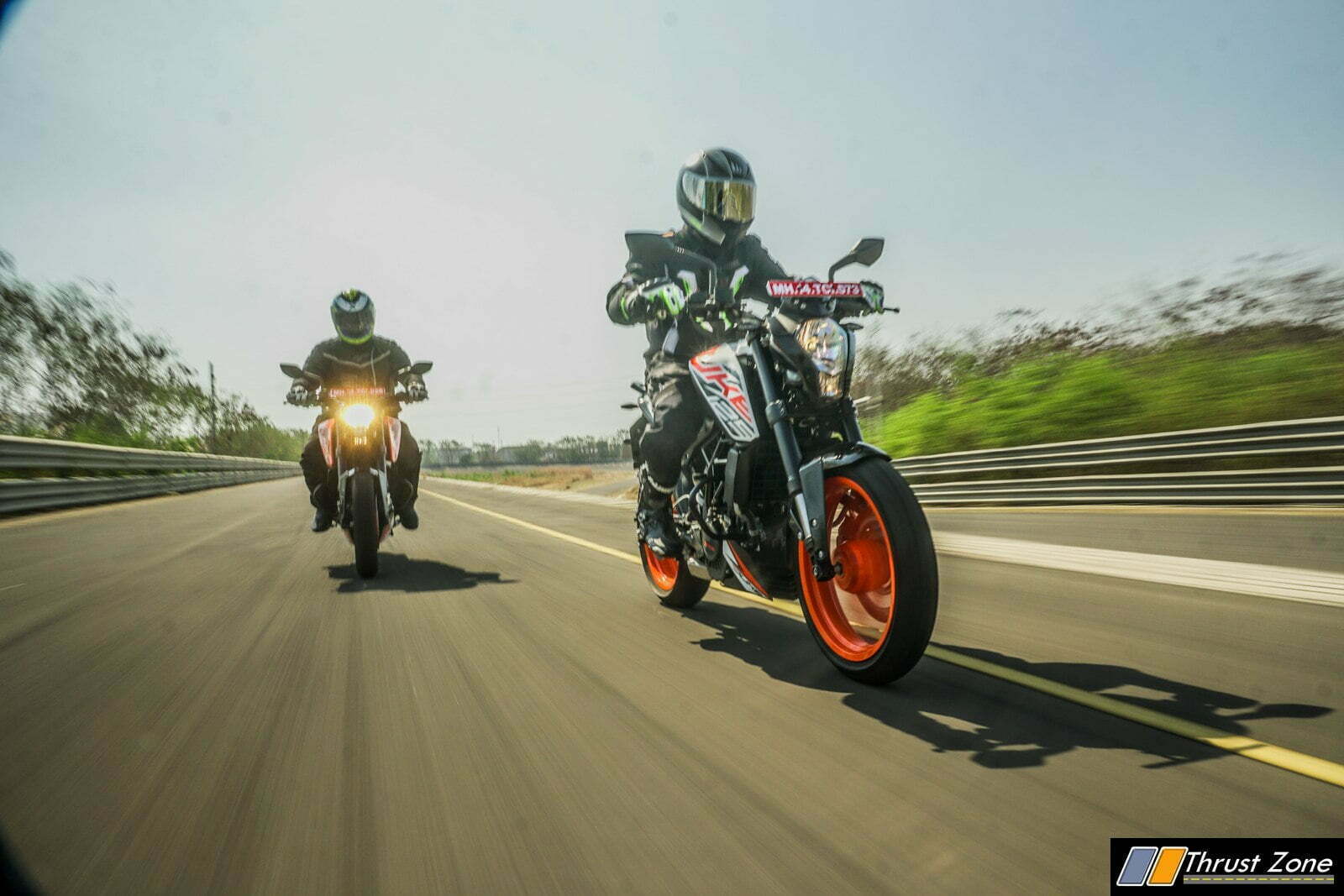 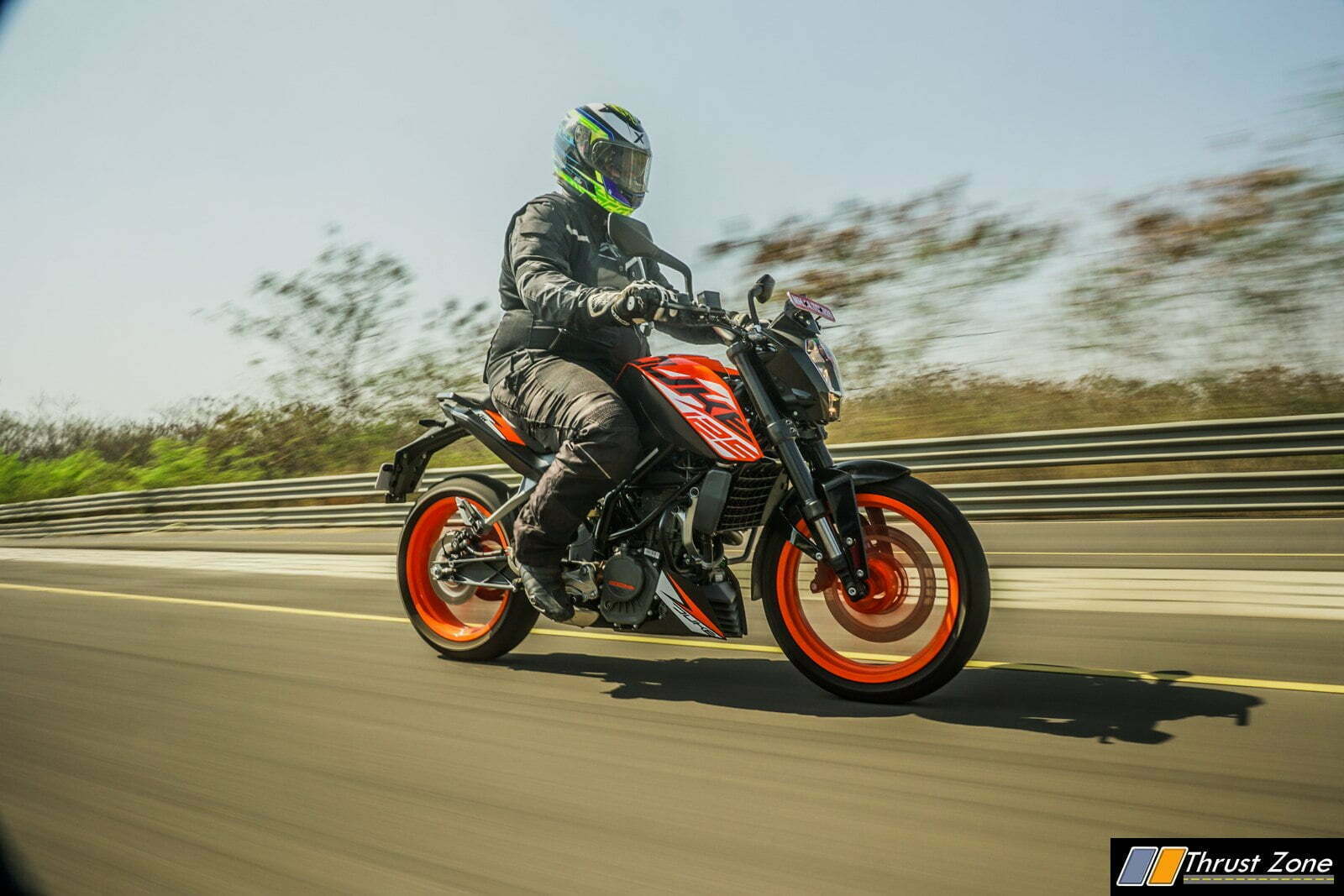 The ride on the Bajaj test track was limited and what we see is that KTM hasn’t cut corners at all. It has a single channel ABS at front. Rear lift mitigation at the rear, sticky C1 MRF tyres, USD forks from WP, Bybre brakes, braided steel lines and 10-step monoshock just like the Duke 200. The tyres also the same dimension as the Duke 200. All of this makes this bike so forgiving to ride. The confidence from the chassis in the Duke 390 with 45 BHP is so good that a motorcycle which is just a 125cc 14.5 BHP in the same package is something a 18 year old boy can start exploiting within couple of months of riding. 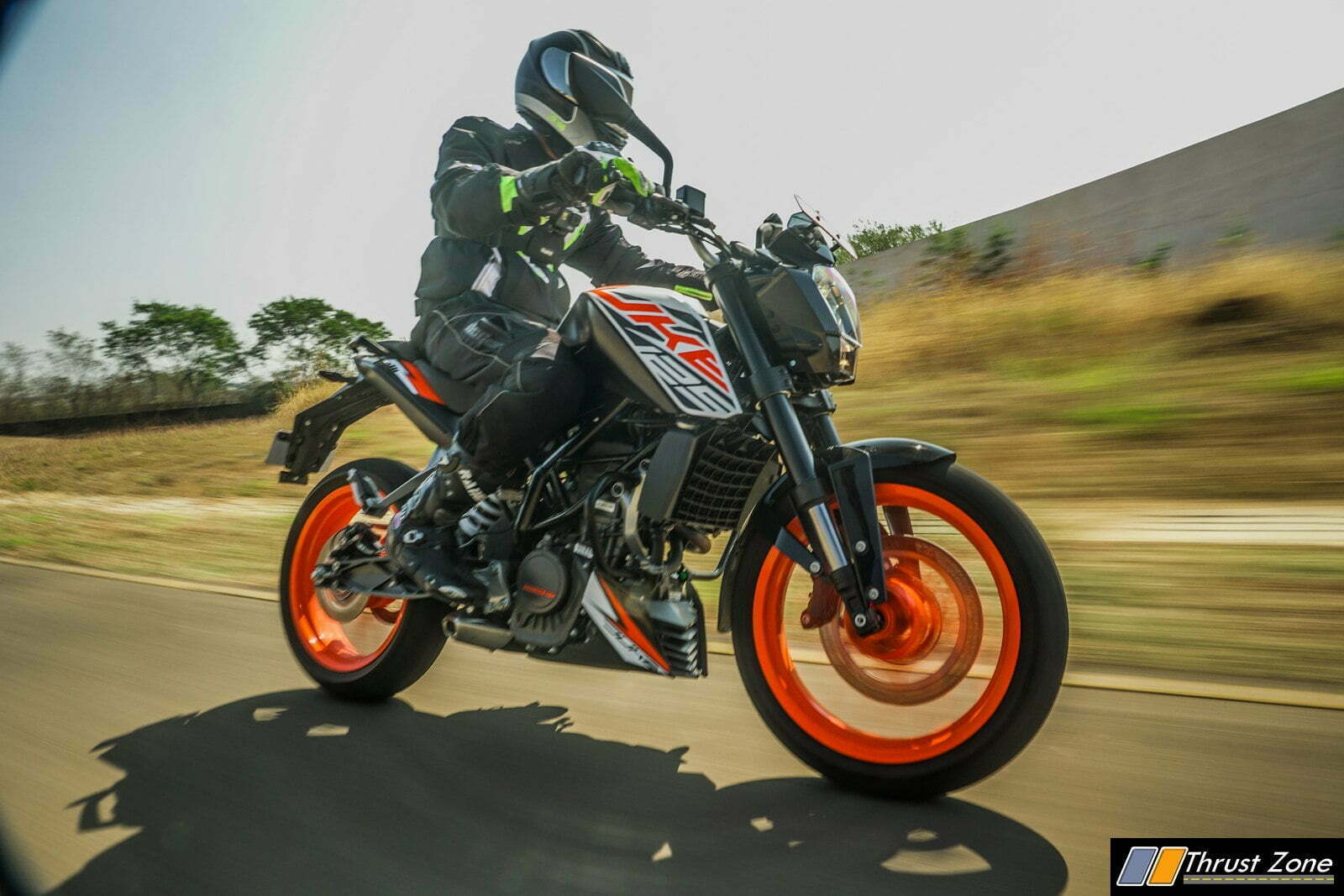 The thrill begins as you can push the motorcycle harder, learn your lines at the race track and then think seriously to upgrade from the three elderly motorcycles from the same stable. We were to able to push the bikes, find new prospective as the power wasn’t intimidating at all because the suspension, tyres, brakes and chassis are over engineered for this motor by atleast 3 times. The clutch is light and the 6-speed gearbox is butter smooth. 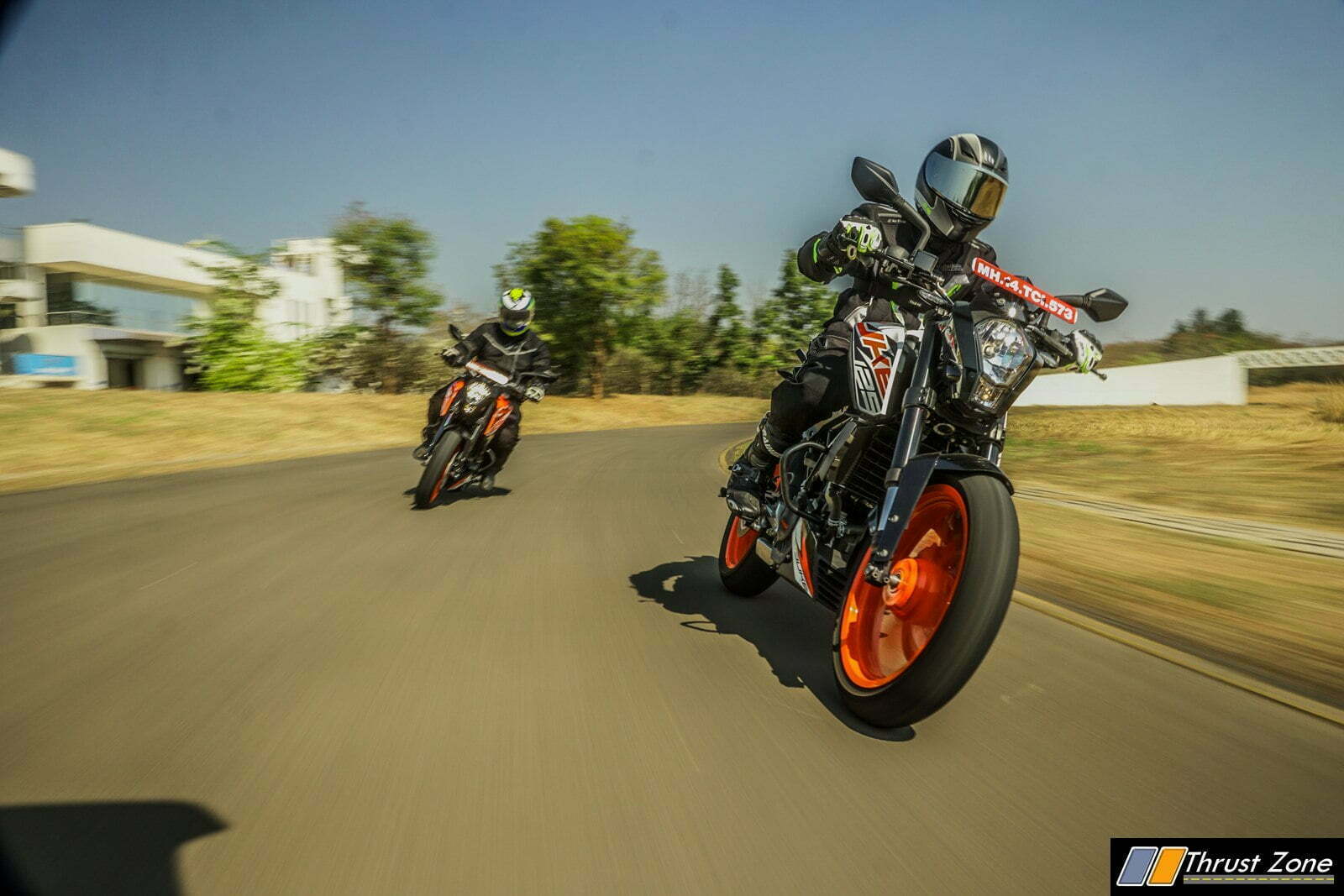 This platform gives a tonne of feedback, the agility and nimble-ness is unmatched, the stability is also very good. The free and fast revving motor makes this motorcycle enjoyable and give it typical Duke character without scaring you thanks to taller gearing, linear power delivery and a decent top speed of 120 km/hr which take times to achieve once you hit 105 km/hr. 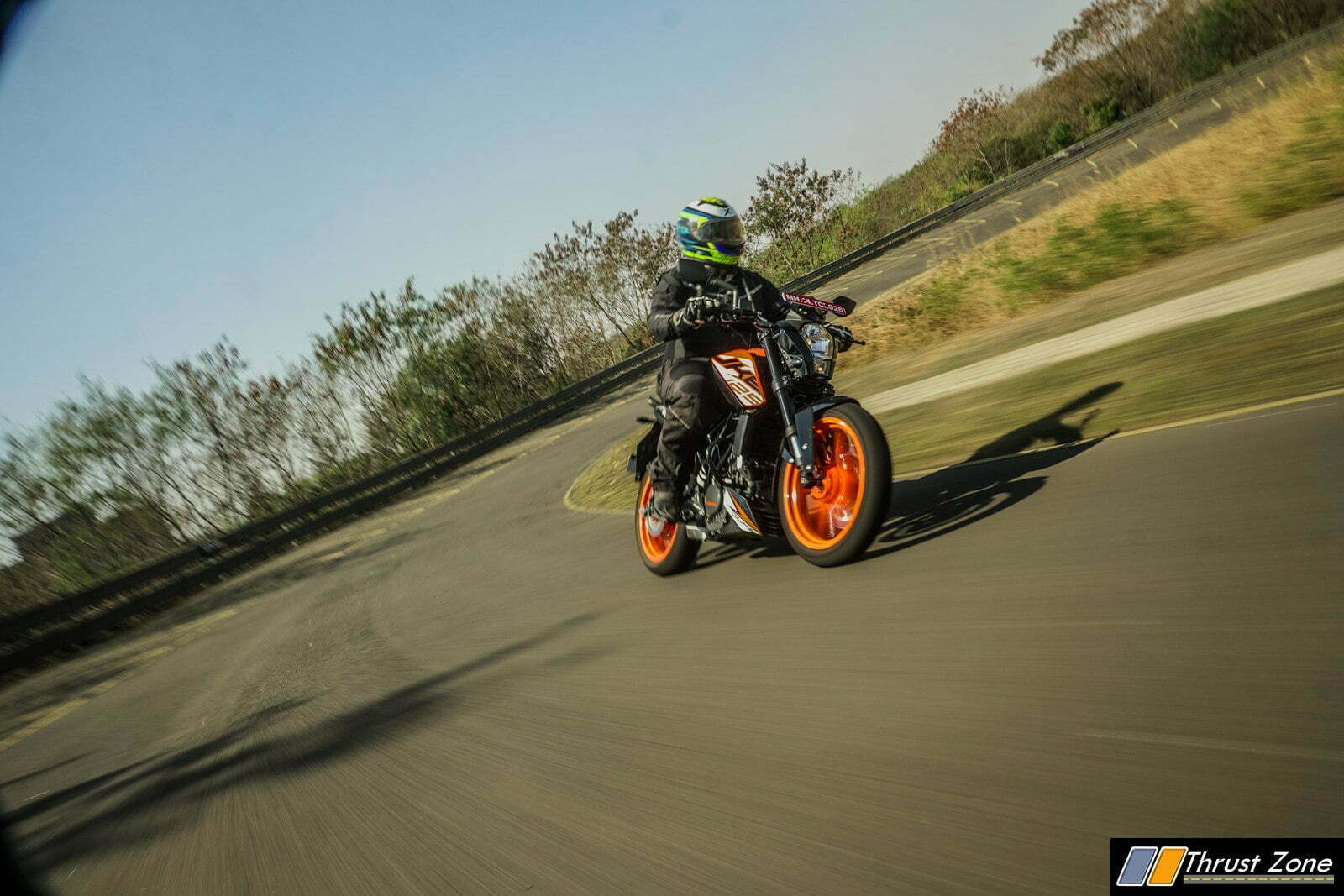 The power is focused at the mid-range and top-end is far away to attain because it is done in the interest to keep the motorcycle beginner and fuel economy friendly, a very Bajaj move that we have often seen in Pulsar’s. 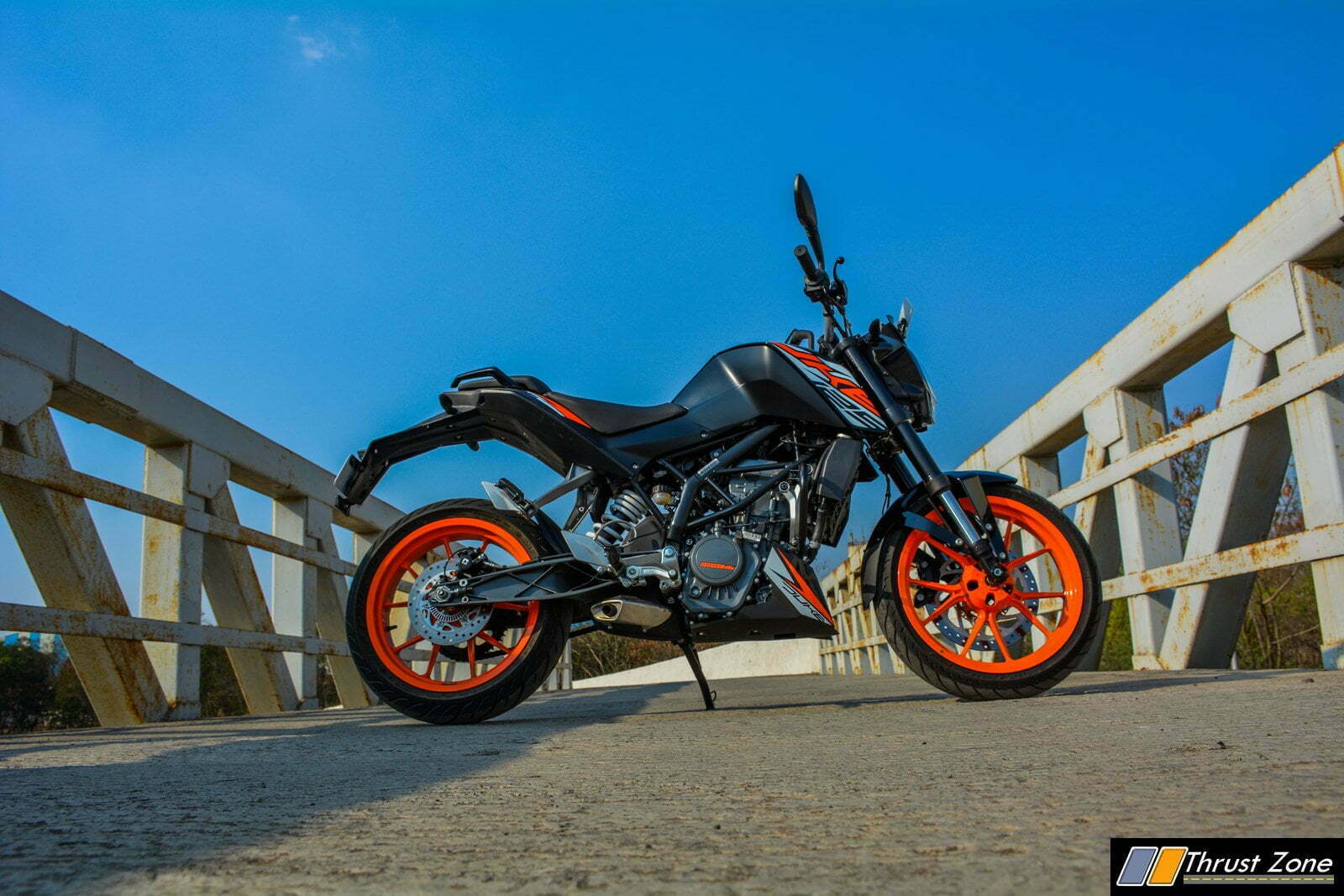 The Duke 125 is almost all praises then? Nit picking allows to point out that there isn’t a LED light, a slipper clutch and the ABS isn’t switchable, but clearly it isn’t required as the pricing is already quite high for a 125cc. Nevertheless, this is a bold statement, not a risk, by KTM to bring this motorcycle to the Indian market. 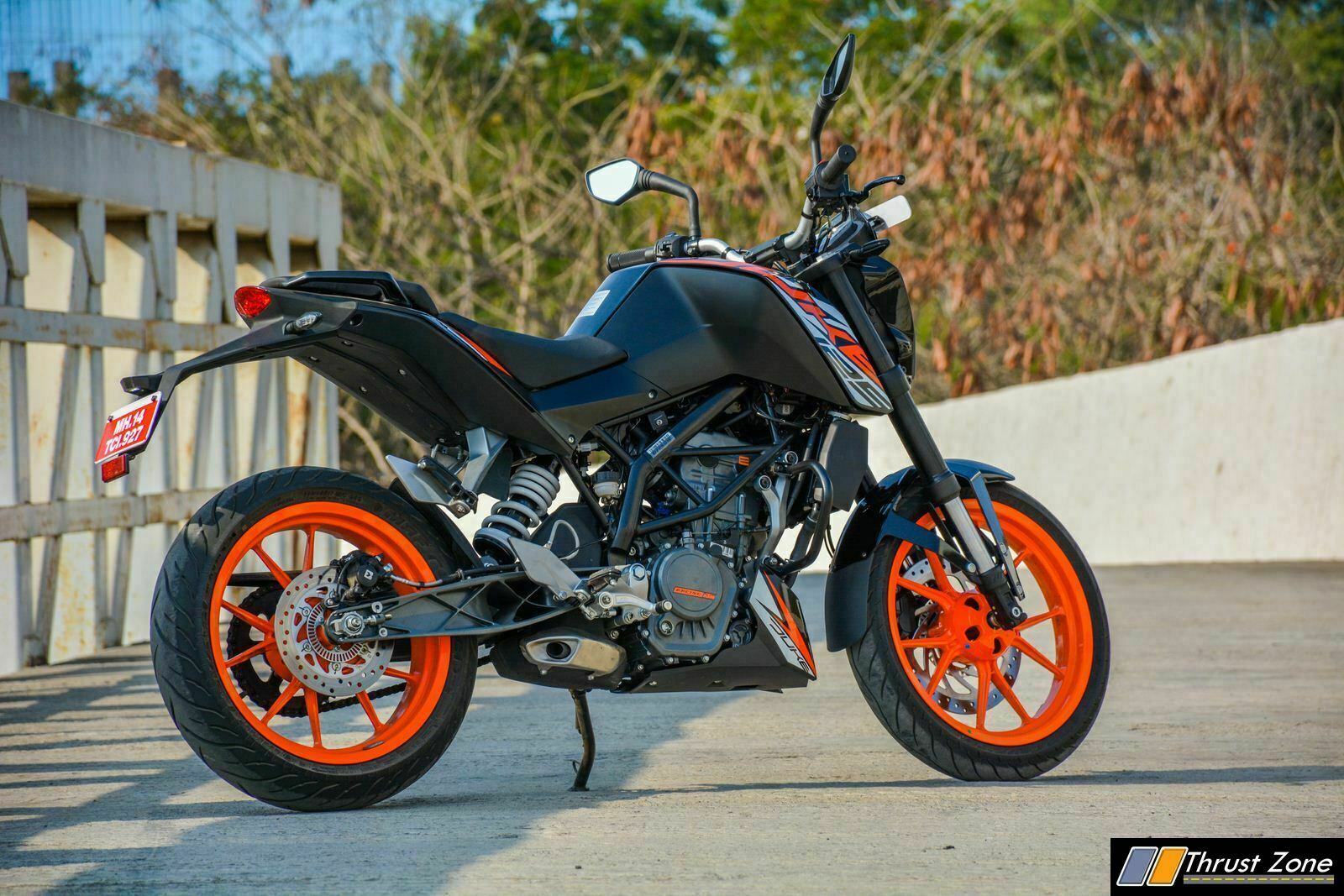 There was a demand, the KTM brand has kicked of as the best performance motorcycle maker in the country and even in the world thanks to recent launches. New riders wanted a KTM, this is what company can offer and we think its the sweetest bike to come from the stable of KTM, yet again as today’s generation should be thankful because we never had something like this when we were 18!