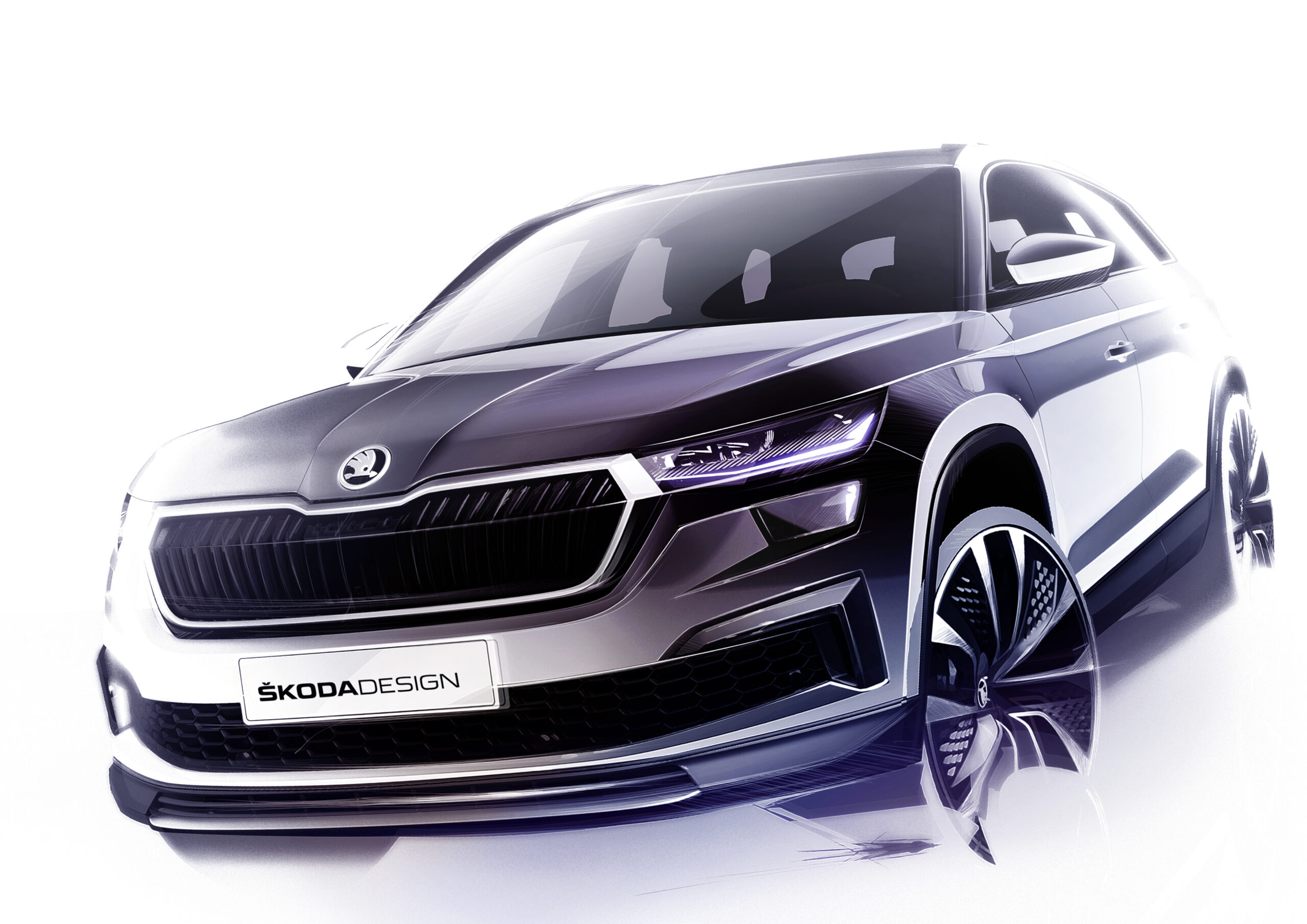 The Skoda Kodiaq is one of the more capable and luxurious SUVs on sale today and the offering has been around for some time. The Czech automaker is now looking to bring a midlife refresh to the brisk seller and the updated version was recently spotted testing in its home market – the Czech Republic.

Three design sketches give an initial impression of the new ŠKODA KODIAQ. The large seven-seater marked the commencement of the Czech manufacturer's successful SUV campaign the world over. The new facelifted offering features aesthetical and technological enhancements. The new ŠKODA KODIAQ will be celebrating its global premiere on 13 April and will make way to the domestic market later this year. The first design sketch showcases the striking front of the new facelifted ŠKODA KODIAQ: In addition to a redesigned bonnet, the look is characterised by a more upright, hexagonal ŠKODA grille featuring impressive double slats.

The headlights, which are slimmer than in the predecessor, combine with the fog lights, positioned below, to create a new four-eyed face. Another noticeable new feature is the redesigned front apron, with a wider central air intake framed by L-shaped elements on either side and an aluminium insert. The second sketch is a close-up of the redesigned front headlights. It clearly depicts the two LED modules, arranged one on top of the other, creating a characteristic light signature. The third sketch shows that the sharply drawn taillights now also have a more slimmed-down look, mirroring their counterparts at the front. They feature the brand’s signature crystalline structures and form a flatter version of the classic ŠKODA C-shape design. Over 600,000 units of the flagship ŠKODA SUV have been produced and is offered in 60 markets around the globe. The world premiere of the new ŠKODA KODIAQ will take place on 13 April.

Updates on the Skoda Kodiaq facelift will include cosmetic revisions like the revised butterfly grille with vertical slats, reworked headlamps that now integrate with the grille, and a new pattern for the LED daytime running lights. The foglamp design also seems to have been revised on the car, along with wider intakes on the bumper covered in honeycomb mesh. Changes to the side are minimal and we could see new alloys upon launch, while the rear is expected to get a revised tailgate. The LED taillights will be revised and likely to sport a new signature pattern as well. The rear bumper will also be updated with similar changes to the one at the front.

The cabin on the 2021 Skoda Kodiaq facelift could see subtle revisions. Do expect to see new features, more connected options and improvements overall. The dashboard layout could remain the same but the digital console, seat upholstery and other cosmetic bits could see updates. Globally, the Skoda Kodiaq is offered with a number of engines that will be carried over on the 2021 facelift. This includes the 1.5-litre TSI and 2.0-litre TSI petrol, and the 2.0-litre TDI diesel. Transmission options include the 6-speed manual and 7-speed DSG automatic on the SUV. The car is offered as a front-wheel-drive and 4×4.

For India, Skoda is readying the Kodiaq TSI for launch with the 2.0-litre turbocharged petrol engine. This is the same mill that also powers the Volkswagen Tiguan AllSpace in India and develops 190PS and 320Nm of peak torq

ue. Under the VW Group’s petrol-only strategy, it replaces the 2.0-litre TDI version that was discontinued at the end of March 2020 with the transition to BS6 emission norms. The Skoda Kodiaq 2.0 TSI is scheduled for India launch in the second quarter of 2021. Prices for the 2021 Skoda Kodiaq TSI will be over Rs. 30 lakh (ex-showroom).