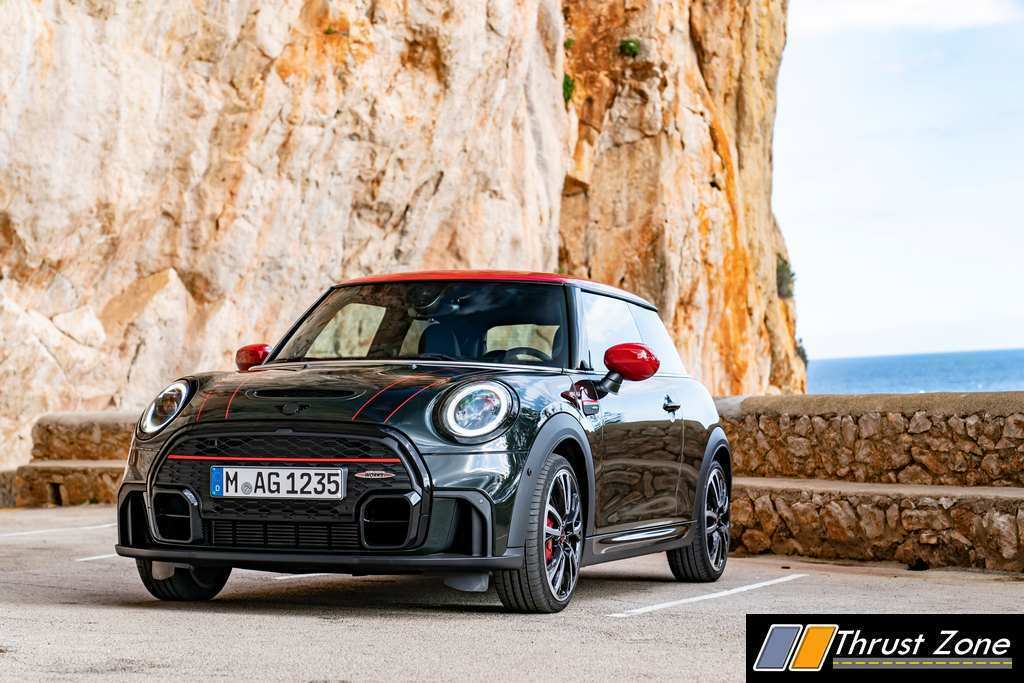 The character of the MINI John Cooper Works, which is consistently tailored to inspiring performance, is staged even more authentically by the British brand’s new, particularly clear and purist design language. At the front of the vehicle, the round LED headlights and the hexagonal radiator grille, which features a red crossbar and now extends far downwards, are particularly prominent. Enlarged cooling air openings ensure optimum temperature control of the drive and brake systems in extremely sporty driving situations. The model-specific side scuttles on the front side panels and the rear apron, which now features a distinctive diffuser to optimise airflow in the rear area of the underbody, have also been redesigned. 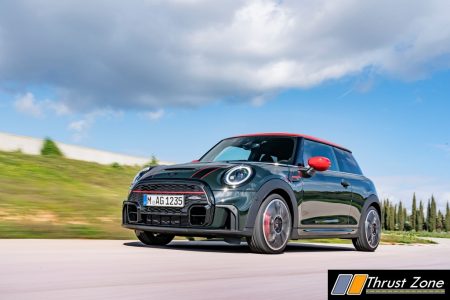 The expressive appearance reflects the impressive temperament of the MINI John Cooper Works. Its power source is the four-cylinder engine with MINI TwinPower Turbo technology, developed with the racing expertise of John Cooper Works, which develops a maximum output of 170 kW/231 hp and a maximum torque of 320 Nm from a displacement of 2.0 litres. After the start signal given at a standstill, it takes just 6.3 seconds for the MINI John Cooper Works with standard 6-speed manual transmission to accelerate to 100 km/h. In conjunction with the optional 8-speed Steptronic Sport transmission, the 100 km/h mark is even reached after just 6.1 seconds. 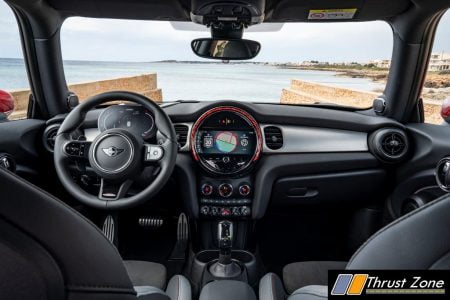 The model-specific sporty suspension set-up of the MINI John Cooper Works contributes to the agile handling, which not only thrills in fast right-left combinations on the race track, but also in winding city traffic. A new version of the Adaptive Suspension is now available as an option, which with its frequency-selective damper technology ensures an optimised balance between sportiness and ride comfort. An additional valve smoothes out pressure peaks within the damper when driving over minor bumps, thereby creating a harmonious driving experience. The necessary adjustment takes place within 50 to 100 milliseconds. Direct contact with the road is maintained during sporty driving. In the MINI John Cooper Works, the new Adaptive Suspension operates with more than ten percent greater damping force than before.

The Adaptive Suspension is also part of the John Cooper Works Trim, which is offered as an alternative to the standard equipment and also includes, among other things, exterior and interior surfaces in Piano Black high gloss, Dinamica/Leather upholstery in Carbon Black for the John Cooper Works sports seats and a particularly high-quality exterior paint finish. There is a choice of Chili Red, Rebel Green, available exclusively for the MINI John Cooper Works, or the new Island Blue metallic and Rooftop Grey metallic variants.

Individual wishes in the areas of comfort, connectivity and driver assistance can be fulfilled in a particularly targeted manner with the newly compiled equipment packages. These include new options such as steering wheel heating, lane departure warning included in the Driving Assistant and the Stop & Go function for Active Cruise Control. Park Distance Control (PDC) with sensors at the rear of the vehicle has been added to the standard equipment of the MINI John Cooper Works. 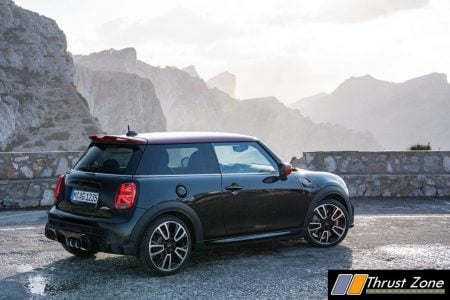 The MINI John Cooper Works now also features a redesigned centre instrument with an 8.8-inch touch display in black panel design as standard, as well as a new operating system whose modern graphic display makes the selection and control of vehicle functions, audio programme, navigation, communication and apps even more intuitive. For the first time, Live Widgets are available for this purpose, which can be selected by means of a swiping motion on the touch display.

Also new: the displays on the centre instrument and on the optionally available multifunctional instrument display on the steering column can be shown in two different colour worlds. In “Lounge” mode, the display surfaces appear in relaxing shades of blue and turquoise. Switching to “Sport” mode causes the screen backgrounds to glow in red and anthracite. On request, the colour worlds of the displays can be linked to the MINI Driving Modes that are standard in the MINI John Cooper Works. This means that when the SPORT driving mode is activated, the display colour changes at the same time as the accelerator pedal and steering characteristics and, optionally, the damper and gearshift characteristics.