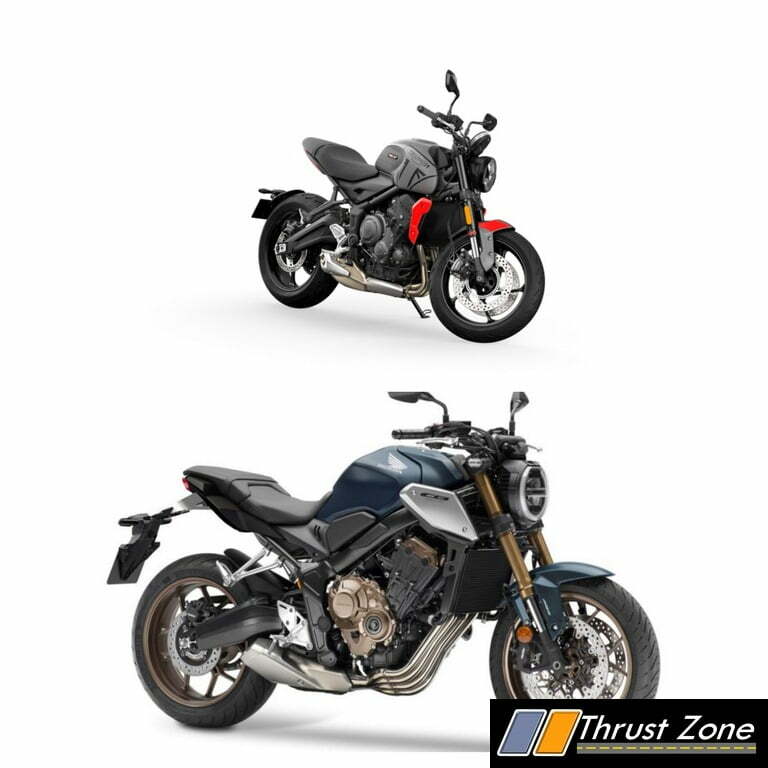 By unveiling Trident naked motorcycle, Triumph has thrown down the gauntlet in the mid-size segment of Indian bike market. On its launch, the Trident will give a direct competition to the Honda CB650R. We put these two contenders against each other in this spec-comparison review to know which one of these two makes more sense for buyers:

Despite being lower in displacement, Honda’s engine offers a substantially superior power of 86.17PS and that too at highish 12,000 rpm. The torque output, however, of both bikes is almost similar with Triumph churning 64Nm compared to 63Nm of CB650R. The thing that favours Trident is its less weight and flexible torque delivery that is available for a wider band of rev-range. Both bikes have a 6-speed gearbox and an almost similar compression ratio.

Suspension, Tires and Braking
For offering a sharper riding experience, Trident comes with a lightweight frame and a tighter rake angle. CB650R is not as sharp around the edges though it makes up for the loss with more space and room on offer. The brake setup is similar in both bikes though Trident should offer better-stopping performance given its low curb-weight and light frame. The size of the tires (both front and rear) is also the same on both the bikes.

Dimensions
Honda features a lengthier wheelbase and that should help the bike to have more stability at higher speeds. It also comes with a bigger fuel tank which equips it with a longer range in this comparison. However, the shorter height and low weight of the Trident should make it more convenient for short riders.

Features& Equipment
On the feature front, Trident wins hands down as it offers the convenience of Bluetooth connectivity which is not available in the Honda. Riders can manage the calls, access the navigation on the screen, and even handle GoPro operations on the left switchgear. Triumph has also equipped Trident with two riding modes which puts it far ahead of the Honda. Switchable traction control is available on both bikes. 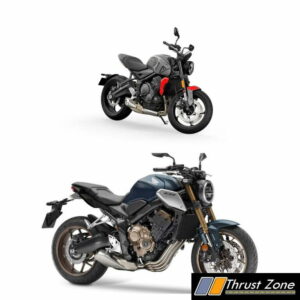 Price and value for money
Rs 8.67 lakhs for the Honda CB650R is not exactly value for money because Triumph has the pricing spot-on for the bike which is at Rs.6.95 lakhs. Considering the Triumph is fully loaded with a lot of features, is lighter and also has a triple, unlike most Honda rivals, which have had twin-cylinders, Trident is the pick of the lot here on paper, but only riding them will help us make the perfect verdict for you, so stay tuned.

Audi A6 e-Tron Concept – The Next E-volution Is Worth The Wait!