2022 Skoda Fabia Revealed With More of Everything! 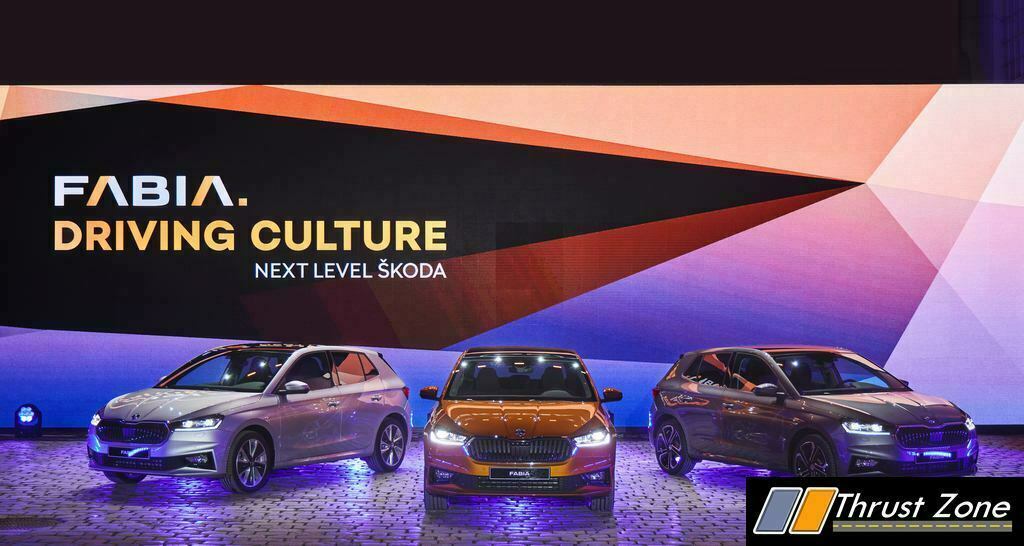 The new FABIA is a genuine all-rounder that remains true to its forerunners’ tradition. “The FABIA has been an integral part of our portfolio for over 20 years and embodies the core values of our brand like no other model. The latest generation has everything it takes to seamlessly build on the success of its predecessors. It offers more space than its competitors, perfect connectivity, advanced assistance systems and an emotive design – in other words, all you need, and a little more,“ says ŠKODA CEO Thomas Schäfer, summarising the new car’s evolution.

This evolution has been enabled by the MQB-AO platform the FABIA is using for the first time. The platform itself is an outstanding foundation that let ŠKODA engineers deploy state-of-the-art technical solutions. As a result, the FABIA boasts both a large interior and practical design with excellent dynamics and the best aerodynamics in its segment (drag coefficient cw = 0.28).

Its length and width have increased but not its height, giving the FABIA a more dynamic appearance. “With the fourth-generation FABIA, we have taken the next step in our brand-typical, emotive design language. Thanks to its new proportions, our entry-level model looks much more dynamic and grown-up. At the same time, the new FABIA embodies a modern lifestyle at first glance. We have deliberately not changed the essence of the FABIA: as is typical of a ŠKODA, it is a functional and practical everyday companion,” remarks SKODA chief designer Oliver Stefani. 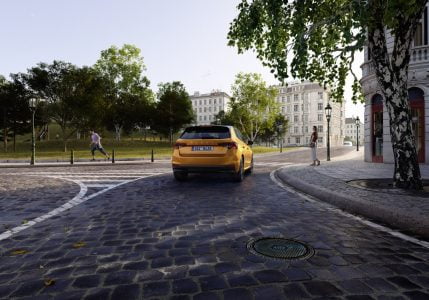 The car’s dynamic looks are accented by a number of new design details. The FABIA has been given strong lines, and the triangular shape on the front doors is a nod to the wedge segment of the Czech national flag. The car has ŠKODA’s typical crystalline elements, such as the chiselled front lights, which come with LED technology as standard. And a first for the FABIA is the option of state-of-the-art Full LED lights at both front and rear.

The effort to perfect the car’s aerodynamics contributed to its dynamic looks: muscular proportions often help achieve better drag parameters, but sometimes the devil is in the detail. In this regard it’s worth mentioning the bigger and elongated rear spoiler which, incidentally, is uniquely constructed from a single piece of material. The spoiler helps channel the airflow behind the car and substantially reduces air resistance. The new, optimised wheels also help improve the car’s ability to slice through air. The basic option on the FABIA is 14” or 15” steel wheels, but up to 18” rims are available as an option. In the Proxima and Procyon designs the rims have special plastic fills that both enhance the design and help control airflow around the wheels. 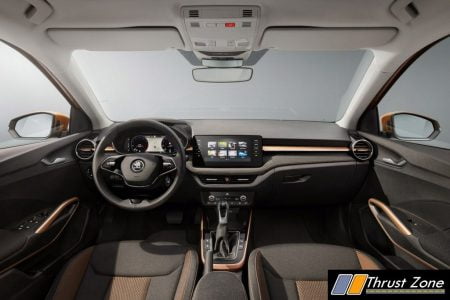 As far as the car’s dimensions are concerned, its length has grown by 111 millimetres compared to the previous generation to reach 4,108 millimetres, and it has grown 48 millimetres wider (1,780 mm). The wheelbase has been extended to 2,564 millimetres, 94 more than its predecessor. What’s more, the wheelbase on the new FABIA is now longer than the first-generation ŠKODA OCTAVIA’s. These numbers mean that the new FABIA is considerably more spacious than the previous versions, with more room for both occupants and their luggage. The boot has been enlarged by 50 litres to reach a segment-topping 380 litres; and folding down the rear seats gives a total of 1,190 litres of practical space.

The bigger, roomier interior is now also quieter thanks to improved sound insulation, while new materials and design features usually found in higher-segment cars (such as ambient lighting or contrasting upholstery stitching) and the FABIA’s updated technologies make the in-car experience even better. For the first time ever, the FABIA offers its occupants two-zone air-conditioning and air-con outlets on the rear of the centre console for passengers in the back. Other new options available to FABIA buyers for the first time are a heated steering wheel (either two-spoke or the sporty three-spoke steering wheel) and a heated windscreen.

The new FABIA has also been given a modern infotainment system with an always-online connection and numerous ŠKODA Connect services. The basic infotainment system is called Swing and comes with a 6.5” touchscreen display and DAB radio; the more advanced Bolero has an 8” display, Bluetooth connectivity and smartphone connection for the use of Wireless SmartLink, Android Auto and Apple CarPlay. Another option is PhoneBox, which lets you wirelessly charge your mobile phone. The top-of-the-range infotainment system is Amundsen, which has a 9.2” touchscreen display, gesture control and voice control via Laura, the voice assistance system that speaks fifteen languages. You can even opt for the Virtual Cockpit digital instrument panel with the new FABIA. 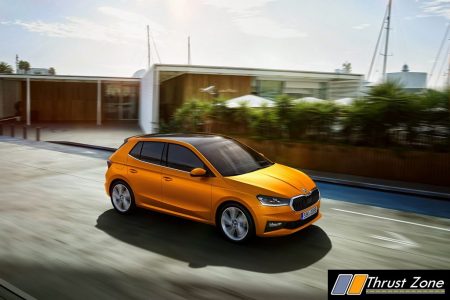 Of course, the FABIA has an abundance of safety equipment that has helped the model to a five-star rating in Euro NCAP tests. It can have up to nine airbags and offers, for the first time in the model’s history, Travel Assist, Park Assist and other assistance systems. These include adaptive cruise control, Lane Assist to make sure you don’t stray out of your lane and Side Assist to warn drivers of cars in their blind spot or approaching from behind at high speed.

The new FABIA also excels in terms of Simply Clever features. Five of these are brand new for ŠKODA, while eight more have been borrowed from other models for the first time; in total there are 43 Simply Clever features. That’s a record for the FABIA. But don’t worry, old favourites like the ice scraper in the fuel tank cap and parking ticket holder on the A-pillar are still there.

The five new Simply Clever features mainly help make better use of space inside the car. Details like the parking card or payment card holder and elastic penholder help keep the car’s interior neat and tidy, while the new (optional) removable drink holder provides convenience and flexibility. Backseat passengers can make use of a new (again, optional) storage box that fits between the centre tunnel and rear seats. Plus there is a system for keeping the luggage compartment tidier and an optional sunshade for the sunroof. When it’s not in use, it can be stored away under the floor of the luggage compartment. 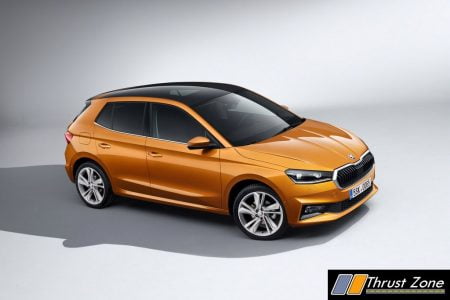 The sunroof itself is an innovative and clever design solution that enhances the sense of airiness inside the car. The new technology stops the interior from getting too hot, and it does that without blinds or opening mechanisms that intrude on the space above passengers’ heads.

Simply Clever features the FABIA has borrowed from other ŠKODA models include the bag beneath the luggage compartment floor that can be used for storing clothes, for example (it can take up to 3.5 kilograms); practical phone pockets on the back of the front seats; a USB-C connector on the interior rear-view mirror (optional; can be used to connect a dash cam); or the foldable front passenger seat that lets you transport long items.

The new FABIA will let customers choose between five modern powertrains. “All engines used in the new FABIA come from the EVO generation. They are even more efficient than their predecessors. We managed to make both of the MPI engines, which we developed for the entire Volkswagen Group and produce in the Czech Republic, more powerful by 4 kW, while reducing their fuel consumption and emissions,” says Johannes Neft, ŠKODA board director responsible for technical development.

Four of the powertrains feature one-litre, three-cylinder engines, two of them are the MPI naturally aspirated engines Johannes Neft mentioned. The basic MPI engine has a power output of 48 kW, while its more powerful brother delivers 59 kW. The 1.0 TSI engines deliver 70 and 95 kW. The standard transmission is a manual gearbox. Only the most powerful three-cylinder engine has a six-speed gearbox or the optional seven-speed DSG automatic transmission. That DSG automatic transmission comes as standard with the model’s most powerful engine, the four-cylinder 1.5 TSI giving 110 kW and offering cylinder deactivation for reducing fuel consumption. 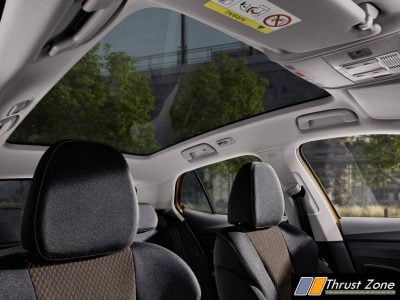 While we’re on the subject, the new FABIA has pushed down fuel consumption (and with it CO2 emissions) to the lowest technically possible level. That is aided by the fact that despite the increase in the car’s size its weight has remained practically the same (thanks to super-strength steel used in its construction). The new flaps in front of the radiator grille, which can be closed to improve airflow when the car is not being made to work hard, deliver a saving of 0.2 litres of fuel per 100 kilometres at a speed of 120 km/h, for example.