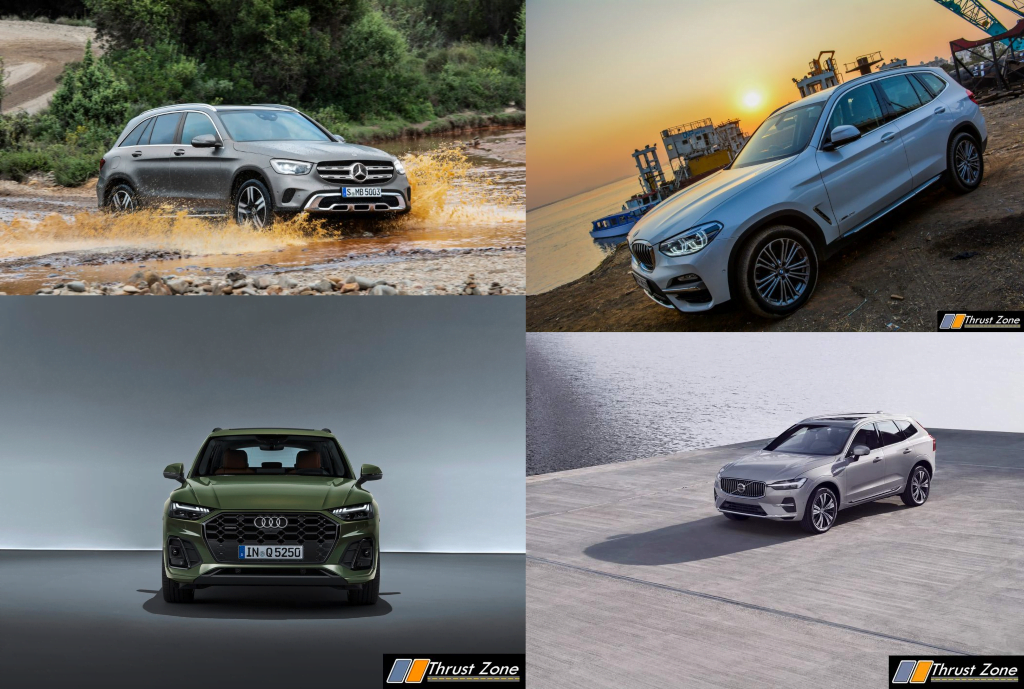 2021 Audi Q5 comes equipped with a host of new features along with the new petrol engine under the hood. Unlike the previous version, it has now got the 2.0-litre turbocharged gasoline motor and while the interiors haven’t received any significant changes, the touch screen infotainment system is new and so is the Bang and Olufsen sound system with the support of a 19-speaker. We pit the new Audi Q5 against its established rivals BMW X3, Mercedes Benz GLC, and Volvo XC60 to find out which one of these comes out on top:

2021 Audi Q5 remains identical to its predecessor in terms of dimensional parity although stretching 4682mm between head to toe, it is shorter than Volvo XC60 and BMW X3. However, it dwarfs the Mercedes-Benz GLC in length though on the crucial aspect of the wheelbase, it’s shortest among the lot. Audi Q5’s cabin is widest while BMW X3 comes a close second with only 2mm difference between the two. Mercedes GLC stacks at last spot with 2096 mm wide cabin. In terms of height, BMW X3 is the tallest one followed by Audi Q5. Mercedes GLC triumphs over others in the department of wheelbase which should translate into better cabin space for documents. Boot space is identical in all three German offerings pegged at 550 liters while Volvo features the smaller 505-liter of luggage space. All SUVs boast 19” alloy wheels though in BMW X3, these are standard part of the equipment only in the Luxury Line Variant of the SUV. 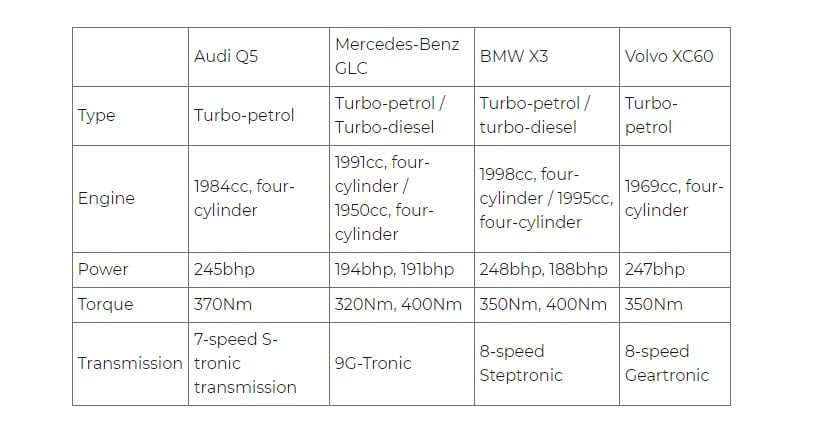 Engine and Transmission
Audi Q5 comes with a brand new 2.0-liter TFSI turbocharged petrol engine capable of putting out 245bhp and 370Nm. The power is channelized to all four wheels through quattro system with the help of seven-speed Dual-clutch transmission system. There is no diesel engine on offer, unlike the BMW and Mercedes which offer both petrol and diesel motors to customers.

BMW X3 comes with 248bhp and 350Nm of petrol might while in diesel avatar, the SUV dishes out 188bhp and 400Nm torque. xDrive AWD is standard on all variants of X3 channelizing the power to all four wheels through 8-speed auto gearbox. Mercedes GLC with 194bhp and 320Nm on tap in petrol guise pales into insignificance though the diesel-powered variant with 191bhp and 400Nm make for a decent output. The power is transmitted to the wheels with the help of nine-speed gearbox and although 4MATIC AWD system is available in the GLC but it’s only in diesel avatar. XC60 with its 48V mild-hybrid system produces a combined output of 247bhp and 350Nm of torque and like Audi, there’s no diesel variant on offer here. The XC60 comes with all-wheel-drive system and features 8-speed automatic gearbox.

Mercedes-Benz GLC gets 12.3” digital instrument cluster and the 10.25” infotainment system with support for Google Home and Alexa being the star attraction of the cabin. Besides, the GLC comes with voice recognition feature, Burmester sound system, three-zone automatic climate control, 360-degree camera, wireless charging system, and panoramic sunroof.
Volvo XC60 gets front massaging seats, 360-degree camera, Bowers and Wilkins audio system, adaptive cruise control, Volvo car apps, 9” portrait screen, Google assistant, and advanced air cleaning system. The app is capable of receiving over the air updates to notify owners on number of important parameters such as scheduled service, status of the charging, and display of the current quality of air. In addition, Volvo has equipped XC60 with Blind Spot Information System, steer-assist, and radar-based safety technology among others.

Price Comparison
With a price stretching between Rs 58.9 – 63.7 lakh, Audi Q5 is on par with BMW and Mercedes. While BMW X3 starts at Rs 57.9 lakh, Mercedes GLC costs Rs 58.5 lakh for petrol variants. Volvo is the costliest of the lot with its fully-loaded variant demanding Rs 61.9 lakh from prospective buyers. Mercedes comes across as the most value-imbibed proposition as it costs around Rs 5 lakh less than the Audi Q5 in petrol guise. The diesel variant of BMW X3 and Mercedes GLC are priced similar at Rs 64.9 lakh and Rs 64.3 lakh respectively. In sum, 2021 Audi Q5 comes with a lot of changes though it’s just on par with other rival offerings and have almost nothing special to boast and brag about.