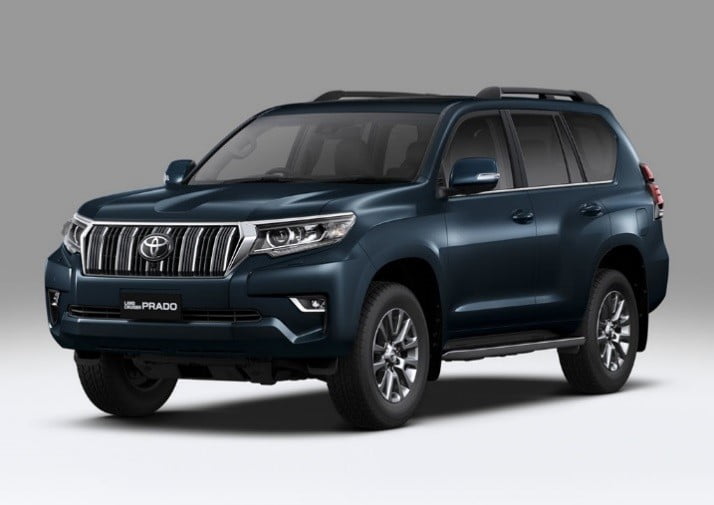 Let’s have a look at the cosmetic changes done to the new Prado. Aesthetically, at the front, this SUV gets a new design grille, a beefy hood, LED headlamps and a new design front bumper. Moving to the side profile, Toyota has added some bling to the Prado with the new chrome windows. Along with this it also gets puddle lamps on the wing mirrors and new design alloy wheels. At the rear, there aren’t many changes except for the new number plate garnish, LED tail lights and new design rear bumper. Apart from the existing paint schemes, the new Land Cruiser Prado gets three new shades: Blackish Ageha, Avant-Garde Bronze and Vintage Brown Pearl.

Let’s, step in and have a look at what the New Prado gets. The updated land Cruiser Prado gets new seats with different upholstery and it now comes equipped with heating and cooling ventilation. The New Prado now gets an illuminated entry system for both the front and rear passengers. In addition to this, the Prado gets a new design centre console, new speedometer, painted door handles and new steering wheel.

That’s all for the interiors lets pop up the hood and have a look at what powers this beast. Powering the Land Cruiser Prado is a D-4D diesel engine that churns out 140 bhp of power and 410 Nm of torque. This diesel mill is coupled with a five-speed automatic gearbox which powers the four wheels of this SUV via a 4WD system. The updated Prado is now offered with off-road features such as crawl function, Multi-Terrain Select and a Multi-Terrain Monitor with four camera surround check.

Talking about the safety features, there aren’t many changes and the Prado is continued to be equipped with ABS with EBD, Brake Assist, Seven SRS Airbags (Driver, Passenger, Driver & Passenger Side, Driver Knee, Curtain Side Airbag), Whiplash Injury Lessening, Vehicle Stability Control, Tyre Pressure Monitoring System and an Angle sensor in Intrusion sensor.