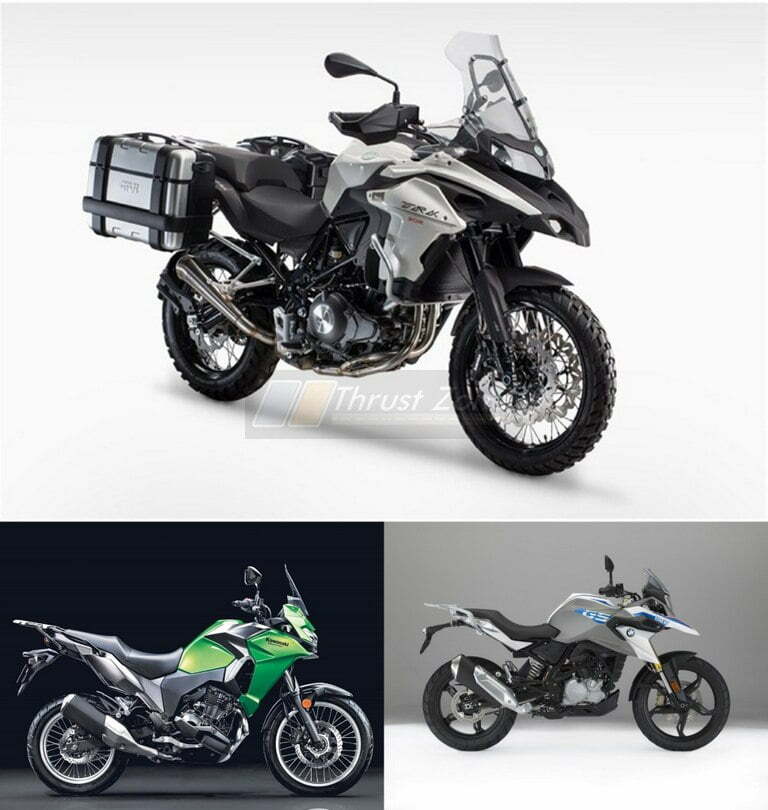 Upfront, only the GS 310 is offered with an all digital instrument cluster, whereas both the Versys-X 300 and the TRK 502 get a semi digital instrument cluster. Only the TRK 502 comes with an LED DRL along with a twin halogen setup lamp, whereas Kawasaki has provided the Versys-X 300 with LED fog lamps mounted on the crash bar. Both the Versys X 300 and the TRK 502 come equipped with engine bash plate and knuckle guards, while the 301 GS only gets a plastic sump guard. In addition to this, the Versys X 300 is the only bike in the competition which gets saddle bags as standard.

In terms of the safety kit, to meet te new safety norms all of the three bikes come loaded with dual channel ABS unit. From which only the BMW 310 GS is offered with a switchable ABS unit, on the other hand,only the rear ABS of the Benelli TRK 502 can be disengaged. While Kawasaki doesnt offer the Versys-X 300 with disengageable ABS unit but does come equipped with slipper assist clutch. 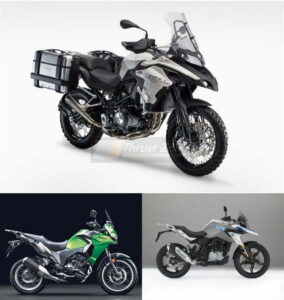 Both the Benelli TRK 502 and TRK 502X are powered with a 499cc parallel twin cylinder engine that produces 47 bhp of power at 8500 rpm and 46Nm of twist. Although it is the bike with the biggest displacement it also is the heaviest of them all with a kerb weight of 235kg. Moving towards the Versys-X 300, Kawasaki powers the adv bike with a 296cc parallel-twin engine which churns out 39 bhp of power and 25Nm of torque. This gives the TRK 502 a tough competition and if we compare the weight the Versys X 300 is a bit lighter as it weighs 184 kg which gives it an added advantage. 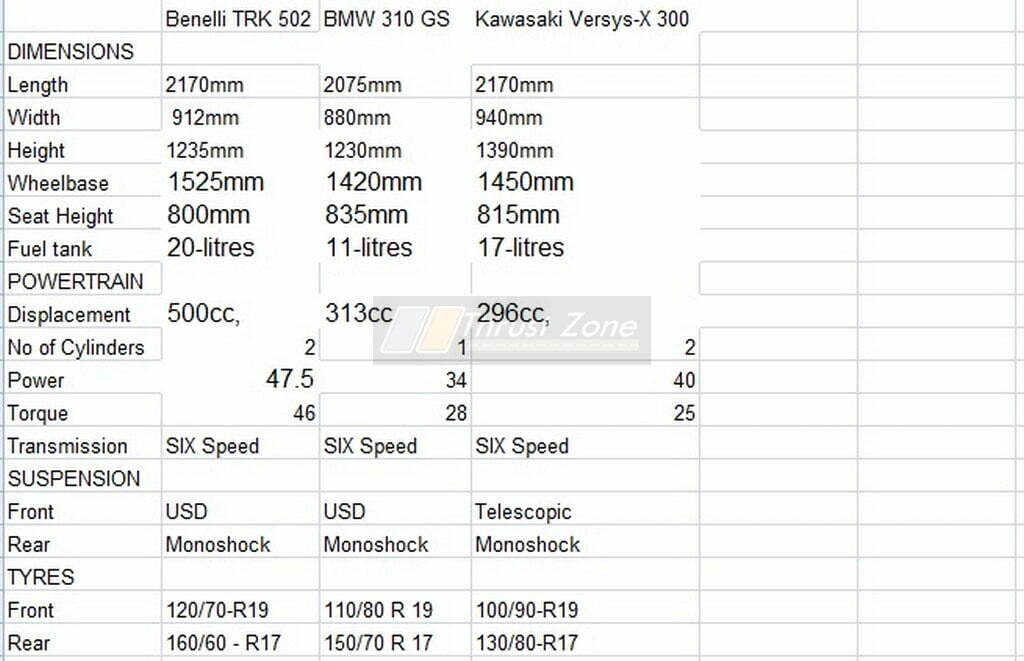 The GS 310 from BMW is the only bike in the competition to powered with a single cylinder engine and the cubic capacity is also the smallest as it is powered with a 313cc liquid cooled engine generating 34 bhp of power and 28 Nm of twist. The BMW 310GS does lack in power figures in the competition but it is the lightest off all as it weighs only 169.5 kg. In terms of transmission, all of the bikes in this comparison come coupled with a six speed gearbox.

All of the bikes in the comparison are proper adventure tourers and they are expected to be munching miles. Hence they do get bigger fuel tanks, the TRK 502 gets a 20 litre furl tank which is the largest of all, whereas the Versys X 300 gets a 17 litre tank the BMW offers the 310 GS with an 11- litre tank. In terms of suspension, the duties are taken care by a 50mm USD fork and a pre-load adjustable Monoshock unit for the Benelli TRK 502, whereas the TRK 502 X (off road version) gets an additional increase in ground clearance measuring 220mm and seat height increase of 840mm. Just like the TRK 502, even the GS 310 from BMW comes equipped with a 41mm USD fork and preload adjustable monoshock unit. Here, only the Versys X 300 gets telescopic front forks and just like the others it gets an preload adjustable monoshock unit for the rear.

Both the Versys X 300 and the TRK 502 gets spoke wheels with similar wheel sizes of 19 inch wheel at the front and 17 inch wheel at the rear. The only difference between both is that the TRK 502 gets Metzeler Tourance tyres, while the Versys X 300 gets IRC Trail Winner tyres. Unlike the two, the BMW 310 GS misses out on spoke wheels at it gets alloy wheels instead, the wheel size is also similar, 19 inch at the front, while the rear get 17 inches unit. BMW provides the 310GS with dual purpose tyres and it also offers a decent seat height of 835mm.

On paper, the BMW 310 GS is the cheapest of them all, with a price tag of Rs 3.49 lakh but it does misses out on many features. Just like the Versys X 300 priced at Rs 4.69 lakh it is priced very high. So we can say that the Benelli TRK 502 and TRK 502X gets you the bang for the buck as it gets many good features along with a powerful engine in the 5 to 6 lakh price range.

Homage to ten years of the V10 engine: the Audi R8 V10 Decennium