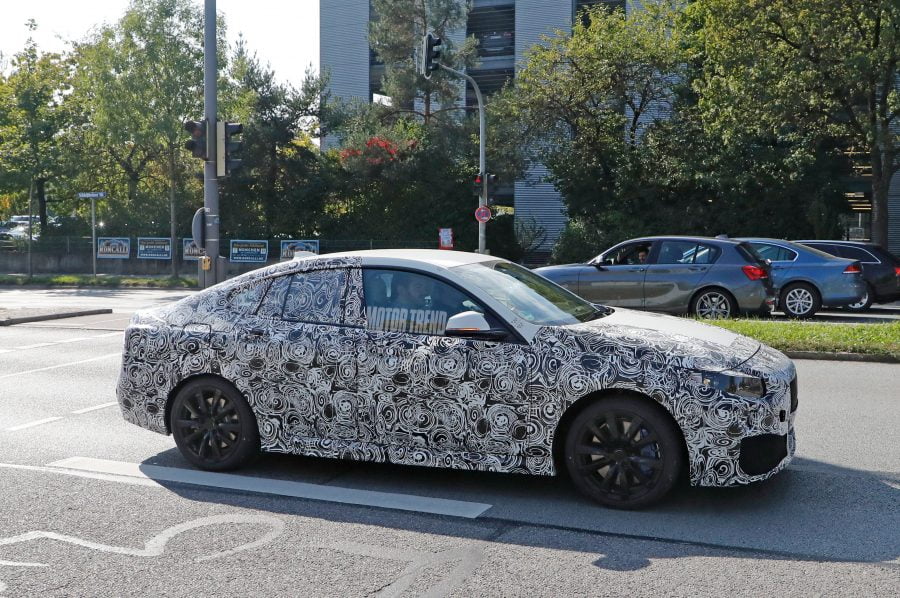 After the debut of the 6 Series Gran coupe and 4 Series Coupe, BMW is now moving towards testing the all new 2 series Gran Coupe. Compared to the larger 4 Series and 6 Series Gran Coupe models, the 2 Series Gran Coupe has shorter front and rear overhangs and the car now appears more upended. A prototype has been spotted testing on public roads and it looks like the 2 series Gran Coup is directly aiming at the Mercedes Benz CLA-Class for rivalry. The car was spied in Germany and is based on the new generation 2 series platform.

The 2 series Gran Coupe looks a bit more practical than the current generation 2 series Coupe and Covertible. The newer generation model will likely have a rear hatch. The prototype that was recently spotted appear to be an M Sport variant as the latest model was witnessed with blue brake calipers and a lower front fascia with larger air intakes upfront. The car is about the same length as the the current 2 series Gran Tourer hatchback.

The all new BMW 2 Series Gran Coupe is said to be a front wheel drive car, with an option for BMW’s xDrive all-wheel drive system. The BMW 2 Series Gran Coupe has been heavily covered with camouflage and stick-on material which helps in hiding the details of the car in public. This 2 series model will sit between the global-market 1 series and the 3 series in size. The two clues we get about the Coupe’s overall styling and shape comes at the rear with dual exit exhaust and a small ducktail spoiler crawling out of the camouflaged trunk.

Thus far, it is not clear whether the BMW 2 Series Gran Coupe will be based on the same underpinnings as the outgoing Coupe and Convertible. The two clues spotted give us a clear hint of the Gran Coupe being quite sporty and snazzy. The 2 series Gran Coupe will apparently debut next year, and production of the 2 series derivative will likely begin tin early 2019 as a 2020 model year. The car is surely is India material and is most likely to make it as it can rival the Audi A3 and CLA class.