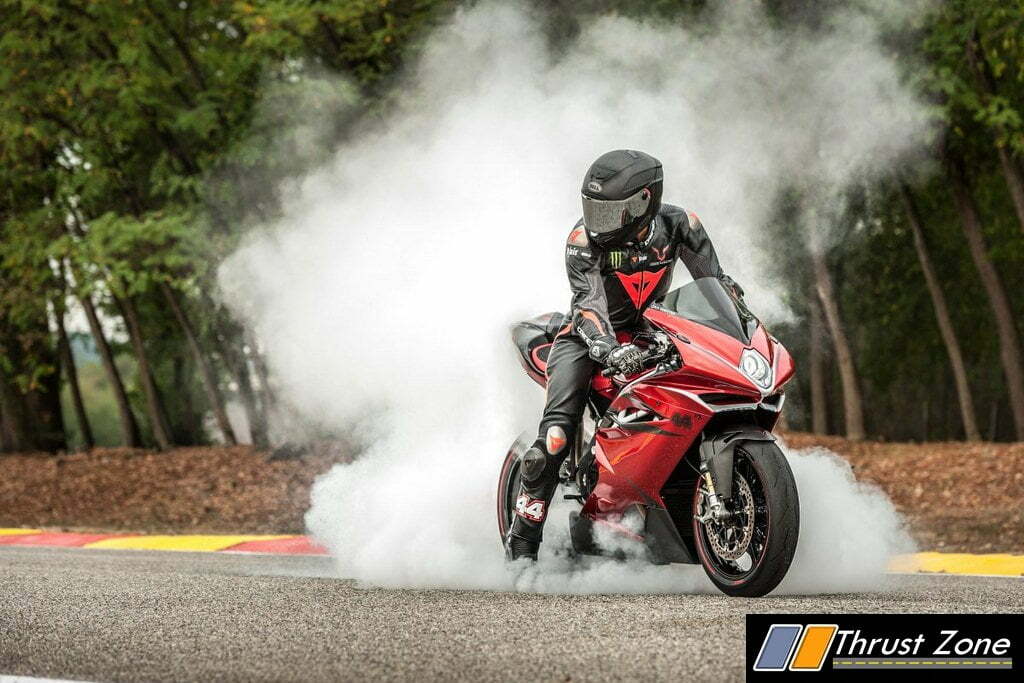 MV Agusta has launched a new special edition of their F4 RC superbike, labeled as the F4 LH44. The LH44 stands for Lewis Hamilton edition. Yes you heard it right Lewis Hamilton the very popular and beloved 3 times Formula One world champion has collaborated with Team MV Agusta and this super good looking machine is the outcome of their collaboration. There will be only 44 units of the MV Agusta LH44 on sale. This is the second time that Lewis Hamilton and Agusta have come together to recreate a model after the Dragster RR LH44.

The MV Agusta F4 LH44 special edition is basically based on the standard F4. Your best just got better, to make the special edition MV Agusta F4 LH44 look more apparent than its kin, there is a whole new stunning Candy Red paint scheme on the bike, smoked out windscreen (which is done for the very first time on a F4 production model) and the engine block is all blackened along with alacantara seat and a lightweight fibre fairing. Extensive use of carbon fibre and titanium has helped the MV Agusta F4 LH44 to get more sporty with reducing a lot of weight and gaining more speed ,yes time for shattering lap records.

The special edition MV Agusta F4 LH44 has not only been updated cosmetically but also mechanically. The superbike has been assisted with fully adjustable Ohlins USD NIX 30 tin coated forks upfront along with Ohlins TTX 36 monoshock at the rear with Brembo brakes. The conventional four pipe exhaust system has been recouped with titanium under-seat set up. At the heart of the new beast is the Corsa Corta engine, which puts out 202 bhp in its stock form. After all this is a limited edition and has to have some thing special than the stock version, so keeping that in mind the MV Agusta F4 LH44 gets a performance boost, thanks to the titanium exhaust and a single-hearted control unit, which helps in boosting the power output by 7 bhp bringing it to 209 bhp.

The MV Agusta F4 LH44 has also been fitted with specially designed Pirelli Diablo Supercorsa SP tyres having 120/70 ZR at the front and 200/55 ZR 17 at the rear specially designed by Pirelli for the 44 editions of the Lewis Hamilton version. The Italian rubber has the LH44 lettering on its sidewalls making it look more impressive. As mentioned above the Superbike is limited to 44 units only. Though the pricing has not been confirmed yet, we expect the super machine to cost quite a fortune. With just 44 units on offer, there are no sights of this limited edition MV Agusta F4 LH44 model coming to the Indian soil, unless anyone thinks of buying it here.