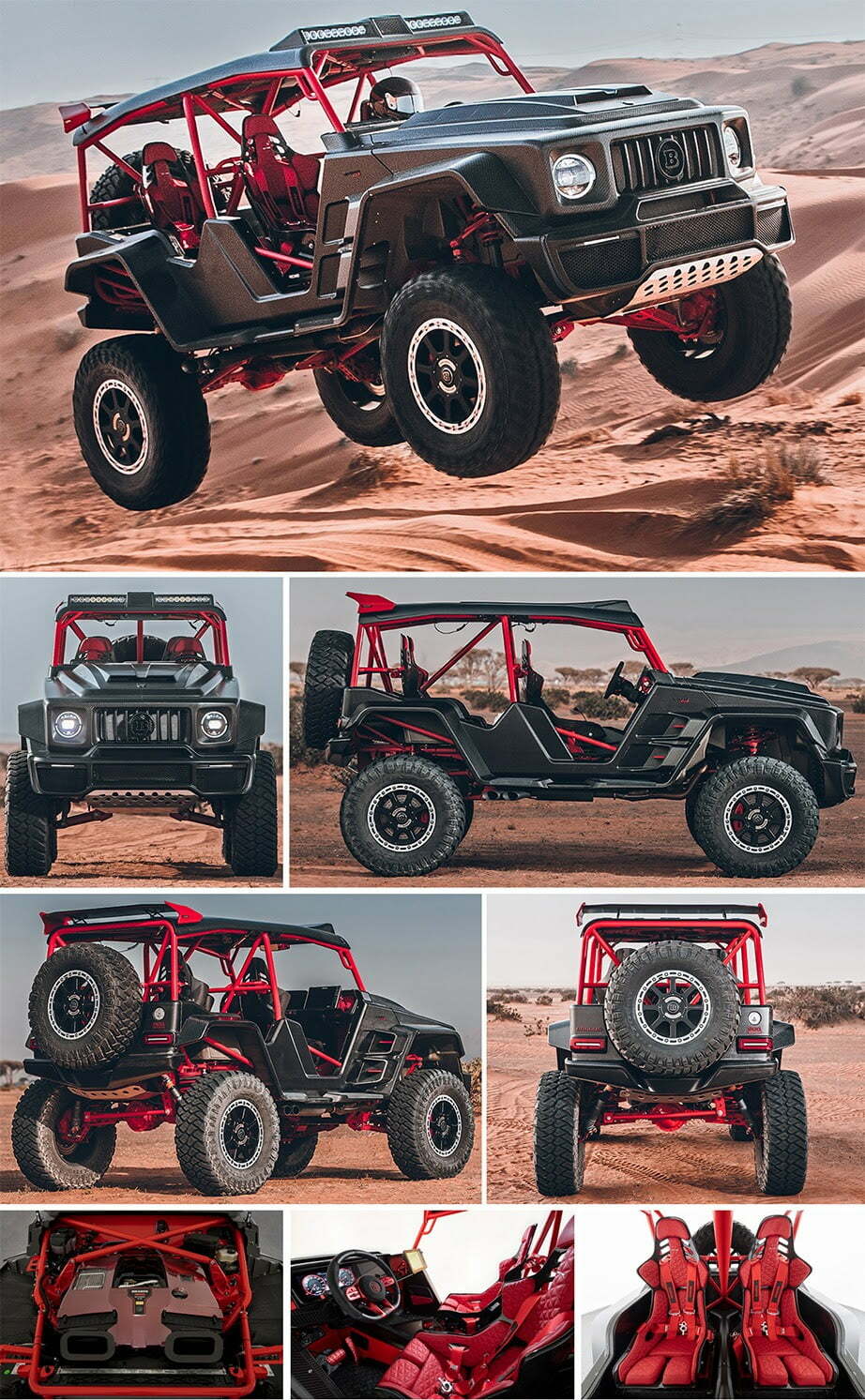 The CRAWLER is designed as an uncompromising fun car for use far off paved roads and thus is not street legal. The new BRABUS supercar will be built in a limited edition of just 15 vehicles, which will be delivered to customers over the next three years.

In conjunction with permanent all-wheel drive and a nine-speed transmission, whose gears can be shifted either automatically or manually with the paddle shifters on the steering wheel, the powerful vehicle weighing 2,065 kilograms (4,553 lbs.) catapults itself from rest to 100 km/h (62 mph) in just 3.4 seconds. Due to the heavy-duty off-road tires, the top speed is electronically limited to 160 km/h (100 mph).

The chassis of the BRABUS 900 CRAWLER consists of a tubular frame made from high-strength steel and painted the distinctive BRABUS Red. Portal axles at the front and rear give the off-roading supercar a ground clearance of 53 centimeters (20.9 in). BRABUS also developed the matching height-adjustable special struts with adjustable damping, which provide up to 160 millimeters (6.3 in) of spring travel and thus are also suited for use in extreme terrain.

The tires of the BRABUS 900 CRAWLER also fit its theater of operations: The BRABUS Monoblock HD forged wheels are mounted with 40 x 13.50 R 20 off-road tires.

The buggy-style body of the BRABUS 900 CRAWLER and the roof primarily designed to provide shade are both produced from high-strength exposed carbon. The underbody panels are made of aluminum and a tough carbon/Kevlar composite material.

The BRABUS CRAWLER interior is crafted in the upholstery shop of BRABUS (Brabus-Allee, D-46240 Bottrop, phone + 49 / (0) 2041 / 777-0, fax + 49 / (0) 2041 / 777 111, Internet www.brabus.com). To provide contrast to the dominant carbon, the seat padding of the four racing seats was covered with bright red Silvertex fabric, which is extremely resistant to environmental influences such as sun, dust and water. It was adopted from the BRABUS Marine high-performance boats. In addition, the exclusive cockpit features a modern intercom system for driver and passengers, as well as a GPS-based off-road navigation system as it is also used in desert rallies.

BRABUS was founded in 1977 by Bodo Buschmann and celebrates its 45th anniversary in 2022. For the occasion, the engineers, technicians and designers of the German high-end company developed their first supercar with proprietary chassis and buggy-style, four-seater body made from high-strength exposed carbon. The development goal was to build the ultimate racer for having terrific fun driving in desert dunes. To achieve this goal without compromises, they designed the BRABUS 900 CRAW`LER, an exclusive high-performance off-roader that is not street legal.

To give this supercar the kind of outstanding rigidity that can effortlessly handle even the toughest off-road driving, a special tubular frame was designed using state-of-the-art CAD technology. The chassis with integral safety cell is manufactured from high-strength steel and then painted bright BRABUS Red.

The suspension mounts of this chassis are designed for maximum strength and accommodate the portal axles at the front and rear, which were designed specifically for this supercar. This type of design raises the position of the engine, transmission, differentials and half-shafts, which requires engineering special wheel ends with integral portal gearbox to compensate for this height difference in driving the wheels. All special components required for this are milled from solid pieces of high-strength aluminum. This includes the wheel ends, all control arms, the integral subframe of the independent suspension on the front axle and the axle housing of the beam axle at the rear. This complex design enabled the BRABUS chassis developers to achieve a maximum ground clearance of 53 centimeters (20.9 in), which is extremely advantageous when operating in rough terrain.

In addition, the company developed particularly robust, tailor-made BRABUS aluminum struts specifically for this chassis. The shock absorbers are four-way adjustable: for high and low speed and in twelve clicks each for compression and rebound.

Of course, the huge tires with off-road tread pattern also play a role in the tremendous ground clearance of the BRABUS 900 CRAWLER. The tires of size 40 x 13.50 R 20 are mounted on BRABUS Monoblock HD “PLATINUM EDITION” forged wheels of size 9.5Jx20 front and back. For the enormous loads generated in tough off-road operations, the wheels are manufactured with an eight-hole bolt pattern to match the BRABUS portal axles. A fifth, identical complete wheel is mounted as a spare at the rear in the event of potential tire damage.

Extra-wide front and rear wheel arches suitable for the king-sized tires were integrated into the exposed-carbon bodywork. As a logical high-end interpretation of a dune buggy, the body bolted to the BRABUS 900 CRAWLER’s tubular frame has neither doors nor any windows. Instead, a carbon-fiber roof panel that protects against the sun covers the steel safety cell, which is designed as a roll cage. The BRABUS rear wing adds a decidedly sporty touch at the rear end of the roof. But the roof skin of the CRAWLER provides not only shade for the crew, it also features integrated air ducts and vents for the riders in the rear seats. Two powerful LED panels are integrated in the roof skin at the front to the left and right of the central air intake. In the dark, they help the main headlights to light up the terrain ahead of the supercar bright as day.

The front was designed to provide the radiators with as much fresh air as possible for driving in hot deserts. To this end, the carbon outfit has large air intakes. The stainless skid plate integrated into the front fascia protects the main components from perilous contact with the terrain. The skid plate under the rear end performs the identical task. The quick-release fastener for the 100-liter (26.4 gal.) safety fuel tank is integrated at the right rear.

The wide carbon rocker panels on both sides of the vehicle are sufficiently sturdy to serve as entrance aids. Another special visual feature of the BRABUS 900 CRAWLER is the hood. It has two air intakes at the front and also efficiently vents the air heated by the engine from the engine bay through outlets integrated at the sides.

Of course, when it comes to powering the first supercar built entirely in-house, the only option worth considering is the most powerful engine in the broad engine range of the Bottrop-based company, which is accredited as a vehicle manufacturer with the German Federal Motor Transport Authority.

Eight cylinders, two turbochargers, and a displacement of 4.5 liters – these are the key data of the BRABUS 900 ROCKET V8 twin-turbo, increased-displacement engine that powers the CRAWLER. The engine is a masterpiece of engineering with select hi-tech components. They include forged pistons with a diameter of 84 millimeters (3.3 in), precision-balanced special piston rods and a special billet crankshaft with a stroke of 100 millimeters (3.9 in).

The elements of the forced induction system are just as select. The two special BRABUS turbochargers produce a maximum boost pressure of 1.4 bar, while the two BRABUS BoostXtra valves generate a thrilling blow-off noise when the driver lifts off the gas. High-pressure fuel pumps and a ram-air intake system with special air filters supply the engine with fuel and combustion air. The engine is housed under an attractive and sporty BRABUS engine cover produced from red carbon fiber.

The BRABUS high-performance exhaust system on the outlet side captivates with its two matt black tailpipes side-exiting below the carbon rocker panels on either side of the vehicle in front of the rear wheels. Special downpipes with a diameter of 76 millimeters (3 in) and metal catalysts let the eight-cylinder breathe freely. The two BRABUS mufflers with actively controlled exhaust valves provide active sound management. The driver can choose between a throaty V8 sound and a subtle whisper in “Coming Home” mode at the touch of a button on the steering wheel.

The BRABUS powerplant engineers and electronics specialists precisely coordinated the interaction of the high-performance components. This result in flawless durability and tremendous power delivery. The engine of the BRABUS 900 CRAWLER produces 662 kW / 900 hp (888 bhp) at a low 6,200 rpm. The peak torque of 1,250 Nm (922 lb-ft) is just as exceptional. It is on tap at a low 2,900 rpm. This figure is limited electronically in the vehicle to 1,050 Nm (774 lb-ft). BRABUS recommends high-performance lubricants from MOTUL also for demanding desert operations.

The power is transferred to the permanent all-wheel-drive system that is equipped with electronically controlled locking differentials by a nine-speed transmission, whose gears are shifted with the BRABUS RACE paddle shifters on the ergonomic steering wheel. Automatic mode is alternatively available.

The explosive combination of 900 horsepower and all-wheel drive is reflected in tremendous acceleration. Despite a curb weight of more than two metric tons plus crew, the BRABUS 900 CRAWLER slings itself from rest to 100 km/h (62 mph) in a mere 3.4 seconds. Due to the off-road tires mounted for driving in the desert, the top speed is electronically limited to 160 km/h (100 mph).

The cockpit of the BRABUS supercar provides an experience of the fascination of this desert racer as pure as no other BRABUS supercar before. The driver plus a maximum of three passengers are strapped into the carbon racing seats of the BRABUS 900 CRAWLER with four-point seatbelts. The seats provide perfect support and outstanding comfort. They are covered in the BRABUS upholstery shop with bright red Silvertex fabric that matches the frame and some interior sections sporting that same color. This hi-tech fabric was adopted from the BRABUS Marine high-performance sport boats. However, what counts in a desert racer is not so much the imperviousness to water, but rather to sand. In addition, this material stands out due to its remarkable resistance to being bleached by the sun. Just as exceptional as this choice of material is the high-quality workmanship that goes into the quilting applied with pinpoint precision and the BRABUS logos embroidered on the head restraints.

The interior features red anodized parts such as the pedals and the driver footrest as well as elements such as the switches with red glazing to match the red highlights that BRABUS adds with the frame, the chassis components and the seat upholstery. The bracket for the GPS navigation system positioned in front of the co-driver sports that same color. BRABUS optionally also supplies individually compiled map data for the area where the particular CRAWLER buyer operates the vehicle.

The vehicle has an intercom system on board for communication among the individual crew members. It can be used with the four supplied BRABUS carbon helmets or with any other headsets.

The BRABUS 900 CRAWLER is built in a limited edition of just 15 vehicles. The first five of these supercars will be delivered this still year. Another five CRAWLERS will follow in 2023 and five more in 2024. €749,000 (export price excluding statutory VAT in Germany).