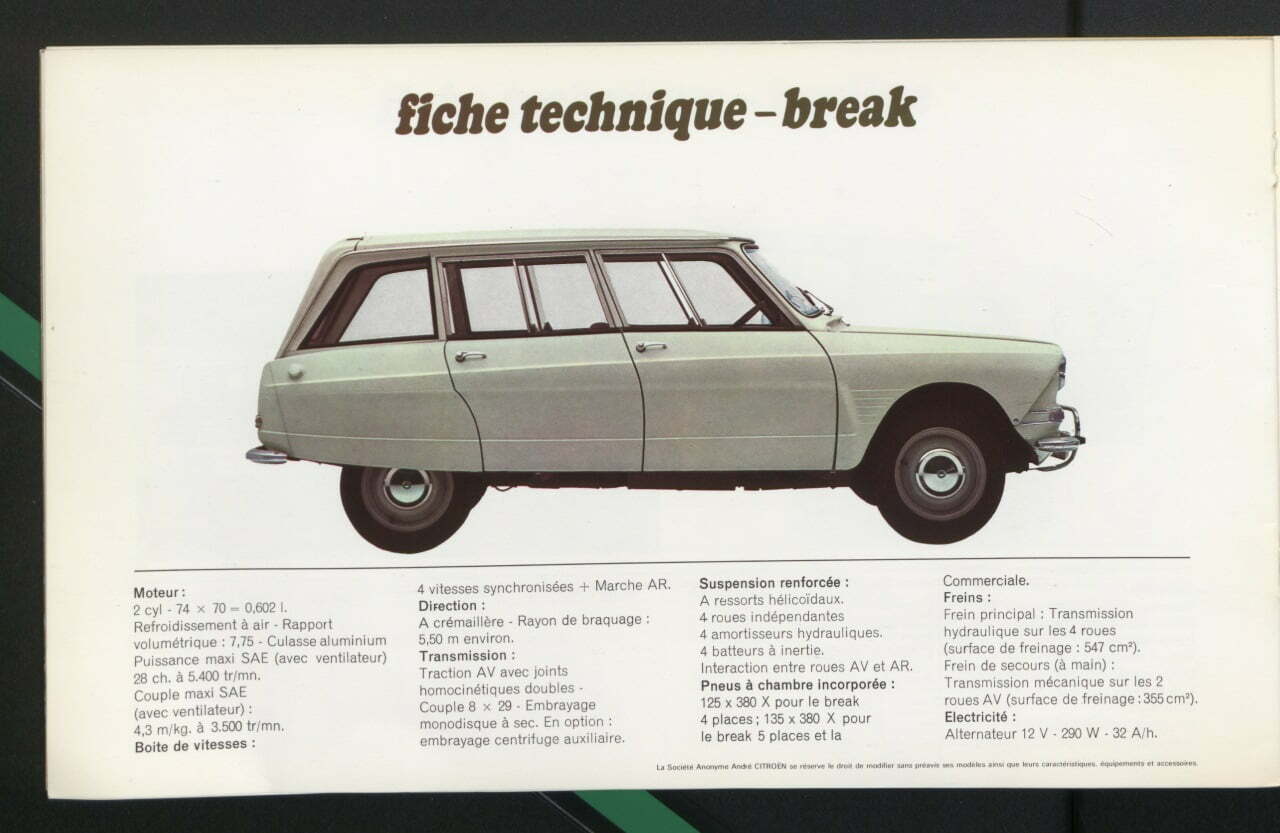 After designing the Traction Avant, the 2 CV and the DS with the Citroën design team, Flaminio Bertoni was asked to create the lines of a middle-range car, known as the AM Project. Ami 6 was the result of this; his masterpiece, as he confided to his friends and family. Since here, for the first time, the designer could express himself fully and alone without interference from anyone else imposing the style of the car.

For Ami 6, he had the bold idea of the inverted rear window which remains clear when it rains, also preserving a respectably-sized trunk with traditional opening, and spaciousness in the rear seats, while retaining reduced outer dimensions. The dual-cylinder 602 cm3 engine was extrapolated from that of the 2 CV, In addition to its front end with refined lines set with wide rectangular headlights (a first at that time), its bonnet sloping in the middle, its pagoda-style roof and sides highlighted with embossed lines, Ami 6 displayed a strong character, even a “baroque style” in the words of some observers! Ami 6 was not content with being just an aesthetic success. It was also innovative in terms of marketing, presenting itself in advertising documents as the “second vehicle ideal for the lady of the household”.

The interior of Ami 6 was inspired directly by that of the DS, a gold standard in the field. From its single-spoke steering wheel and door handles to its controls and seats, everything suggested top-of-the-range Citroën. In terms of road behaviour, everyone applauded the road handling and flexibility of the saloon, inherited from the famous suspensions of the 2 CV. From its creation, in keeping with the Citroën spirit, Ami 6 has been an original and innovative car. Its die-hard fans maintain a particular interest in the Club versions with four headlights and white side trim, sold from September 1967. 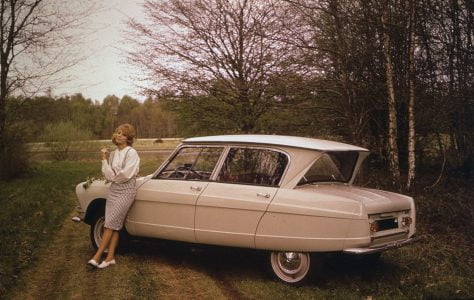 The iconic advertising slogan for Ami 6 remained “the least expensive comfort mile in the world”.

The turning point came in late 1964, with the arrival of a small station wagon (320 kg payload) designed by Henri Dargent (assistant to Flaminio Bertoni) and by Robert Opron (successor to Bertoni, who passed away in 1964). This station wagon would boost sales and overtake the saloon. This has been a very rare occurrence in automotive history.

More consensual, its line also offered considerable cargo volume for a leisure vehicle in this category, along with easy and convenient access. It was versatile and a family could take a trip in great comfort, but it was also suited to professional use for a mobile commercial operator or an artisan.

Production of the saloon ended in March 1969, six months before production of the estate ended, to make way for the new, less unusual Ami 8 with its rear window facing the “right” way. The latter gave way to the Visa in 1978. 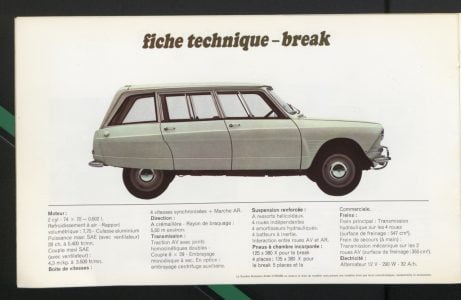 CITROËN AMI 6, DID YOU KNOW?

The name Ami 6 comes from a phonetic combination that refers to the name of the Design project (AM vehicle), the title “Miss”, and amici (Italian for friend), probably inspired by its designer, who was himself Italian.
Yvonne de Gaulle, wife of General de Gaulle, drove an Ami 6. The vehicle inaugurated the Citroën plant in Rennes-La-Janais (France) while it was still under construction on 10 September 1960, a little over a year before its production began on site.
A rally named “Le Tour de Gaule d’Amisix” was held by Citroën, setting off from Rennes-La-Janais on 19 January 1966, with two standard Ami 6 station wagon models to demonstrate their endurance and road qualities. At the finish line, 23 hours and 11 minutes later and guided by an escort, the team had covered 2,077 km at an average of 89.6 km/h.
In June 1963, Ami 6 was presented in the United States. The export model adopted four round headlights and reinforced bumpers.
Production location: Paris (France) from 1961 to 1963, Rennes-La-Janais (France) from 1961 to 1969. With Ami 6, Citroën inaugurated this brand new plant in Brittany, the brand’s first major decentralisation from Paris. Forest (Belgium) from 1961 to 1969. Catila (Argentina): continued production of the Ami 6 station wagon until 1971 (cars shipped in parts to be assembled on site).
1,039,384 Ami 6 vehicles produced in total: 483,986 Saloons (April 1961 to March 1969), 551,880 Estates (October 1964 to September 1969), 3,518 Entreprise (two-seater service estate, glazed and panelled versions).
On the last Ami 6 models, the brightness of the dial could be adjusted with a small knob that controlled a rheostat.
Today, an Ami 6 vehicle in good driving condition is evaluated at €5,000 and up.
It can also be given as a gift in 1:43 miniature form (€37), on sale from the Citroën Lifestyle store, in an Ami 6 1967 Saloon version, Typhoon Grey. 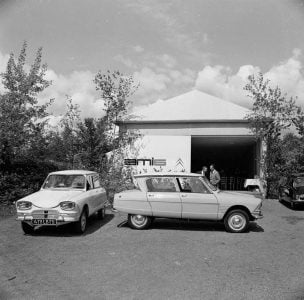