Most of us don’t know what the brand we are reviewing here today, till two years back. Within the last (almost three years now) this Japanese entry level brand has created a stir in the market by offering products in specific segments. A segment that has been ruled by the Indian giant manufacturer, Maruti in correlation with another Japanese manufacturer, Suzuki. Datsun is the word that we are looking at today and after two not so successful trial despite good products, the brand is up at it again to offer the market a shot redemption and make them realize what entry-level motoring should be like in a Japanese way. Despite the fact that we have been hooked to the Japanese manufacturer already. Products seems promising after all of this? Yes, it is. Let’s find out in detail then! 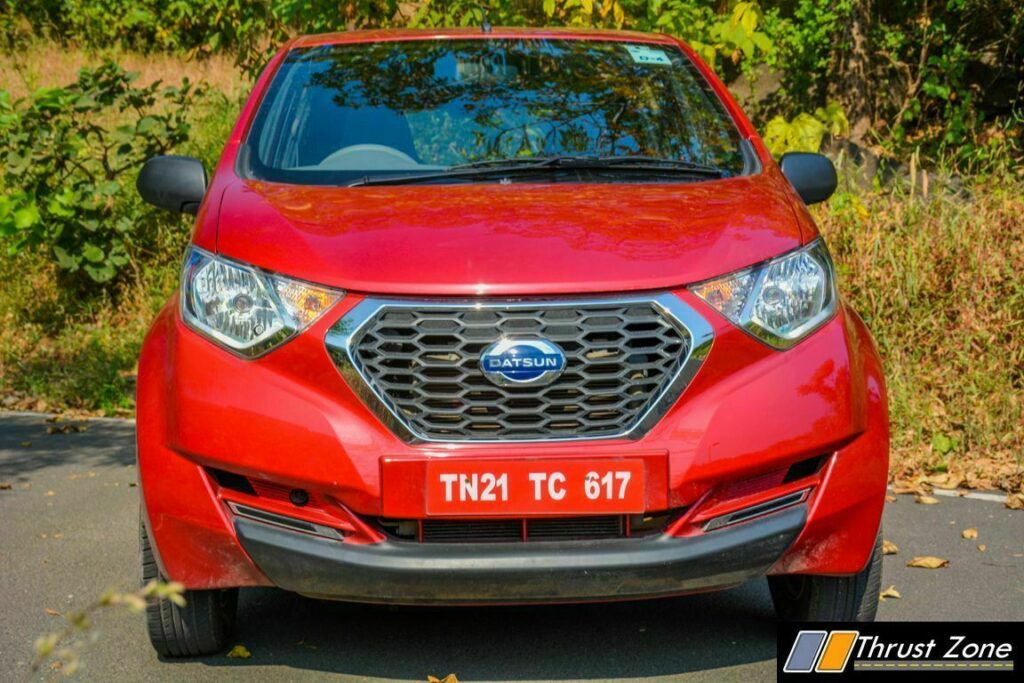 When it comes to the styling of this new small car, the design team has done a fantastic job with the front-end. As to that particular part is going to be shared with a lot of upcoming cars on the same platform. Something that is a trend too in the market today. The bumper has a cut away for the air-flow. There is a medium sized grill in the middle with a large Datsun logo in between which looks quite appealing. The headlamps in typical Japanese tradition are quirky and are wrapped around units which is a great addition in any car. There are DRL stuck to the bumper which add to the sporty quotient at twilight. The side profile is raised and the metal area dominates as there is little glass area. There is a strong line above the rear wheel arch which distinguishes the car very well. 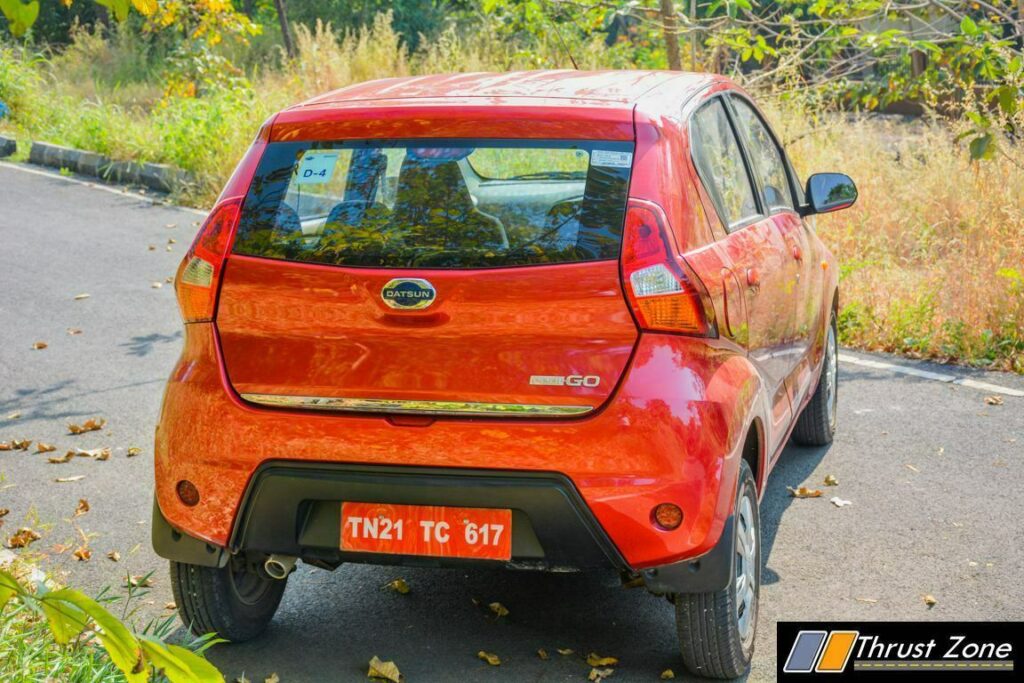 The rear has a similar case too. The tail lamps are large and despite vertical stacking they look quite modern and refreshing. The chrome strip and the molded bumper according to the design just falls in the right place. The wheel wells are large enough as this is a ‘micro’ crossover with raised suspension. Wheels just about the gap right. Overall, every aspect has been maturely designed and should continue in the market for a really long time without any major upgrades.

Interior is where the smartness of the execution can be seen. The cabin doesn’t feel cheap, the plastics are good by segment standards, the steering wheel is nice to look, feel and hold. The meters are something that will not age well but, they do the job by showing DTE and average fuel efficiency along with a single trip meter and an odometer provided with it. The entire cabin has exposed metal as the door pads on the inside are cut out to do so. This must have helped in cutting down on the weight and bringing flair in a rather different way in the cabin. The metal is also ribbed in the exposed areas. Fit-finish levels are good, but there is a lot exposed mechanicals and wiring the driver foot well where the pedals are, something that is almost too nasty to be ignored. 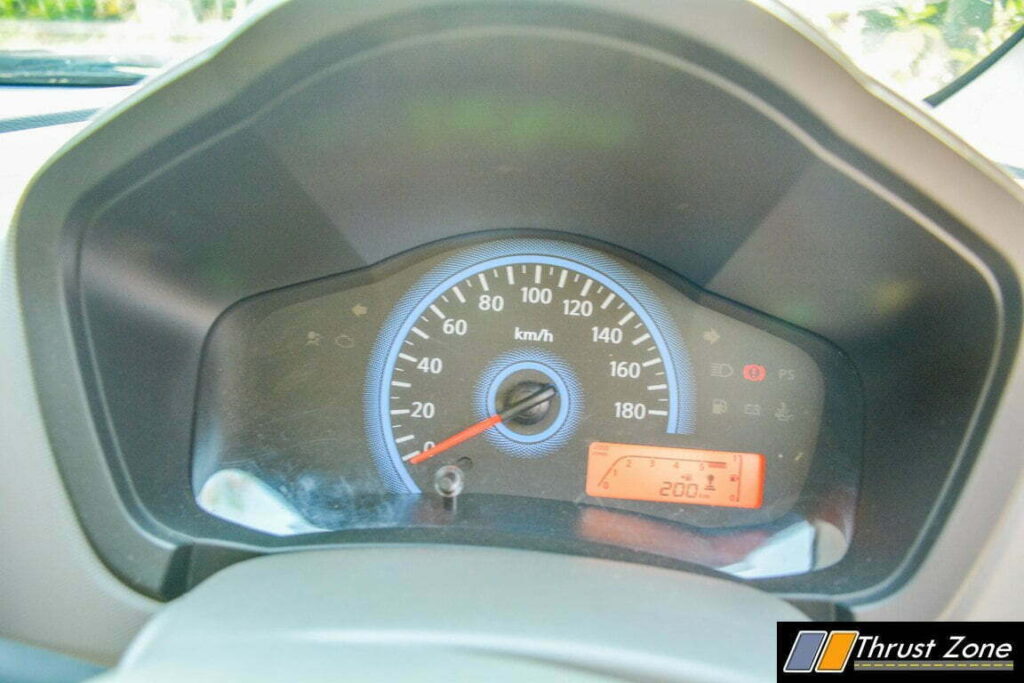 Dashboard layout is a very curvy and there a lot of storage areas because of that for the passenger and driver. The list includes a coin box in the right side and a couple of cup holders below. The features list isn’t the largest. You get power windows in the front for which the switches can be found below the gear lever.

The power window switches are wall switches and not regular switches that we see in normal cars. Something we saw in the recently tested Renault Kwid as well. There is a A/C, a single din music system which provides USB and AUX along with a CD player. 12V socket will help charging in today’s battery hungry smart phones. There are no adjusters on the inside for the ORVM’s, which is quite an omission that Datsun has chosen. Safety comes from a standard driver airbag. 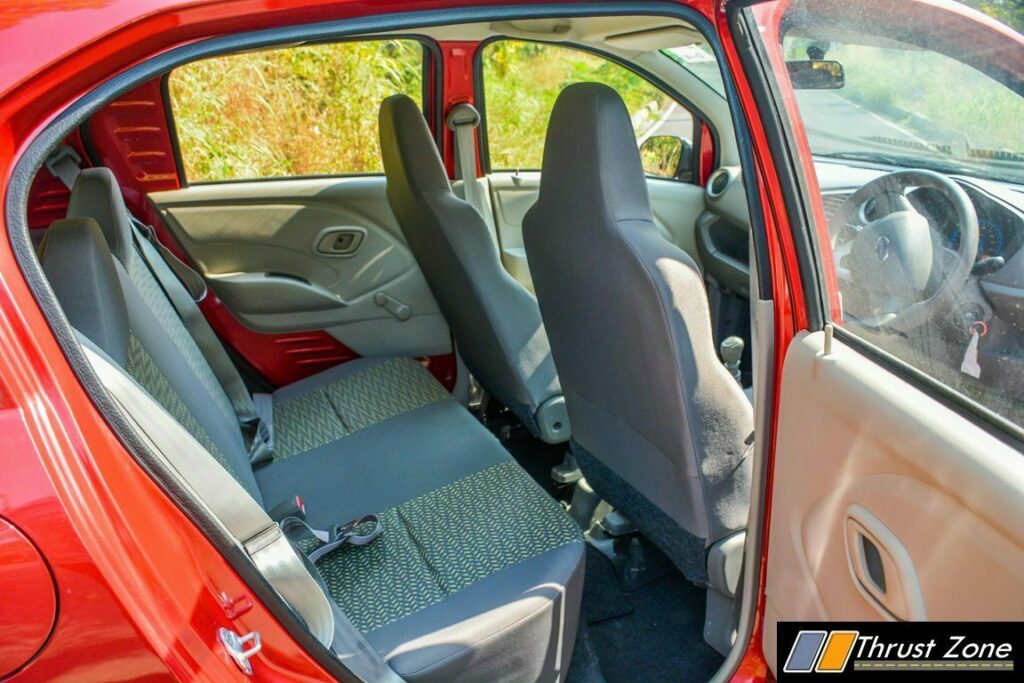 The seats are thin at the front, but they provide good overall comfort. Space in the front and rear is good and there is enough leg room and headroom for all body types. The seating position in the front is a bit awkward as the seat height is higher and steering is mounted a bit lower. The seat position is very upright, which makes you feel a bit cumbersome to begin with, but you get used to and enjoy good visibility all around. Overall, a good job we wish the seats at the rear were better and there was a little more creature comfort. If you do want more you will have to wait for limited edition or the current sport version that the manufacturer has recently churned out.

The 800cc engine makes 54 PS of power and 72 Nm of torque from its DOHC 12-valve 3-cylinder engine. The engine is smooth enough for a 3-cylinder unit, low-end torque is just about adequate but it is the mid-range where the hatchback shines. There is a good amount of top-end power too. Thanks to taller gearing the you can cruise at 90 km/hr on the highway if you want to. NVH level are good by segment standards and road/wind noise is well under control. 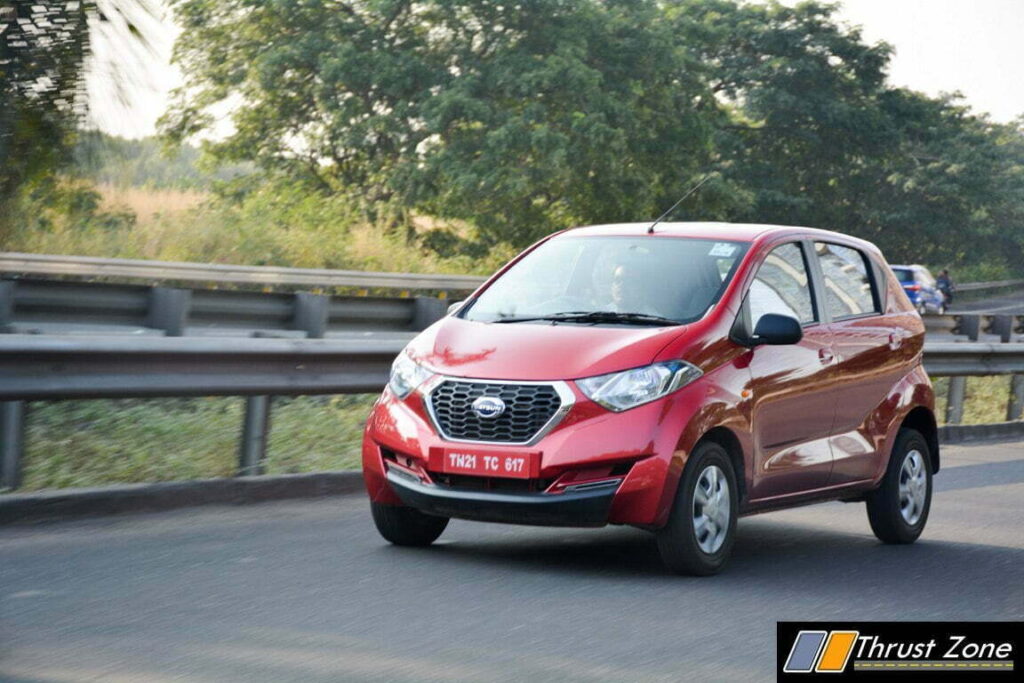 We got a fuel-efficiency number of a low 14.3 km/l in our testing, something that just included city driving and a bit of highway. The car can return more easily in better condition that we recorded the car in. Easily then it is an ideal city car thanks to light clutch, smooth gearbox and tight dimensions with a lively engine under the hood. 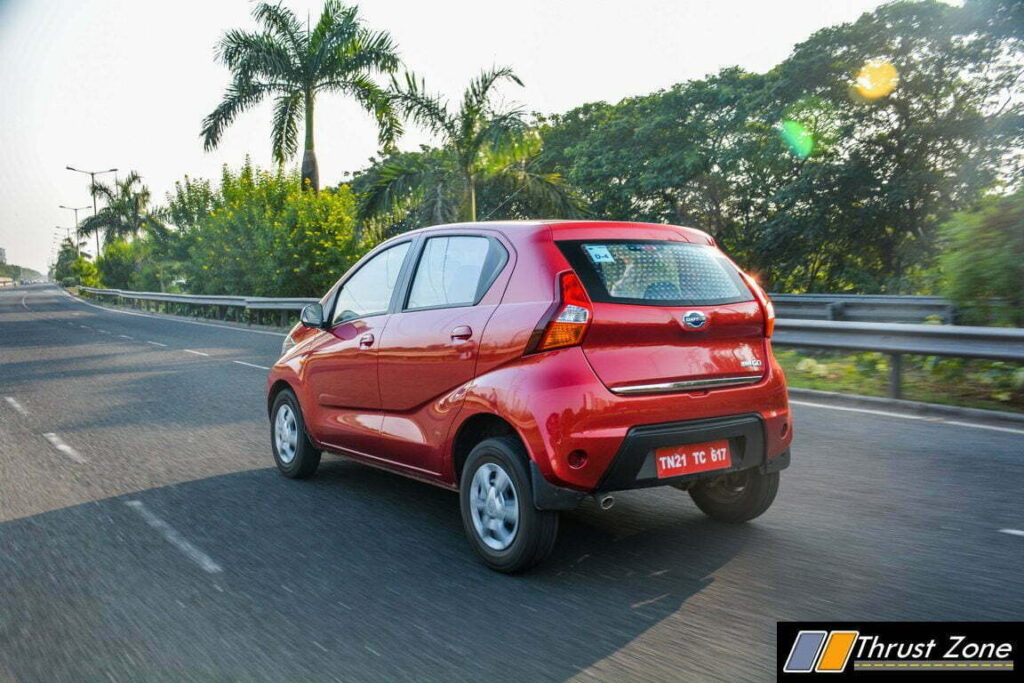 Based on the Kwid platform, the RediGo is set to impress but not exactly. There is the real good ride quality that we have seen on the Kwid that comes here, which is great for our broken roads. Extra ground clearance helps get over bad patches easily. The handling on the other hand is good, but there is body roll which is not as well controlled as on the platformed sharing car. The steering is very vague just like its counterpart, but is light and somewhat direct in its action. 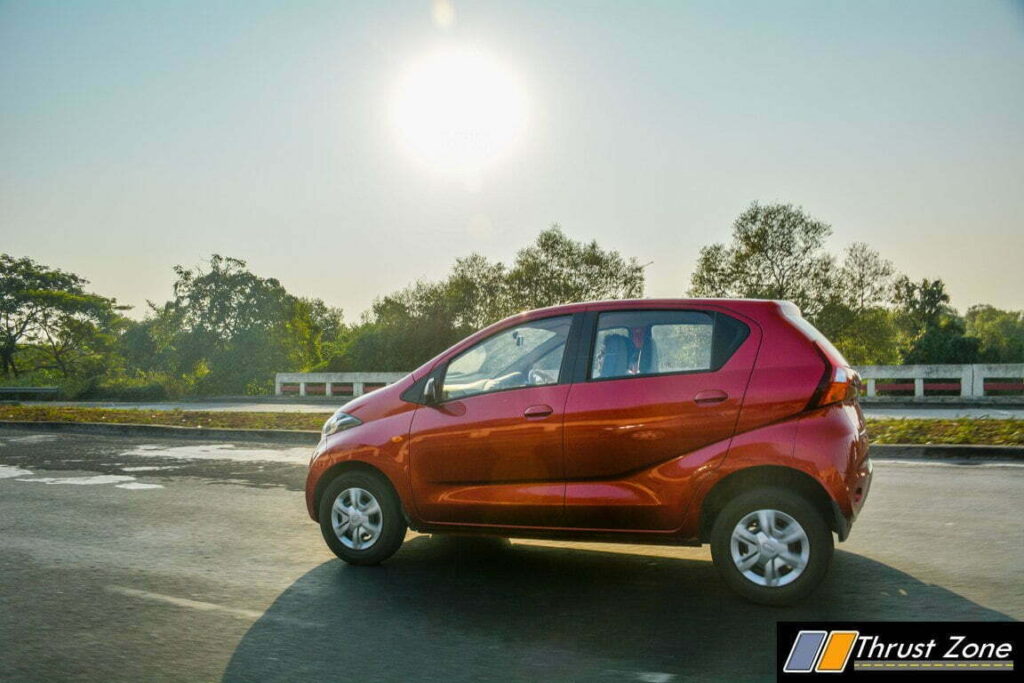 All of this mean it is easy to take u-turns in trundle around in town. Brakes are good at any given speed and do their job with good pedal bite and progressive braking power. ABS is still missing on this car. Tyres seem to do their job well and an upsize, just like the Kwid could make the car more potent in every regard. Overall, dynamics are still far away from perfect, but every car in this segment suffers from the same idea. Both these platform sharing cars still are surprisingly better their rivals very easily. 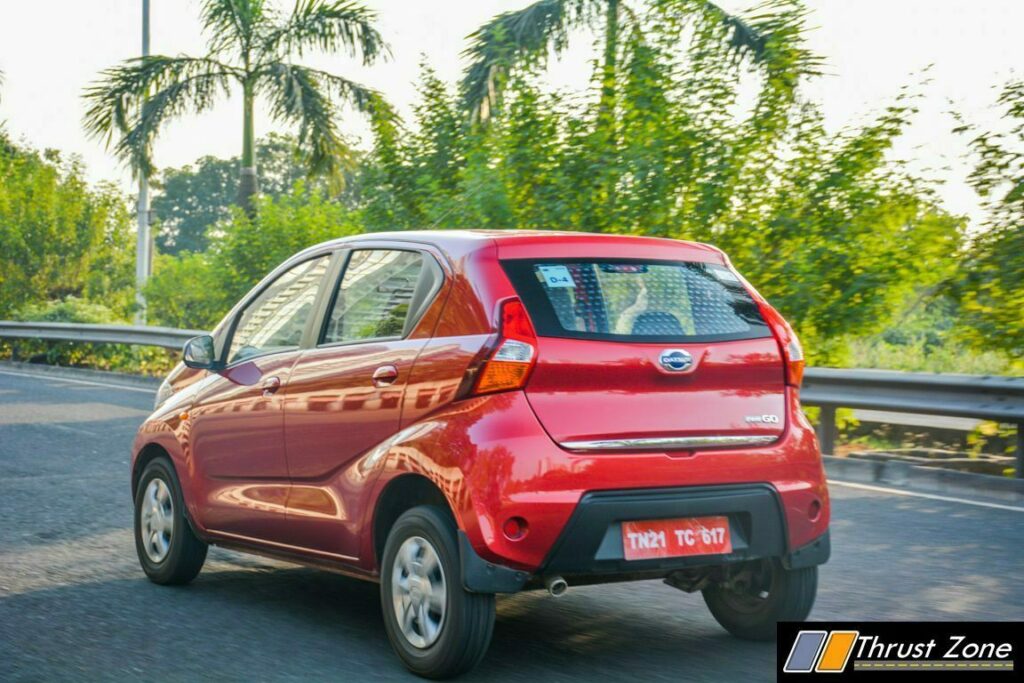 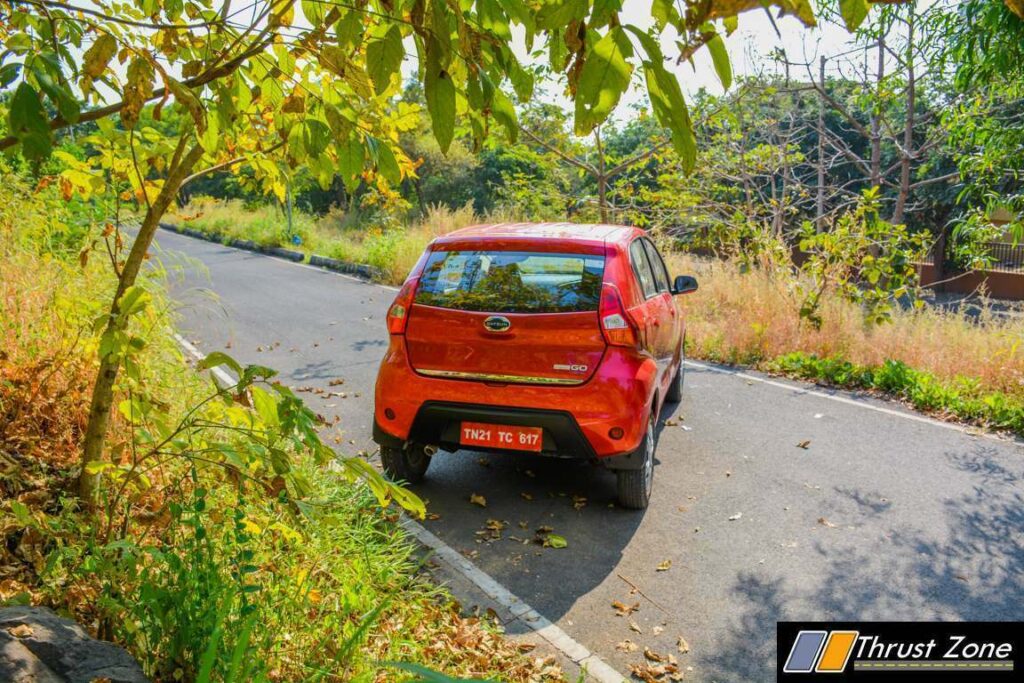 RediGO already shares a successful platform underneath that both partners have created. The tiny hatchback here is another addition to the stable which is as superior as other models already launched by Datsun. RediGO has the performance, the practicality and most importantly an unbeatable price tag that it carries. With the ‘micro’ crossover styling and something new to offer in the A-Segment category, the RediGo is already doing well and this could be the next big thing for the brand Datsun in the long run. 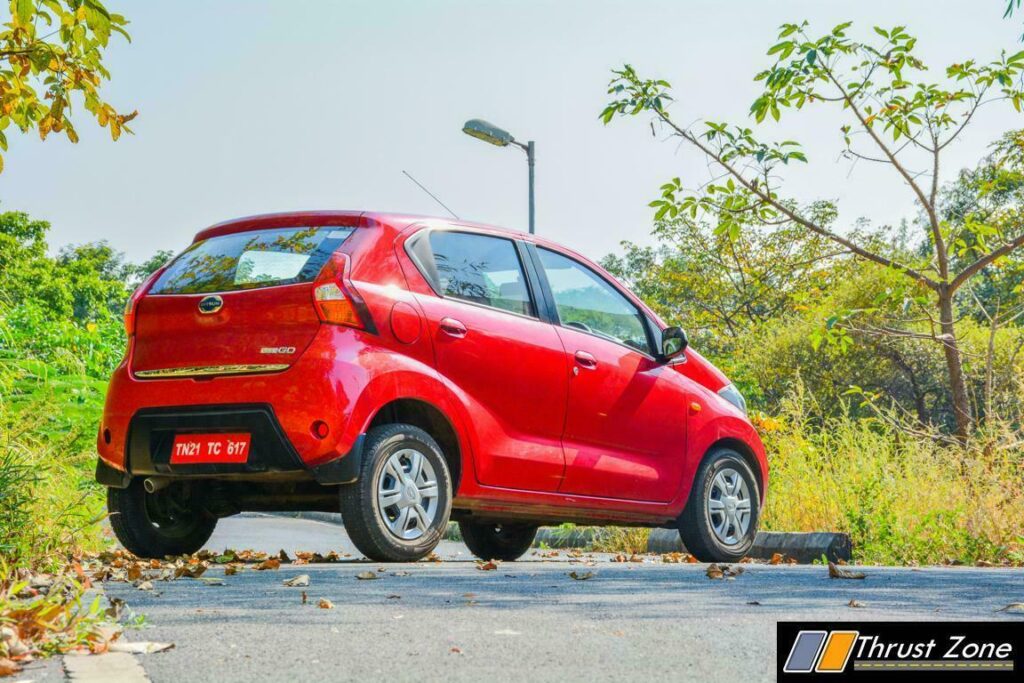 Price for Datsun RediGo Plus